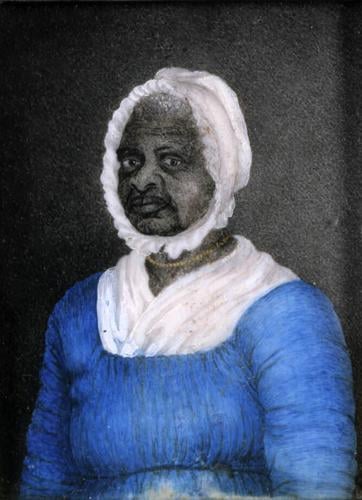 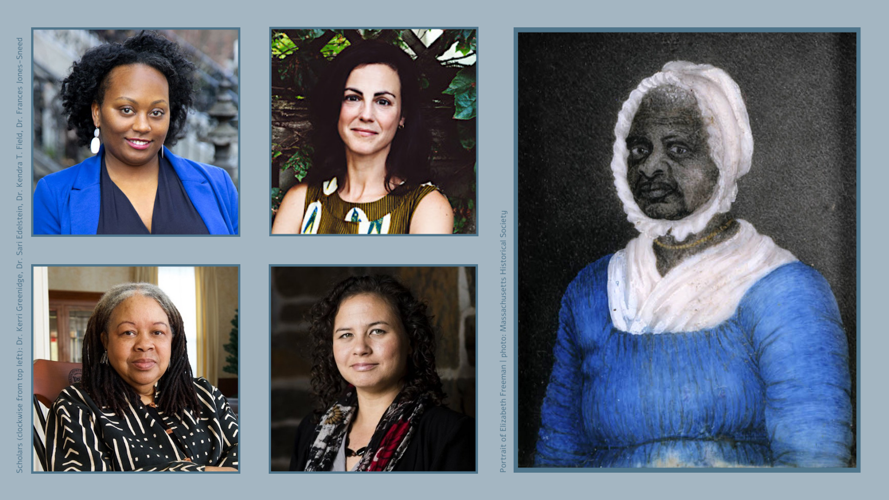 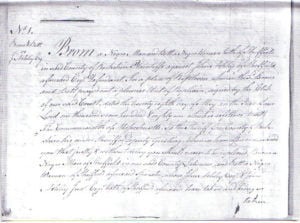 One of the court documents from Elizabeth Freeman's lawsuit for freedom. 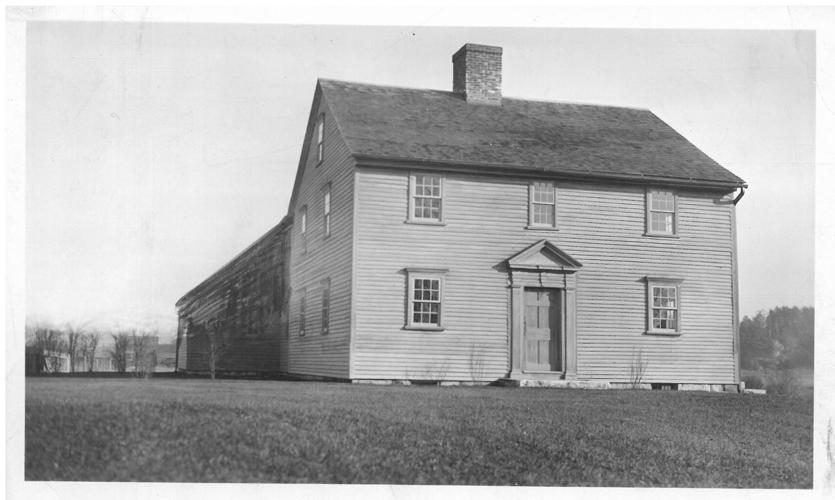 SHEFFIELD — The woman who sued her enslaver and won her freedom is still stirring much celebration.

“We’re trying to get all the stories out there. And all the stories that we tell — they all have a glitch in them." Wray Gunn, board chair, W.E.B. Du Bois Center for Freedom and Democracy

But Elizabeth Freeman’s legacy in the Berkshires has also sparked soul-searching and reflection about how Black history is told — and who tells it.

These themes will flow through public events this weekend dedicated to the life of Freeman, beginning Friday, when four scholars will explore “The Telling of Black Stories.” They’ll look at the myths and realities of Freeman’s life as a way into a discussion of the ethics of African American public history.

Sunday will feature the 12th annual “Walk to Freedom” from the Colonel John Ashley House, where Freeman had been enslaved, to the center of Sheffield.

Following this is the unveiling, on the Sheffield Green, of an eight-foot bronze monument of Freeman by New Jersey sculptor Brian Hanlon, known for towering work in bronze of figures including Harriet Tubman, Barack Obama and Jackie Robinson. The statue also bears words written by scholar Frances Jones-Sneed, professor emeritus at the Massachusetts College of Liberal Arts, who worked through the effort’s host committee to redesign it.

Go to sheffieldhistory.weebly.com. for more information

Former Massachusetts Gov. Deval Patrick, who with his wife, Diane Patrick is an honorary member of that committee, will officiate. Other luminaries from the Berkshires’ Black community will also attend and participate in the ceremony.

Patrick said Freeman’s legacy captures so much that is important about American and Black history. He noted the recent attention to the life of Revolutionary War patriot Agrippa Hull, and growing honors of civil rights visionaries W.E.B. Du Bois and James Weldon Johnson.

“It’s really fun seeing the Berkshires rediscover and acknowledge its Black side,” he said, adding that Freeman’s legacy also reflects on what is good in the heart of the nation’s founding, “when the [court] system works the way it’s supposed to.”

“Elizabeth Freeman’s example is an affirmation of the enduring nature of the best American ideals, and the fact that the courts took those ideals seriously is also affirming,” he said. “I feel like that’s a pretty powerful reminder at any time but especially nowadays.”

It was in 1781 at the Inferior Court of Common Pleas in Great Barrington — now Town Hall — that a jury heard Freeman’s case, filed under her enslaved name of “Bett” by lawyer and abolitionist Theodore Sedgwick.

An enslaved man known as “Brom” joined the suit, which hinged on a declaration in the state Constitution that said “All men are created free and equal.”

The jury found in their favor, and the case set a precedent that would essentially end slavery in Massachusetts.

“Bett” changed her name to Freeman and went to work as a servant in Sedgwick’s Stockbridge home. She later bought land in Stockbridge near property owned by Agrippa Hull.

While the court record is clear, there is little documentation about Freeman, who never told her own story. It was instead interpreted through her white employer’s lens and fictionalized over time.

Dr. Sari Edelstein, an associate professor of English at the University of Massachusetts, Boston, has written about this issue as an example of ethics in Black history. She’ll be part of Friday’s roundtable presented by the W.E.B. Du Bois Center for Freedom and Democracy.

Edelstein says the need for a “celebratory national story” has created simplistic narratives that use Freeman’s legacy.

“And yet, Freeman’s story is more complex than such accounts allow, and the instrumentalization of her life narrative raises questions about the stories told in the absence or suppression of archival material and about how narrative serves as one tool among many for the containment of black lives, even those that are celebrated,” Edelstein wrote in “Good Mother, Farewell: Elizabeth Freeman’s Silence and the Stories of Mumbet,” an article published by the New England Quarterly in 2019.

It is this, in part, that sparked friction at the outset of the effort for the monument, when organizers hadn’t initially sought guidance of the Black community in decisions about where to place the monument and what it should say, as well as choosing a sculptor.

Dennis Powell, president of the NAACP branch in the Berkshires, had expressed larger concerns in a February Op-ed in The Eagle about this and two articles about Freeman that did not include Black voices.

In an April interview about an effort to name a street after Freeman, he explained why he had qualms about the monument and other elements of the Sheffield effort, which include an essay contest for high school students. This year’s winner will speak at the unveiling.

“We weren’t brought to the table early enough,” he said, referring to the Black community.

While Powell, Jones-Sneed, Multicultural BRIDGE founder Gwendolyn VanSant and others did come on board, Powell also worried about where the monument would be placed.

“The location is where two Black Lives Matters signs were vandalized,” he said, referring to a 2020 incident that never was resolved. “Why not Stockbridge — that’s where she chose to live as a free woman, that’s where she’s buried. Why Sheffield?”

This is some of the complicated territory Friday’s roundtable aims to explore.

Dr. Kendra Field, associate professor of history at Tufts University and historical advisor to the Du Bois Center, said it isn’t a coincidence that the roundtable will tackle this sort of ethics problem.

“That’s what this event is about, and also it’s about paying attention to what the historical record shows and what descendants might know, and bridging that space in between,” said Field. As co-director of the African American Trail Project, Field’s work frequently brings her into contact with these questions during memorialization efforts.

“Whenever we’re talking about memorials and memorializing, we’re almost always dealing with the question of storytelling and silences and who is doing the remembering,” said Field.

Stories with ‘a glitch’

The office of state Rep. William “Smitty” Pignatelli, D-Lenox, spearheaded the monument and essay contest in a collaboration that includes the Sheffield Historical Society.

Pignatelli said the hope was always to “put [Freeman] on a pedestal” and memorialize her history. He also believed the attention on Freeman would prompt more research into her life.

Pignatelli said he is excited about the high school essay competition, whose annual prize is funded in perpetuity.

VanSant took on the essay project. Its $1,781 prize money — the amount marks the year Freeman won in court — will be split between the essay winner and two runners-up. The contest will be expanded next year from Mount Everett Regional High School to include all Berkshire County high schools.

Great Barrington will be home to the first Du Bois museum, legacy center in North America

VanSant said she agrees with Powell about the early part of the initiative.

“It’s an amazing, celebratory moment,” VanSant said. “The biggest learning here is that people begin to include underrepresented people early on rather than later. It was an imperfect start, but [the essay contest] was a really good opportunity.”

Du Bois Center Board Chair Wray Gunn, a descendant of Agrippa Hull, said he understands all reservations about how this went down, but supports the project and says he knows Pignatelli had the best of intentions.

“We’re trying to get all the stories out there,” Gunn said of Black history in the Berkshires. “And all the stories that we tell — they all have a glitch in them. We’re moving forward.”

Our Opinion: What we owe to history

History can be, at once, illuminating and hidden. That's not a contradiction but an indication of what history offers us and what is demanded of us if we are to meaningfully reckon with it. In that spirit, a slate of events this weekend will celebrate the life of Berkshire County historical icon Elizabeth Freeman. Those events include a play, a "Freedom Walk, a statue unveiling — and a conversation.

Her story has been told in books, a painting, and on the epitaph of her gravestone. But how much of Elizabeth Freeman's history do we really know?