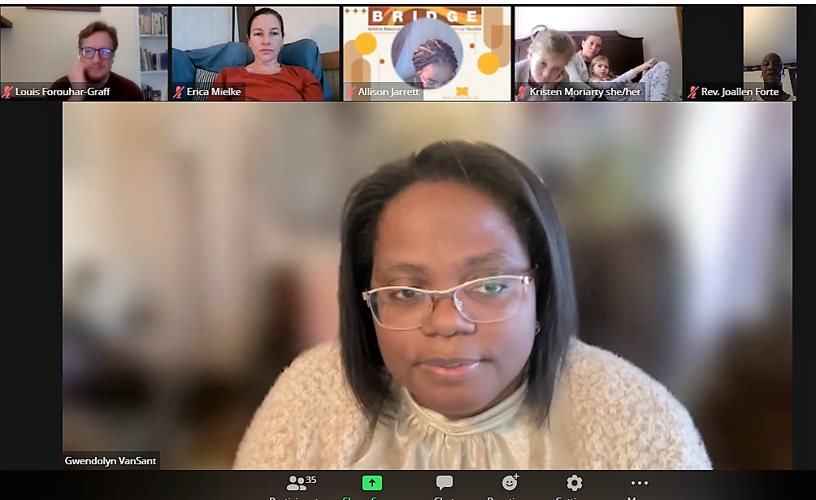 Gwendolyn VanSant, the chief executive officer and co-founding director of Multicultural Bridge, led a Martin Luther King Day of Service on Monday. Due to the weather, the program was forced to go virtual. 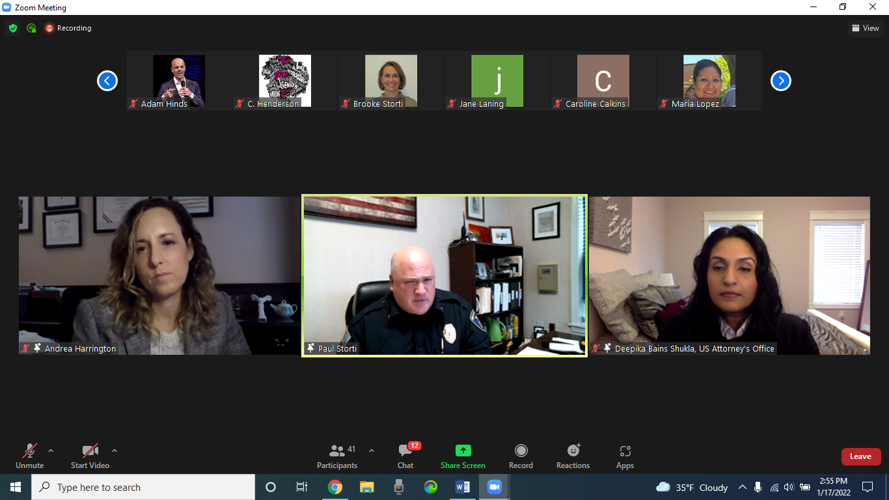 Gwendolyn VanSant, the chief executive officer and co-founding director of Multicultural Bridge, led a Martin Luther King Day of Service on Monday. Due to the weather, the program was forced to go virtual.

GREAT BARRINGTON — On the national holiday on Monday marking the birthday of Martin Luther King Jr., community leaders, civil rights advocates, parents and children gathered — virtually — all with a pivotal dream in mind.

“When we’re talking about Dr. Martin Luther King, what comes to mind, and it comes to all of our minds, is his famous speech where he talked about having a dream,” said the Rev. Joallen Forte, pastor of the Macedonia Baptist Church in Great Barrington. “But this morning, for just a few minutes, I want to talk with you not so much about having the dream, but living the dream.”

Forte was among the more than several dozen participants in the Martin Luther King Jr. Day of Service hosted by Multicultural Bridge, the Lee-based grassroots organization dedicated to advancing equity and justice. Icy road conditions scotched plans to hold the event in person at Berkshire South Regional Community Center.

In sharing thoughts on what King’s dream means today, participants expressed hope on the local front and concern on the national front.

Forte, for one, was hopeful by virtue of the many strides made in the community in recent years to put King’s values into practice. She highlighted Bridge itself, founded in 2011, and the efforts of inclusion made by organizations such as Berkshire South and her hometown law enforcement agency, the Great Barrington Police Department.

Living the dream, she said, entails building community bonds and engaging in self-sacrifice out of love for neighbor. By means of the gospel song “If I Can Help Somebody,” favored by King, Forte explained the actions needed to continue King’s dream. She sang:

If I can help somebody, as I travel along

If I can help somebody, with a word or song

If I can help somebody, from doing wrong

No, my living shall not be in vain

The event included service projects, such as making Valentine’s Day cards for elderly people, veterans and active military; packing backpacks with basic necessities for formerly incarcerated Berkshire women; and a food drive. Many children took part in the day’s events.

Participants also listened to a recording of King’s famous ”I Have a Dream” speech, which he delivered on Aug. 28, 1963, in Washington, D.C.

“Every time I hear that Martin Luther King speech, I come to tears with both joy, because how amazing he was, and today a lot of the tears were [because] we need him,” said Jane Lansing, a Bridge volunteer.

The participants noted the national holiday was held against a backdrop of some worrisome matters in the realm of civil rights. They pointed to efforts in some states to make it more difficult to vote and the gerrymandering of congressional districts.

Gwendolyn VanSant, the chief executive officer and co-founding director of Bridge, agreed that King’s speech is as galvanizing today as it was when it was first delivered. “But,” she said, “we really need to see that we are the solution. We have to do the work on every small community level to make the big waves of change that we need in our country.”

“I just want to encourage people that feel like ‘There’s nothing that I can do,’ ” Forte said. “It’s the smallest of things that you can do.”

Louis Graff, also with Bridge, said that he, too, has had similar feelings of “hopelessness and despair, thinking in national terms. … But I keep coming back to relationships as the big antidote,” he said.

“You gotta really want to understand people to be in this fight for civil rights,” said VanSant, who pointed to King as a model. “I see that in his grit and persistence and just his studying theology and just people. … I think he had to learn to love as well.”

The forum was considered a continuation of one held via Zoom a year ago.

Speakers expressed concerns about a range of issues, including building trust between citizens and law enforcement; the Berkshires’ increasing housing instability; racism in schools; and acts of hate — those that reach the level of crime and those that do not.

“It’s really hard, as somebody in law enforcement, to hear people all across the community say that they’re afraid to go to law enforcement for help,” said Harrington, “and we’ve worked to try to bridge gap.”

VanSant noted efforts, including in Great Barrington under Chief Storti, of institutions refashioning themselves to better reflect the cultural and ethnic diversity within the community.

“It really does make a difference and contribute to a sense of safety,” she said.

Noting the highly publicized murder by three white men of Ahmaud Arbery, a 25-year-old unarmed Black man in Georgia, Hinds said a reform bill he has helped spearhead would provide clearer definitions as to what constitutes hate crimes.

“Hate, unfortunately, is everywhere,” Shukla said. “So, you know, we just have to keep our eyes open, look out for each other and report what you see.”