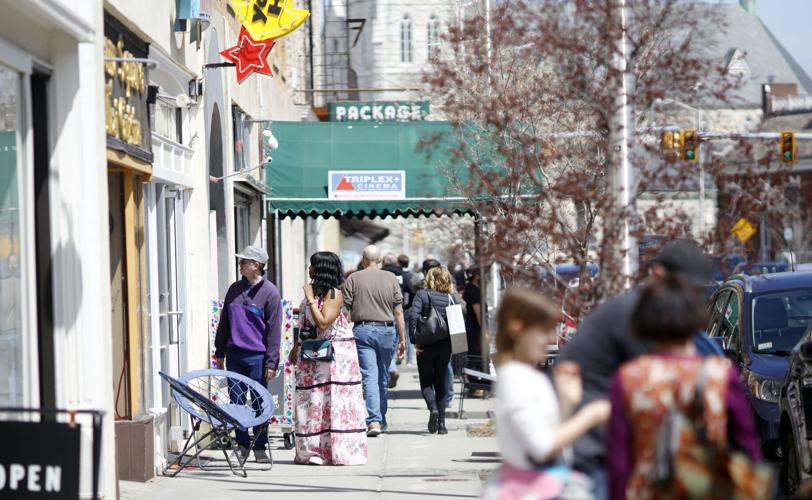 Great Barrington has become a magnet for visitors, and homeowners have found they can make money by offering their homes for short-term renting. Some town officials want tight regulations, and plan to use an outside vendor to monitor the rentals. 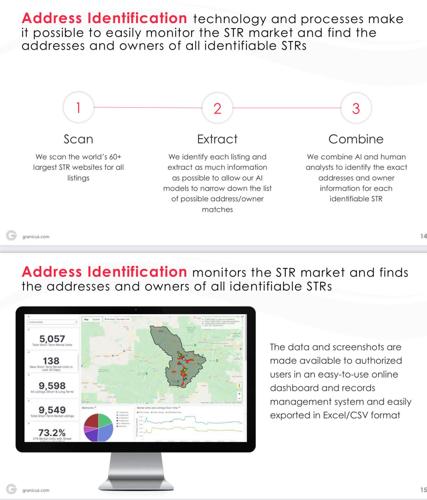 An excerpt of Granicus materials on the Town of Great Barrington's website. 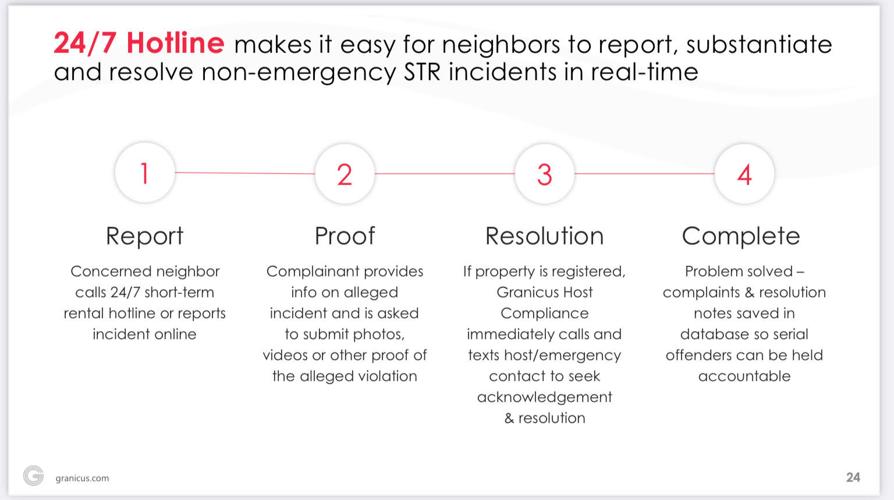 An excerpt of Granicus materials posted to the Great Barrington town website.

GREAT BARRINGTON — If voters on Monday approve a proposed short-term rental bylaw, Great Barrington plans to hire a digital services company to make sure people are abiding by the new rules.

The debate over the proposed bylaw has touched on oversight issues, including the possibility of surveillance by Granicus. The company estimates the service would cost the town $10,000 a year.

Granicus, a company that specializes in online government services, would compile data and maintain a hotline through which neighbors could report on neighbors, though the company says there are guardrails to prevent unfair or false accusations.

Perhaps because the planned data collection hasn’t been explained to residents in detail, this digital “Host Compliance” service is making some in Great Barrington nervous. Residents are preparing to vote at Monday’s annual town meeting on a proposed bylaw that would regulate rentals, as well as cap to 150 the number of days per year one can host renters.

A citizens petition with an alternate bylaw that regulates hosting, but does not cap rental days, will also be presented to voters.

The debate over the proposed bylaw has touched on oversight issues, including the possibility of surveillance by Granicus. The company estimates the service would cost the town $10,000 a year. 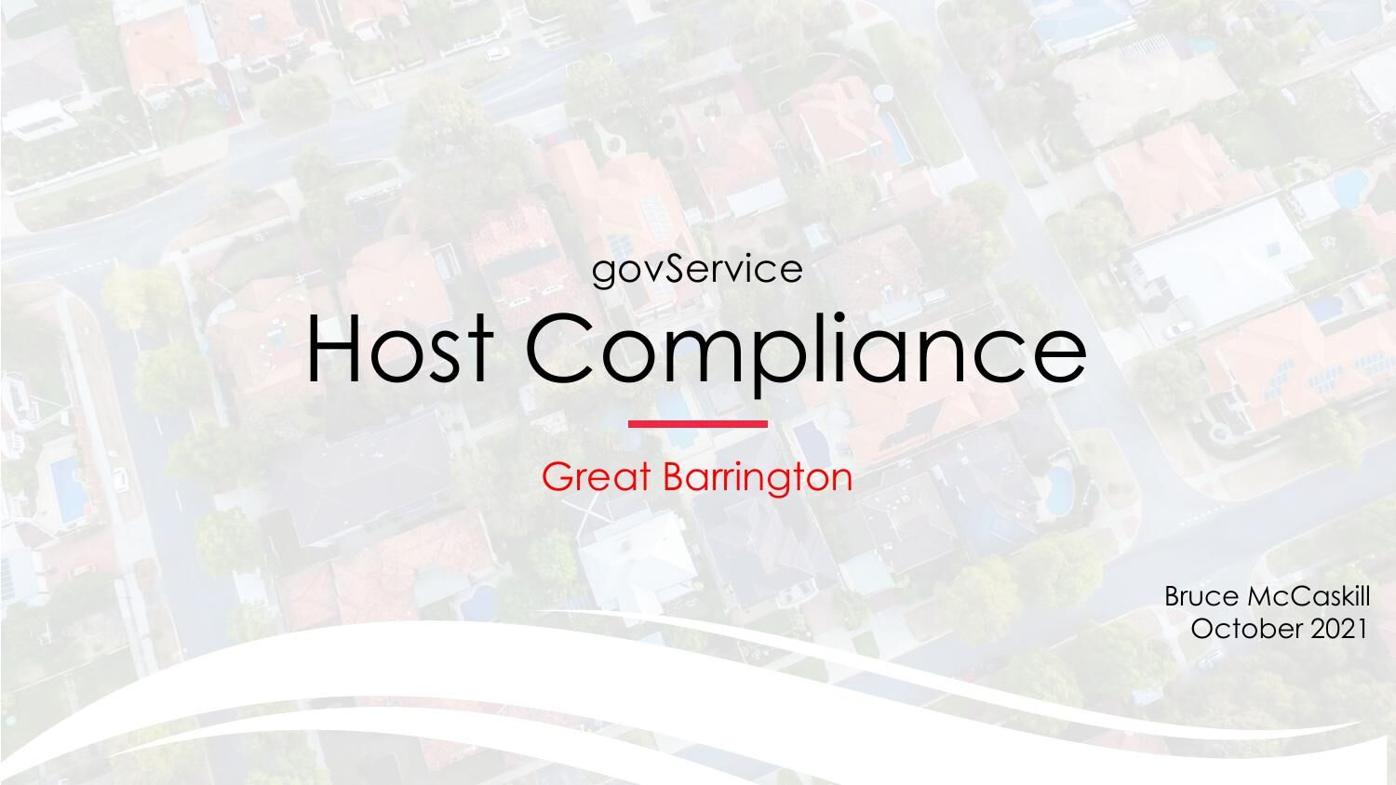 The town has not yet signed a contract with the firm, nor budgeted for it, said Town Manager Mark Pruhenski. He said town officials would need future voter approval for the funds.

Granicus’ clients include federal, state and local municipalities. The company says it helps more than 400 towns and cities manage oversight of rental hosts using web platforms like Airbnb and VRBO.

In Great Barrington, the number of active listings, as of Thursday, was 208.

Each of these, under the town’s proposed bylaw, would have to abide by a number of rules including registering with the town and paying taxes and fees. Hosts also would have to comply with safety and other regulations including noise, pets and garbage.

Granicus would streamline this. The company would make it easy for the town to send notices to violators, for instance.

Those backing the bylaw see it as a way to regulate rentals without overburdening Town Hall.

To do this, Granicus would mine data to match addresses and people and estimate rental activity.

“We combine [artificial intelligence] and human analysts to identify the exact addresses and owner information for each identifiable STR (short-term rental),” according to materials from Granicus on the town website.

What troubles a number of residents is a 24/7 hotline for “neighbors to report, substantiate and resolve non-emergency STR incidents in real-time.”

“Complainant provides info on alleged incident and is asked to submit photos, videos or other proof of the alleged violation,” the materials say.

Bylaw opponent and Select Board member Ed Abrahams, whose domestic partner began renting her house after moving in with him, isn’t a fan of the hotline — or the bylaw’s cap on rental days. He asked his fellow board members at a meeting last week, “Who’s got the burden of proof? And what’s the appeal rights and what’s that going to cost us?”

No one responded. Abrahams has been derided for calling this system “spyware.”

“If my next door neighbor were looking at my house and knew how often somebody was in it, how often I had company, whether or not it was somebody who was paying me, I would call that spying, and that’s [just] my neighbor,” he said.

Maureen Meier has a home in her close-knit neighborhood she offers on Airbnb, and says her neighbors are supportive.

She is in favor of regulating rentals so that the town has solid information to work with. But she opposes the cap on days as well as digital surveillance. Meier doesn’t like “the idea of my neighbors taking secret films of me or guests.”

“I don’t want to live someplace where people report on each other,” she said. “Neighbors talk to each other about concerns. I want the chance to have a face-to-face with them.”

The company has heard this concern before but has protections in place, said Laurel Anderson, Granicus’ vice president of Product Management, in an email.

Anderson suggests that the company’s complaint system would make it hard for neighbors to use the hotline against each other for reasons other than valid complaints.

Most complainants in many communities cannot be anonymous, Anderson added, and the rental host will be quickly notified of complaints and will have “the opportunity to acknowledge, resolve, and respond to hotline complaints against their property.”

Some towns in the larger region have hired Granicus, but none in the Berkshires. Red Hook, N.Y., is one. Town Supervisor Robert McKeon said he couldn’t offer a review because the town’s bylaw took effect June 1.

Next to Great Barrington, Lenox has the most active short-term rentals in the county, at 135, according to AirDNA. The Lenox town clerk oversees their registration.

“So far people seem to be getting along with the regulations that Lenox has passed,” Ketchen said. The bylaw was enacted in 2019. “We’re not looking to invade people’s lives — we’re just looking to create a standard for what’s allowed and what’s not.”

He said he doesn’t necessarily think hiring a company like Granicus is wrong.

“It never entered our stream of consciousness,” he said, noting that if there are problems in future, the town could consider something similar.