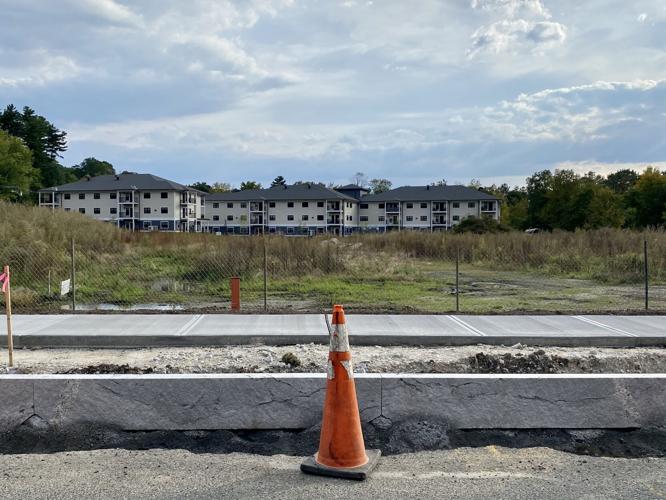 After the opening of the Bentley Apartments, pictured, in May, planners now turn their gaze to the the Bridge Street side of the equation, where new sidewalks are being installed by the town. Plans call for more affordable housing units. 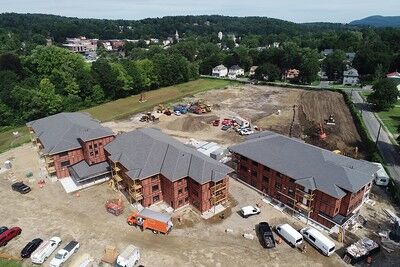 The Bentley Apartments, at 100 Bridge St. in Great Barrington, take shape on the banks of the Housatonic River last year. Now the developer is planning another affordable housing complex for the vacant lots shown above, that abut it.

A wait for state money, however, will likely delay the Bridge Street project’s completion for at least three years.

The Community Development Corp. of South Berkshire is designing what could become around 30 one- to two-family homes on two lots of a larger, 8-acre former industrial site along the Housatonic River, said CDC board Chairman Jim Harwood.

“It’s going to move at a very slow pace, unfortunately."

The development would neighbor the CDC’s Bentley Apartments, completed last year on the abutting lot, and feature significant open space, Harwood said. The riverfront area is set to be developed into a park-like area and the CDC plans to move the project along in the coming year. Open space will feature in any new construction.

“We would like to include workforce housing and homeownership,” Harwood said of the property at 100 Bridge St. “The project is intended to [be] moderate in scale and style, proportion and economics between the Bentley Apartments at the south end of the site and the surrounding neighborhood.”

The site, given the history of contamination with mostly dioxins, is monitored by the CDC’s environmental consultant and regulated by the state Department of Environmental Protection.

The CDC used a containment and partial soil removal approach to eliminate exposure to pollution at Bentley Apartments. The DEP signed off on the area’s safety and continues to require monitoring of soil and groundwater. A March 2 update filed with the agency confirms this.

The areas awaiting development are fenced off. To further reduce exposure, the earth is stabilized with a “soil tackifier” and vegetation, according to Ransom Engineering, the CDC’s environmental consultant, in documents filed with the DEP.

The Bentley development took two decades to realize after fits and starts with both remediation attempts and building concepts that fell through. Planning for the project comes at a moment when housing in town is scarce and unaffordable to many.

Harwood said while the new housing will be considered affordable, prices and eligibility aren’t yet known. “The town has gotten such a clear and loudly voiced need for workforce housing and we’re trying to help address that,” he said.

The CDC is working on early designs with Nick Elton, of Nick Elton + Hampton Architects of Boston, which has partnered with the CDC on other affordable housing complexes. Harwood said the CDC may also partner with Berkshire Housing Development Corp.

The new Bridge Street complex would have a different feel than the Bentley units and knit together Bentley with the surrounding neighborhood.

“Where the Bentley buildings feel like apartment buildings, these will feel more like one- and two-family residential scale, though they might be attached buildings,” Harwood said.

One guarantee is the “geologic” timeline of state-funded projects. The wait could be as long as five years for a finished product.