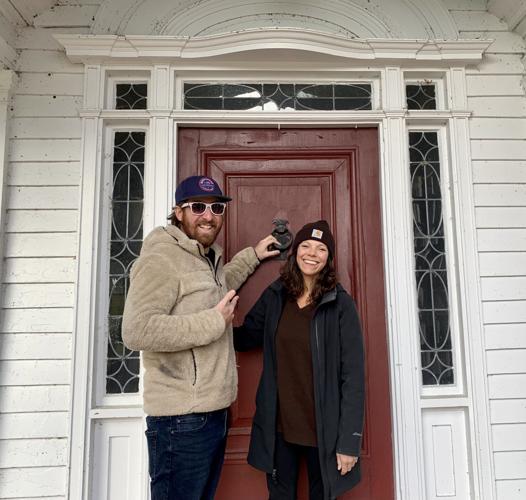 Josh Irwin and Leigh Davis have a laugh at the Windflower Inn in Great Barrington. Davis helped bring Irwin's idea for workforce housing at the inn to fruition when he struggled to buy the property. 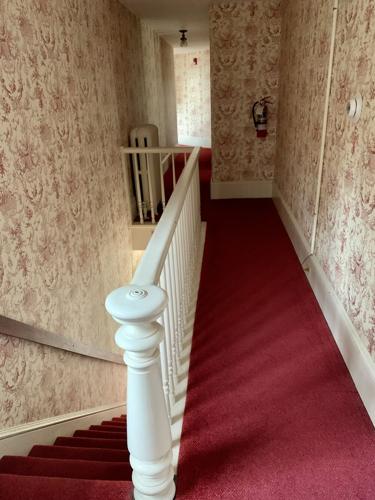 An upstairs hall at the Windflower Inn in Great Barrington. 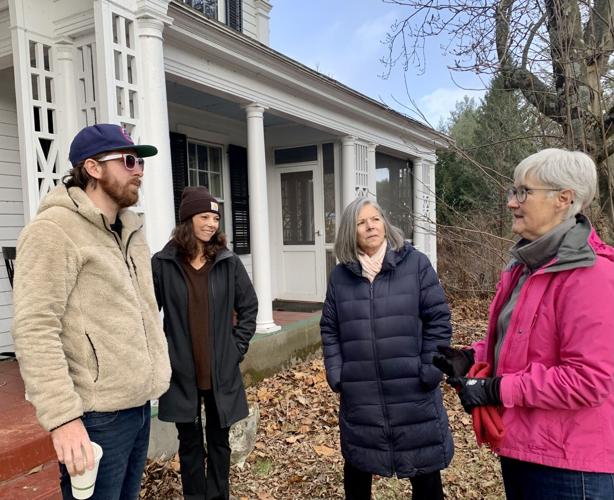 From left Josh Irwin, Leigh Davis, Construct Inc. Board President Elizabeth Rosenberg and Jane Ralph, Construct's executive director. The group met outside the Windflower Inn in Great Barrington Thursday, the day Construct closed on the inn to convert it to shared workforce housing. 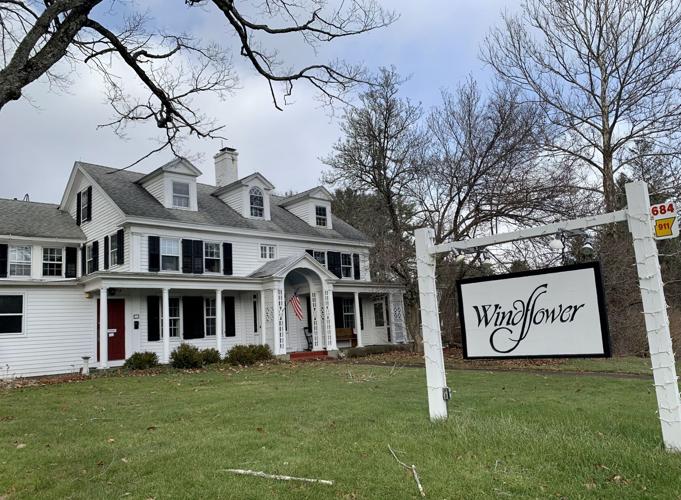 Construct Inc. closed on the inn Thursday. The nonprofit plans to open the inn to workers who need temporary housing to solve a staffing shortage and housing crisis in the area. 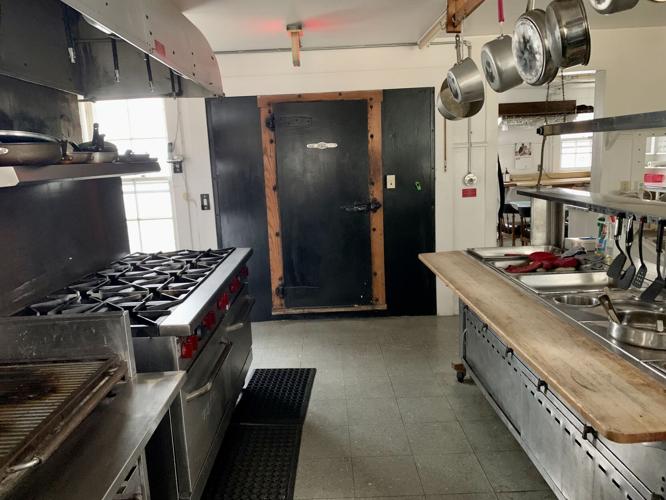 The Windflower Inn's kitchen. Construct hopes in future the kitchen could be used for programs or a commercial kitchen.

GREAT BARRINGTON — Restaurateurs Josh Irwin and Mark Firth were having a beer together when they decided that new ventures for themselves or others would have to involve solving the staffing problem.

“This is by no means the answer - this is just one of the steps that needs to be taken to allow a better Berkshires to develop. It’s so far back in the chain of events that needs to happen and yet so vital to what everybody wants to happen, which is booming business, lower prices, great places to work, people maintaining their relationship with the community and being involved in the community.” Josh Irwin, restaurant owner and chef

Which means they’d have to first solve the housing problem.

“Constant issue,” said Irwin, and chef and farmer who owns Cantina 229 in New Marlborough with his wife and is co-owner of Mooncloud on Railroad Street.

The two started talking to architects, scouring real estate listings for land or any other possibility that could result in the construction of row houses or tiny homes for worker housing.

“We were looking selfishly,” Irwin said, though he admits he is deeply community-minded. “Around 60 to 100 or more rooms are needed to keep up with the economic growth that’s happening.”

The high cost of buying land and new construction made them wince.

“The economics of these projects don’t work,” Irwin said. “There’s going to have to be an enormous amount of charity in this,” he said he began bluntly telling people.

One of Irwin’s visions will be realized this month when affordable housing nonprofit Construct Inc. stepped in to buy the Windflower Inn to convert it to shared temporary housing for workers. Construct sealed the deal on Thursday.

It was a long road. As Irwin and Firth searched for properties and land, Irwin spotted the 20-bedroom, 17-bath Windflower Inn on Zillow for about $1.7 million. He alone went for it, finding the price tag substantially less than building new.

He envisioned a co-living arrangement for workers either moving to town or already here and struggling to find any rental let alone one they can afford.

In Great Barrington, people are paying a lot more for houses than the town says they’re worth

Irwin went under contract for roughly $1.4 million, but a number of contingencies and financing roadblocks began to spike the deal in the spring.

“The people generous enough to invest in the project were being put through a number of ropes and whatnot,” Irwin said. “We met with every bank looking for the support but we didn’t have the institutional backing.”

Enter Leigh Davis and Construct, her employer. Then add a sprinkle of serendipity.

Davis, vice chair of the Great Barrington Select Board, has made it her mission to solve the town’s housing crisis, having this year fought a battle against short-term rentals.

Davis is chair of the board’s housing subcommittee, to which Irwin came and discussed his workforce housing vision. She later learned from longtime resident and economic development champion Steve Picheny that Irwin’s Windflower deal was “on the rocks.”

“The stars were aligned,” Davis said, noting it was the inn where she stayed when she first moved to town from Ireland. “The world stopped. I said to Josh, ‘Please let me pitch this to Construct.’”

She did and its board unanimously said yes. Construct stepped in for Irwin. It resulted in a 3.25 percent interest rate from Greylock Federal Credit Union — made possible from federal pandemic relief funds to the bank, said Jane Ralph, Construct’s executive director.

The purchase also was funded by a “significant” grant of the town’s COVID relief money and a slew of individual and other donors — including $75,000 from the Jane and Jack Fitzpatrick Foundation.

Construct closed on the inn Thursday, at the same price Irwin had negotiated. It will be ready for occupants in January.

Ralph says the temporary, shared living concept in existing space is a first for Construct.

“It’s a way to house people quickly and without [them] having to get a one-year lease,” she said.

Potential tenants will have to go through the same income qualifying process as other Construct tenants, and five rooms will be reserved for those who would qualify for low-income housing as well as Great Barrington residents, Davis said.

The property on Route 23 near Egremont has 10.5 acres and also two cottages with several rooms each. It was sold with most of its furniture and kitchen equipment.

“It’s pretty much ready to go and that was a big deciding factor,” Davis said. “We didn’t have the money to outfit and equip the inn.”

Davis referred to it as a pilot program to test the idea of shared living.

“Now there’s a room you can stay in until you get your feet wet,” she said.

A room with a red carpet. “It’s not updated,” Irwin said of the inn, built in 1850. “It’s old school and spooky and there’s red carpet everywhere.”

Stockbridge home values soar again. What will the tax impact be for property owners?

But it is a big deal — a big first — for the community. It’s a new thought to solving a crisis that began even before the pandemic.

Irwin says the inn purchase is not nearly enough to solve the greater problem.

“This is by no means the answer — this is just one of the steps that needs to be taken to allow a better Berkshires to develop,” he said. “It’s so far back in the chain of events that needs to happen and yet so vital to what everybody wants to happen, which is booming business, lower prices, great places to work, people maintaining their relationship with the community and being involved in the community.”

His mind is still turning with ways workers could feel inspired and excited by housing that captures the beauty of the Berkshire “lifestyle.” He still has visions of those tiny homes and nice new row houses.

Maybe that’s next. Irwin had to flex different muscles to make this one happen.

“We just wanted to make sure adequate things were being taken advantage of, which requires time, money and power, and I felt like I had a portion of all three of those things but not all of them.”

Our Opinion: A workforce housing project in Great Barrington is a unique prototype to keep our eyes on

With some luck, it could be a game-changer — not just for South County working-class residents and businesses but as a potential prototype for housing-minded stakeholders in other communities.

Another grand old building to be converted to workforce housing. This time in New Marlborough.

Cantina 229's owners are saying "farewell to 8 years of taco Tuesdays" and so much more.

Great Barrington is looking at tax breaks for those who rent at affordable rates. Provincetown is already doing it

While it isn't clear how an affordable housing rental exemption might work in Great Barrington, Provincetown has been doing it since 2004. It provides an example of how to calculate the exemption based on how much square footage of a home or apartment is being rented.