GREAT BARRINGTON — An abutter and a couple who live near this town’s airport are fighting a decision that went in the facility’s favor.

The Zoning Board of Appeals did not force a cut to operations that would essentially shut the Walter J. Koladza Airport.

Abutter Holly Hamer, as well as Marc Fasteau and Anne Fredericks, have taken their case to state Land Court with a complaint filed last week against the ZBA.

In it, they say the board did not properly analyze legal precedent that should stop any expansions or functioning that exceeds what it was in 1932, when it was mostly a landing strip on a former potato field. 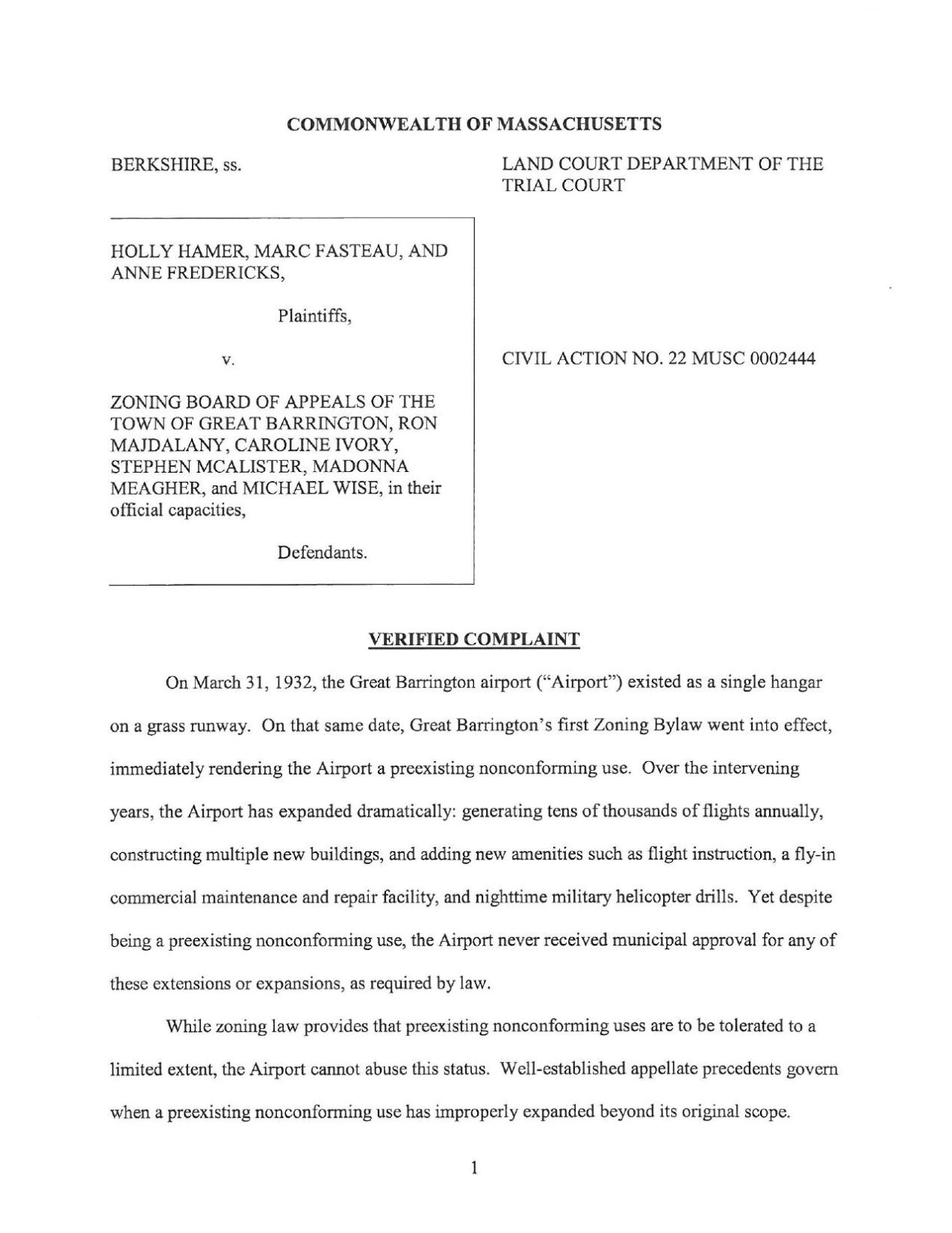 The town enacted its zoning laws that year, and the airport was suddenly sitting in what was zoned a residential area. Had the airport not already been there, it wouldn’t have been allowed in that spot. The “preexisting nonconforming” business is allowed by law to continue.

The complaint asks the court to force the airport to stop using any post-1932 buildings without approval from both the zoning and select boards.

The neighbors say the board’s decision must be overturned “as a matter of law,” since there is no denying that airport operations have increased since 1932 without any permits.

“The Zoning Board’s decision was entirely unsupported by the evidence, exceeded its authority, and must be annulled as a matter of law,” the complaint says.

Dennis Egan, attorney for airport owner, Berkshire Aviation Enterprises, could not be reached for comment.

During deliberations last month, board members had pointed to historical evidence of enough aviation activity at the airport 90 years ago to make their case that its operations could legally continue.

The neighbors, however, wanted to turn the clock back 90 years. Last fall they first challenged the airport’s activity level with the building inspector, who said he did not find it in violation of zoning laws.

Before the neighbors appealed the building inspector’s decision to the zoning board, the airport applied for town approval to raze and rebuild the 1950s-era office. That plan is still underway.

One abutter and two neighbors of Walter J. Koladza Airport in Great Barrington are challenging the legality of the airport and its operations. The airport's attorney says they want to "regulate it out of existence."

The turmoil began in 2017 when the airport wanted to build new hangars to get the small planes off the grass and to generate income. The neighbors fought the proposal and the Select Board ultimately denied a permit in 2020 amid concerns that it would change the character of the neighborhood.