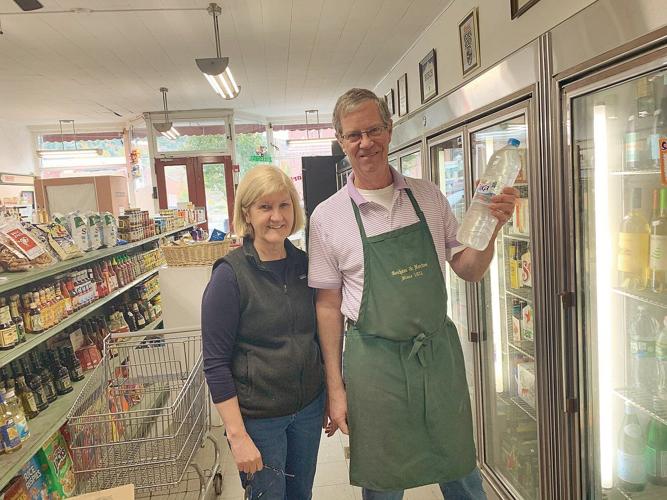 Diane and John Tracy, owners of Gorham & Norton grocery in Great Barrington are in contract with Community Development Corp. of South Berkshire. The CDC wants to buy the Marble Block on Main Street to preserve eight rental apartments on the upper floors for affordable housing.

The sellers of the historic "Marble Block" on Main Street in Great Barrington are under contract with the Community Development Corp. of South Berkshire. The CDC wants to buy the building to preserve its eight apartments for affordable rentals. 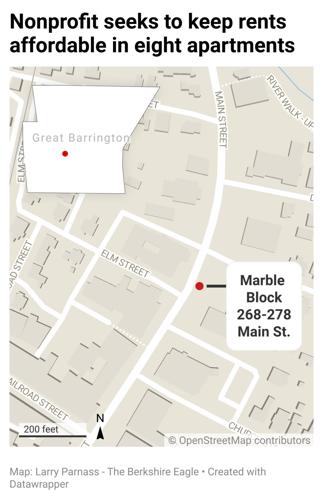 GREAT BARRINGTON — A nonprofit that develops affordable housing is under contract to buy a Main Street building to preserve low rents for the eight apartments upstairs — now and into the future.

But to buy the $2.25 million “Marble Block,” the Community Development Corp. of South Berkshire must raise $1 million by the end of the year.

That $1 million will go towards the purchase, as well as stabilizing rents for the 10 existing tenants and to cover needed upgrades.

The CDCSB plans to mount a fundraising campaign and will also ask the town’s Affordable Housing Trust to devote $100,000 to the purchase. Remaining state tax credits will also help. That program will give donors of $1,000 or more a 50-percent state tax rebate.

If all goes according to plan, the nonprofit will close the deal Jan. 23.

While the CDCSB hopes to maintain preference for local rather than out-of-area tenants in future, that will depend on the type of state funding, said Carol Bosco Baumann, the corporation’s executive director.

She said much of the state’s financing comes with strings attached. One is that income-qualified potential tenants from out of the area can get ahead of local ones in line for an apartment.

“Not being able to give local preference is definitely an impediment,” Baumann said of solving a housing crisis specific to Great Barrington and South County.

The historic block at 268-278 Main St. has six commercial spaces at street level – one is empty. Those include the David Gavin hair salon, the law offices Campoli, Monteleone & Mozian P.C and longtime grocer Gorham & Norton, Inc., whose owners John and Diane Tracy are selling the building.

John Tracy said he’s not ready to comment on the sale, and that he’s not closing shop anytime soon.

The plan comes amid a housing crisis in town and across Berkshire County that worsened during the pandemic and has hit families and workers even harder amid inflation.

Rentals are scarce and expensive, and renovations or new construction downtown usually results in rents local workers with a range of income levels can’t afford.

Change is coming to the historic Mahaiwe Block in Great Barrington. Rents will be going up

Baumann said the CDCSB is trying to prevent a high-end conversion of the Marble Block apartments that would further lock workers out of housing.

“The main reason we’re doing this is because we want to preserve naturally occurring affordable housing,” she said. “It’s exciting to us. It’s important to us. We want to diversify our housing portfolio.”

The building was designed by Pittsfield architect Joseph McArthur Vance and built in 1902. Vance’s designs include what is now called the Mahaiwe Performing Arts Center and Bascom Lodge on Mt. Greylock.

In Great Barrington, people are paying a lot more for houses than the town says they’re worth

The CDCSB’s completed affordable and low-income projects include the Bentley Apartments off Bridge Street, plus three others in Great Barrington and one in Stockbridge. The Windrush Commons complex off South Main Street will be completed between spring and summer.

The Bentley Apartments has a waiting list of 300 people across the state, Baumann said. Windrush in early November had 85 applications.

She said she hopes to explore with state officials the importance of giving people who live and work in town and other nearby communities first dibs for affordable and low-income housing.

Great Barrington is looking at tax breaks for those who rent at affordable rates. Provincetown is already doing it

While it isn't clear how an affordable housing rental exemption might work in Great Barrington, Provincetown has been doing it since 2004. It provides an example of how to calculate the exemption based on how much square footage of a home or apartment is being rented.