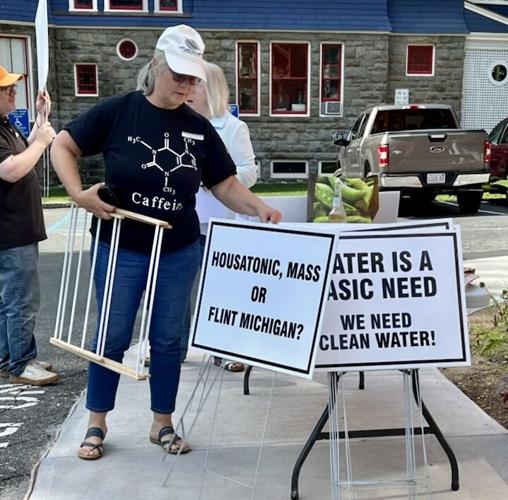 A protester last month with signs at Town Hall in Great Barrington. Up to 80 people came to protest the condition of Housatonic water. The discoloration problem worsened this summer, as hotter weather made manganese from the Long Pond source proliferate. The Select Board has invited representatives from Aquarion Water Co. to a discussion, hinting of a possible purchase. 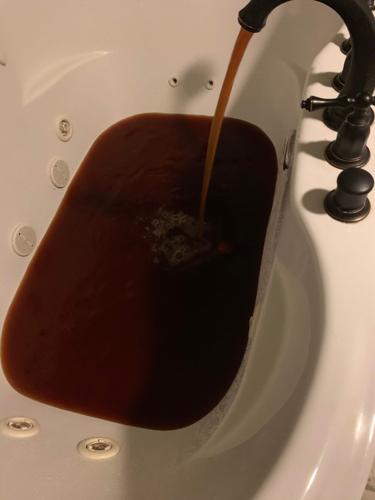 Kristi Lewis-Walsh of Crimson Lane in Housatonic, shared a photo of her water Sunday night.

Representatives from Aquarion Water Co., a subsidiary of Eversource, will attend the Select Board’s regular Zoom meeting Monday night for a discussion about problems with Housatonic Water Works Co.’s system.

Peter Fazekas, Aquarion’s director of corporate communications, told The Eagle that the board on Oct. 4 invited representatives to the meeting.

When asked if the company is considering buying Housatonic Water Works Co., Fazekas said the company doesn’t yet have enough information, but suggested it is a possibility.

“We want to continue growing the company,” he said. “We’ve been invited to give our thoughts on the current situation and answer questions.”

Select Board Chair Stephen Bannon said that residents won’t be able to ask questions during the discussion, but can participate during the citizens’ speak time at the end of the meeting.

The Bridgeport, Conn.-based company is the largest privately run water utility in the region, with 236,000 accounts in 72 cities and towns in Massachusetts, Connecticut and New Hampshire.

It has just over 8,800 connections in Massachusetts serving roughly 21,500 people, Fazekas said. It operates in Sheffield, Dover, Millbury, Oxford and Plymouth.

Sheffield has roughly 500 customers. Most households have private wells.

In March, Aquarion announced it would acquire Torrington, Connecticut’s water system by the end of this year. The company also recently purchased the Falls Village, Conn., system, which is part of Canaan, near the Massachusetts border at Sheffield.

Other Connecticut systems near the Berkshires include Norfolk and Salisbury.

The company says that the more systems it owns, the better it can operate.

“Over the last 10 years, Aquarion has integrated over 84 water systems into its operations, strengthening the company’s ability to deliver high-quality water to communities throughout the region,” says Aquarion’s website.

Water problems in Housatonic have worsened this year due to a combination of factors. Discoloration that ranges from yellow to dark brown has tried residents’ patience, and a brief spike in a cancer-causing chemical alarmed them and regulators. Officials are searching for long-term solutions to a complex crisis involving pipes that date to the 1800s and an outdated filtration system.

It’s also a financial crisis, given what is estimated to be a $25 to $30 million overhaul of mains and equipment. For that reason town officials are considering a purchase of the company, as well as other alternatives.

Bannon said the board has found a potential purchase by another company an “appealing” option and wants to explore this with Aquarion given its acquisition of Sheffield’s system last year.

“We wanted to leave no stone unturned,” he said.

Yes, hold out hope on a new filtration system and keep one eye on Aquarion — but now is not the time to be dismissing out of hand the potential solution of the town water system taking over Housatonic Water Works.