In response to a May 3 request by town officials, Housatonic Water Works Co. says state regulators don’t have a way to calculate customer refunds and bottled water as restitution for bouts of manganese-tinted water.

There’s also no reason to, suggested the company’s treasurer and co-owner, James Mercer. Regulators, he said in a letter, have deemed the water safe to drink.

Housatonic Water Works Co. will hold an informational meeting about its pilot study to test a filtration system that it hopes will remove manganese from the water.

The link to the meeting can be found on the town's website.

“As you know, our water is frequently tested by both company personnel and an independent certified laboratory,” Mercer said. “So while HWWCO’s water may have color at times due to the manganese, at no time has the water been considered unsafe for customer consumption by either HWWCO or the Massachusetts Department of Environmental Protection.”

Mercer also explained to The Eagle that the state Department of Public Utilities doesn’t provide a method to figure out reimbursements for something relatively sporadic.

“How do you quantify that?” he said.

Mercer’s letter came in response to a request from Town Manager Mark Pruhenski on behalf of the town and its Select Board to offer refunds and/or bottled water to residents who have been struggling for years with discolored water. It’s unappetizing and stains laundry and fixtures.

The company believes it has diagnosed the problem, which is high levels of naturally occurring manganese. It will hold an informational meeting Thursday night to discuss plans for a pilot study this summer of a filtration system that could remove the mineral.

Questions about safety, have also arisen — but for different reasons.

The town’s request followed heightened concern about water test results last year showing the presence of a compound linked to cancer that rose above maximum levels allowed by regulators. The spikes in haloacetic acid, a byproduct of chlorine used to disinfect the water, appear to be the result of record-breaking rainfall in July, the company says. It also says levels have been decreasing since the initial high reading in August. The May report shows levels of the compound to be half what they were in August.

The DEP determines whether levels are within safe limits by averaging out a year’s worth of quarterly readings. 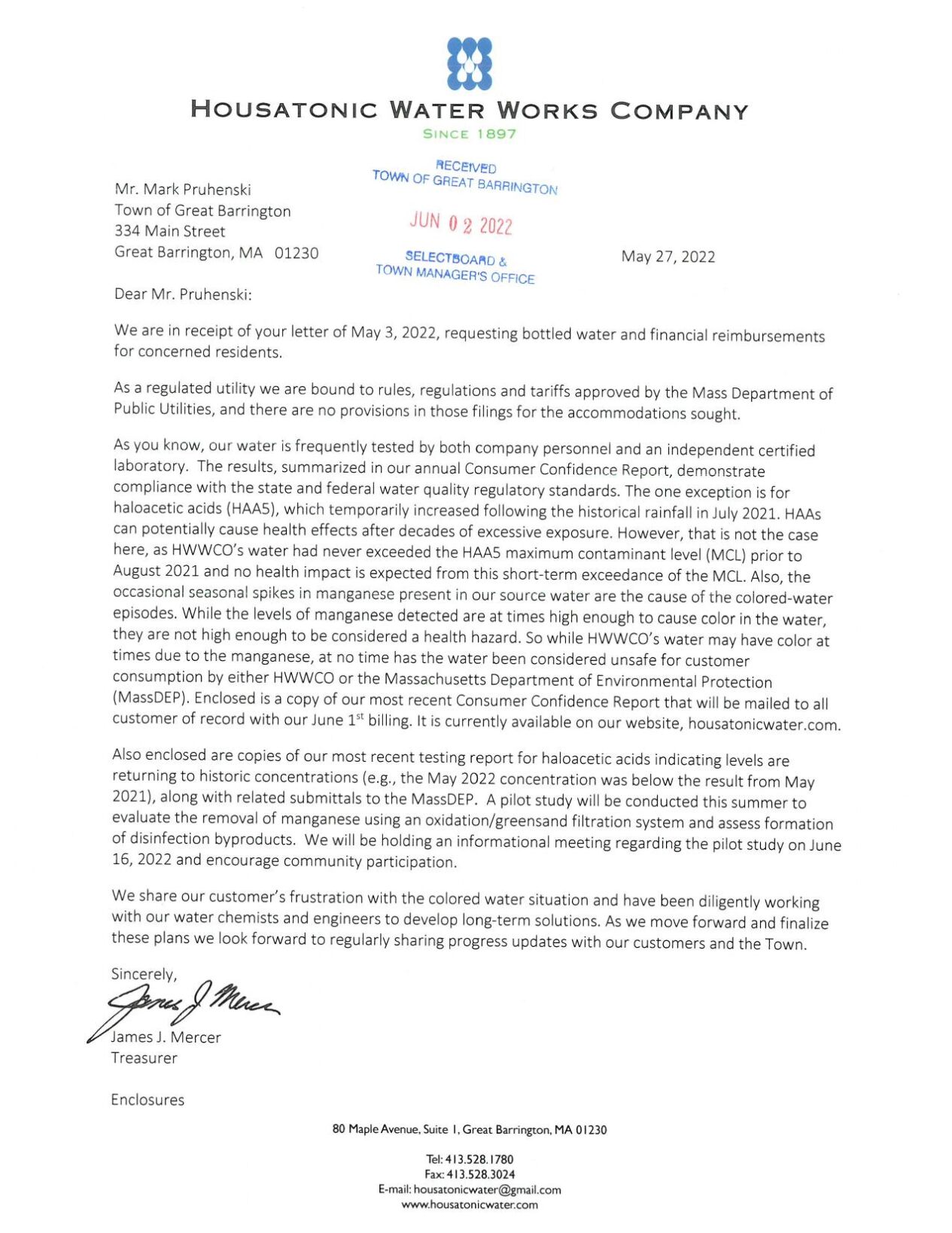 Bouts of discolored water, in shades from light yellow to coffee, have upset residents and drawn DEP scrutiny. The issue prompted a slew of meetings, studies and a Facebook page dedicated to complaints and photos of the water.

Great Barrington lays out options for troubled waterworks, and a possible purchase

The town has written to top state officials for help and residents have organized petitions. Town officials have discussed a way to purchase the company and merge it with Great Barrington’s water system.

The company hopes a “greensand” filtration system will remove the manganese and will test that remedy this summer. Greensand is a mineral with a number of uses, including in water filters.

GREAT BARRINGTON — David Guenette spent "hours upon hours" Wednesday running his faucets to try to clear the brown water flowing out of them."This time it was exceptionally dark," Guenette …