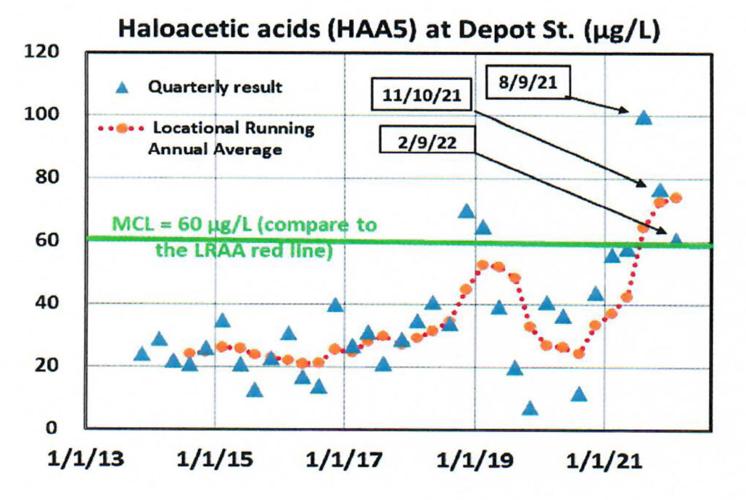 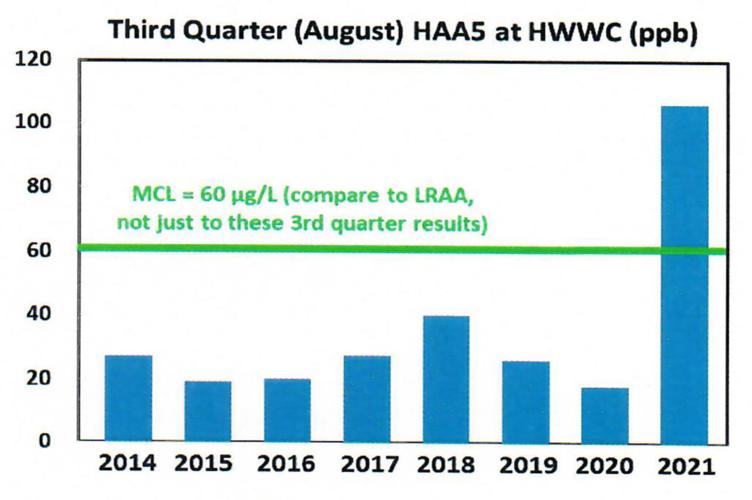 GREAT BARRINGTON — Recent tests of Housatonic water show that levels of a compound linked cancer have been falling but still exceed the safety threshold set by regulators.

Housatonic Water Works Co. notified its customers of the new results on March 30 in a mailing as well as a post on its website. The notice says that if the water is unsafe to drink, a notice would go out within 24 hours. Customers who might be at increased risk of drinking the water might want to consult their doctor, the notice also says. This includes those who have a “severely compromised immune system, have an infant, are pregnant, or are elderly.”

The state’s fact sheet on haloacetic acid, a chlorine byproduct abbreviated as HAA5, says that “people who drink water containing haloacetic acids in excess of the [maximum contaminant level] over many years may have an increased risk of getting cancer.”

The amount of HAA5 registered at 61 parts-per-billion in a water sample taken in February, according to the company. The threshold set by the state Department of Environmental Protection is 60 ppb.

However, the DEP measures compliance with this rule by averaging out the levels over a year. From May 2021 through February levels averaged 74 ppb, which exceeds the agency’s “maximum contaminant level.” Monthly rates during that period ranged from 58 ppb to 103 ppb, the company said.

Levels of HAA5 spiked in August to 103 ppb and drove up the averages, according to sample results. The company says record rains in July are the likely culprit, as they unbalanced levels of chlorine use to disinfect the water. As soon as the company learned of the problem, it began reducing chlorine, it said. HAA5 levels have dropped since August, according to the company.

Historically, averages have been much lower, hovering around 22 ppbs, according to the waterworks.

When asked, waterworks Co-owner James Mercer told The Eagle that the lower February result does give further evidence that the situation since July has been an anomaly. The company’s notice says the news is “good,” and “suggests the water is returning to its more normal state” in terms of HAA5.

The presence of elevated HAA5 levels alarmed a community already worried about the water system, mainly due to its age and the occasional bouts of discolored water.

Town officials are working with the town’s attorney to strategize a potential buyout of the private company so it can be fused with the larger Great Barrington system and get its infrastructure replaced. A petition filed in February also asks for a town takeover.

The DEP warned the company last month that it would face sanctions if it did not have a plan in place by April 4 to reduce levels of HAA5.

Scientists have pointed out that the compound’s effect on human health has been under-researched.

Does Housatonic have a cancer cluster? Residents are on a mission to gather evidence

Is there a higher incidence of cancer in Housatonic, and can it be traced to the water? Residents for Clean Water are dropping surveys into mailboxes in hopes of answering the questions.

Should residents have to pay for water that is discolored? The town says no; the company says yes. Meanwhile, the company will test a filtration system it hopes will fix the problem.