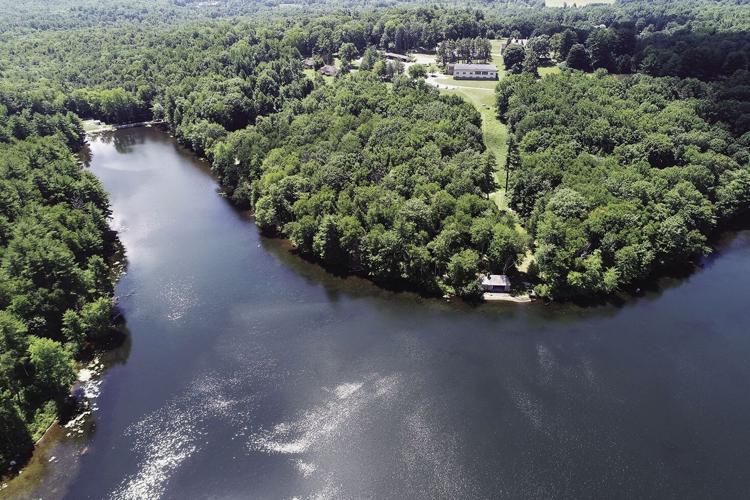 Long Pond in Great Barrington is the source for water provided by the Housatonic Water Works Co. A rise in the cost of equipment and supplies needed to upgrade Housatonic’s water system is prompting a look at other options, including connecting to Great Barrington’s system. 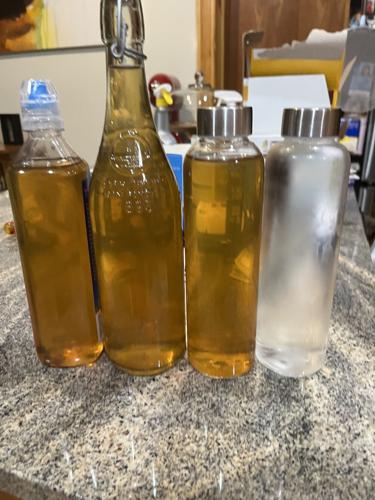 At left, Housatonic water from Denise and Trevor Forbes' kitchen faucet last month. To the right is a bottle of spring water they buy. Inflation now has Housatonic Water Works Co. considering other options, like connecting its pipes to those in Great Barrington proper. 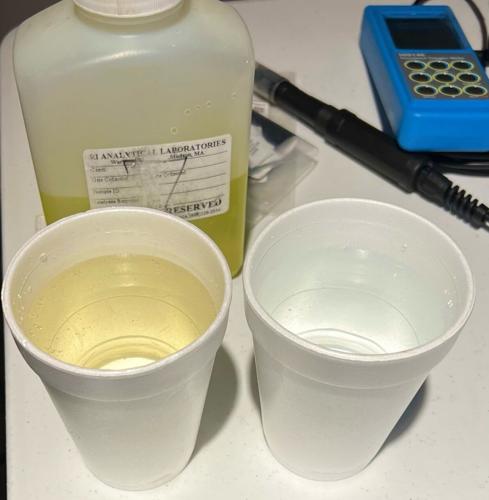 GREAT BARRINGTON — A rise in the cost of equipment and supplies needed to upgrade Housatonic’s water system is prompting a look at other options, including connecting to Great Barrington’s system.

“It would be beneficial to both systems, actually. In case of dire emergency here in town we would have something already in place versus scrambling and putting something above ground.”

Combining the water systems could make for a quicker fix for brown water that has plagued Housatonic Water Works Co.’s customers and sparked protests. Instead of drawing water from Long Pond, the source of manganese that discolors water, supplies would come to Housatonic from Great Barrington.

Housatonic’s old iron mains, however, can still hold manganese — the culprit — and would have to eventually be replaced to avoid future bouts of brown water.

But rising costs due to inflation and supply chain problems could delay any new projects that would solve Housatonic’s water woes. Those who run the Housatonic and Great Barrington systems say a bad economy hasn’t spared water utilities.

“That’s not gonna go away,” said Peter Marks, superintendent of Great Barrington Fire District Water Department, referring to the Housatonic system’s old mains. The fire district only serves Great Barrington. “It’s not gonna get cheaper, either. I just got a load of 8-inch pipe I ordered in December, and that cost as much as a load of 12-inch pipe.”

In a recent letter to customers, Housatonic’s waterworks said its cost estimate of around $4 million for a two-phase overhaul is understated, given the economy.

“As we began finalizing the costs for executing this plan this past month, we discovered that many component costs have now increased — dramatically, in some instances,” wrote James Mercer, treasurer and co-owner of the private water company. 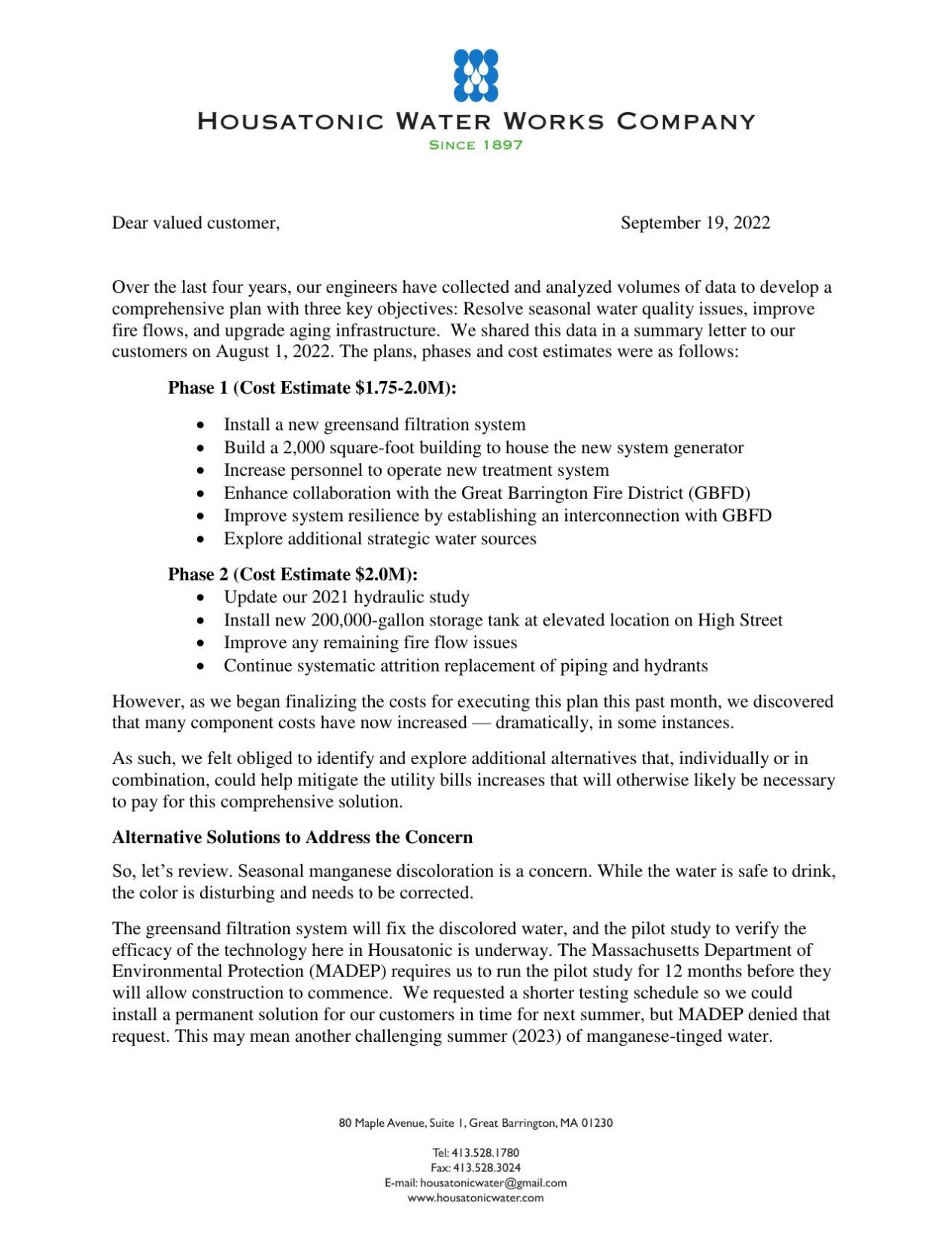 When asked how much of a hike, Mercer couldn’t say. He said what he learned is that prices are volatile and that vendors won’t even give quotes because pricing fluctuates so much.

For this reason, he is turning to options that include permanently interconnecting Housatonic mains to Great Barrington’s — something Mercer says will involve engineering and a pumping station to resolve pressure differences in both directions.

He suggested pandemic relief money from American Rescue Plan Act funds could be used. Other options he suggested are a public/private partnership with the three towns served, including Stockbridge and West Stockbridge, to leverage government grants; town support of a rate hike to support the upgrades at increased cost; or a town purchase of a system it has spent thousands to study.

In his letter, Mercer said a change in ownership may be best for the community. “We are amenable to discussions about whether a sale is a viable option at an agreed upon price,” Mercer wrote.

An estimate by the town had pegged water company’s value at up to $5.9 million — as is.

Residents struggling with shades of manganese-tinted water during a particularly bad summer, along with other problems, have ratcheted up pressure on the waterworks, the town, regulators and other state officials.

Regulators and the waterworks continue to say manganese levels are safe for drinking. Excess levels of manganese in the Long Pond water source is blamed for the problem. Those levels spike during warm weather and interact with chlorine used to disinfect the water.

The testing of a filtration system to remove manganese is underway and going well, Mercer told The Eagle. But regulators require it to be tested for 12 months, making it impossible to have the new filtration system ready before next summer.

That project was initially estimated to cost between $1.75 million and $2 million; a second phase that would improve fire-flow issues and pipe replacements was estimated at $2 million.

Connecting Housatonic to Great Barrington with the support of all three towns on the system isn’t an outlandish suggestion, fire district Superintendent Marks said. Besides, both the water works and the fire district have been working on it for some time.

“It would be beneficial to both systems, actually,” Marks said. “In case of dire emergency here in town we would have something already in place (in the current Housatonic water supply) versus scrambling and putting something above ground.”

0:31+2 Should Housatonic mount a water bill strike? A new group is exploring it

“That can go rather quickly, providing the material is available,” he said. “If it’s going to happen, the order is going to have to be put in very soon.”

He said the fire district would have to buy a small piece of land for a small new pumping station. The district’s governance is separate from the town, but its system is funded through a surcharge on property tax bills.

Eventually, Housatonic’s mains would need replacing, Marks said. Manganese attaches to the metal and builds up inside the pipes. New mains have liners to prevent this, Marks explained. In the field of hydraulic engineering, this build-up is known as “tuberculation” or “pipe incrustation.”

With regard to the other possibilities that involve the town’s support, Mercer said it’s time for a decision to be made. “So much has been done behind closed-doors and we’ve been excluded from those discussions at this point,” Mercer said.

Select Board Chair Stephen Bannon suggested that communications between the board and Mercer have been strained.

“We’ve talked to Jim when it’s necessary,” Bannon said. “His interpretation of necessary and ours is obviously going to be different.”

When asked about the possibility of a town purchase, Bannon said the board hasn’t yet met to discuss Mercer’s letter to customers, but that the options laid out are “interesting.”