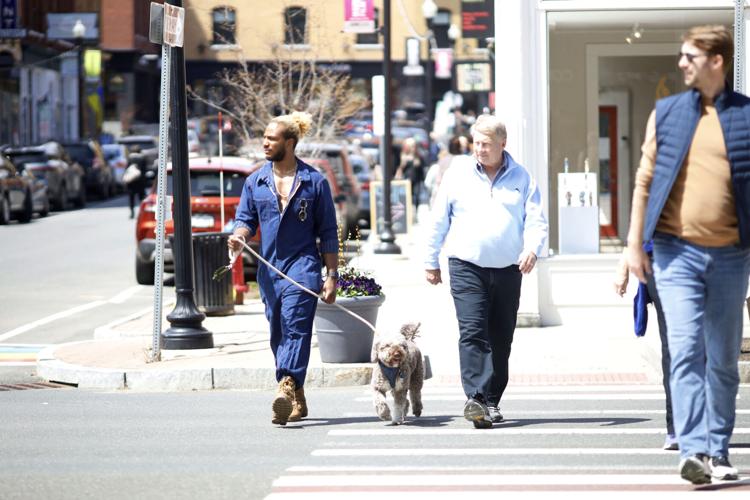 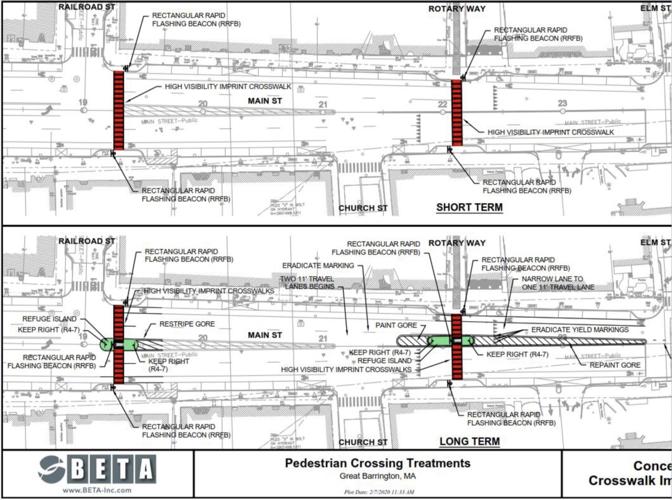 Engineering plans to beef up two of Great Barrington's Main Street crosswalks. The Select Board last month approved crossing enhancements, but shot down narrowing the lanes to two, as shown here.

GREAT BARRINGTON — Alarmed by accidents and near-misses in Main Street crosswalks over the years, town officials compromised on a plan to add flashers and “refuge” islands to beef up safety on what is also the busy state Route 7.

The two Main Street crosswalks to be revamped are at Railroad Street and just north of Church Street at what is called “Rotary Way.”

The Select Board voted unanimously to install three beacons and a raised “refuge island” in the Railroad Street crossing; the Rotary Way crosswalk will feature a smaller, painted island and two beacons.

The work schedule for the project is uncertain. It still requires refinement and approvals from federal and state agencies, said Christopher Rembold, assistant town manager/town planner. The exact cost is unclear; voters this month approved the work as part of a $1.9 million package of street improvements around town.

Officials are responding to what can be a harrowing crossing across four lanes of state highway in the busy downtown.

The state revamped this section of Route 7 in 2015, but left town officials and residents with crosswalks that did not inspire confidence and created a false sense of safety.

One of the most recent mishap happened earlier this month, when a motorist struck a pedestrian who police said was “well established in the crosswalk.” The pedestrian suffered minor injuries.

Probation for woman who struck four in Great Barrington crosswalk

The project also calls for the crosswalks to get a coating of “high visibility” paint.

Engineers from Beta Inc. also suggested a possible narrowing to one lane at the Rotary Way crossing to slow traffic, but some board members thought this would clog traffic unnecessarily.

Board Vice Chair Leigh Davis was impassioned about slowing traffic by dropping a lane there.

“You know, these couple blocks, I mean, there’s so many people traveling and walking on the streets — we have kids, we have the elderly … this has been an issue for so long,” Davis said.

Skateboarder injured after car hits him in Great Barrington crosswalk

People could always walk up to the more robust Railroad Street crossing should they feel wary at the other, said board member Eric Gabriel. Both Gabriel and Chair Stephen Bannon did not want to move to one lane to prevent a bottleneck that could dissuade visitors to the business district.

Bannon said that no matter what is installed, people have to stop being distracted when they cross.

“They’re oblivious,” Bannon said. “They’re the people who are talking on the phone, drinking their coffee, holding their 4-year-old and not paying any attention.

“Just because you have the right of way, doesn’t mean you just step out an hope they stop,” he added.

Should Main Street in Great Barrington go on a 'road diet' and drop a lane for safer crosswalks? That's a non-starter, it appears

Some town officials and residents are pushing to drop one of the four lanes of travel downtown, to eliminate blind spots and to intentionally slow traffic. But in a 3-2 split, the top board voted this week against reopening a discussion about such changes.

The man was in a Bridge Street crosswalk when he was hit. He suffered "non-life-threatening injuries to his lower leg" and was taken by ambulance to Fairview Hospital.