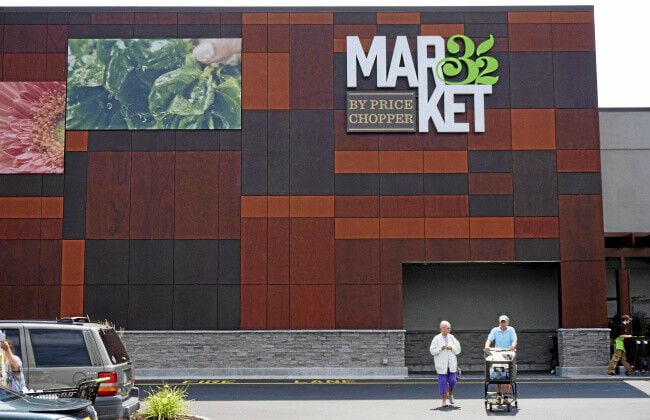 A Market 32 store in New York state. Town officials in Great Barrington are considering whether to give a beer and wine license to Price Chopper for its rebranded Market 32 store.

The Great Barrington Select Board on Wednesday. Three members raised concerns during the meeting about potentially granting a beer and wine license to a grocery store chain.

GREAT BARRINGTON — Just weeks after rejecting a gas station owner’s application for the town’s remaining beer and wine license, town officials are considering giving it to Price Chopper for its rebranded Market 32 store.

Select Board members discussed the supermarket’s application Wednesday, but decided to push a decision back two weeks to give them time to visit a Market 32 store in another town to see how alcohol is displayed.

The Price Chopper off Stockbridge Road is planning to expand, renovate and switch to the company’s more upscale store brand. With its larger space, it wants to display beer and wine to compete with Big Y, another supermarket across town that has an all-alcohol license.

Alcohol licenses are prized — and hard to come by. The town has a total of eight, and all but one are spoken for.

The board last month rejected a bid for that license by Ankit Patel, who owns a Shell station on Stockbridge Road.

At Wednesday’s meeting, Patel asked why a convenience store should be treated differently from a supermarket. At his hearing last month, he noted he is TIPS certified, checks IDs and manages other gas stations in the state where beer and wine are sold, including a Mobil station in Stockbridge.

In rejecting his application, board Vice Chair Leigh Davis and member Eric Gabriel raised concerns that selling beer and wine at a gas station could tempt people to consume on the go. And Chair Stephen Bannon said he worried about safety and security.

On Wednesday, Davis and Gabriel again raised their concern that people trying to grocery shop might be tempted to buy alcohol, and Gabriel said there should be a booze-free grocery in town.

But Eugene Richard, an attorney representing Schenectady, N.Y.-based Price Chopper, said it was only fair that the store be allowed to follow in the steps of Big Y, which renovated and now has a wide alcohol section. Big Y obtained an all-liquor license in 2018.

“That’s a real competitive disadvantage to be the only supermarket in town without a license,” Richard said.

He said the company is experienced in dealing with alcohol and has never faced related disciplinary action.

Other package store owners in 2018 fought applications by The Berkshire Food Co-op and Rubiner’s Cheesemongers and Grocers, saying doing so would cut into their profits. Both stores prevailed.

This time, no one challenged the applicant except Davis and Gabriel.

GREAT BARRINGTON — There were cries of "unfair" and "competition" at town hall Monday night. The reason? Beer and wine.Word on the street is that two separate applications for beer and wine …

Abrahams told The Eagle that he doesn’t understand his colleagues’ logic in both instances.

“The same people who said the gas station shouldn’t get a license because [Patel] sells gas and snack food are saying Price Chopper shouldn’t sell booze because they sell food,” he said.

But Davis pointed to Big Y’s scattered displays throughout the store as a point of concern.

“I am empathetic and aware that there are people that are trying their hardest to abstain from alcohol and that don’t drink alcohol and don’t necessarily want it when they go grocery shopping,” she said.

On Wednesday, residents countered that it isn’t the board’s responsibility to help people manage their urges. And they pointed to what they said is flawed logic, as well as hypocrisy regarding all sorts of potential available vices.

“If we’re talking about not tempting people, then perhaps our grocery stores should get out of the lottery ticket business, because gambling is just as serious an addiction,” said Michelle Loubert.