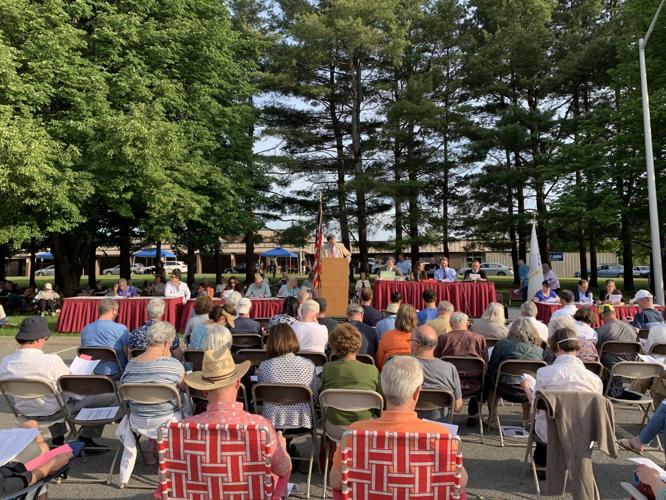 The Select Board and other town officials at annual town meeting this month, where voters approved a short-term rental bylaw. 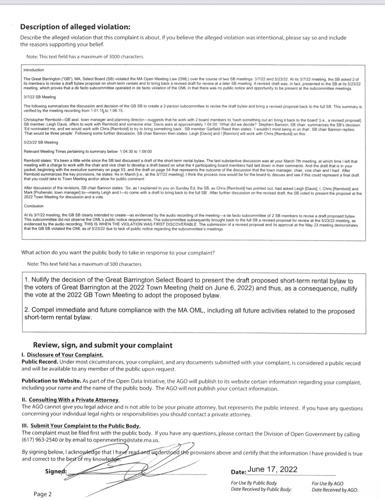 GREAT BARRINGTON — Turmoil over short-term rental rules resurrected this month after residents filed a complaint against the Select Board, alleging a tainted lead-up to the town’s approval of its bylaw should overturn that vote.

The complaint, filed on June 17, says that when two board members met alone with a town staff member to hammer out a revised version of the regulations, it created “a de facto subcommittee” that did not meet public noticing requirements and so did not allow for the public’s presence.

The board approved, 3-1, a draft of its response to the complaint, denying the open meeting law violation. The matter will ultimately be adjudicated by the Attorney General’s Office.

Board member Eric Gabriel recused himself; Ed Abrahams, the lone dissenter, said the board’s response is full of “half-truths.”

Town Manager Mark Pruhenski, reading from the response letter, said that two board members had offered to help the Assistant Town Manager/Town Planner Christopher Rembold with the bylaw draft, and that does not constitute a violation.

It was Chair Stephen Bannon and Vice Chair Leigh Davis who said they could meet with Rembold, but there was no vote taken to create a subcommittee, one of the tests of whether the law is violated.

“There was no vote of the board, there was no statement regarding creation of a subcommittee and there was no delegation or grant of any authority to the chair and [Vice Chair] Davis,” Pruhenski said, reading the response. “The chair simply stated, and I quote, ‘Let’s move ahead — Leigh and I will work with Chris on this.’ ”

Pruhenski also noted a similar situation in Brookline as precedent, in which the Attorney General’s Office found that no subcommittee had been created.

It was 10 mostly vocal opponents of the short-term rental bylaw that joined on to the complaint filed by Daniel Seitz and Anthony Segalla. The complaint points to two meetings in which board members agreed that Davis and Bannon would work on the bylaw with Rembold.

And it follows months of upheaval over ethical questions, personal attacks and grassroots campaigns on both sides of the debate that divided the town and stirred its economic divisions leading up to the June 6 vote at annual town meeting.

The bylaw, in part, allows Airbnb-type rentals for no more than a total of 150 days per year.

On Monday, the bitterness was back.

Abrahams, who was opposed to the bylaw as written and for months sparred with Davis over it, said the four participating board members all agreed that Davis and Bannon should meet with Rembold and report back. He said this was an intentional action by the board, and that not taking a vote on it makes it not subject to open meeting law.

“Seems like a very convenient way to get around open meeting law,” Abrahams said.

Davis wanted to know if Abrahams had “any hand in the complaint” before she read out the names of the 10 residents who filed and signed it.

She pressed him. He said he was not involved, and that it wasn’t germane to the substance of the issue.

Bannon strongly disagreed with Abrahams’ assertion that the response letter contains “half truths.”

Resident James Garzon implored the board yet again to stop “being so contentious” and noted that differences are hashed through professionally on other town boards.

Davis and several residents said the wishes of those who voted to approve the bylaw should be respected.

Resident James Manning said, with regard to the alleged violation, he believed no one acted in “poor faith” or was “grossly negligent.”

“Maybe somebody made a mistake,” he said.