Let’s say you live in Stockbridge or in Egremont, and you have a job in Great Barrington but your car, if you have one, is out of service.

Getting to work, or anywhere else in those three towns — where BRTA bus service is limited or non-existent and ride-sharing companies like Uber and Lyft are unavailable — is a challenge if you don’t have wheels.

The Massachusetts Department of Transportation has funding available to seek an answer — a “micro-transit” pilot project grant of $187,300 is available if the three South County town leaders agree to a 50 percent match based on the size of the community and the expected demand for service. 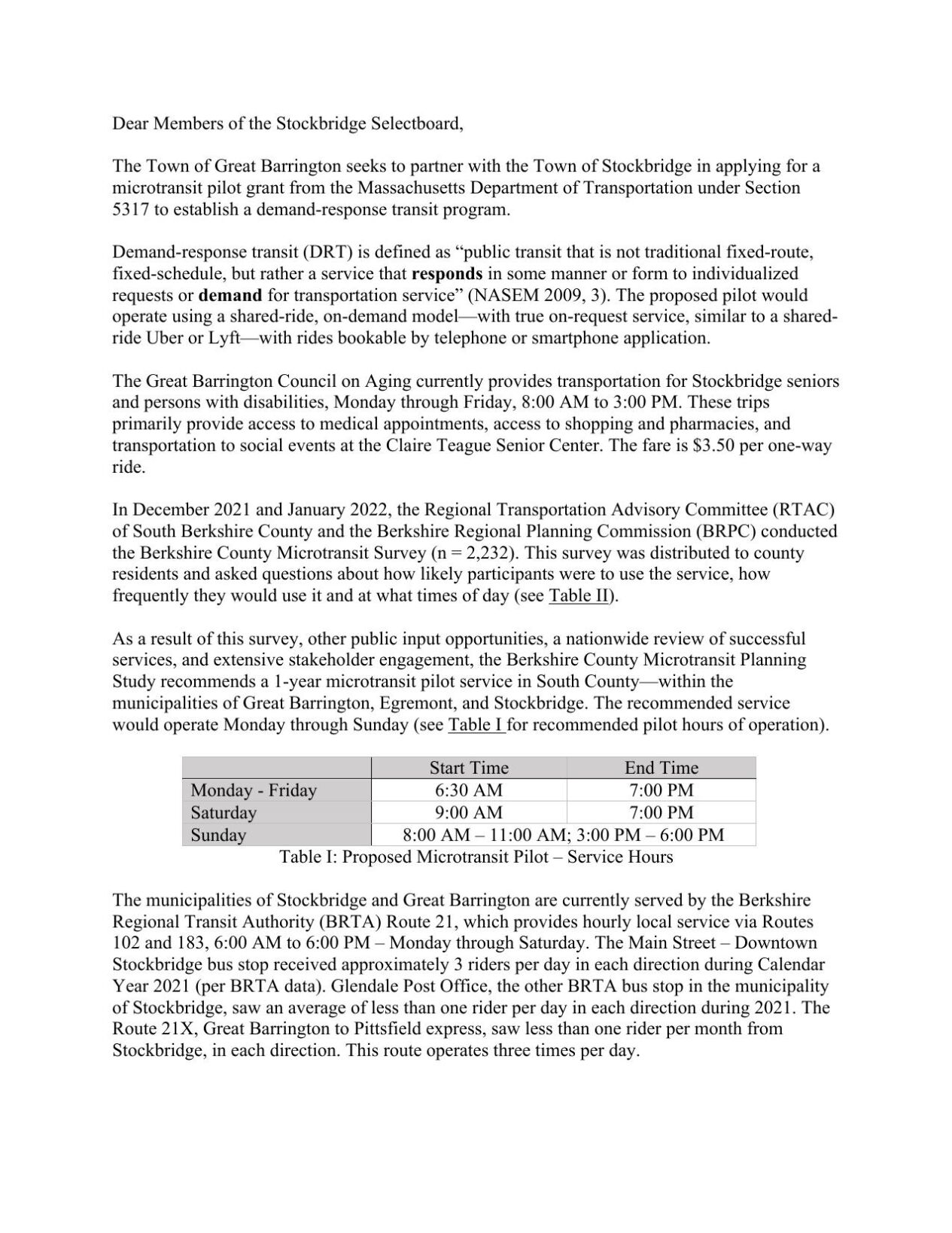 The game plan for funding and activating the on-demand pilot project is detailed in a document prepared by Tate Coleman, chairman of the Regional Transportation Advisory Committee based in Great Barrington. He has been working with the town on transportation and other issues for the past three years.

Coleman, 18, a Great Barrington resident, is also the town’s Finance Department assistant. Graduating from Bard College at Simon’s Rock this month, he’s headed for a master’s program at the University of Massachusetts Amherst, specializing in regional planning and civil engineering.

MassDOT is enthusiastically supporting a test of the on-demand transportation program, Coleman told The Eagle.

“Micro-transit is similar to a shared ride on Uber or Lyft,” he said. “It’s an on-demand service you can request on your smartphone, home phone or online. You can request it a day in advance or half an hour in advance.”

As Coleman said, “We know that transportation needs are not being met in our communities; it comes up time and time again. We don’t have enough public transit or transportation options.”

Could the program expand to additional communities? “Oh, certainly, depending on the success of this pilot program,” Coleman said. He identified North Adams, Lee, Lenox and Sheffield as possibilities based on potential demand, but not Pittsfield because of existing BRTA fixed-route service schedules.

Here’s how the pilot project would work:

• The service, to be provided by available vans operated by the Great Barrington Council on Aging, would cost $2.50 for a one-way trip within one of the three towns, or $3.50 for a ride to an adjacent town, such as from Great Barrington and Housatonic to Stockbridge or Egremont.

• The “demand-response” transit program would be especially useful for employees needing a ride to work, individuals or families lacking car transportation, seniors and the disabled.

A survey of public demand distributed to county residents by the transportation advisory committee and the Berkshire Regional Planning Commission showed 74 percent of Great Barrington locals would be likely to use the service, with 57 percent frequently.

In Stockbridge, likely use was cited by 70 percent of residents, with 63 percent indicating a need for frequent rides, weekly or more often. The survey results for Egremont showed 64 percent usage, 59 percent frequently.

The proposed pilot zone also would include portions of the three towns not currently served by BRTA, according to Coleman’s document.

The one-year trial run would begin next Jan. 1, as long as all three towns approve the cost-sharing matching grant.

In Great Barrington, where the “price of admission” is about $75,000, Assistant Town Manager and Town Planner Christopher Rembold said federal American Rescue Plan Act funding would cover the cost, subject to a discussion between Town Manager Mark Pruhenski and the Select Board.

“We see transit as a way to fill the gaps in the existing BRTA transit system, helping households and employees impacted by the pandemic and who need support getting around town, getting to jobs, medical appointments, things like that,” Rembold said. “The research shows there’s quite a bit of probable demand for this pilot service, more flexibility at different times and days, like a Sunday work shift. We’re going to see how it works, and we’re cautiously optimistic. It’s an exciting program.”

With keen enthusiasm, the Stockbridge Select Board unanimously approved its $10,000 share on short notice Thursday, following a brief presentation by Jamie Minacci, the town’s representative to the Regional Transportation Advisory Committee for South County. She also represents the town on the BRTA Advisory Group. The regional transportation authority is not involved in the pilot project, said BRTA Administrator Robert Malnati.

“The funding came quickly because MassDOT got funds unexpectedly,” Minacci said. The deadline for towns to participate is Friday, she added.

“This is really awesome,” said Stockbridge Selectman Patrick White. “This is also for people who work at Tanglewood or anywhere in the towns so people can get rides during expanded hours.”

Additional funding from the state may be available if the project is deemed successful, said Town Administrator Michael Canales.

The town of Egremont has a vote on whether to participate scheduled for its Tuesday evening Select Board meeting — the town’s share is $5,000.

Using state grant funding, Adams, North Adams and Williamstown are joining together to try out a plan to share one human resources director to handle employee relations for all three municipalities.