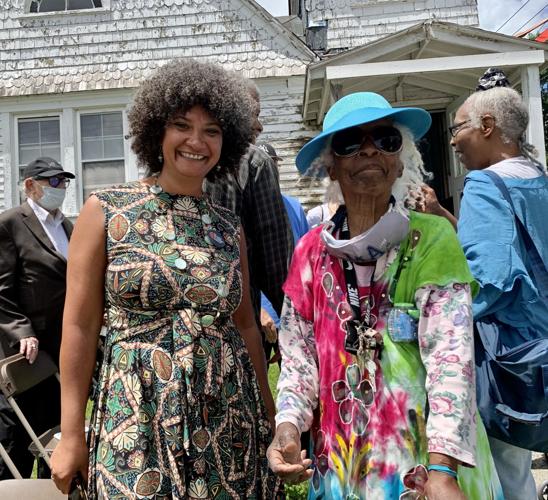 Sabrina Allard and longtime church member Fran O'Neill at the naming of the W.E.B. Du Bois Center for Freedom and Democracy in Great Barrington Friday. 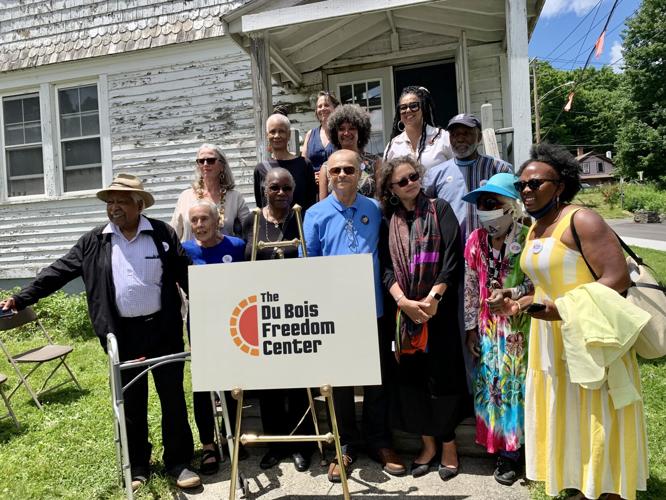 Board and advisory members of The Du Bois Freedom Center. Clinton Church Restoration are working to renovate the home of The Du Bois Center for Freedom and Democracy in the former Clinton A.M.E. Zion Church in Great Barrington. 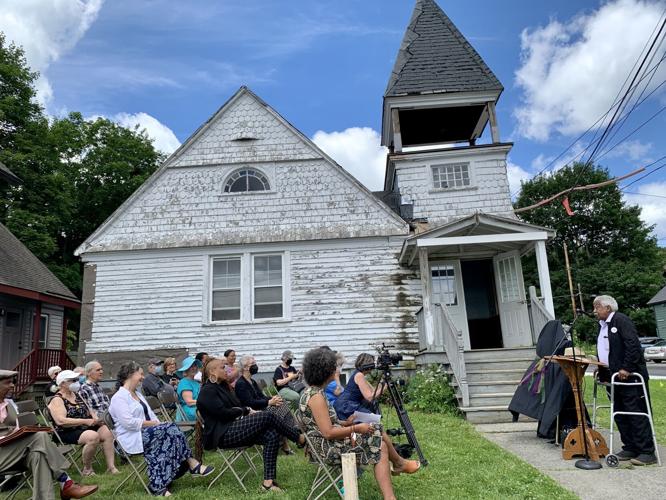 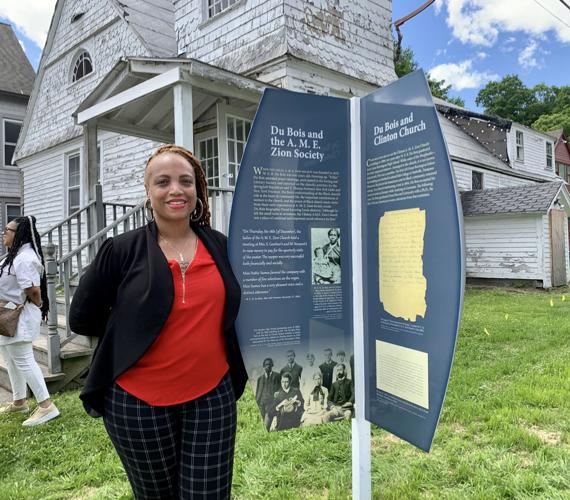 Latoya Bosworth, a distant cousin of W.E.B. Du Bois, at the event Friday. 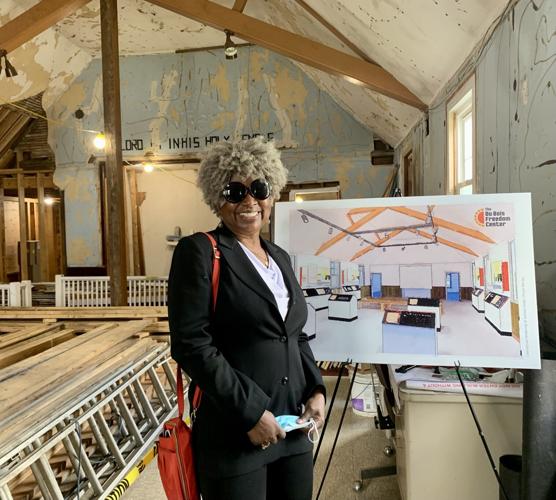 Lisa Smith Brown grew up attended church at what will be The W.E.B. Du Bois Center for Freedom and Democracy.

Lisa Smith Brown, of Marietta, Ga., attended the church growing up, and remembers singing in the choir. Brown recalls that Du Bois was very much talked about and in the spirit of the place where he had spent time. When she left home and traveled, people also connected the two. “I’d meet people from around that say, 'Ah, you grew up where Du Bois was.'"

GREAT BARRINGTON — Friday marked the unveiling of The W.E.B. Du Bois Center for Freedom and Democracy, and heralded a future that honors not only town native Du Bois and his thoughts and ideals, but South County’s rich Black heritage.

“We could not have picked a better name that represents history and will automatically speak history just by the naming," Dennis Powell, president of the NAACP Berkshire County Chapter.

The cultural center and museum, known as The Du Bois Freedom Center, will be the first of its kind in North America to honor Du Bois.

What comes next is to renovate what will be its home in the heart of downtown, where work to the now-deconsecrated historic Black church continues.

As does the ongoing fundraising to restore the cherished building on Elm Court, as a former longtime parishioner noted at Friday’s name unveiling outside the former home of the Clinton A.M.E. Zion Church, where the late pastor Esther Dozier ministered to her flock as well as the larger community.

“We are fortunate enough that we’re going to save it,” said Wray Gunn, board chair of the Freedom Center as well as Clinton Church Restoration, the nonprofit that developed in 2016. “Everything takes time. I hope it’s within my time.”

More than 75 people celebrated on the lawn of the building. A handful of speakers noted the significance of the Freedom Center, whose physical space is still in the works through fundraising that has including multiple state and other grants. State Rep. William “Smitty” Pignatelli D-Lenox attended, and told The Eagle that “the monies are there” to keep the momentum.

One speaker was David Levering Lewis, whose two-volume Du Bois biography earned him two Pulitzer Prizes. He noted a past in which “human rights apostle” Du Bois’ legacy was dulled, to the Du Bois renaissance that is sweeping the area. Levering Lewis will serve as honorary chair of the Freedom Center’s National Advisory Council.

The Freedom Center “presents a singular opportunity to reclaim and extend in Du Bois’ hometown, the Black intellectual, artistic traditions, and social movements to which he dedicated his life’s work,” Levering-Lewis said in an earlier statement.

Kendra Field, an associate professor of history at Tufts University noted the gravity of what the Freedom Center means for understanding past and present in the Berkshires and beyond. Field is the Freedom Center’s Historian-In-Residence.

“Here we have the extraordinary opportunity to see up close the local roots of a national and indeed global story of Black life, culture and resistance,” Field said, adding that the Berkshires and Great Barrington became “a site for Black refuge, culture and intellectual engagement,” amid the great migrations of African Americans during the 20th century.

Sabrina Allard, a board member, pointed to the deep comfort she felt when as a child growing up in North Egremont, she learned of the Clinton Church a few miles away. Allard “longed to be around communities that looked like me.”

Now the Freedom Center will stake a place for Black and multi-racial young people to “see themselves,” Allard said. “It is an honor to be present as we rename the space that gives so many people the freedom just to be.”

Latoya Bosworth attended the event, and said she learned about 20 years ago that she is the first cousin of Du Bois, six times removed. Bosworth, who works for one of the project’s funders, Mass Humanities, found she had much in common with Du Bois. Like him, Bosworth is a poet, and has a Phd. She had done her thesis on Du Bois before she knew she was related, but had always felt connected to him after reading “The Souls of Black Folk” in seventh grade.

“I think it’s just so magical,” Bosworth said. She said it is sad that recognition took so long, “but also beautiful that it’s finally starting to happen, and hopeful that it will set a trend for other people … there were so many [Black] communities in Massachusetts that existed that are still here.”

“We could not have picked a better name that represents history and will automatically speak history just by the naming, and with our democracy under attack right now what can be more important than recognizing such a powerful human being that was about democracy and change,” he said. “It’s a great day.”

The Rev. Joallen Forte, of Macedonia Baptist Church in Great Barrington, leads a prayer during Friday's celebration at the W.E.B. Du Bois Boyh…