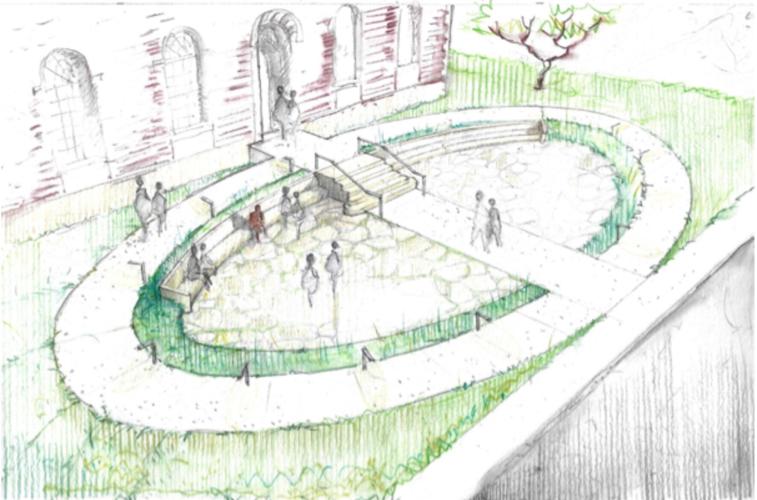 An early rendering from the W.E.B. Du Bois Sculpture Project, an effort to realize a long-desired statute of the civil rights architect in Great Barrington. The new vision shows a bronze, seated Du Bois looking out at a new plaza created at the Mason Library, and holding a book. 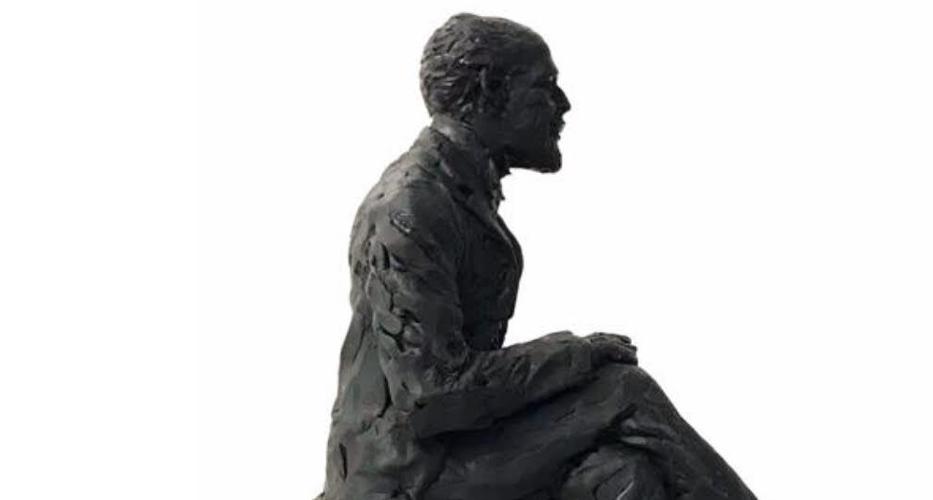 A rendering of a concept of how the bronze sculpture of Du Bois might appear. The W.E.B. Du Bois Sculpture Project has announced its search for an artist to create and cast the monument.

GREAT BARRINGTON — A vision for a long-desired sculpture of W.E.B. Du Bois in his hometown would transform the front grounds of the library in memory of his civil rights legacy, as well as his love of books and writing.

The installation would also rework a popular spot in front of the Mason Library, turning it into a more robust gathering space.

The W.E.B. Du Bois Sculpture Project on Monday presented one of its new drawings showing a life-size design of a seated Du Bois holding a book, as well as an oval-shaped plaza with marble seating. The changes would incorporate repair of the library steps, which are in need of an overhaul.

“It’s both a sculpture and a plaza,” said Bobby Houston, who is working on the project and helped present it to the Select Board.

The project would tie together the nearby Du Bois Freedom Center, the African American Heritage Trail and Du Bois’ birthplace around the corner. Also, the library will eventually hold Du Bois literary materials that will be donated by The Du Bois Center/North Star Rare Books on South Main Street.

The nonprofit plans to reach out to Black sculptors who have experience in public art and hold an open competition, said Julie Michaels, chair of the project committee. The group expects to work with an African American historian, she said, and collaborate with other Du Bois legacy and Black history organizations.

The project’s estimated cost is $323,000. Fundraising is sponsored by the Nonprofit Center of the Berkshires. Houston said the project had received significant donations, but declined to say how much.

The idea for a life-size statue of Du Bois was sparked by Freke Vuijst, a Dutch journalist and town resident, who died after the town approved the proposal in 2019, amid some attempts to derail it.

A new group picked the effort back up and began reimagining an area on Main Street that has been drawing people in with the library’s outdoor weekend book sales and its central location.

Town officials have said they worry about removing grassy earth and “overbuilding” with concrete and marble there. “Are we making it too big and grand for that space?” asked Select Board Vice Chair Leigh Davis.

Houston said it is a concern shared by the organizers. The group wants to see level ground, so people aren’t navigating a hillside. A lawn is likely, given the drainage and engineering complexities of a stone plaza.

Michaels and Lauren Clark, who is working on the project, said public input would be sought throughout the project.

The chosen sculptor’s work-in-progress would be made available to the public at Chesterwood in Stockbridge, the former home of Lincoln Memorial designer, the sculptor Daniel Chester French.

Those working on the effort say they want to make sure the project aligns with the Du Bois legacy, as well as Black history and culture.

Ari Zorn, another project organizer, said he had fruitful discussions about the project with Du Bois Freedom Center staff. Beth Carlson, a director at the Freedom Center, said it would be valuable to also have a Black historian on the sculptor selection team and involved with the design.

Great Barrington will be home to the first Du Bois museum, legacy center in North America

A museum and heritage center is dedicated to 'human rights apostle' W.E.B. Du Bois. The Du Bois Freedom Center is born. Now the former church has to be renovated.

Samara Klein, who grew up in Housatonic, is the new director of Great Barrington's two libraries. In this Q&A, she says her goal is to make the town's libraries more accessible, welcoming and useful. And to change public perceptions of libraries.

The search is on for an artist that will put a likeness of scholar and civil rights architect in a prominent place off Main Street.