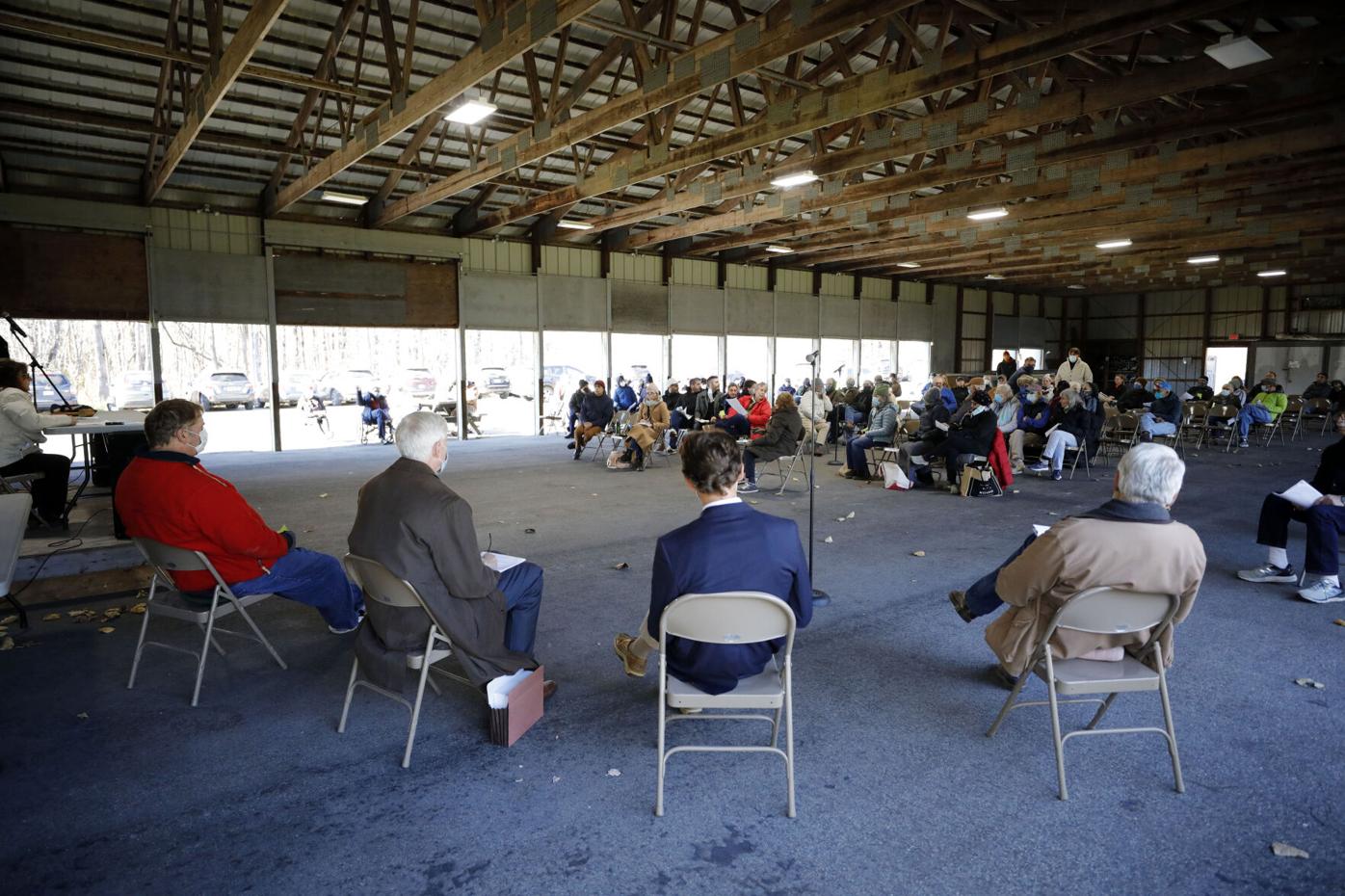 The three members of the Monterey Select Board, as well as the board’s attorney, sit before a large crowd during a special town meeting Saturday at the Monterey Pavilion. Voters approved money for an investigator — he since has quit — to probe complaints. 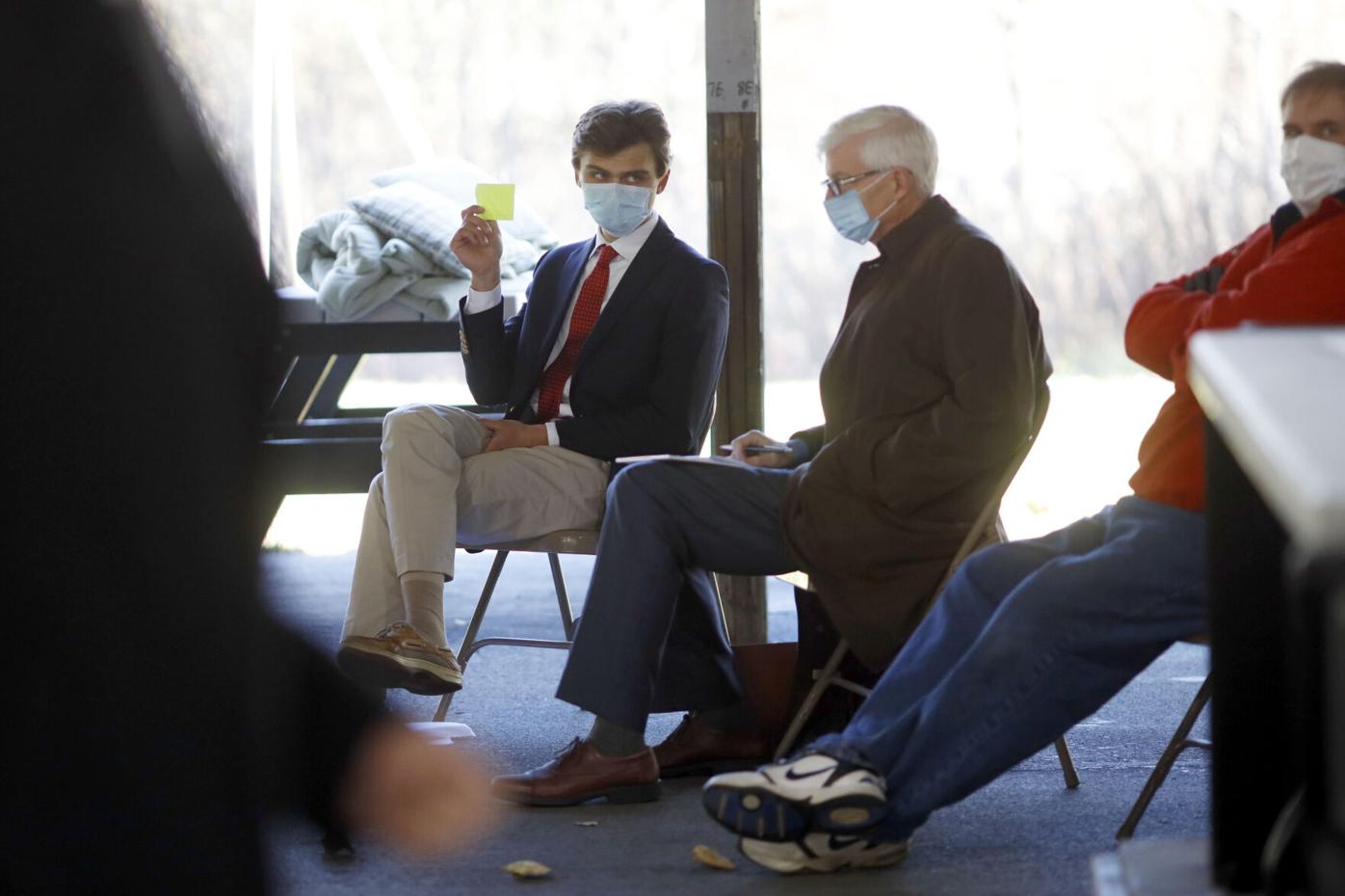 Monterey Select Board member Justin Makuc votes to continue discussions about a proposed election recall Saturday, during a special town meeting at the Monterey Pavilion.

MONTEREY — A private investigator hired to probe a complaint by one town employee against another quit Tuesday, after the number of complaints lodged in Town Hall ballooned in recent days to 19.

Paul L’Italien told the Select Board in an email obtained by The Eagle that he would not have considered the job had he known the extent of the complaints and their new time frame, and had he known Monterey Police already had conducted a preliminary investigation.

“It was not until I attended the in-person executive session on November 4, 2021 that I was made aware of the magnitude and depth of these matters. “I was very surprised to learn there are seven (7) persons whom allegations have been made against.”

“It was not until I attended the in-person executive session on November 4, 2021 that I was made aware of the magnitude and depth of these matters,” wrote L’Italien, who had been interviewed by the board Oct. 26. “I was very surprised to learn there are seven (7) persons whom allegations have been made against.”

“In reviewing the material sent to me I have identified at least nineteen (19) points you wish to be investigated,” he said. “Some occurred recently while others occurred a year ago and the oldest allegations go back to 2014.”

Town voters at a special town meeting Saturday had approved $10,000 to pay for L’Italien, a former state police detective, to sort through the mess.

The approval of the money, and efforts to oust Select Board member John Weingold amid growing unrest at Town Hall, is the latest development in disputes that have burned their way through town over more than a decade.

The most recent flashpoint was a July 21 incident at Town Hall, and the complaints filed with the Select Board that include allegations of a hostile work environment and intimidation.

Board Chairman Steven Weisz said that was among the items expected to be discussed at a meeting scheduled for Wednesday evening. The board also had interviewed two other investigators, and likely will consider hiring one of them.

“This is a big distraction, and I would like the Select Board to focus on the actual needs of running a town and some long-range strategies,” he said. “We have winter coming up and a new highway director and budget season in January.”

A 2014 report that recommends a return to top-down management in Monterey.

Weingold said he doesn’t think there should be an investigation, since the interpersonal problems at the root of the complaints date to before 2014 and have been the focus of some attempts to restructure Town Hall.

“This isn’t, like, a one-off,” Weingold said, noting that the current complaints reveal continuing patterns of bad behavior and malfeasance in town government.

He says a 2020 consultant’s report, and another in 2014 by the nine-member restructuring committee composed of residents, including Weisz, indicates long-standing troubles that mirror the current debacle. The 2014 report called for a restoration of “top-down management.”

A consultant's report that recommended changes at Town Hall.

Weingold himself also is the subject of a countercomplaint, and has been accused of stirring a cauldron of rancor. Weingold says he simply is trying to bring lawfulness and better conditions to Town Hall.

Select Board member Justin Makuc, who drove the hiring of an investigator, and who filed three complaints himself against Town Administrator Melissa Noe, could not be reached for comment Wednesday.

What exactly has been going on in Monterey? That question should be answered before anything rash is done about the structure of local democra…