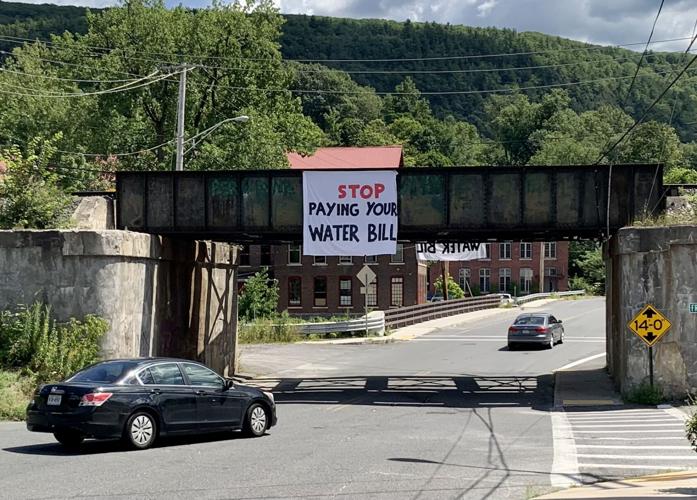 Banners appeared in Housatonic Monday morning calling on customers of the Housatonic Water Works to withhold payments. The move comes amid a summer of water problems due to excess manganese in the Long Pond source that the company plans to filter. 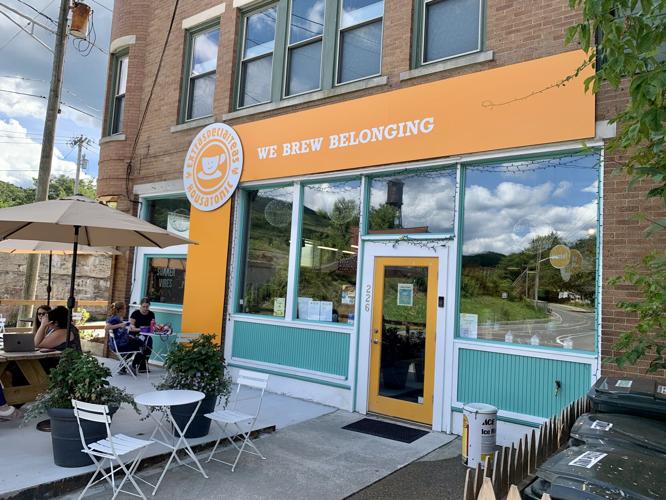 Extra Special Teas in Housatonic buys bottled water for their tea and filters water for other uses.

Apparently overnight, protesters hung banners on both sides of the village railroad trestle on Park Street. Residents and those who work in the village said they noticed them Monday morning.

The protest comes after what some residents say has been a steady run of drinking water whose discoloration ranges from yellow to dark brown.

The problem is linked to elevated manganese in the Long Pond source, according to James Mercer, co-owner and treasurer of the privately owned Housatonic Water Works Co. Mercer says higher summer temperatures are making the discoloration problem worse than usual.

He also said it is worse on privately owned ways, where the water company doesn’t own or maintain pipes that serve those homes — particularly on nine dead-end streets.

“The water just sits there,” Mercer said. “Only the flow they generate by their use moves through the pipes.”

The company is on the cusp of a pilot study to see if a new filtration system will remove the mineral causing the discoloration. If it does, the waterworks will purchase the system, but not without an eventual, phased-in rate increase. The company warned Aug. 1 that bills could double — a move that likely further aggravated customers.

Murky water isn’t the only problem that has households grumbling. Water tests last year revealed elevated levels of a compound that is the byproduct of water disinfectant, and which is linked to cancer. Those levels have since dropped.

At least two water customers have stopped paying their water bills in protest. Mercer took two to small-claims court in June. Mercer said he hasn’t seen other customers stop paying their bills since.

Outside Extra Special Teas Monday morning, House Manager Hannah Stanyon said she saw the banners when she arrived at work. “It’s been a tiny little bit brown,” Stanyon said of the water at the corner cafe, located across the road from the trestle.

The cafe uses bottled water for its teas and filters the water for dishwashing and other uses. “Just to be extra safe,” she said.

Sherry Grossman stopped to comment while pushing her grandson in a stroller. She comes from Boston weekly to visit her son’s family. The family buys spring water for cooking and drinking, and filters water for bathing.

Grossman said the family was hesitant to move to the village because of the longstanding water problems. “Why did it happen?” she asked, wondering how one private company is the only game in town for the delivery of drinking water.

Bills won’t rise suddenly, Mercer said. He wanted to remind the community that any new filtration system and other work, if approved by regulators, will have to go through a vetting process that will include a public hearing for rate hikes.

When asked if water bills have been kept artificially low for decades by not fully upgrading the system, Mercer disagreed. He said it is more accurate to say that projects have been scaled back over the years due to pressure from the public and town officials. No one wanted water bills to go up.

The waterworks has asked for and received rate increases nine times since 1956, according to the state Department of Public Utilities.

Residents who live at Flag Rock Village will get two gallons of bottled water delivered for free every week. The rest of Housatonic is increasingly agitating for a solution.

Will this big utility buy Housatonic's water system? Great Barrington and the company are exploring it

As they cast around for solutions to the Housatonic water problem, Great Barrington town officials invite Aquarion Water Co. to the table for a discussion.