GREAT BARRINGTON — The Massachusetts Department of Environmental Protection has ordered the Housatonic Water Works Co. to present by April 4 a proposal for reducing levels of a disinfectant byproduct linked to cancer in its drinking water.

Failure to meet the deadline, or be granted an extension, could result in legal action, “including, but not limited to, criminal prosecution, court-imposed civil penalties, or civil administrative penalties,” according to a March 3 notice from Deirdre Doherty, drinking water/municipal services chief in the Western Regional office of the DEP.

It also could result in the utility landing on the federal Environmental Protection Agency’s list of water systems that haven’t fixed problems requiring action.

In the third and fourth quarters of 2021, the company reported elevated levels of haloacetic acid, a chlorine byproduct also known as HAA5. And it neglected to notify the public of some of these test results within the required 30 days. In addition, the company was late with some reports to the DEP. 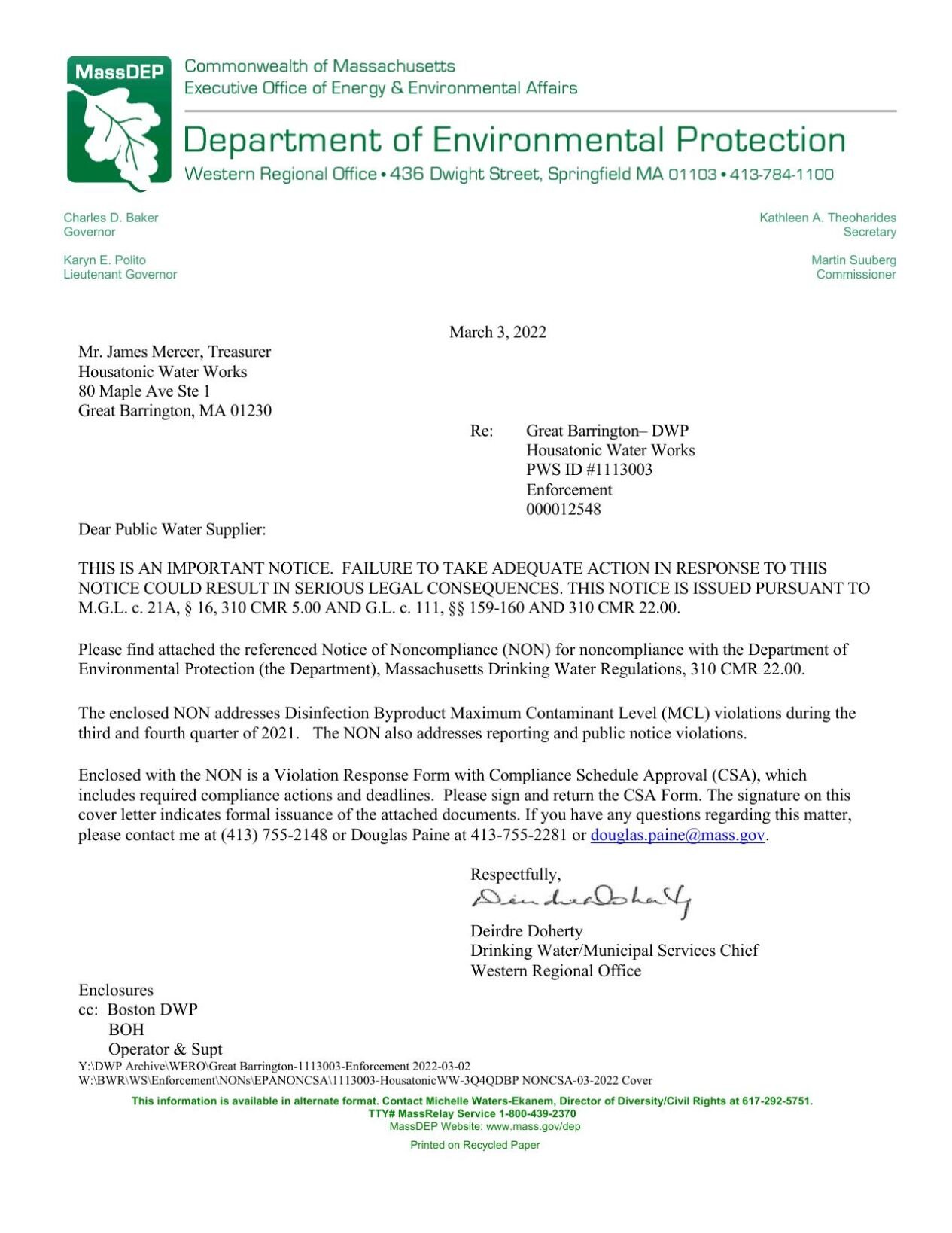 Waterworks co-owner and Treasurer James Mercer did not answer questions about reporting, or whether more recent results from this year are available, but said the company plans to fix the problem.

“All we’re looking to do is follow the science on this and get the levels under control,” he said. “We fully intend to meet all the requirements.”

Mercer also said the company soon will issue a document about the situation for customers. And town health officials are monitoring the situation.

The problem is the latest to roil the waterworks and its customers. Periodic bouts of discolored water and sediment have frustrated customers over the past decade. Pressed by residents, town officials are considering a takeover of the company, and residents are asking top state officials for help, including Gov. Charlie Baker.

The DEP in 2020 issued the aging company a long list of required upgrades and changes to the system that are still a work in progress, Mercer has previously said. The agency has deemed the water safe to drink.

The HAA5 levels raised concerns, though it appears to be temporary. The results are averaged out for the year and should not exceed 60 parts per billion, according to the DEP. That level reached 103 ppb in October. The 2021 average was 73 ppb, but in 2020 levels averaged 37.4 ppb for the year, for instance.

The DEP learned of the elevated levels on Dec. 20.

In January, the DEP asked the waterworks to study why HAA5 levels were elevated last year and come up with a plan by March 9. The waterworks released the test results Jan. 10. It published a study of the problem Feb. 7, saying that record-breaking rainfall in July was a possible cause and that the results were “atypically high,” and have “historically been well below” the maximum level.

HAA5 poses a risk if consumed at current regulation levels over an extended period of time. No one is quite sure exactly how much time in human beings, though. Studies on animals indicate that the cancer risk rises to around 1 in 60,000 for every 10 years of exposure, according to an online fact sheet from the New Hampshire Department of Environmental Services.

Researchers in a 2019 study in the International Journal of Environmental Research and Public Health said that while disinfected drinking water is a “major source” of haloacetic acids, assessment of exposure and risk is “under-researched.”

Levels of a compound linked to cancer are still elevated in Housatonic water, but below a spike in 2021

There's been progress in reducing chlorine byproducts since a spike in 2021. But levels are still above what regulators think is safe over time.