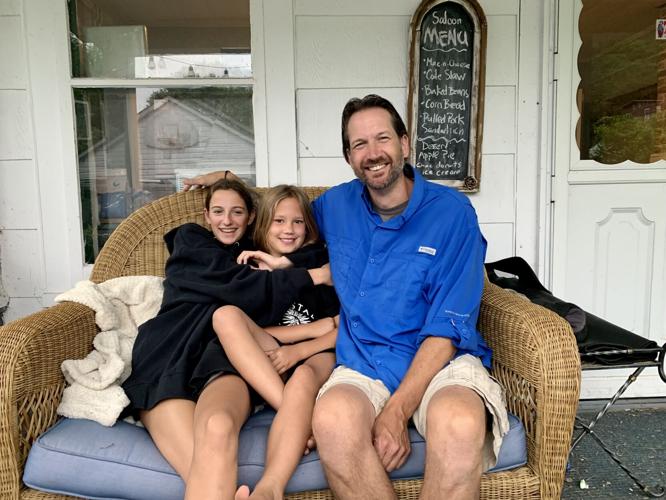 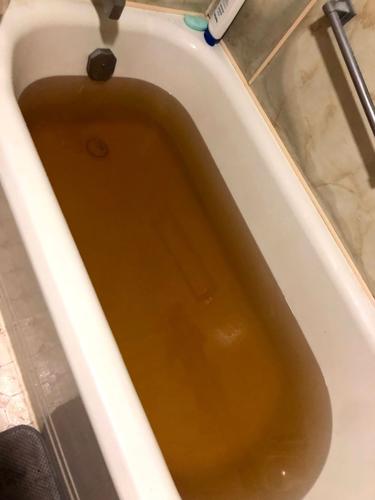 The first bath the Curlettis ran when they moved to their Housatonic home in 2017.

GREAT BARRINGTON — The first time Jack Curletti drew a bath for one of his children at his Housatonic duplex, the water ran brown.

“It’s really just kind of a symbolism thing. If the court orders that I pay, of course I’ll pay. I don’t see how something is going to get done if people just continue to pay their bills.” Jack Curletti, Housatonic resident

His daughter, Sophia, refused to get in.

Since he bought the place in 2017, tap water has varied from clear to yellow to: “It looks like you filled the bathtub with coffee.”

“It’s sporadic. It’s hit or miss,” Curletti said. “We have four kids that live here. They don’t want to check the water status every time.”

The family drinks bottled water. Curletti worries about health risks for his tenants and the rest of the community.

In protest, he stopped paying his bill around November 2020. On Monday, Housatonic Water Works Co. took him to small claims court for an unpaid $1,869.14 and $50 in court costs.

The magistrate at Southern Berkshire District Court did not yet order him to pay. First, he said, he would do some research about the safety of the water, based on some of the reports Curletti had provided showing elevated levels of haloacetic acids, or HAA5, a compound linked to cancer.

The magistrate said because regulators say the water is safe to drink, Curletti might have to pay.

Curletti isn’t alone. At least one other resident had a hearing for the same reason, while another had a hearing that was partly because of non-payment.

Several other residents who are customers of the waterworks have told The Eagle they’ve also stopped paying. They haven’t been taken to court yet.

James Mercer, co-owner and treasurer of the waterworks, would not comment on the specifics.

“People who don’t set up a payment plan or don’t contact us, we don’t have any alternative [but court],” he said.

He also said the company continues to work to resolve problems.

Pressure on the private water company — and on the town to do something about it — has mounted in recent years over the discoloration problem. It is attributed mostly to naturally occurring manganese in the Long Pond water source.

But alarms went off after the company’s announcement in January that haloacetic acid, a disinfection byproduct linked to cancer, had spiked. The company says record rains last July possibly raised levels above the 60 parts-per-billion set by regulators for safety. Elevated levels of HAA5 have been detected sporadically since 2017, and more regularly since last August. Those levels have decreased ever since. 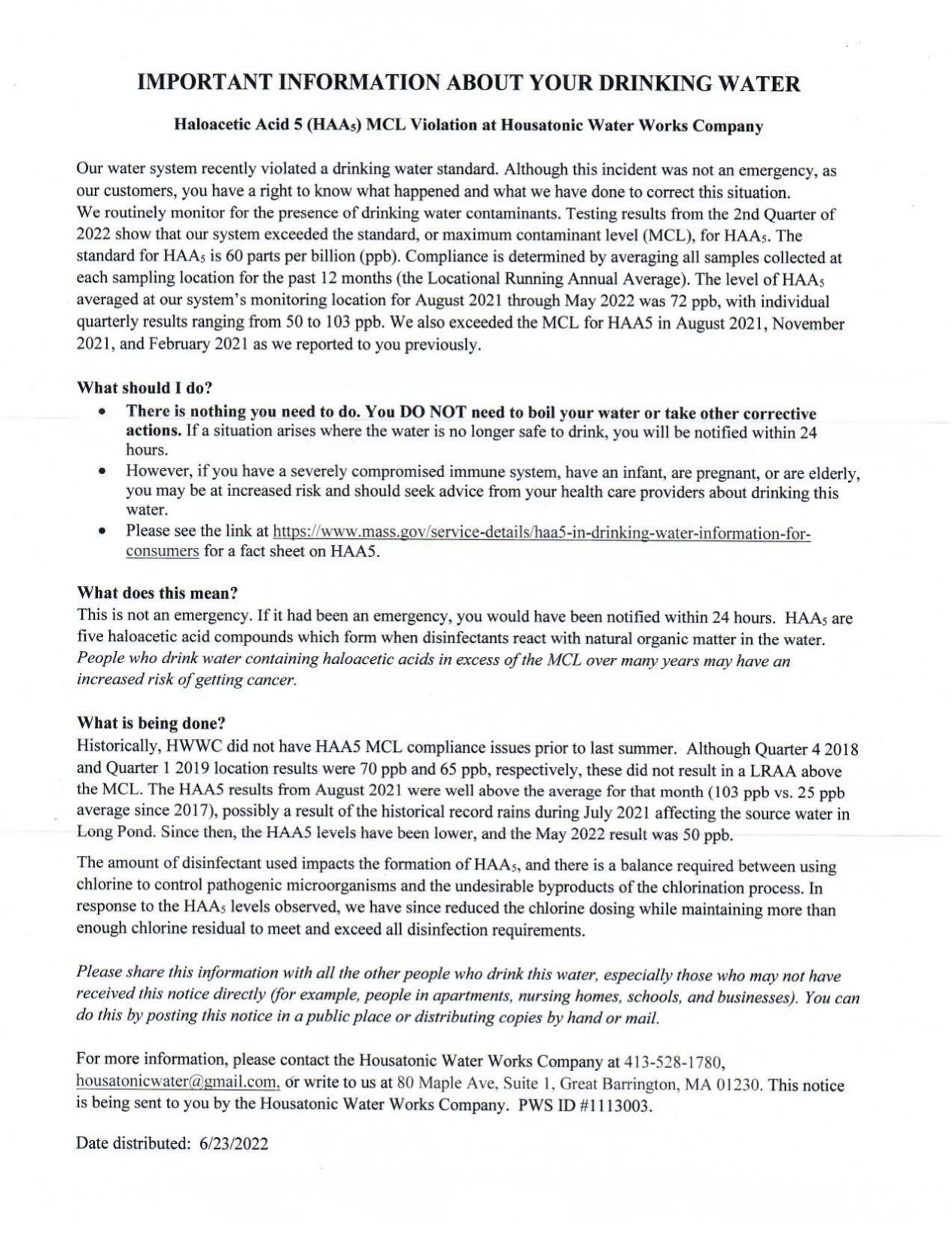 Last month the water tested at 50 ppb. By comparison, the Great Barrington Fire District water had a 1.49 ppb in August 2020 — the last time testing for HAA5 was required for the publicly funded utility. Housatonic’s water in 2020 ranged from 28 to 44 ppb. The fire district has different testing requirements than the waterworks.

The Massachusetts Department of Environmental Protection required the company to come up with a plan to fix the haloacetic acid problem, and that appears to be working, Mercer says.

The DEP continues to say the water is safe to drink, yet residents are not convinced. The waterworks’ required notices to its customers say that the immune compromised, pregnant, elderly and infants could be “at increased risk.”

Meanwhile, people like Curletti and his family are living with the fallout of decades of underinvestment.

A pilot study is underway to test a new filtration system that will take care of discoloration. That new system, if approved by DEP, will result in a rate increase, Mercer said.

But Mercer reiterated again that the town’s objection to rate increases had convinced the state Department of Public Utilities to object, derailing upgrades. A sharp increase in 2016 prefaced an overhaul of some mains.

“Historically the water company has been proactive in putting projects out there to be done since the 1980s,” Mercer said. He said the company looks forward to working with the town to deal with manganese and pressure issues.

One longtime Select Board member disagrees with Mercer’s analysis.

“As an intervenor, we can have our concerns [about the rates], but it’s the Department of Public Utilities that makes that decision,” said board Chairman Stephen Bannon. “I don’t think it’s fair to blame the town for not having the improvements done.”

The town has asked Gov. Charlie Baker for help, and residents have sent Baker petitions.

“It’s really just kind of a symbolism thing,” Curletti said. “If the court orders that I pay, of course I’ll pay. I don’t see how something is going to get done if people just continue to pay their bills.”

The others who have stopped paying did not want to speak publicly about this. Curletti said his not paying has caused other problems. It’s prevented him from getting solar panels on the roof, since the solar company checked his utility credit.

It troubles Curletti that this product is not only flawed — it’s the only choice in town. And he’s perturbed to be buying so much plastic. He buys water in big jugs at the hardware store.

When they run out, the kids won’t drink water and instead will go for soda.

Not paying, Curletti said, is a fairly painless way to protest all this.

“I’m not going to jail,” he said. “They don’t have debtors’ prison anymore, luckily.”

Health officials are concerned about the impact consuming Housatonic water might have on the young, the old and the ailing. They plan to press the Select Board to do something about it.

A state regulatory agency and the Housatonic Water Works Co. blame each other for a delay in installing equipment that will test a filtration system that could fix the problem of brown or yellow water. Meanwhile, residents continue to protest.

The allocation to Great Barrington is meant to bring relief to customers of the Housatonic Water Works Co. who are having to buy bottled water and filters as they deal with discoloration and other issues linked to health problems.