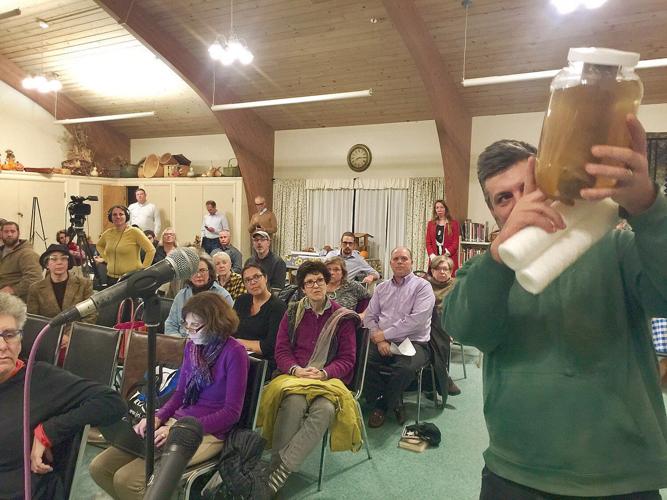 In 2018, Nathan Turner shows the Great Barrington Select Board the water from his home faucet. The town has begun ramping up efforts to solve problems caused by Housatonic Water Works Co.'s aging system. 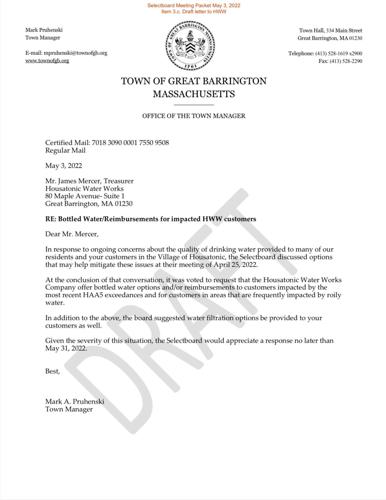 A draft copy of of the letter that Great Barrington officials are sending to Housatonic Water Works Co.'s James Mercer.

GREAT BARRINGTON — Residents who use Housatonic water might get reimbursed for filters or bottled water, if town officials get their way.

A group of residents are now circulating a petition to Baker, Attorney General Maura Healey and other state officials and regulators asking for a takeover by eminent domain as well as other measures.

Drinking water concerns prompted the town on Tuesday to ask Housatonic Water Works Co. to pay for bottled water and filtration systems for residents, or reimburse them for those items.

The Select Board approved a draft letter from Town Manager Mark Pruhenski to James Mercer, co-owner and treasurer of the company, to ask the waterworks to help residents who struggle with frequent bouts of discolored water that is sometimes as dark as coffee.

The letter also cites recent instances of elevated levels of a chlorine byproduct linked to cancer that exceeded a safety threshold set by regulators.

The levels of that compound, haloacetic acid, or HAA5, appear to be falling, according to the company. The waterworks says it was an anomaly sparked by record rainfall in July.

Board member Garfield Reed wanted the language in Pruhenski’s letter strengthened to say the town expects a response from Mercer.

Mercer did not return a call this week requesting comment about the letter and whether the company would be willing to help residents with the expenses.

Pruhenski said the town continues to work with legal counsel on a possible takeover of the private company, after getting no help from regulators like the state Department of Public Utilities. Officials also had previously written Gov. Charlie Baker and Attorney General Maura Healey for help, to no avail, they say.

Meanwhile, a group of residents is now circulating a petition to Baker, Healey and other state officials and regulators asking for a takeover by eminent domain as well as other measures. That petition is also online.

What are residents petitioning for?

A petition to Gov. Charlie Baker, Attorney General Maura Healey as well as regulators and lawmakers asks for the following:

Residents for Clean Water authored the petition as well as a survey distributed by postal drop asking residents for health information to determine whether there is a cancer cluster in Housatonic.

Community concerns about the company’s aging system have reached a fever pitch in the last few years over bouts of “roily” water that the company says are caused by excessive manganese in the Long Pond source.

The January revelation of elevated HAA5 gave residents newfound worry about safety. The company’s notice said those who are vulnerable should speak to their doctor about whether they should drink the water.

Does Housatonic have a cancer cluster? Residents are on a mission to gather evidence

Despite longtime assurances from regulators that the water is safe to drink, overall suspicion and worry about the safety of the water persists in the community. The state Department of Environmental Protection in 2020 gave the company a long list of what needs fixing and replacing in order to continue providing safe drinking water.

Animal studies indicate that it takes many years of exposure to HAA5 to develop health problems. But some researchers have said that the correlation in humans is understudied.