GREAT BARRINGTON — As Housatonic drinking water continues to deeply concern residents, regulators this week imposed new rules and a timeline for controlling cancer-causing chemicals and preventing another spike in those levels.

"All of our actions are, you know, based upon health standards and the science associated with that and the risks associated with it." Brian Harrington, the DEP's deputy regional director

Officials from the Massachusetts Department of Environmental Protection also attended a Board of Health meeting Thursday to answer questions from board members. Their answers infuriated residents who said the agency makes them feel caught in a bureaucratic vise. They said the agency isn’t taking hard enough stance with the Housatonic Water Works Co. as problems caused by manganese, chemicals and old pipes persist.

DEP officials Brian Harrington, Deidre Doherty and Mark Smith told the board they are treating the waterworks like any other water supplier with regard to managing elevated levels of manganese that, in part, turns the water shades of yellow-to-brown. Same with haloacetic acids, or HAA5. Those are disinfection byproducts that are linked to cancer and spiked last year after heavy summer rains.

They said manganese and HAA5 levels are not an “imminent public health threat,” and that the agency’s standards are based on research.

“All of our actions are, you know, based upon health standards and the science associated with that and the risks associated with it,” said Harrington, the agency’s deputy regional director.

These standards called for a new level of enforcement with regard to HAA5, which poses a long-term exposure risk. The levels had breached DEP safety levels in August 2021, before falling.

Thus a consent order from the agency that was effective on Oct. 4. 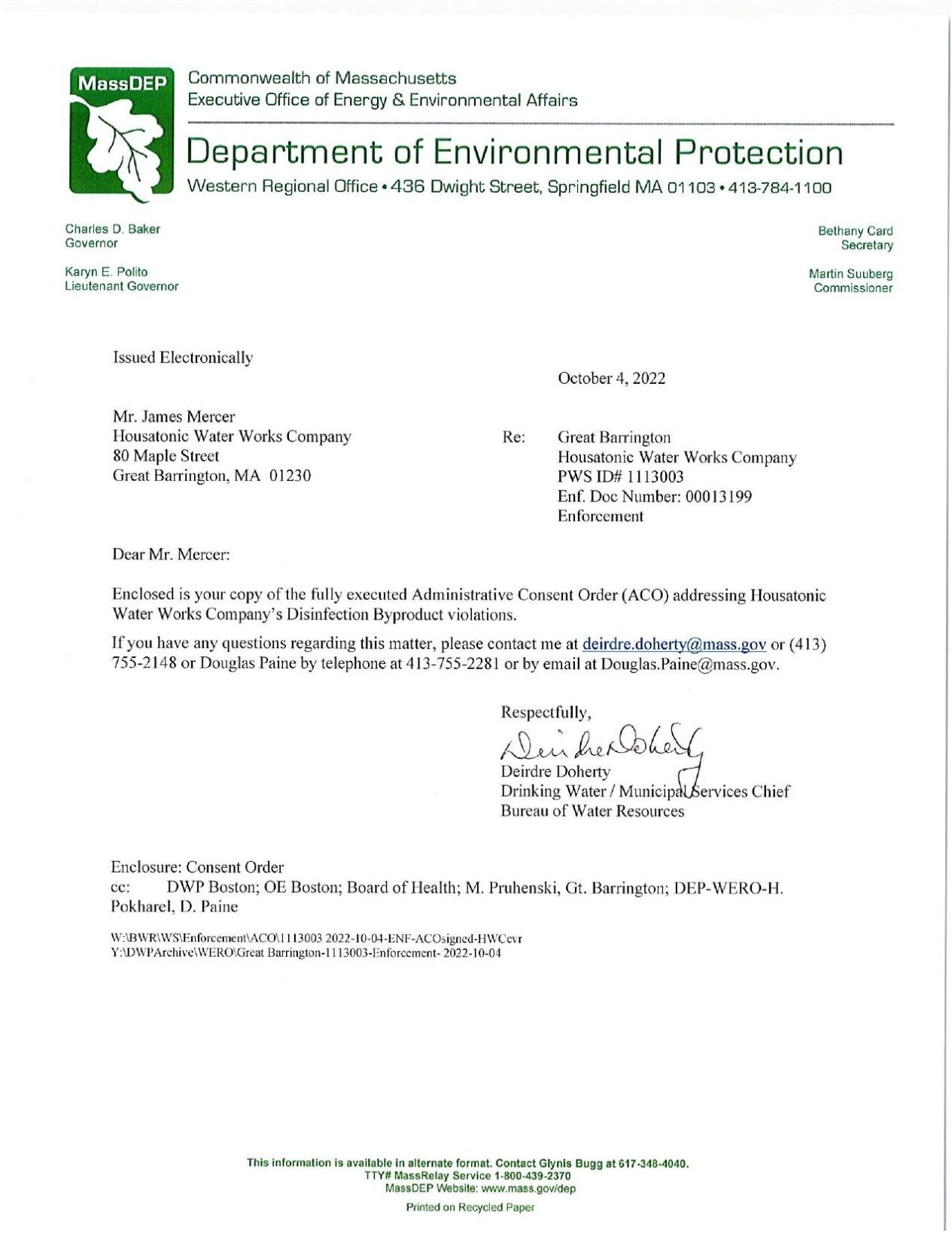 The order puts the waterworks on a 45–day timeline to lower its water tank levels to reduce “water age,” then evaluate whether this causes a reduction in HAA5 levels.

It will also have within 150 days to produce a slew of reports by an engineer that include ways of preventing the problem in future, and extensive details like cost estimates.

In the order, the DEP also questions the effectiveness of a greensand filtration system in removing HAA5.

The waterworks is right now using the greensand system to test for the removal of manganese — one of the culprits behind yellow-to-brown water that has persisted for years and grew worse last summer. Treasurer and co-owner James Mercer said that, so far, the system test is working well.

Mercer’s father, waterworks co-owner and president, Frederick Mercer, signed off on the order between it and the DEP on Sept. 29.

The order comes as more town officials are looking for answers about any health risks posed by the water amid residents’ fury over a summer of browner water than usual.

More on the consent order

In the consent order, the DEP also says the company did not timely submit a report about how it would fix a future spike in HAA5, and didn’t produce a solution the DEP thought entirely feasible in the long term.

“MassDEP finds that [the waterworks] system has demonstrated that it is susceptible to increases in HAA5 levels during severe weather events, and that basing future HAA5 compliance on weather stability is not a viable long-range plan to prevent future violations,” wrote the DEP’s Deputy Regional Director Brian Harrington.

The Select Board has been meeting in closed-door sessions to navigate legal solutions that include a possible purchase of the company. The board issued a statement Monday saying it was working toward a solution.

That followed a letter from the waterworks to customers last week suggesting solutions, including connecting the mains with those in Great Barrington’s system.

The Finance Committee is mulling the creation of a fund to help residents with the costs of bottled water and other related expenses.

While levels of the HAA5 have fallen since they spiked after record rainfall in July 2021, the DEP said in a Sept. 28 letter that the waterworks should find alternative water for “sensitive” people like the elderly and vulnerable.

The waterworks in a notice earlier this year said vulnerable people should consult with their doctor before drinking the water.

The DEP has always deemed the water safe to drink and bathe in, despite the color. HAA5 levels are a mostly separate issue from the discoloration, which is attributed to elevated levels of manganese in the Long Pond source and buildup of the mineral in the old pipes.

At the board’s Zoom meeting, DEP officials said they see water systems across the state that are struggling.

“It’s expensive to maintain and operate and ... we see a lot of deferred maintenance,” said Mark Smith. He mentioned that water utilities are eligible for loans to make upgrades from the state’s revolving loan fund, but there are no grants available for the waterworks. Upgrades and related rate hikes are the purview of the Department of Public Utilities.

Brian Harrington said there is “a lot of back and forth” with a water supplier to get them in compliance and that “fines and punitive measures are sort of the last resort.”

They said residents doing their own testing isn’t going to move the department to act; it has its own method and testing timeline. They also said residents have to make their own decisions about whether to drink the water.

Housatonic residents lashed out after the DEP officials left the meeting.

“I don’t know what the last resort actually is,” said Trevor Forbes, adding that he’d like them to drink the water. “It was largely platitudes, a lot of bureaucracy, a lot of buck shifting.”

“I don’t care what happens to property values,” she said, referring to recent community concerns about this. “I am so sick and tired of it all ... I’m going to rent a billboard and hang it up from the top of everywhere I can.”

Will this big utility buy Housatonic's water system? Great Barrington and the company are exploring it

As they cast around for solutions to the Housatonic water problem, Great Barrington town officials invite Aquarion Water Co. to the table for a discussion.

The allocation to Great Barrington is meant to bring relief to customers of the Housatonic Water Works Co. who are having to buy bottled water and filters as they deal with discoloration and other issues linked to health problems.

With one exception, every test run with the filter cleared manganese from Housatonic water to undetectable or nearly-undetectable levels, said the waterworks' engineer.

Yes, hold out hope on a new filtration system and keep one eye on Aquarion — but now is not the time to be dismissing out of hand the potential solution of the town water system taking over Housatonic Water Works.