SANDISFIELD — When people arrived at Town Hall for Monday night’s Select Board meeting, they found an envelope on the table with board member Mark Newman’s resignation letter inside.

It is the fourth departure from a town office in two months, and Newman resigned on what was the last day of Dolores Harasyko’s 26 years as town clerk here.

His resignation is the latest controversy to roil the town after a spring of discontent over a commercial pot cultivator’s plans, disagreements turned caustic, and followed by the sudden announcement that Town Administrator Joanne Grybosh would resign and Harasyko would retire. It didn’t take long before Assistant Town Clerk Pauline Bakunis also said she was quitting.

Then came the mini audit revealing that the town’s books are askew. The Sandisfield Times published a draft copy of an accounting consultant’s report that found a $7,712.52 difference between what the town’s accountant recorded in the general ledger and what the town’s treasurer had written in its book. The report, the final draft of which will be posted to the town website this week, also showed other financial gaps and problems. 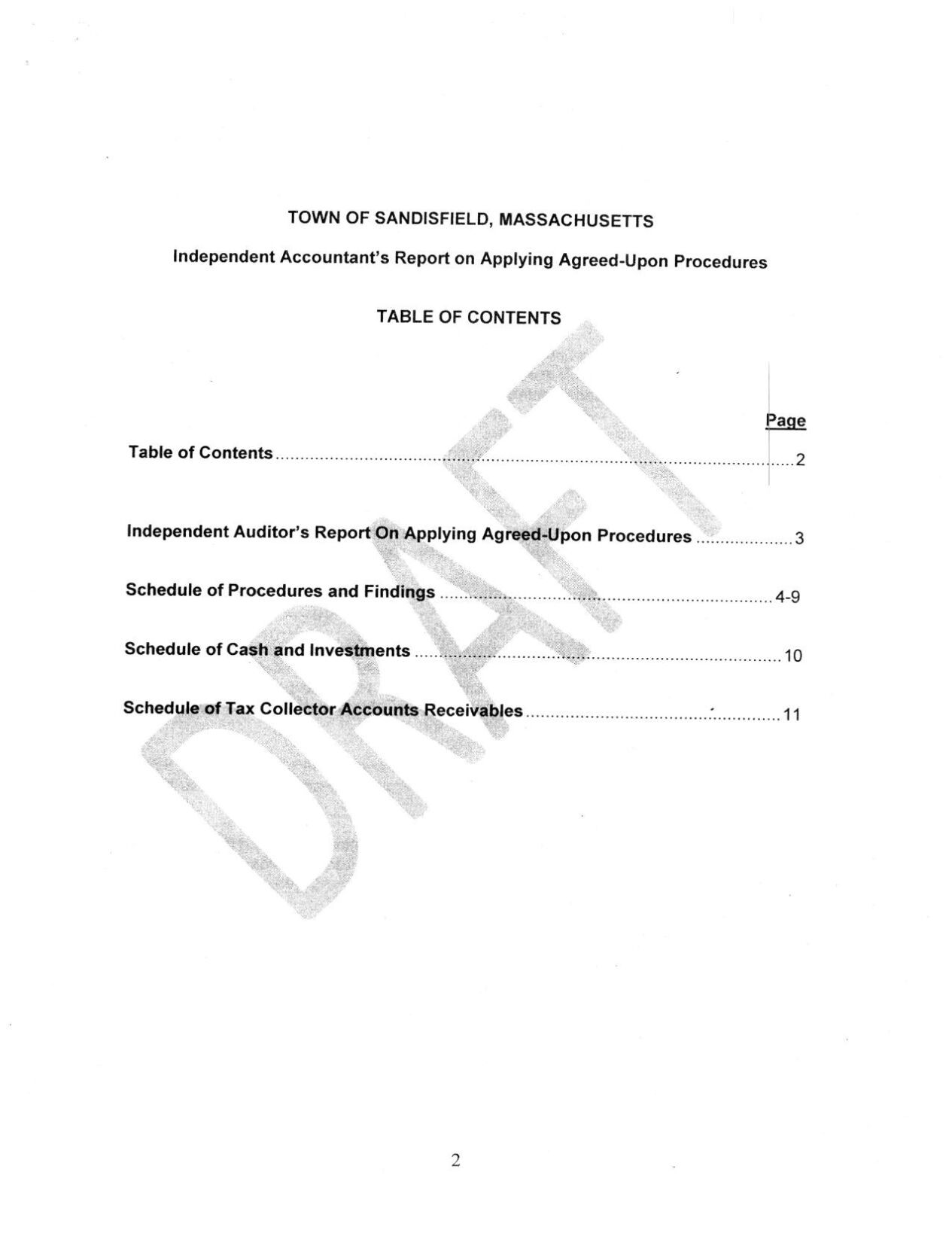 The May 28 report by Scanlon & Associates of South Deerfield recommended monthly reconciliation of the books as well as better organization by those who handle the town’s finances, to avoid the risk of “misstatement due to error or fraud” that goes undetected.

Town officials say they plan to rectify this.

“I find the result something that is serious, and we need to make serious efforts to address every aspect of the auditor’s report,” said Roger Brown, chairman of the Finance Committee. Brown had asked for this report, meant to hone in on problems found in a full-scale financial audit five years ago, and to correct them before conducting a new audit.

“I think it’s a serious error, and we just need to make sure we have a plan to resolve all the issues,” said Select Board member Alex Bowman.

The board had planned to discuss the problem at its Monday meeting, which was canceled because of a quorum issue since Bowman was joining the meeting remotely. In hindsight, members learned that COVID-19 rules still allow boards to bypass traditional quorum regulations.

‘Things are in flux’

In his resignation letter, Newman accused Select Board Chairman George Riley of an open meeting law violation regarding the posting of a meeting. Newman did not return a call for comment, but Riley said the alleged violation isn’t one, and that Newman’s real reason for leaving is an ongoing disagreement with Riley over the scope of the town administrator’s role as a committee embarks on a search for a new one.

Unlike Riley, Newman objects to an administrator, rather than the board, having the authority to supervise town staff. Riley says this model has been a “disaster” at Town Hall, and he regrets letting Newman “talk me into” hiring an administrator without giving her authority.

Riley said the town likely will hold a special election in September for a new board member. Meanwhile, the town will tend to its books, he said, and will search for new staff.

“Things are in flux,” he said.

Who's minding the town? Sandisfield Select Board chair offers to fill leadership void on interim basis

The chair of the Sandisfield Select Board has offered to serve as interim town administrator while the town searches for a permanent successor to Joanne Grybosh, who resigned last month.

Yet another Sandisfield employee resigns amid problems with Town Hall's books. This time, it was the tax collector.

Sandisfield's Select Board has a new member. He says he'll use his skills as a contractor to get things done.

He knows how to drag a project across the finish line, and he knows how to manage people. Meet Sandisfield's new Select Board member.

The town has hired two people for critical Town Hall positions, filling gaps after a series of departures shook the small municipality and left it scrambling.