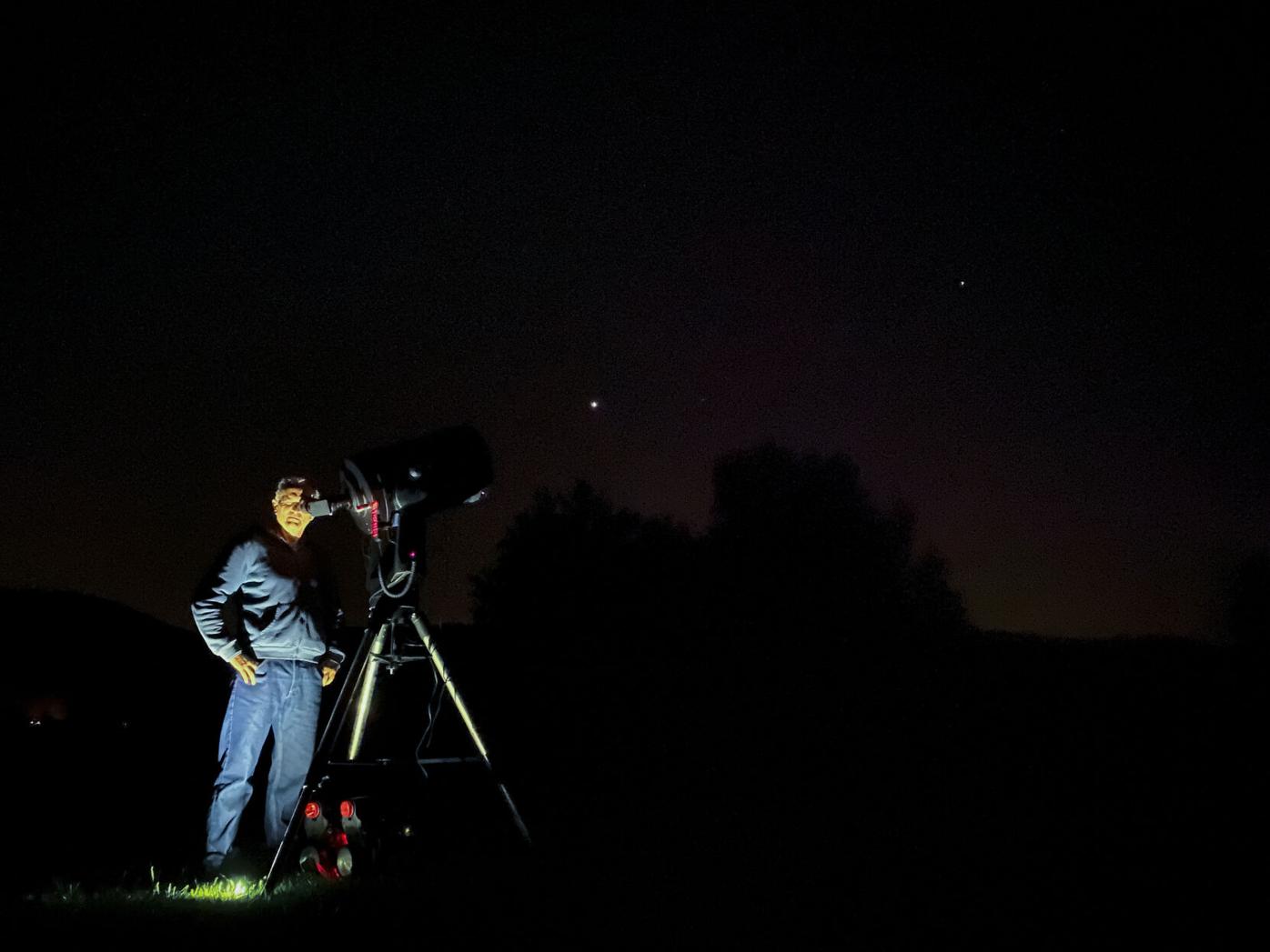 “About 95 percent of the people I meet have never looked through a telescope,” says Rick Costello, of Stockbridge, who leads stargazing events throughout Berkshire County. 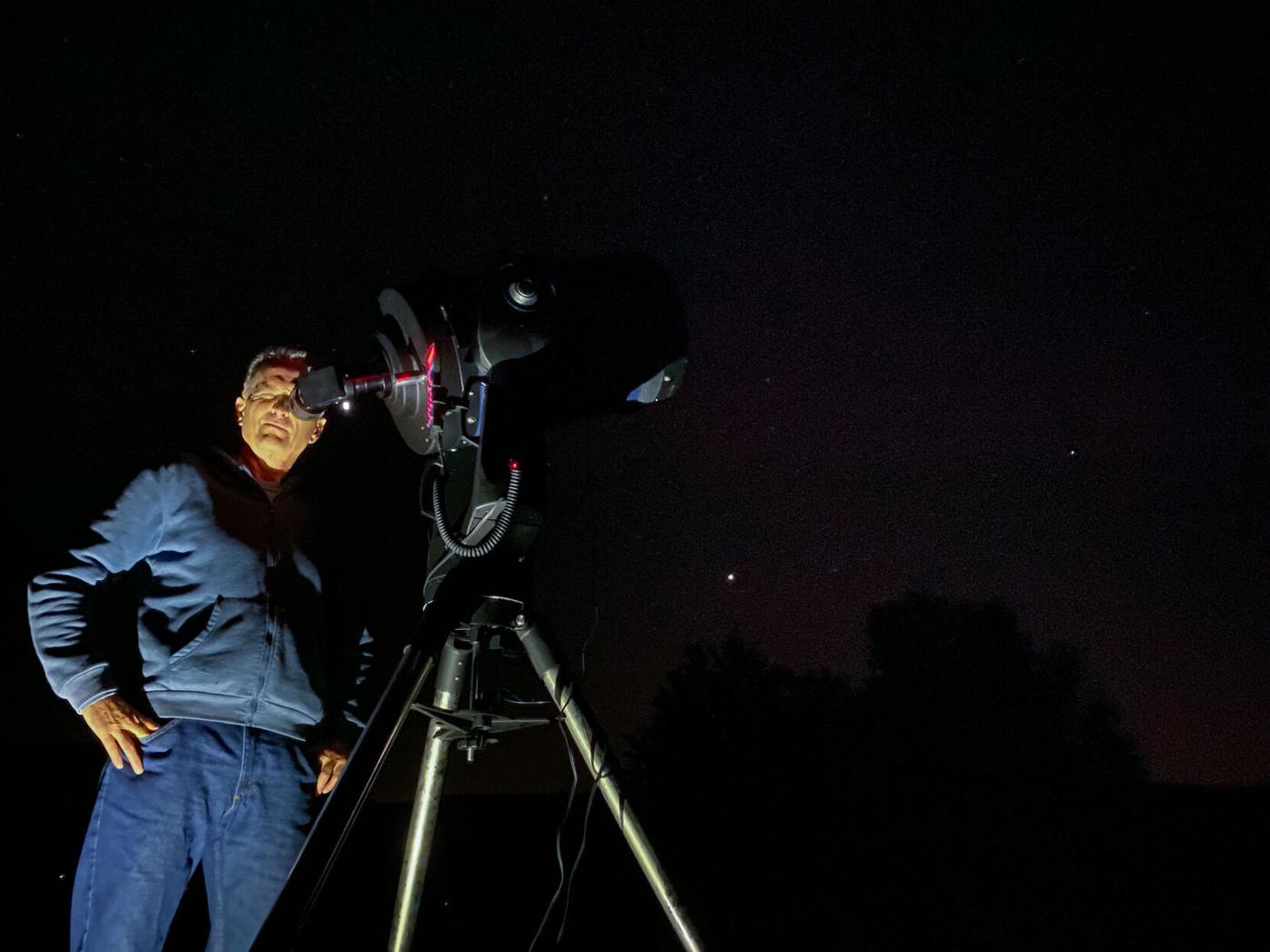 Rick Costello, an amateur astronomer, leads stargazing events throughout Berkshire County. Costello, shown on a recent night at Chestnut Preserve in Stockbridge, feels obliged to show people the world above their heads because, he says, “I have a good telescope.”

“About 95 percent of the people I meet have never looked through a telescope,” says Rick Costello, of Stockbridge, who leads stargazing events throughout Berkshire County.

Rick Costello, an amateur astronomer, leads stargazing events throughout Berkshire County. Costello, shown on a recent night at Chestnut Preserve in Stockbridge, feels obliged to show people the world above their heads because, he says, “I have a good telescope.”

STOCKBRIDGE — Maybe you’ve seen him. In his natural habitat, a moonless evening, he’s a black silhouette on our tilted planet, a tour guide to the stars.

Dear earthlings, he’s here with a public service announcement: The universe is huge and old and the only sane response to it is humility.

Beneath the twinkle of a trillion mysteries, people gather around him. They come to meet him on Baldwin Hill in Egremont. By the library in Great Barrington. By the pine-back pulchritude of October Mountain. Black silhouettes of the very same species gather on chilly evenings, and in baffled puffs of disintegrating steam they’ll ask him:

How did this all come to be?

Have you ever seen alien aircraft?

Is there a God?

Kind and curatorial, he will not wince when they wonder, “Wait, you mean our sun is a star?”

This is precisely why he’s here — to educate an astronomically illiterate population.

Rick Costello is his name. He rents an apartment in Stockbridge. He was born in 1960, raised in Connecticut. By the age of 4 he would borrow his father’s binoculars and squint to see the craters of the moon. As a grown man, he delivered packages for a parcel service. But, by 2012, he left it all. He fled the gazillion lightbulbs of the lowlands to settle here in the Berkshire hills, enticed by good friends and dark skies.

Nowadays, as evening descends, he pulls up to various locations in a Subaru, his tailgate pointed toward infinity. He unloads 120 pounds worth of equipment: lenses, a tripod, and a telescope capable of eavesdropping on Andromeda.

Our galaxy has about 1 trillion stars. There are hundreds of billions of other galaxies in the observable universe. That roiled collar of light overhead, our Milky Way galaxy, is about 1,000 light-years thick and more than 100,000 light-years across. It rotates at 600,000 mph. It takes about 225 million years for our solar system to make one full rotation around the galaxy.

Costello keeps a tip jar lit up with a small flashlight because we all need to eat.

Even as his mind is made eccentric by the gravitational perturbations of the cosmos, Costello remains firmly grounded, a citizen of Earth.

He paints. He likes to kayak.

“If you look at any picture of the Garden of Eden, it’s here. It’s Earth,” he says. “This is heaven, people.”

Heaven has another 5 billion years before the sun swallows it whole.

The one and only downside to his late-night celestial rubbernecking is that he’s rarely rousable to see the sunrise, which he adores.

But, that’s the consequence of a decision he made in 1994. Costello, an amateur astronomer, never formally trained — though he reads, reads, reads and reads — before he began doing telescope shows anywhere and everywhere.

He feels obliged to show people the world above their heads because, he says, “I have a good telescope.” It’s a Meade LX 90, a 12-incher, a $3,000-plus investment, and it includes a defogger.

“About 95 percent of the people I meet have never looked through a telescope,” Costello says. “I find that a shame — to have never seen Saturn or Jupiter.”

On a recent evening, at the Chestnut Preserve off Route 7 in Stockbridge, he has everything set up. The storms of previous days had swerved out of town, taking with them the smoke from Western forest fires and leaving behind a perfect evening, clear — “One of the best nights I’ve seen,” Costello says.

The center of the Milky Way is right over there, between two trees.

A meteor etch-a-sketches through the atmosphere. There’s more where that came from, and where that came from was from a comet, Swift-Tuttle. To spend time with Costello is to be introduced to many new vocabulary terms, many new proper nouns and many mind-bending realities.

You will not be tested. Ideally, for Costello, you will walk away from his telescope to learn more about the world we live in so that when you meet him again, he’ll have someone he can talk with.

Enjoy stargazing in the Berkshires? Then you should be worried about light pollution, astronomers say

It gets lonely when you’re one of only a few people aware that our solar system is pogo-sticking toward Hercules, toward 250 light-years above the pancake-shaped plane of our galaxy.

It gets lonely when your mind rattles with the knowledge that everything that we see and all that we physically are — the iron in our blood, the calcium in our bones — is made up of elements from exploded stars.

Where should one file such information? Between remembering to pay the electric bill and the date of your mother’s birthday? Where?

And no, he doesn’t believe in God, or at least in a creator who holds us at the center point of existence.

“I look at it this way,” Costello says. “The universe is 13.8 billion years old. Each billion years is a thousand million, you know what I mean? It’s incredible how much time that is. By the time the Earth was formed 4.5 billion years ago, our galaxy was already over 9 billion years old. And humans have only been here for maybe 250,000 years. That seems like a long time for us not to be here to make everything all about us. I’m not a believer, no.”

Alien life? He’s a believer. He says that on precisely eight occasions he’s seen objects in our atmosphere that cannot be explained, in the Berkshires, in Vermont and in Connecticut.

What’s the scariest thing he’s seen out on a dark night stargazing? A mountain lion, right over there by the wood line. It just sat there one night staring at him.

As to all this — creation — how does he think it all came to be?

“Who knows?” he said. “We’re not going to know the answers for a long time.”

In the meantime, when he peers out into space, he’s reminded of the very thing that cannot be disputed: that humans have an obligation to care for this common home, Earth. We are failing, he says, and our failure is "disgusting."

“We’re not special here. If the Earth doesn’t like us, it’s going to get rid of us,” he says. “Species are becoming extinct every day. Most of this is caused by us. If you ruin the ecosystem, eventually it’s going to get us. It has to be talked about.”

But, right now, he wants to talk about the closest star to our solar system. His telescope whirs to face Proxima Centauri.

“Check that out,” he says, inviting a look into the eyepiece to gaze and to ponder. Proxima Centauri winks, a faint red flare 4.2 light-years away, or nearly 25 trillion miles.

“Eventually," he says, "it’s going to go supernova. Maybe within the next few hundred thousand years.”

In other words, soon.

Rick Costello will be providing public telescope viewings throughout August and September, weather permitting. For more information on dates and locations, email him at rickcostello8@gmail or visit his Facebook page.