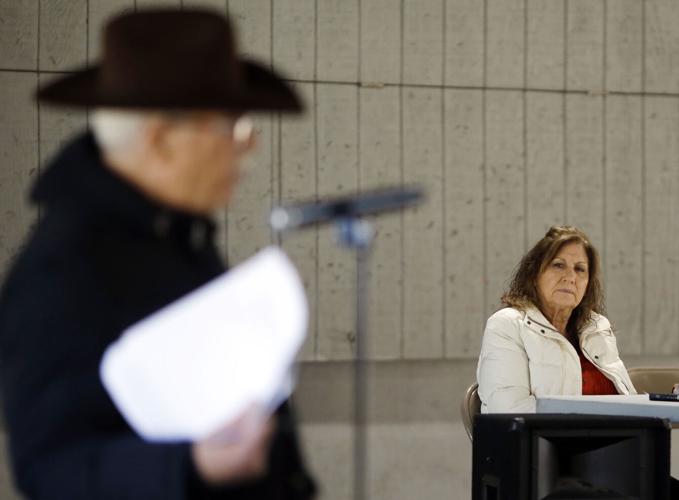 Monterey Town Clerk Terry Walker listens during a special Town Meeting at the Monterey Pavilion last year. Walker filed a whistleblower lawsuit against the town and its officials in September. She has now resigned, claiming ongoing harassment by those officials escalated. 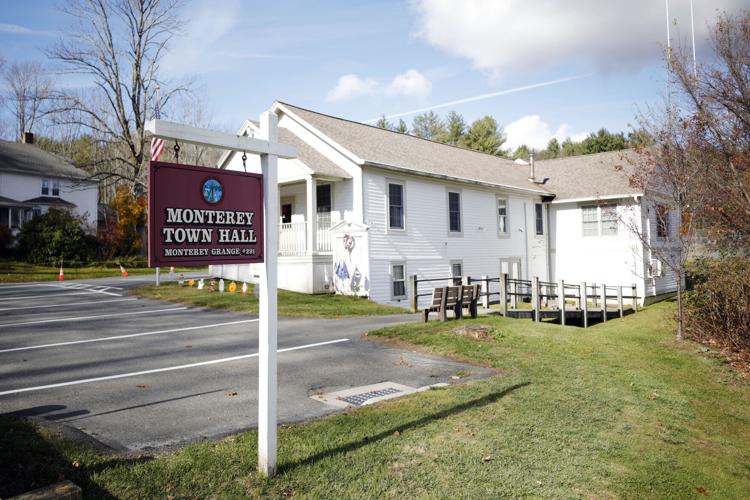 Monterey Town Hall, where political unrest of late has rattled the town. Town Clerk Terry Walker resigned last week citing retaliation in response to her whistleblower lawsuit against town officials and the town.

MONTEREY — Town Clerk Terry Walker resigned last week alleging ongoing harassment she claims is retaliation for filing a whistleblower lawsuit in September against the town and some of its officials.

West Stockbridge Town Administrator Marie Ryan will serve as interim town clerk up to 10 hours a week, though she told town officials she could do the work in five hours a week. Ryan previously was Great Barrington’s town clerk.

In her Nov. 30 resignation letter to the Select Board, Walker said the day after a story appeared in The Eagle about her federal lawsuit, Select Board member Susan Cooper identified six “perceived” work violations by Walker. Cooper submitted them for action against Walker by the board that could include firing.

“These ‘issues’ once again dated back months prior and were raised only after I filed my [legal] complaint,” Walker wrote. She said she had raised issues of a hostile workplace though “proper human resources channels.”

"It appears my words fell on deaf ears," the letter said.

Walker also told Monterey police in a Dec.1 complaint she “feared for my safety” when Town Administrator Melissa Noe allegedly screamed at her and banged on her office door the evening she resigned.

Noe did not respond to questions. One board member disputes Walker’s account of Noe’s behavior that night.

Walker worked for the town for six years, putting in 19.75 hours a week, with an assistant town clerk working for seven hours weekly. In her letter, Walker said new rules were imposed on her alone at Town Hall after she filed the lawsuit alleging harassment and a hostile workplace. These include “Town Clerk Weekly Status Reports” and salary docking when she was out sick or absent for personal reasons.

Walker declined to comment on the situation beyond what is in her letter. She cites “harassment” by Cooper and  Noe. 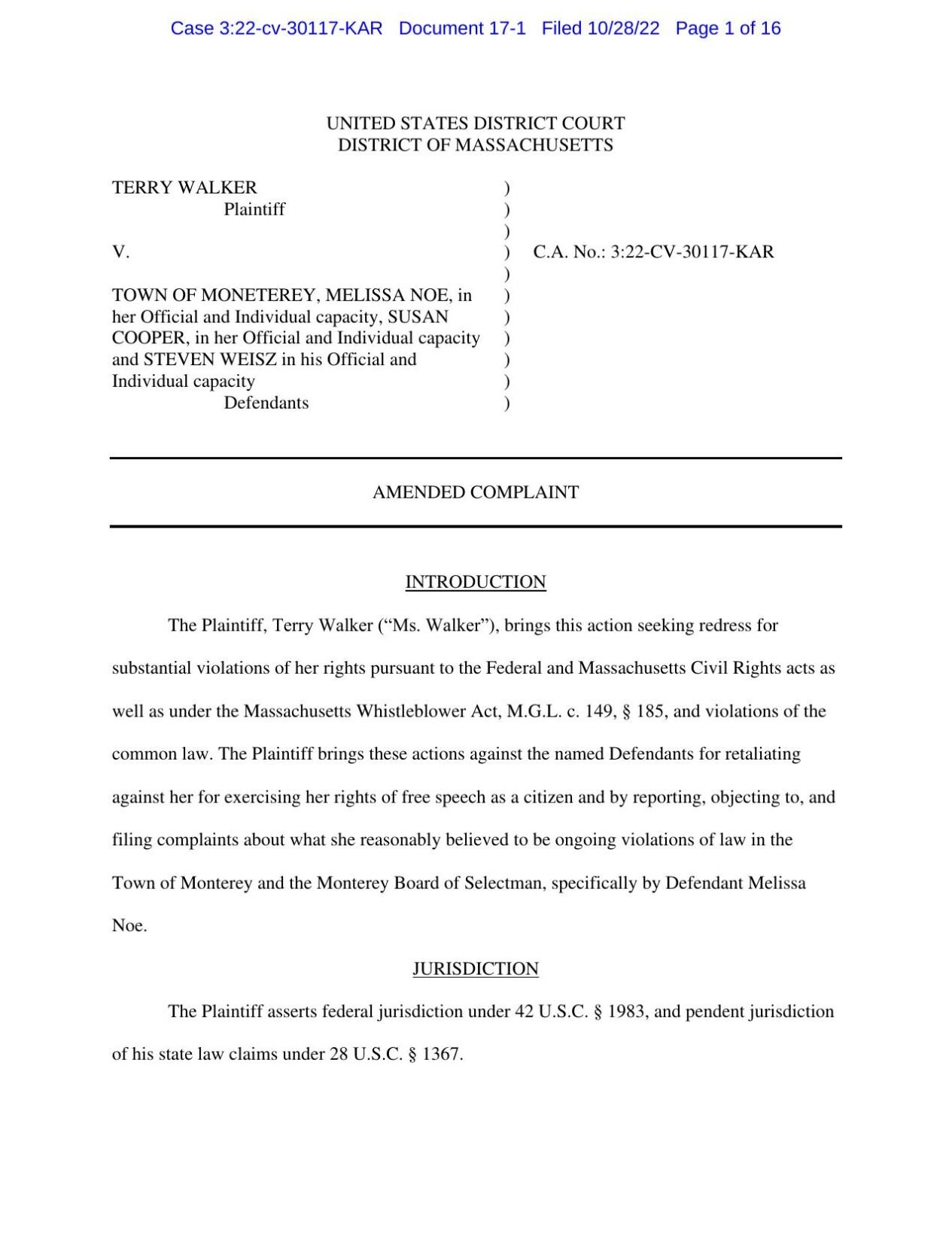 It prompted Walker in October to add Cooper to the lawsuit, filed in U.S. District Court in Springfield. She had previously removed former Select Board Chair Donald Coburn from the federal complaint because he was not a board member during the time of the allegations.

Cooper said she could not speak to any details, given the legal action against her, but said she denies Walker's accusations.

"I can easily refute all of Ms. Walker's claims, but it will have to wait for the courtroom," Cooper said in an email.

Board Chair Justin Makuc declined to answer questions about Walker’s allegations and resignation.

Turmoil at Town Hall dates back more than a decade, but escalated in 2021 amid a pileup of complaints among town officials against each other – including Walker and Noe.

The town paid an investigator more than $21,000 to sort out the disputes. Her report found Noe at the center of conflict at Town Hall. Noe has disputed this and questioned the integrity of the report, which was published on the Select Board’s web page.

The ranks of the Select Board turned over this year, after former Chair Steven Weisz did not seek reelection and John Weingold resigned after fits of outrage and absence at meetings. He claims Town Hall dysfunction is what set him off.

Board member Scott Jensen was in the hall with Noe during one part of the alleged dust-up outside Walker's office, after she resigned. He says Walker’s claim that Noe was violent is false.

“I did not see that nor did it happen,” Jensen said.

At the Nov. 30 meeting, board members appear flustered by Walker’s immediate resignation.

She hands over her letter, keys and other town property, then leaves for her office, a YouTube video of the meeting shows.

Soon after, Noe says Walker shouldn’t be in her office alone and leaves the room at 30:49 minutes into the meeting.

“If she resigned, she shouldn’t be in there at her computer erasing things,” Noe said. “And she won’t answer the door for me.”

Noe leaves again and Jensen, the board member, gets the keys from Cooper and goes to Walker’s office.

When both Makuc and Jensen are out of the room, Noe tells Cooper in a hushed voice that Walker “stole … office equipment” at a previous workplace. Cooper suggests to Noe and Makuc that maybe she should go check Walker’s car.

“I never stole anything,” she said.