GREAT BARRINGTON — A group working to merge Monument Mountain and Mount Everett regional high schools is grappling with tension over that goal. Officials from one district say they feel pushed — and may seek a pause.

“Talking about a school merger is not for the faint of heart and the stakes couldn't be higher. Emotions run deep.”

Lucy Prashker, chair of the panel exploring a high school and district merger

Southern Berkshire School Committee members, in a letter this week to the eight-town Regional School District Planning Board, said they are considering withdrawing from the consolidation. They want to regroup, the letter says, in light of what they call a “negative dynamic.”

The work of the 23-member board should stop until “we address the difficult dynamic between the two districts and the ongoing feeling of imbalance,” the letter says.

The board discussed the letter Wednesday and voted unanimously to hire a facilitator to “unpack” what several people described as discomfort in the Southern Berkshire school community with the tenor and direction of the work.

Laura Rodriguez, one of four Southern Berkshire School Committee members on the board, suggested a facilitator, saying the issues raised can’t be ignored.

“I think that there’s a difficult conversation that we’re not having, and we need to have it,” said Rodriguez, of Monterey.

All 10 Southern Berkshire School Committee members signed off on the Tuesday letter that outlined concerns.

A key element: Some people feel pushed by deadlines of a state program to help fund a rebuild of Monument Mountain. 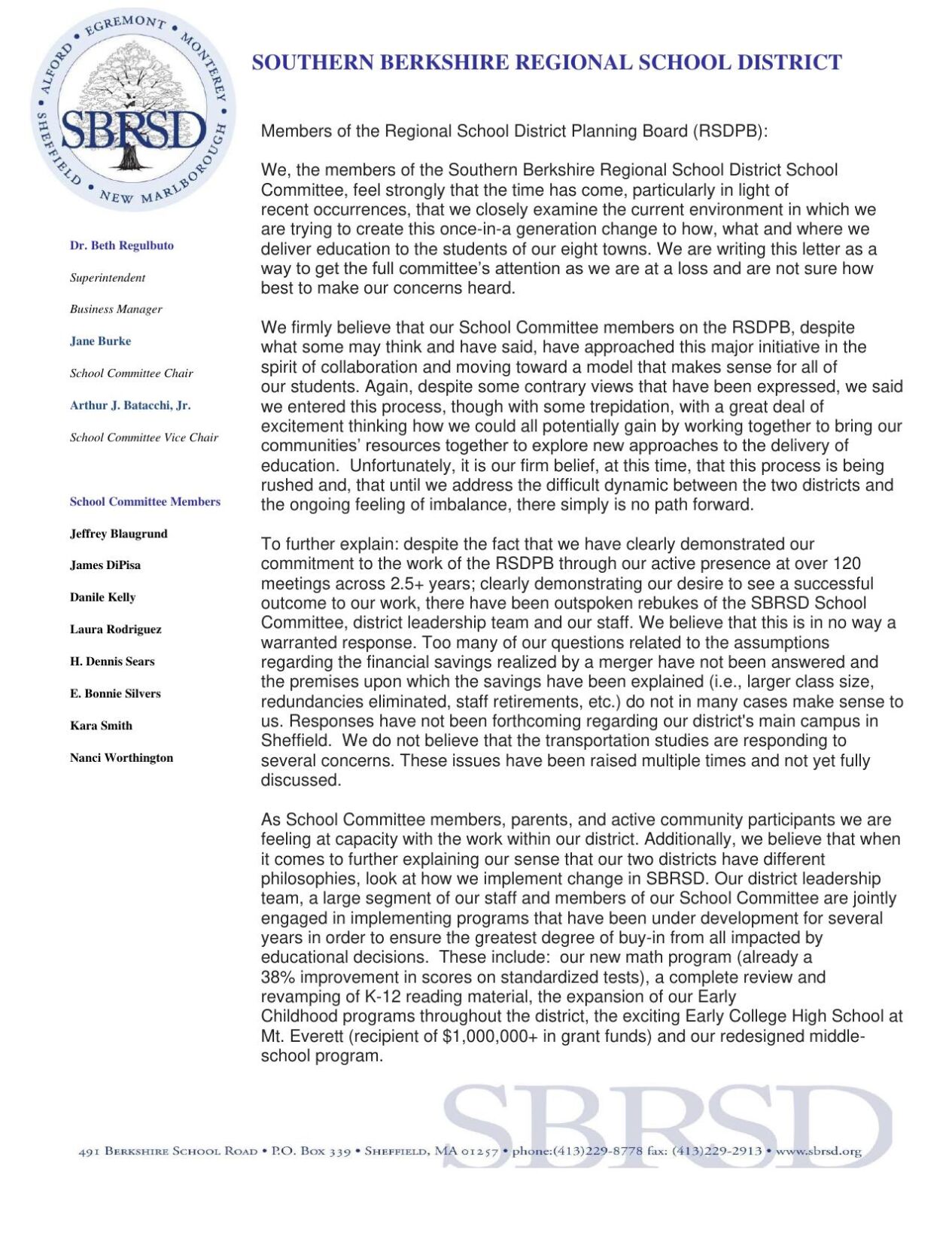 The letter says members on the board from Southern Berkshire are in “a constant state of defensiveness and charged with not cooperating because we are not 100% behind pouring all of our energy into being ‘absorbed’ … and working to create a new Monument Mountain.”

Berkshire Hills plans to run enrollment projections for the new Monument, both with and without students from the other towns, Superintendent Peter Dillon said later. The school has until April 28 to finish its work and submit to the state.

The assumption that Mount Everett students will simply fold into Monument’s academic ethos appears to be a major sticking point.

The board began its work in 2020 to find a way for the Berkshire Hills and Southern Berkshire districts to merge in some fashion. The board voted 16-6 in favor of a consultant’s recommendation to bring the high schools together and create one administrative district.

The elementary and middle schools in the two districts would remain as they are.

With budgets up and enrollments and state funding down, the schools are struggling to control costs while creating more educational opportunities.

Taxpayers in the eight towns served by both districts have chafed at rising bills and pushed for a study of consolidation. The planning board emerged as a study group that will bring its findings and recommendations to the voters of all eight towns.

Past consolidation talks were not easy. There is the sense that Mount Everett might lose its identity and ideals in a merger. A merger also would threaten some jobs.

The board faces complex emotions.

“From the beginning, we sensed an imbalance,” Jane Burke, chair of the Southern Berkshire School Committee, said in a phone interview. “Some aren’t interested in underlying feelings – they just want to get the work done.”

Burke said interruptions and disparaging remarks made towards Southern Berkshire representatives have tainted the panel and left those members “offended.”

Panel member Danile Kelly, a School Committee member from Egremont, said she had found the climate at some meetings “almost cringe-worthy.”

Kelly and Burke said the decorum at Wednesday’s meeting had improved.

Board Chair Lucy Prashker began it with a reminder to respect opinions, to not interrupt and to assume best intentions by those in the room.

Jonathan Sylbert, a board member from Monterey, said discomfort in the community is real and must be considered.

"When I go to a softball game or a baseball game … I feel like I’m a target ... there are things that are being said in our community."

“There’s lots of people in the Southern Berkshire school district — teachers and staff — who are uncomfortable … I think it’s essential that we address that immediately, because we all need to do this together,” Sylbert said.

Southern Berkshire Superintendent Beth Regulbuto said at the meeting that there is more complicating the question of a merger than what’s been expressed. “That’s not the whole picture here,” she said, but did not mention specifics.

“It’s the bigger issue that Beth brought up of what we hear in the community. When I go to a softball game or a baseball game … I feel like I’m a target ... there are things that are being said in our community,” she said.

Burke said it is urgent to repair relations. Two members on each of the school committees involved will be leaving the panel, since they are not running for reelection.

Prashker said later in a phone interview the board has to continue its work and that voters in the eight towns will ultimately make the decision on a merger.

She said she isn’t surprised at the feelings expressed in this week’s letter, given the prospect of such a massive overhaul.

“Talking about a school merger is not for the faint of heart and the stakes couldn’t be higher,” she said. “Emotions run deep.”