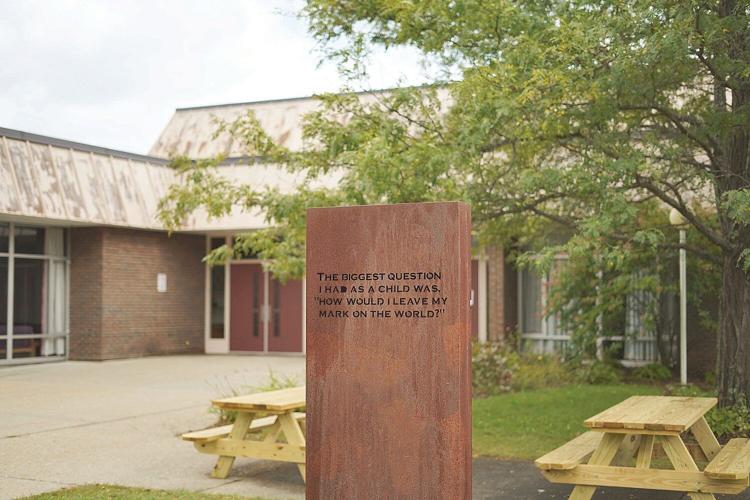 Local officials are working with the state on a proposal to renovate or rebuild Monument Mountain Regional High School, built in 1968. 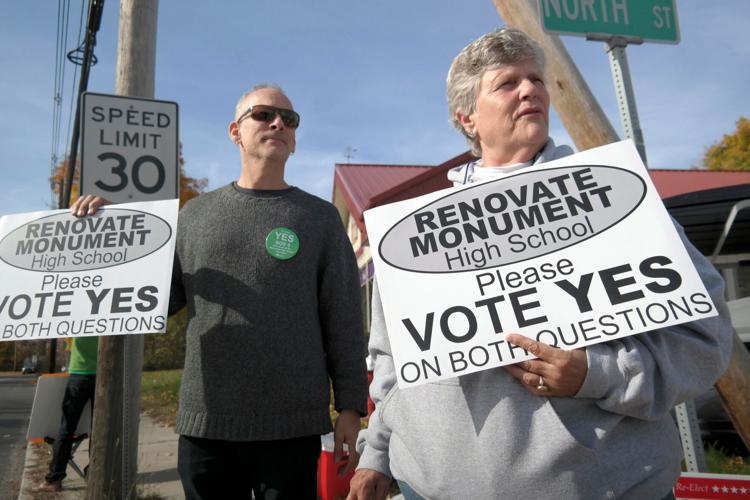 In 2015, supporters hold signs in favor of a proposal to renovate Monument Mountain Regional High School. The project was defeated by Great Barrington. Now, the school is closer to getting money from the state for a new project.

GREAT BARRINGTON — After years of rejection, the community got a shot of hope Wednesday that Monument Mountain Regional High School someday will get a new look, new labs — and a roof that doesn’t leak.

Monument now is eligible to move toward obtaining state money for a new or renovated building, the Massachusetts School Building Authority announced Wednesday.

During the 270-day “eligibility period,” Berkshire Hills Regional School District officials will have to create a local school building committee that will work with the authority “to determine the District’s financial and community readiness to enter the MSBA Capital Pipeline,” agency officials said in a statement.

That will lead to a feasibility study of potential plans subject to approval by the authority’s board of directors.

“This is a huge deal,” said Berkshire Hills Regional School District Superintendent Peter Dillon, noting that 17 schools made the eligibility list and 47 schools were rejected in this round. “It’s a miracle. It’s a once-in-a-generation opportunity. You’ve heard people say, ‘Communities are as good as their schools.’”

The announcement is a relief to school officials whose attempts to fix or rebuild Monument landed them on a decadelong roller-coaster ride of community discord over mounting school budgets and taxes, education and population shifts — all while trying to maintain an outdated, deteriorating remnant of the past and educate students in it.

The district’s application said the building falls short in nearly all academic areas by not supporting modern learning. Automotive, horticulture, early childhood and culinary programs are in danger of losing accreditation and other support as a result.

Also, the building lacks a fire-suppression system. The list of problems goes on, and it includes systems installed in 1968.

This was the district’s sixth application to the authority, two of which resulted in proposals to voters. Both times, in 2013 and 2015, Great Barrington voters sank the plans, mostly over the ensuing increase in that town’s property taxes. Anger over Great Barrington’s greater share of school costs than Stockbridge and West Stockbridge resulted in a deal to lower them in the future for construction projects, thus paving the way for approval of a high school overhaul.

Will a sixth attempt to overhaul Monument High work? We'll find out in March

But, the authority rejected subsequent requests for money, citing concerns about the lack of buy-in from voters and the long list of other school districts competing statewide for School Building Authority money.

In the intervening years, costs have increased significantly. The 2015 proposal pegged the cost at $51.2 million for a renovation/addition, with the Massachusetts School Building Authority footing nearly half the bill.

By 2019, the calculus had changed. A group estimated that a potential 2023 renovation/addition project could cost $70 million to $96 million.

The district is continuing to work with the Southern Berkshire Regional School District on a plan to consolidate or at least share resources. It is unclear exactly how this will factor into the plans. Dillon said variables include projected enrollment, as well as the ongoing mission to expand vocational and technical education.

The district plans to build support and trust, and believes that it’s possible this time around.

“Great Barrington today is very different than it was 10 years ago,” Dillon said. “There’s more growth and revenue, and I think our educational vision is much stronger now.”

School Committee Chairman Stephen Bannon has been on this bumpy ride from the start.

“There’s a long road ahead,” he said, noting that the district still must win support from voters.

“We have to keep our end of the bargain — we have to have the best school possible within a fairly tight economic picture,” he said.

He said the committee had planned to overhaul Monument even if the MSBA rejected the committee. Now, the burden on taxpayers will be shared to some degree by the state. The other good news is that the debt for the new elementary and middle schools will be closed out next year. That should help.

“I hope the towns will put that money aside for the high school,” Bannon said.

Should the two public school districts serving eight South County towns join forces? The consultant who has crunched the numbers and weighed t…

Lenox middle and high school needs major building work. Will the state pitch in with funding?

As a panel continues to study merging high schools and school districts, members of the Southern Berkshire School Committee say they have not felt heard or respected. Enter a facilitator.

As South County school merger vote nears, a key question emerges: Who will pay what?

Should a new district charge all eight towns the same rate? For taxpayers, this could make or break a Monument Mountain and Mount Everett regional high schools merger.