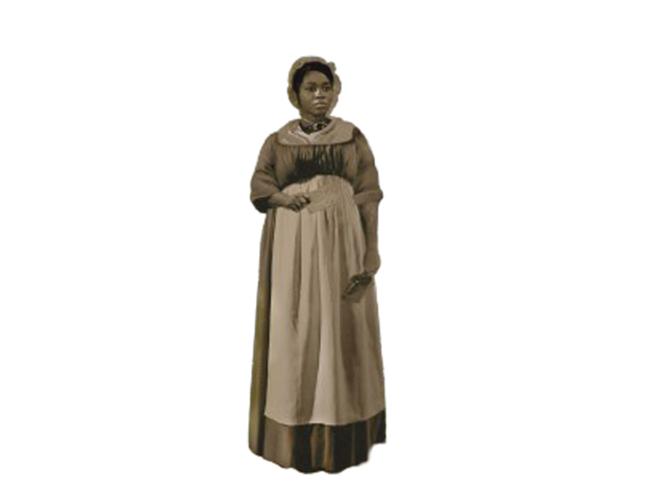 An artist rendering of the statue of Elizabeth “Mum Bett” Freeman that will be unveiled in Sheffield next summer. 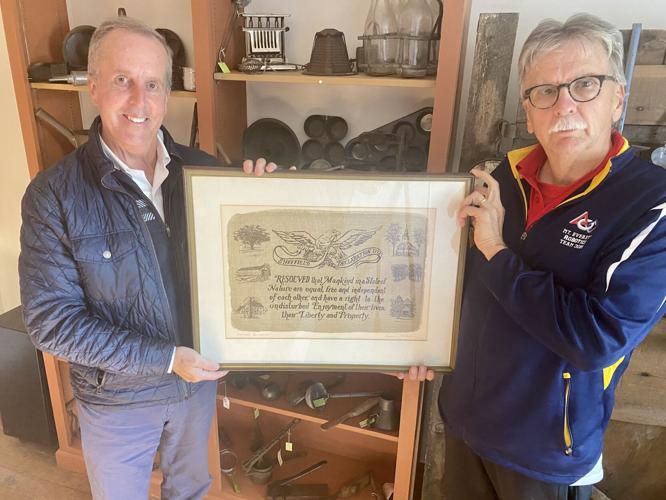 State Rep. William "Smitty" Pignatelli, left, and Paul O'Brien, president of the Sheffield Historical Society, hold a copy of the Sheffield Declaration (or Sheffield Resolves), the words of which inspired Elizabeth “Mum Bett” Freeman to seek her freedom.

An artist rendering of the statue of Elizabeth “Mum Bett” Freeman that will be unveiled in Sheffield next summer.

State Rep. William "Smitty" Pignatelli, left, and Paul O'Brien, president of the Sheffield Historical Society, hold a copy of the Sheffield Declaration (or Sheffield Resolves), the words of which inspired Elizabeth “Mum Bett” Freeman to seek her freedom.

SHEFFIELD — In the form of a 7 ½-feet-tall bronze statue in the village center, this town will stake its rightful claim to a freedom fighter who had a gruesome scar and the courage to make history.

Elizabeth “Mum Bett” Freeman could neither read nor write, but she could hear. She had heard the talk about equality and decided such ideals should apply to herself, a slave. She became the first enslaved African American to file and win a freedom suit in Massachusetts, in a case that eventually led to the ban of slavery in the commonwealth.

It happened here in Sheffield.

“It’s an untold part of American history that needs to be told,” said State Rep. William “Smitty” Pignatelli, D-Lenox, who has led the statue initiative, which has the full support of Sheffield officials. “I think it’s our obligation to share the story with the world.”

“There is so much of American history that we Americans don’t know,” said former Massachusetts Gov. Deval Patrick. “I’m delighted that my friends and neighbors in the Berkshires are supporting this project and lifting up the long struggle for freedom for all in Massachusetts.”

A fundraising initiative to raise $200,000 is launching this week to pay for the statue and an endowment for its upkeep. Plans call for an unveiling on Aug. 21, the 241th anniversary of Freeman’s emancipation from the man who claimed ownership of her, Col. John Ashley.

Born into slavery in Claverack, N.Y., around the year 1744, Mum Bett (as she was first known) was brought to Sheffield as a wedding gift to Ashley from Pieter Hogeboom. Ashley had married Hogeboom’s daughter, Hannah.

Mrs. Ashley was known to have been brutish to her slaves. A permanent scar on Mum Bett’s left forearm was caused, she said, when Ashley attempted to strike another young slave girl with a heated kitchen shovel. Mum Bett protected the girl by blocking the blow. For the rest of her time in slavery, Mum Bett refused to cover the wound, leaving it visible, a calling card to the cruelty of slavery.

Mum Bett could neither read nor write, but she certainly could hear. What she had allegedly heard were words being drawn up in the Ashley home, which was a hotbed of political rebellion. Specifically, Col. Ashley was among the men drawing up the so-called Sheffield Declaration (or “Sheffield Resolves”), a petition against British tyranny and a manifesto for individual rights, drafted in the upstairs study and published in 1773, predating the Declaration of Independence.

The final document stated the following: “That mankind in a state of nature are equal, free and independent of each other and have a right to the undisturbed enjoyment of their lives, their liberty and property.”

“She had heard these guys talking all that freedom talk, and she just said, ‘What about me? How do I fit in?’” said Paul O’Brien, president of the Sheffield Historical Society.

After similar language was included in the Massachusetts Constitution in 1780, Bett made the four-mile trek from what is known as Ashley House to the Sheffield village center. There, she sought out the lawyer Theodore Sedgwick, who had helped draft the Sheffield Declaration. He agreed to take the case. In open court in Great Barrington, he eventually won the freedom of Mum Bett and another enslaved person in the Ashley household named Brom.

This was almost 82 years before the Emancipation Proclamation, which freed slaves during the American Civil War. Mum Bett’s case launched so-called “freedom suits” throughout Massachusetts that would ultimately lead to a ban of slavery in the state.

Once she gained her freedom, Mum Bett changed her name to Elizabeth Freeman. Declining Ashley’s odd offer to stay in his household as a paid employee, she left Sheffield for Stockbridge and became a paid domestic worker for the Sedgwicks. Upon Freeman’s death in 1829, her body was given prominent placement within the famous “Sedgwick Pie,” a series of concentric circles of family headstones in Stockbridge Cemetery.

The statue that will be created for Sheffield will depict Freeman at the age of 37, which is believed to have been her age when she won her freedom.

The Berkshire Taconic Community Foundation is serving as the administrators of the fundraising campaign. The Sheffield Historical Society will serve as caretakers of the statue, which will be created by Brian Hanlon, the sculptor responsible for the 8-foot-tall statue of Susan B. Anthony that was unveiled in Adams in June.

The precise location for the statue will be determined soon. But it will have a prominent downtown setting, officials said. It will be set on a 3-inch-tall base on top of a foot-tall granite platform four feet in diameter. In her right hand, Freeman will be holding the judge’s ruling in her favor. Her left forearm will bear the scar from Mrs. Ashley.

In front of the statue will be two stone posts. The first will include words about Mum Bett’s life as a slave. The second will include words about Elizabeth Freeman, who would eventually earn enough money to buy a home of her own in Stockbridge. The wording will be overseen by Dr. Frances Jones-Sneed, professor emeritus of history and political science at the Massachusetts College of Liberal Arts.

“She was a pioneer,” said Pignatelli. “Before Rosa Parks, before Harriet Tubman, before Sojourner Truth, there was Mum Bett, and she was here, in Sheffield. I grew up in Lenox schools, and I never heard about her. I never heard about the Sheffield Declaration. People need to know about all of this.”

“A statue is an inanimate object, I get it,” said O’Brien, of the historical society, “but the symbolism for me is that Mum Bett will be back in the center of our town, letting the world know that she is a free woman.”

Our Opinion: Overdue and welcome recognition of Elizabeth Freeman's legacy

In 1744, a woman arrived in the Berkshires as a piece of property in the eyes of the law. She died a free woman after a struggle against the i…

An autograph book containing inscriptions from Susan B. Anthony, Mark Twain, Thomas Edison and many other American historical figures has been donated to the Susan B. Anthony Museum in Adams.