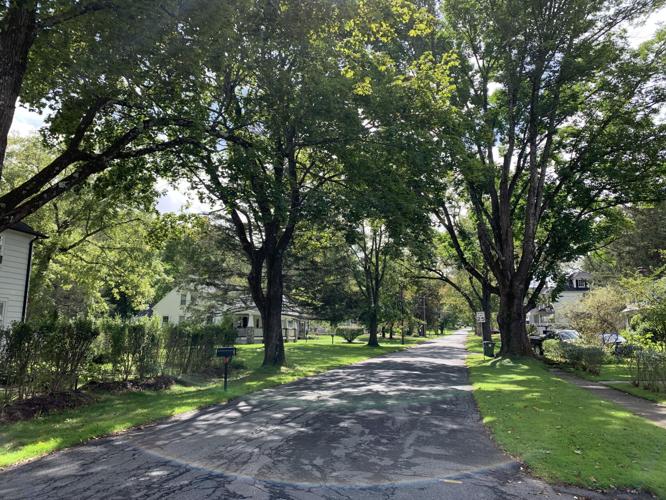 Gilmore Avenue in Great Barrington. Town officials are in early discussions about whether to set limits on short-term rentals throughout town.

GREAT BARRINGTON — Preliminary talks about restricting short-term rentals in an effort to address rental housing scarcity again are meeting resistance from homeowners and others who make a living through renting.

Members of the Planning Board and Select Board Housing Subcommittee caution that the concepts floated in an early draft of a short-term rental bylaw are an exploration in its infancy, of whether policies that include capping the numbers of days visitors can rent could somehow free up housing stock for local, long-term renters in a town where it has become almost impossible to find a long-term rental — affordable or not.

One subcommittee member says the rules in this draft might be too punitive and add too great a burden to the town, which then must police the situation. And several panel members said they aren’t yet sure if such a bylaw would do the trick.

Others are certain that it won’t. Those who rent their homes say the rules in this early draft do nothing to encourage them to switch from short-term to the financially riskier long-term renting. They also say such rules would harm them, and others — from handymen to ski resorts — who rely on visitors in a rural area where it is hard enough to carve out a living.

The debate already mirrors one that burned through Nantucket last year. And there is a reason for that. Planning Board and housing subcommittee member Pedro Pachano drafted the proposed bylaw based on one proposed in that island town — it failed to pass with voters in June — and circulated it Sept. 20, at an afternoon subcommittee meeting that was cut short because of a Zoom bombing incident. The meeting has not yet been rescheduled.

“People don’t like going to a hotel anymore. Families have gotten used to traveling in this manner. They come, they sleep, they leave. And I can sleep at night knowing that I’ll get a return on my investing.”

— Tony Segalla, who saved up so he could start buying homes right out of college, renovate and rent them to visitors in the short term

Pachano and the committee are acting on concerns that investors are scooping up homes, he said. And so the current draft would restrict rentals to 90 days a year for homeowners who are town residents, and 45 days a year for those who own rental properties but do not live in town. It calls for a seven-day minimum stay.

“There is a concern we’ve heard in the community about properties being snatched up and turned into business opportunities,” Pachano told The Eagle.

The bylaw also would require property owners to obtain a permit that must be renewed annually with fees — $150 for locals and $500 for out-of-towners — force them to submit a log of renters' names and other information to the town, and limit the number of people who stay in a rental.

Town officials over the past few years have tossed around the idea of a short-term rental bylaw to combat anecdotal reports of neighborhoods overrun with Airbnb-style renting that, some worry, affects community cohesion, removes housing stock for locals, inflates prices, and hurts area hotels and bed-and-breakfasts.

Also, the number of rental units has decreased by almost 200 since 2010, according to a 2020 Housing Needs Assessment study by the town in concert with the Berkshire Regional Planning Commission. The study identified 954 rental units in town.

Pachano pointed to the study, which shows that, while affordable housing is needed badly, many renters in Great Barrington can afford rentals here — they just can’t find any.

“My mother-in-law just moved to town, and we were looking for a rental for her, and we couldn’t find one,” Pachano said.

The rental market trends database AirDNA, as of Wednesday, Sept. 22, shows 187 current active rentals in the 01230 ZIP code — it primarily is Great Barrington — 91 percent of which are rentals of entire homes through Airbnb or Vrbo. A 2020 state Department of Revenue report said the town has 178 short-term rentals, including hotels, bed-and-breakfasts and other lodging, according to the housing study.

Leigh Davis, vice chair of the Select Board and a member of the subcommittee who also works for the affordable housing nonprofit Construct, said the panel wants community input so it can understand the range of circumstances facing property owners. She said that with 179 households on Construct's affordable housing waitlist, town officials are looking for a solution. She isn't sure if regulating rentals is the answer, but she wants to explore it. The main intent of a bylaw is to discourage investors, she said.

“And people who come to see this as an easy way to make a quick buck at the expense of the community,” Davis added.

“I’ve worked so freaking hard to be where I am now,” said Tony Segalla, who saved up so he could start buying homes right out of college, renovate and rent them to visitors in the short term. “To have the town try to shut us down to this extent — it would basically put us out of business.”

Segalla, 29, now owns several rental homes in town, as well as a long-term rental in nearby Connecticut. Segalla, a New Marlborough native who went to Monument Mountain Regional High School, also is a real estate agent. He said he wanted to return to town after college and raise a family here. He and his fiancee have a 2-year-old, and their business has allowed the family flexibility caring for the baby while still paying the bills.

Segalla says a bylaw like the one proposed would repel visitors and harm other businesses, including those he hires to care for the properties. It also risks cutting into the 6 percent tax revenue — on top of the state’s 5.7 percent — the town charges short-term renters.

“People don’t like going to a hotel anymore,” he added. “Families have gotten used to traveling in this manner. They come, they sleep, they leave. And I can sleep at night knowing that I’ll get a return on my investing.”

And he said that until state laws change to protect landlords from nonpaying “professional tenants” who sometimes can take two years to evict, the town won’t see people like him decide to switch business models.

Another longtime rental property owner, who did not want her name used in this story because she is emerging from a lengthy legal battle to evict a tenant who she says was hoarding and abusive toward her, told The Eagle she has two other homes happily rented with long-term leases in Great Barrington and receives a federal voucher for one. One is a two-bedroom for $1,175 a month, and the other is a three-bedroom for a $1,200 monthly payment. She said that landlord vulnerability is making property owners leery of long-term renting.

"There are good landlords out there that want to help," she said. "I have a viable apartment right now, but I'm afraid to rent it."

Jonathan Hankin, a Planning Board and subcommittee member who also owns rental properties, said that before the coronavirus pandemic, there was a notable uptick in homes sold to limited liability companies, and that he believes many of these are turned into short-term rentals. Data about the intentions of homebuyers, he acknowledges, also is scarce, while housing anecdotes are plenty.

Hankin said the regulations could be too burdensome to the town to police. He also wonders about privacy concerns for renters, and differing fees for resident or nonresident rental owners.

“To me, this seems cumbersome and fairly punitive,” he said. “If you could get this passed, I’m not sure it’s going to have the desired effect.”

Right now about 80 houses appear to be non-primary residences. But will those second homeowners want to become landlords? Or sell? Therein lies the mystery.

Supporters of a bylaw limiting short-term rentals to 90 days a year say the cons outweigh the pros, and he loss of some future tax revenue from regulations is worth it. Others say the town needs all the revenue it can get.