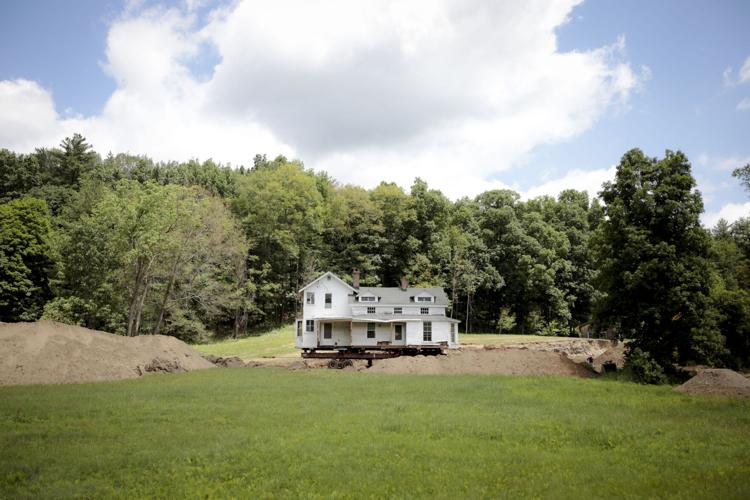 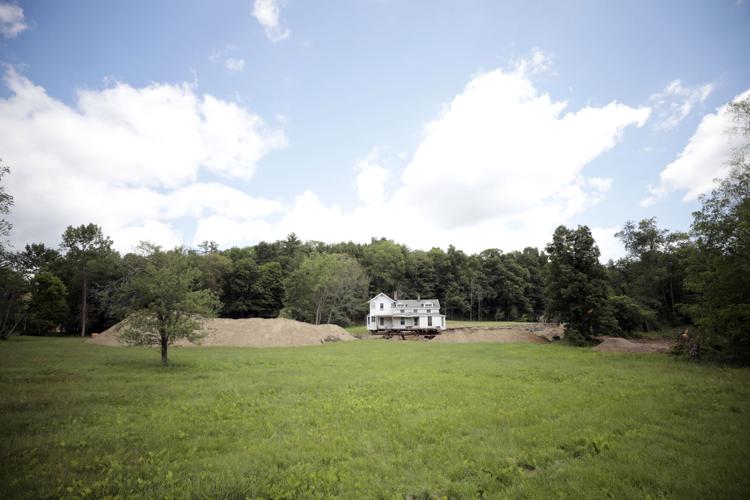 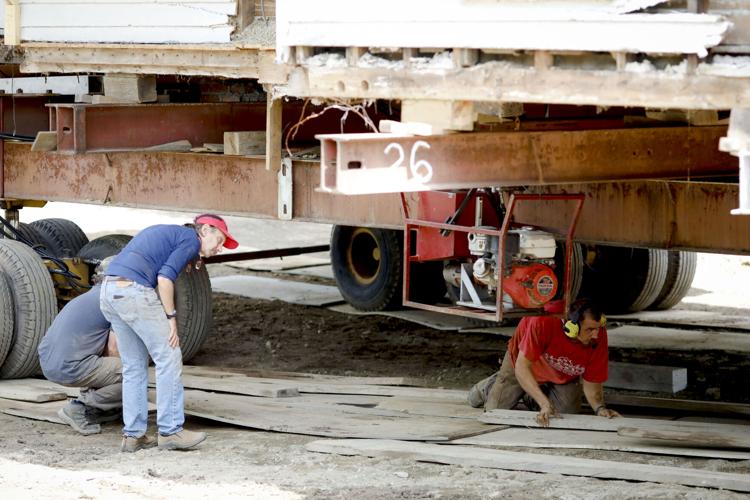 Crews lay boards to ensure the safe transport of the home of Black Revolutionary War patriot Agrippa Hull as they move it from its original foundation on Cherry Hill Road in Stockbridge to more secure ground, higher on the same property. Friday, June 24, 2022. 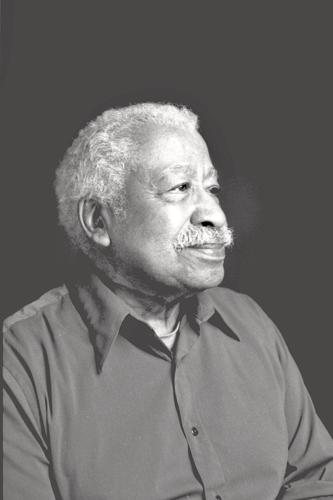 Wray Gunn is a direct descendent of Agrippa Hull. 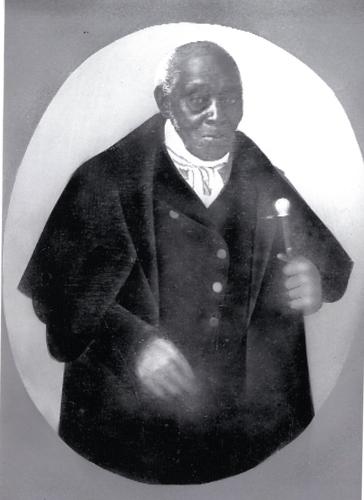 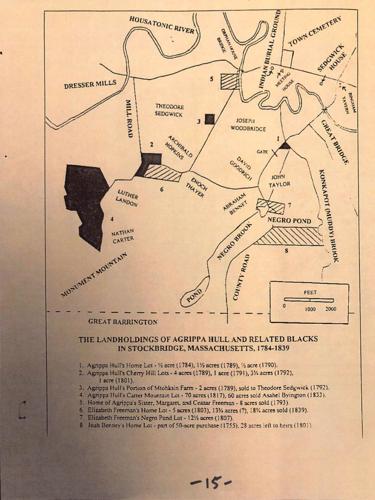 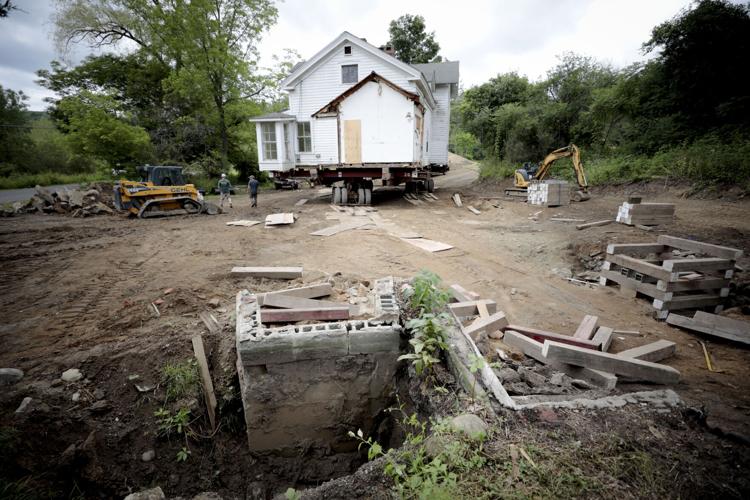 STOCKBRIDGE — A trailer hauling a jacked up historical Berkshires jewel is making its way up the hill.

Rolling inch-by-inch toward restoration and preservation.

Passerby and longtime next door neighbors stopped on Cherry Hill Road to watch, incredulous as the former home of Stockbridge legend, Agrippa Hull, headed to its new spot above where it has rested since it was built around 1830.

Wooden boards supporting the move over unstable earth dropped into what was once decaying foundation. Later in the day the house would go to its final destination — slowly.

“It’s an all-day affair,” said Peter Whitehead, a general contractor who is overseeing the entire project. "It's like watching grass grow."

Hull was a freeborn Black man who served in the Continental Army during the American Revolution and later worked for the prominent Sedgwick family here, saving up and amassing a large portion of land at a time when many whites couldn’t acquire land at all.

He is known for his battlefield bravery, service to military masterminds, charisma and integrity as a community member.

The history here tells so much of the larger American story.

It involves Elizabeth Freeman, noted for her legal fight for freedom, and who worked alongside Hull for the Sedgwick’s. Like Hull, Freeman also had substantial landholdings and was Hull's neighbor.

The Greek Revival-style home also was where Arlo Guthrie and Rick Robbins lived for a time when they so famously littered in 1965, and were so famously arrested for it. That story lives on in the song "Alice's Restaurant Massacree."

And for Helen McCormick, 80, who still lives across the street in the house she grew up in — and takes care of all by herself — it was the corner nook of the Hull home that is burned into her childhood memory, when the house was owned by the Swann family.

“They had a telephone in there, and being a little kid, you know, that was such a cozy little place,” she said, watching as workers toil around the house. “I would call my mother — 186M was our telephone number — and tell her, you know, I was still here and everything was OK and so forth. But that little corner has always stuck with me.”

The project to move and restore the home is a labor of love for Hans and Kate Morris, who live up the road and bought this property last year.

They aren’t new to historic restoration. With help, they researched Hull and the history of his landholdings. The Stockbridge Historic Preservation Committee in April granted their blessing to move forward with the project.

Hans Morris, a co-owner of The Eagle, told the committee that “a respectful restoration will be of significance to our community."

Moving the house would save it from a failing foundation. The house is near the road and at the bottom of the hill, making it vulnerable to “substantial water runoff."

Morris told The Eagle that Hull is not as well known beyond Stockbridge, and he’d like to help change that.

“I do think he deserves a bigger reputation,” Morris said, noting that there are still unanswered questions about Hull’s life here that would be fascinating to answer. He's also starting to make some connections with those who are interested in Hull and this history.

One of Hull’s descendants, Wray Gunn, of Sheffield, has also been digging for more information about Hull and the family tree. He didn’t know about Hull’s land holdings, and he’s excited to learn more and take a look at the house, though he was unable to witness its move Friday.

“That’s a lot of land,” Gunn said when told of Hull’s various acquisitions between 1784 and 1817 that amounted to 84 acres — all of it formerly belonging to the Stockbridge Indians, something that Hull had acknowledged, according to a paper about Hull by historian Lion G. Miles. Gunn, who is board chair of the new Du Bois Freedom Center in Great Barrington, last year traveled to Richmond, Va., when the state Legislature issued a resolution to honor “the life and legacy” of Hull.

In part, it says: "WHEREAS, Agrippa Hull fought bravely in many major battles of the Revolutionary War, including the Battle of Saratoga, the campaign of Valley Forge, the Battle of Monmouth Court House, and the siege of Charleston."

The past is present in oral history exhibit at Berkshire Museum

PITTSFIELD — When he was a boy, Dennis Powell would sit on the front steps on warm nights, when parents would come out onto their porches and carry on conversations along the street. He would …