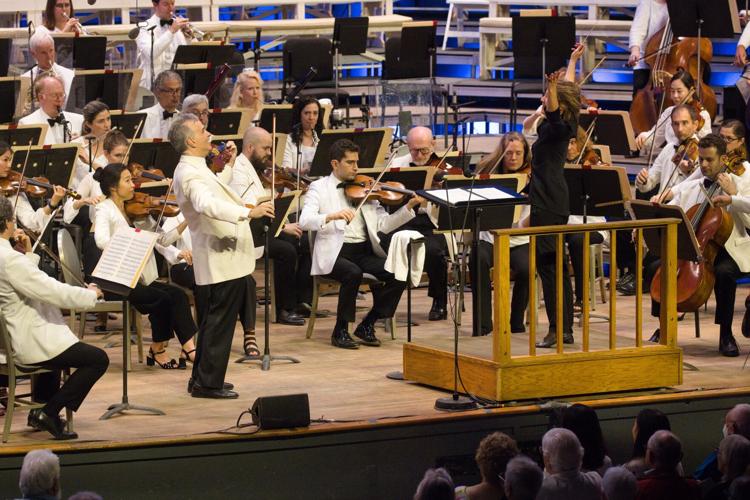 BSO Assistant Conductor Anna Rakitina leads violinist Gil Shaham and the Boston Symphony Orchestra in a program featuring Shostakovich, Dvořák and Borodin at Tanglewood in August. Attendance numbers were down slightly for the 2022 season compared to the last pre-COVID season of 2019. 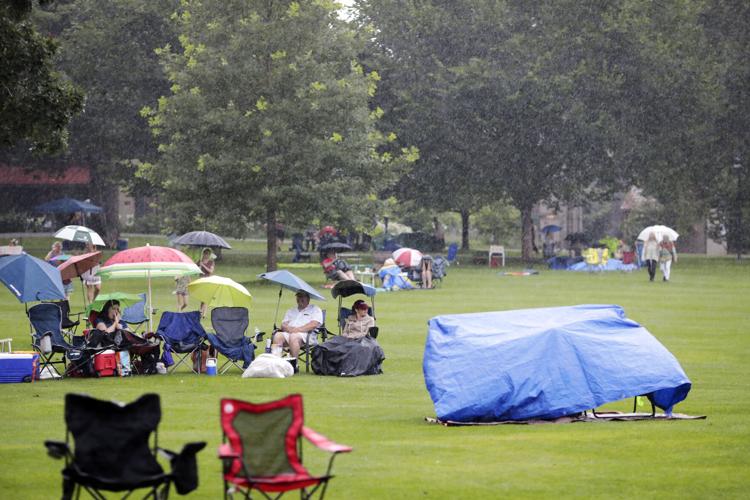 Some concertgoers tough it out in their seats as the rain falls hard around them, while others take cover under the Koussevitzky Music Shed during Tanglewood on Parade in Lenox in August. Attendance numbers were down slightly for the 2022 season at Tanglewood compared to the last pre-COVID season of 2019.

LENOX — The performing arts industry has been in a slump lately, but one of Berkshire County’s premier attractions has managed to mostly weather the storm.

The Boston Symphony Orchestra announced Tuesday that 289,810 listeners attended 204 performances this past season, Tanglewood’s first full slate of events since the pre-COVID season of 2019.

The season total represented a decline of 7 percent compared to 2019, when 311,596 patrons attended 248 performances. Because there were 44 fewer events this past summer than three years ago, individual concert attendance increased 12 percent from the summer of 2019, according to the BSO’s tally.

The drop-off in overall attendance, though relatively slight at Tanglewood, reflected a more severe, widespread trend in the performing arts, not only in the Berkshires but nationwide.

The Eagle took a look at the state of the performing arts industry earlier this month and found that the county’s biggest venues saw, on average, a 30 percent decline in ticket sales and attendance from 2019.

That report did not include Tanglewood’s attendance figures, since the season had not been completed.

The lowest number of listeners prior to 2019 was 318,439 in 2013, when James Taylor skipped his nearly annual Tanglewood shows during a prolonged break from touring in order to complete work on his studio album, “Before This World.”

The best-attended Tanglewood event in 2022 was the gala BSO celebration of composer/conductor John Williams’s 90th birthday year, drawing 16,887 listeners, according to a report prepared for The Eagle by the orchestra’s press office based on box office statistics. There’s an 18,000 cap on ticket sales by long-standing agreement with the towns of Lenox and Stockbridge.

That capacity limit followed a July 17, 2002, show by James Taylor, with 24,470 tickets were sold for his performance with John Williams and the Boston Pops. But unofficial estimates at the time, including one from Stockbridge Police Chief Richard “Rick” Wilcox, put the actual number at more than 25,000, including some hedge-hopping gate crashers.

Since that night, responding to concerns by Stockbridge and Lenox officials over the traffic-choked roads before and after the performance, Tanglewood has rigorously enforced an attendance cap of 18,000 for any single concert.

Here is the Boston Symphony’s list of the 10 best-attended concerts at Tanglewood this summer, based on box-office reports:

Taylor’s 2002 appearance broke the previous record of 23,039 in 1999 for Tanglewood on Parade, according to Eagle archives. In 1969, a performance by Jefferson Airplane, the Who and B.B. King drew more than 22,000 listeners, according to published reports at the time.

This summer’s salute to the famed film and concert-hall composer included a brief podium appearance by Williams leading the “Indiana Jones” march and a slew of celebrity guests, including live appearances by Taylor, superstar cellist Yo-Yo Ma, renowned violinist Itzhak Perlman, who had not performed at Tanglewood since 2011, and saxophonist Branford Marsalis.

Williams led the Boston Pops for 14 seasons starting in 1980, remains its conductor laureate and is also artist-in-residence at Tanglewood. He composed some of his most celebrated film scores while in the Berkshires for several weeks nearly every year since his appointment as Pops conductor.

Also on the top 10 list: The screening of George Lucas’s “Star Wars Episode V: The Empire Strikes Back,” with the full score performed live by the Boston Pops led by its conductor since 1995, Keith Lockhart.