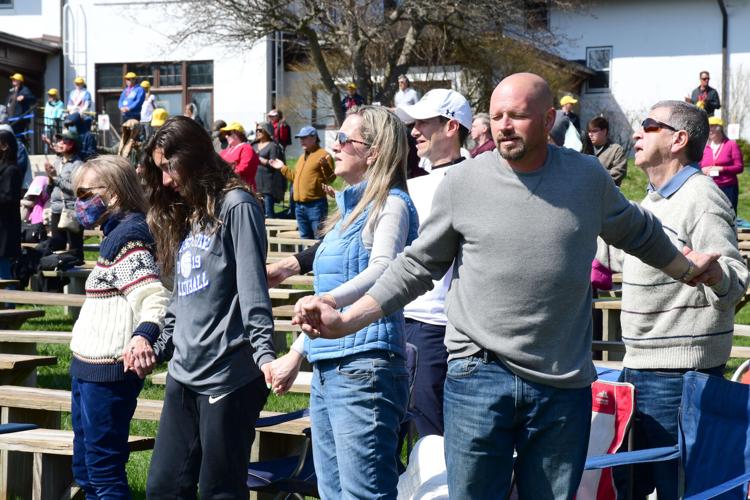 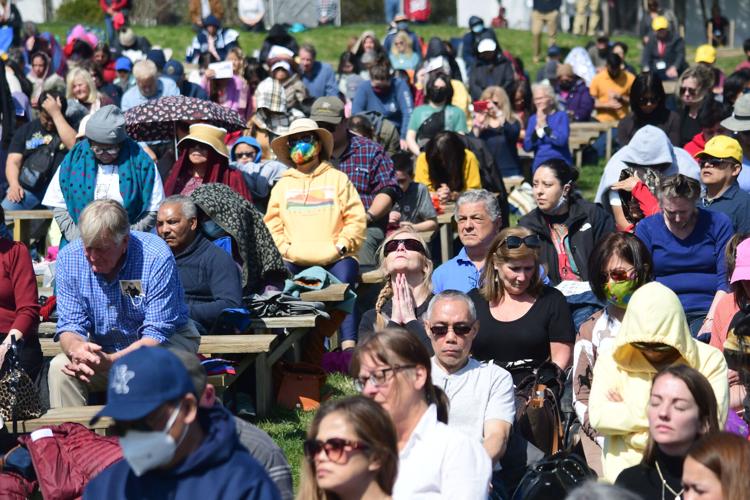 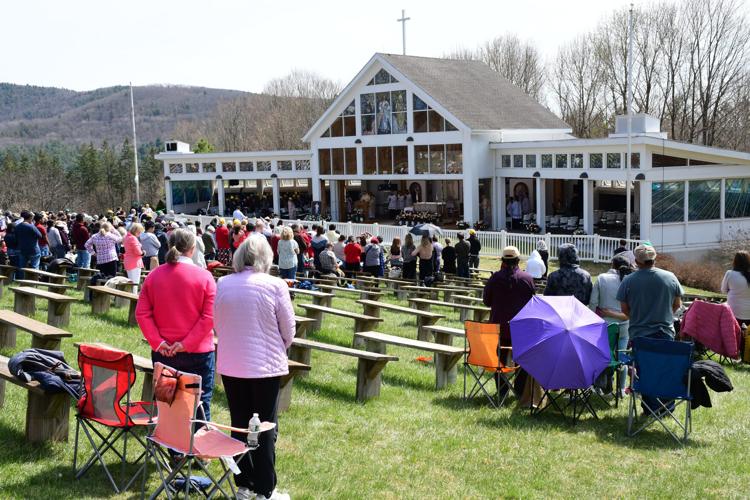 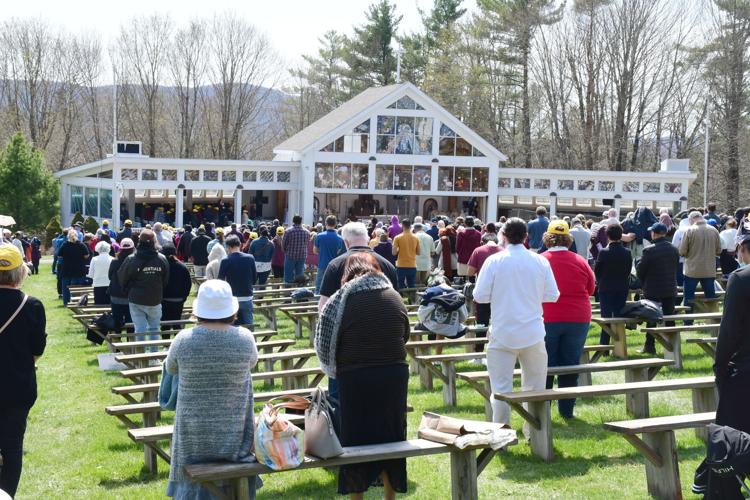 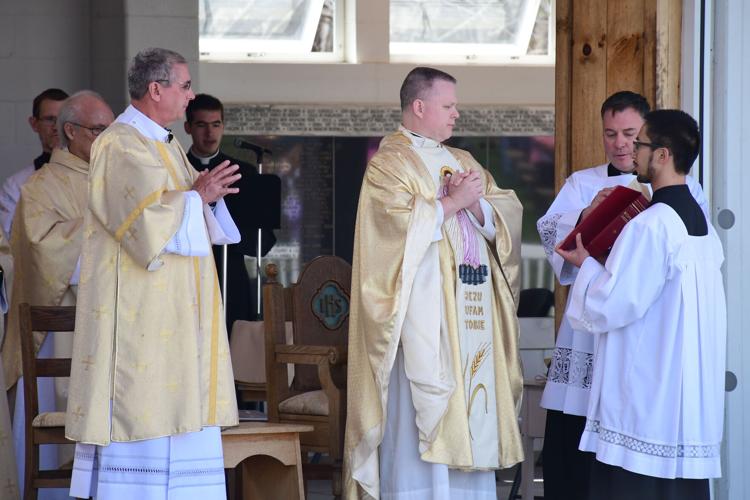 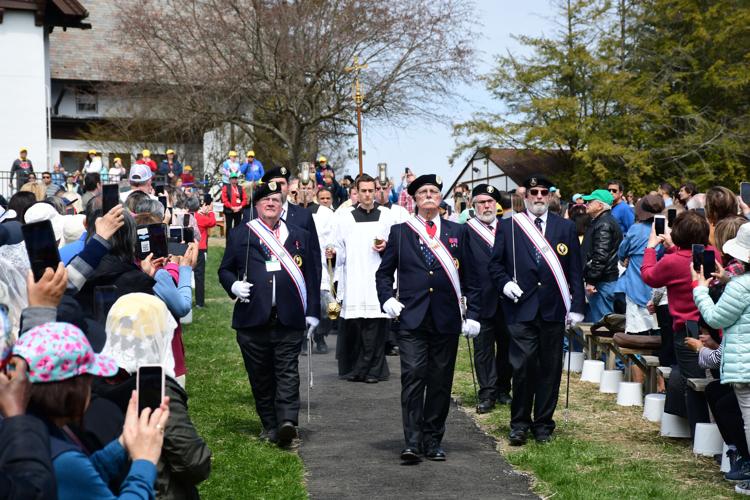 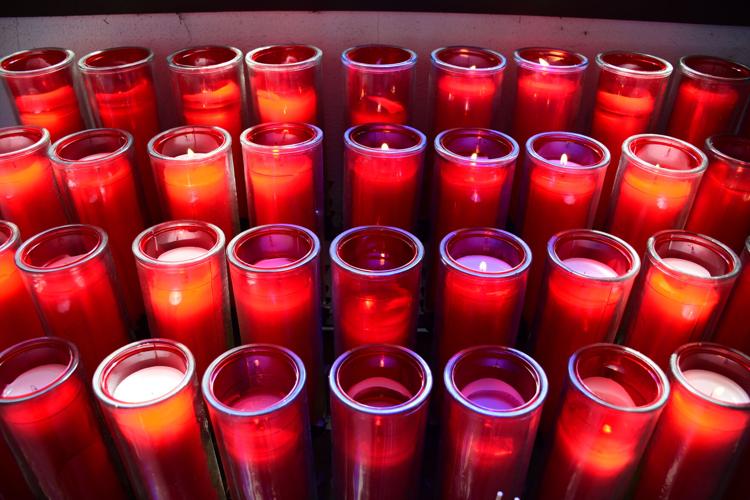 Votive candles in the Holy Family Candle Shrine at the National Shrine of the Divine Mercy in Stockbridge.

Votive candles in the Holy Family Candle Shrine at the National Shrine of the Divine Mercy in Stockbridge.

STOCKBRIDGE — Lynnette Pisano traveled more than 800 miles to the National Shrine of The Divine Mercy to keep a promise.

Because of the pandemic, the usual format for Divine Mercy weekend was streamlined, which included the Shrine church being closed. That didn't keep Pisano from experiencing the true meaning of being on the grounds of Eden Hill.

"I could never feel disappointed being here because Divine Mercy is everywhere. The shrine is a building, the Holy Spirit is everywhere," she said.

Pisano was among the 5,000 people who attended the Sunday session of the weekend-long event that typically draws 15,000 to 20,000 pilgrims each year.

Divine Mercy Sunday is an international Catholic feast day after Easter Sunday promoting Jesus' message that he's merciful to everyone and that people should trust in his mercy and lead a compassionate life.

A modified public celebration returned this year to the shrine after the pandemic forced cancellations in 2020 and 2021. Known for its weather extremes in past years, Mercy Sunday 2022 in Stockbridge was under fair skies, seasonable temperatures and a light breeze — a far cry from 2016's wind-swept cold and snow or the searing heat of a few years ago.

Since the coronavirus remains prevalent, attendance was limited to 5,000 people each day. Visitors were required to pre-register online; no walk-ins were allowed on either Saturday or Sunday.

All buildings, including the Shrine church and excluding the gift shop, were closed to the general public over the weekend, and the three scheduled liturgical services were held outside. Unlike previous years, the activities were not televised or livestreamed.

Missing from previous years were buses of faithful and a guest celebrant for the Sunday Mass. In fact, two masses were held on Sunday: One in the morning and one in the afternoon, to make the crowd more manageable, organizers said.

While the scaled-back celebration gave a more subdued feeling to the event, it was important to celebrate the 40th anniversary of the shrine's first public Mercy Sunday gathering, according to the Rev. Anthony Gramlich, MIC, rector of the National Shrine.

A look back at the National Shrine of the Divine Mercy

"We needed to show people we still care about them and wanted to meet their spiritual needs," he said. "There [is] still some fear about large events but we wanted to show we could do a big event without being a [super] spreader."

Coordinator of information for the weekend, Mary Kay Volpone said the people seemed upbeat about the celebration.

"I'm very impressed by the people, some who've come a great distance. Some of their stories are very moving," she said.

Several stories told of how praying for Divine Mercy had a profound impact on their lives.

Joe Bamond of Charleston, S.C., said his wife Denise, and their friends and family prayed a lot during his battle with a potentially deadly disease.

"I had a serious illness. I should be dead, they tell me. It was a miracle I'm alive," he said.

For Nancy Kerney, she has been praying for 50 years for spiritual healing and last year her prayer was answered.

"It simply was [that] God did it for me. Miraculous, remarkable," said the Clifton, N.J., woman.

George and Beatrice Guerra says Divine Mercy has been key to their 27 years of marriage. Their first date was at the National Shrine and they have been coming to Mercy Sunday every year since.

"Being here makes me relaxed, peaceful. It's a blessing to come here," said Beatrice.

While there was more elbow room than in previous years, George Guerra says he gets the same feeling he's gotten in previous Mercy Sunday celebrations.

"There is a feeling of faith and closeness; the Divine Mercy is the same," he said.

The message of Divine Mercy goes back more than 100 years.

In 1917, the Blessed Virgin Mary appeared to three children in Fatima, Portugal, emphasizing prayer, reparation and devotion to the Eucharist.

Divine Mercy also stems from a holy vision, that of Jesus appearing to Saint Faustina Kowalska in 1938, promoting a message to the Polish nun that Jesus is merciful and that people should trust in his mercy and lead a compassionate life.