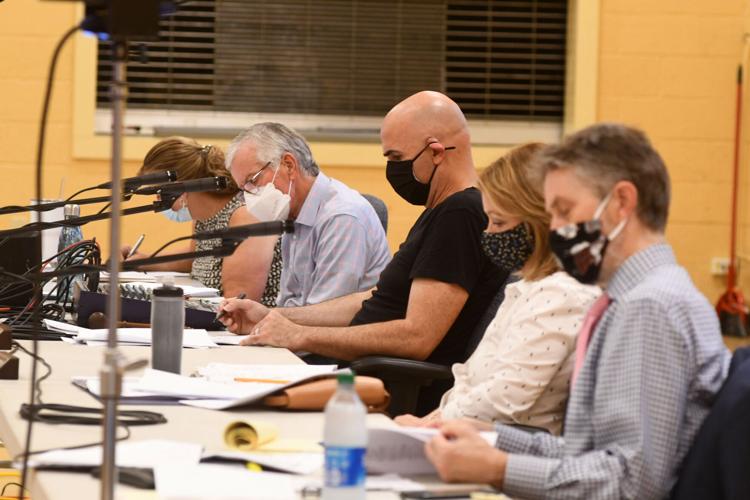 West Stockbridge Select Board members listen to testimony last year about a legal dispute between Truc Orient Express and The Foundry. From left, Roger Kavanagh, Chair Eric Shimelonis and Kathleen Keresey. The town's attorney is at the far right. 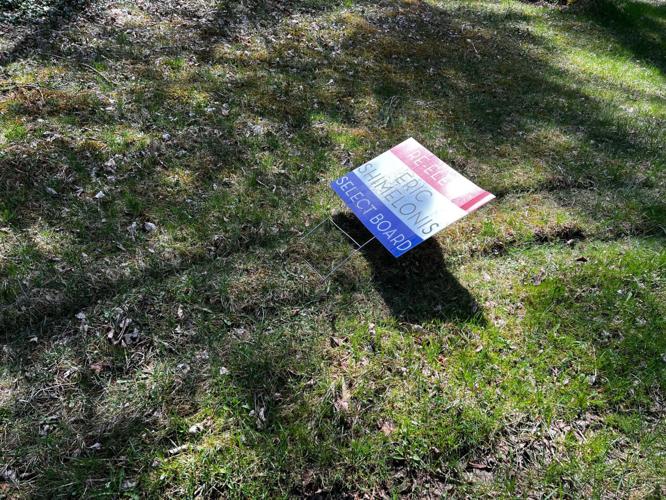 West Stockbridge Select Board Chair Eric Shimelonis posted this photo on Facebook on Monday after someone drove their vehicle into his yard and flattened his campaign sign. Shimelonis is running for a second term. Police are investigating.

WEST STOCKBRIDGE — Police are investigating after someone drove their vehicle onto the lawn of a Select Board member who is up for reelection, in an apparent attempt to flatten his campaign sign.

“There is a 6-year-old child at this house. This is untenable and downright dangerous.” Select Board Chair Eric Shimelonis, about the incident involving his yard and campaign sign.

Police also are trying to find out who stole three of the signs in two areas of town belonging to Eric Shimelonis, who is running for a second term.

West Stockbridge police have looked at the tracks and confirm that they are from a vehicle, though without crime analysis, they aren’t sure exactly what kind, said Officer Lucas Horn.

Horn said police are hoping someone’s surveillance camera might have captured the incident. Police also have increased patrols around town on the request of Chief Marc Portieri, Horn said. While the department is not “overly concerned” about mounting rancor in town, they’re watching for trouble.

“We’re staying vigilant,” Horn said. “It’s a political season, and sadly there’s always one or two individuals, like all across America, that have a more zealous approach.”

Shimelonis felt terrorized by the act, he wrote in a post on the West Stockbridge Community Board’s Facebook page. What began as negativity in town, he said, “is now manifesting as crime, and a real physical threat to me and my family.”

“There is a 6-year-old child at this house,” he added. “This is untenable and downright dangerous.”

He also alluded to the community board being a conduit for division during ongoing controversy. Another candidate for Select Board, Andy Potter, started the page last year.

Shimelonis declined to speak to The Eagle about the incident or what has sparked so much turmoil. He said he wished for a civil discourse.

“I believe in the democratic process and I want to run a clean campaign about the issues and my accomplishments in my first term, and it breaks my heart that this is the climate in the town right now,” he said.

The latest feuds stem from last year’s battle over noise and other issues between The Foundry performing arts venue and Truc Orient Express restaurant. What turned into a legal fight revealed the town’s past permitting and land-use mistakes. Shimelonis has been at the center of the controversy, given his role as Select Board chair, and as a musician who volunteered to help The Foundry with sound on at least one occasion when it first opened.

While the friction around last year’s problems has mostly died down, wounds occasionally reopen. The handling of a former board member’s question about The Foundry’s signage permit appears to have been the final straw in the announcement of the resignation of board member Roger Kavanagh last month. Kavanagh said conflict among residents had crystalized into tribalism.

“I’ve learned that the Town is slowly and not so quietly splitting into factions, one that wants ‘everything to be like it used to be’ and one that sees ‘transformation as the only answer for the future,’” he wrote in a statement.

In comments on Shimelonis’ post, Foundry owner Amy Brentano broke her silence on the community board, saying she had found the page a gutter of “nasty insinuations and provocations,” as well as inaccuracies. She called on Potter, the page administrator, to speak out against “the few who spread the seeds of false narrative” and intimidate others.

Potter responded, condemning the incident, and saying friends are more important than a town election.

Potter told The Eagle that, as administrator of the page, he doesn’t allow any degrading or hateful speech or bullying. Discussions were “heated on both sides” during last year’s feud, he added, but none rose to personal attacks in his view.

“[The page] is there for everyone,” he said.

In a completely separate post Monday on the community board, someone posed a question.

“Why is this town full of drama?”

One commenter said unwanted changes in town are to blame. Another said these changes are good. Yet another said it was time to put peace signs on lawns.

“There is some conscious healing that needs to take place,” she wrote.

Our Opinion: West Stockbridge must take this opportunity to reset and start some healing