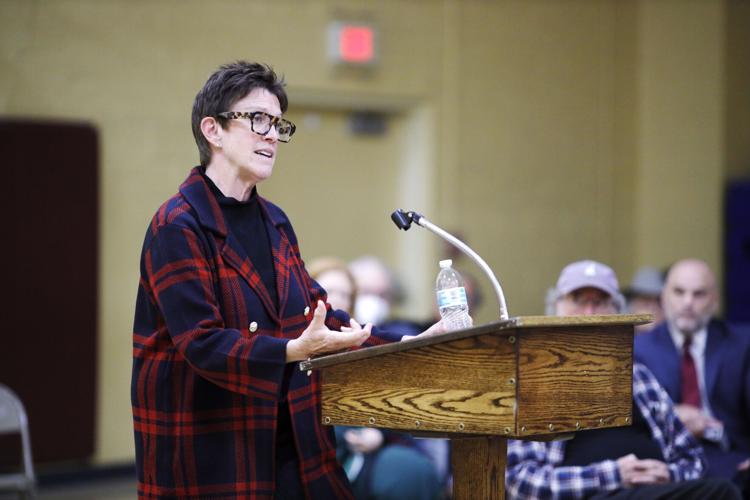 Amy Brentano, owner of The Foundry, states her case to the West Stockbridge Planning Board at its first hearing, Nov. 1, in a bid to renew the business’ special permit to operate as a performing arts venue. 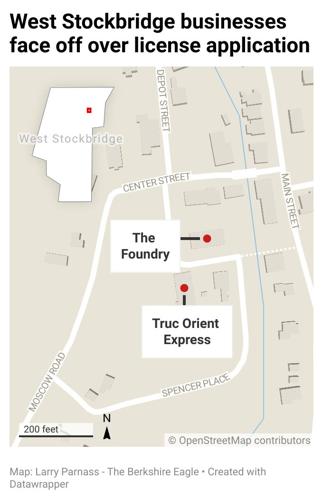 Amy Brentano, owner of The Foundry, states her case to the West Stockbridge Planning Board at its first hearing, Nov. 1, in a bid to renew the business’ special permit to operate as a performing arts venue.

UPDATE: West Stockbridge board issues entertainment permit to The Foundry, but with conditions

WEST STOCKBRIDGE — The future of The Foundry’s entertainment license will be taken up again this coming Monday, when the Planning Board gathers for the fourth time to consider an application that has divided the community.

The board’s chair, Dana Bixby, said Monday’s meeting may not be the last one. “I hope to set a plan to make a decision, but I don’t really know whether we’ll be able to do that,” she said by phone Tuesday, the day after her panel held a three-hour session about the application that focused mainly on sound levels from the venue.

The Foundry, a performing arts venue on Harris Street, has been trying to renew its license since Oct. 3. An abutter, Truc Nguyen, owner of Truc Orient Express, says that certain performances, especially those with amplified bass and drums, are excessively loud and cause her harm.

Residents have defended both businesses and called for a compromise.

Discussions at the third hearing Monday zeroed in on how to calculate ambient sound and how much noise is too much.

About 35 people attended, with 21 more present via Zoom. After three hours of, at times, heated discussions, including instances of hostility directed towards the Planning Board, the hearing was adjourned. It will resume at 7 p.m. Monday at Town Hall.

To back up her claims that she has been a good neighbor, Amy Brentano, The Foundry’s owner, brought sound acoustic engineer Ian Stewart to the hearing.

Steward explained that, on the morning of Nov. 13, he tested Harris Street’s ambient sound at The Foundry’s property line. He said he used a calculation that catches more low-rate frequencies such as bass. That Sunday morning, according to Stewart, ambient noise outside was 60 decibels.

Stewart then set out to calculate how music changed the sound level. For the test, he played the song “Pneuma” by the progressive metal band Tool, which Stewart said is not reflective of most performances at The Foundry. “When we did the test we played the music to a level that we established was ... as loud as it gets inside,” he said.

Inside The Foundry, sound levels ranged between 90 and 102 decibels during the test. Sound levels outside peaked at 73 decibels, he said, or 13 decibels over the ambient level he had measured on the street.

“It’s well within a lot of other [towns’ regulations]. If you look at Great Barrington, for example. Their sound ordinance stipulates a maximum increase of 20 decibels,” Stewart told the board.

Several board members disputed Stewart’s methodology. Bixby, the chair, and Gunnar Gudmundson said Stewart should have eliminated spikes in sound so as not to create an artificially high reading of the ambient outdoor noise.

Other board members argued the measurements should be done over a longer period to get a more accurate reading.

Asked later by The Eagle, Bixby said a better measurement of sound levels could be useful. “I would hope to get better measurements of ambient sound. I’m not sure it’s essential for the decision, but it might be helpful.”

Nguyen questioned whether the measurements cited were meaningful — and whether they reflect what she hears at her house and restaurant. “If you know where we are and where our property is, it sinks down,” she said of the terrain. “People at TurnPark [Art Space] say they don’t hear anything. They’re above what’s happening in this little fishbowl.”

The art space is located at 2 Moscow Road, about 400 feet from The Foundry.

Bixby said Tuesday she is committed to having the board render a fair decision. “We really seek equity and balance for special permit applicants and for abutters. We are determined and are working to achieve that,” she said.

At a second hearing on The Foundry's request for a special permit, residents asked the board to find a compromise with an abutter and for the town to provide better enforcement of any conditions imposed on the venue.

Members of the Planning Board have heard emotional appeals, from Amy Brentano and her supporters, in favor of granting a permit for live music. They’ve heard equally emotional accounts of the harm that loud, amplified music has had on neighbor Truc Nguyen and her business, Truc’s Orient Express. A fifth hearing comes Monday.