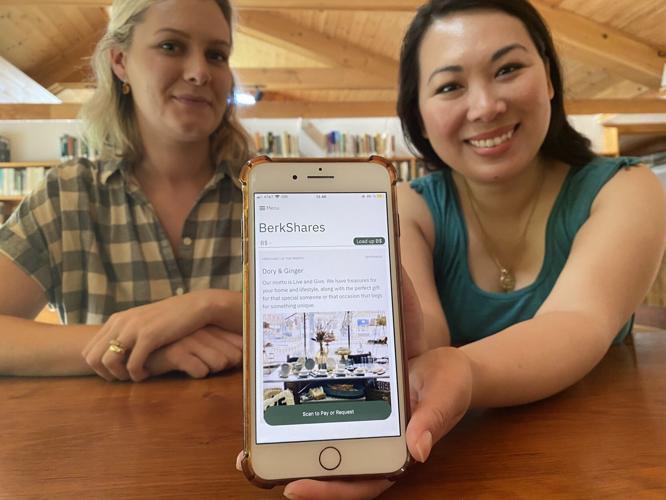 Rachel Moriarty, left, and Fennie Wang offer a sneak preview of new BerkShares local digital currency, which will be available through an app by December. 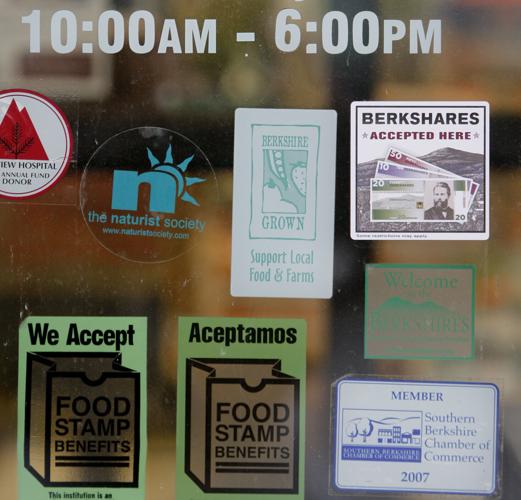 A sticker on the entrance door of the Berkshire Food Co-op in Great Barrington lets customers know that the store accepts BerkShares. The digital platform will give local merchants an advantage of not having to pay transaction costs associated with credit cards. 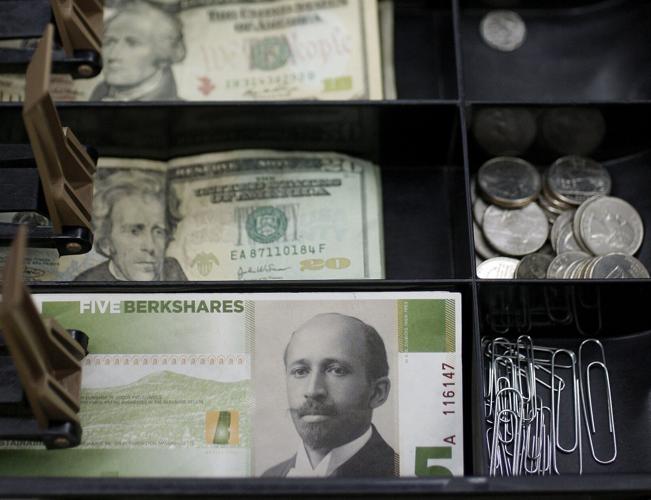 EGREMONT — As cash continues to lose its kingship in an increasingly digital age, the nonprofit group behind the local currency known as BerkShares has announced plans for a payment platform using a mobile app.

Soon, anyone with a bank account and a smartphone or tablet will be able to download the app and obtain BerkShares to spend locally.

“We’ve seen the need to take BerkShares digital for the past few years, and particularly with COVID, when we saw a huge drop-off in cash transactions, that really encouraged us to take it more seriously,” said Rachel Moriarty, program administrator for BerkShares Inc.

The BerkShares app, which will operate much like PayPal’s popular Venmo mobile cashless payment service, is in its testing phase. Moriarty said it will be available as a free download for iOS and Android users by December, in time for the holidays.

BerkShares first was launched by the Egremont-based Schumacher Center for a New Economics in 2006 to foster regional self-reliance, and a greater kinship between residents and local businesses. About 400 businesses in the region accept BerkShares, and about 140,000 BerkShares are in circulation, Moriarty said.

Those physical banknotes, which bear portraits of local luminaries like Herman Melville, Robyn Van En, Norman Rockwell and W.E.B. Du Bois, can be obtained in exchange for federal currency at Pittsfield Cooperative Bank, and participating branches of Lee Bank and Salisbury Bank.

But, with digital BerkShares, a bank visit won’t be necessary.

Users of digital BerkShares will download the BerkShares app to their smartphones or tablets and then digitally connect the app to their bank account. It could be Salisbury Bank, Lee Bank or any bank, whether it’s affiliated with BerkShares or not.

When users obtain the digital BerkShares, the money, in U.S. dollars, will be withdrawn from their personal bank account and deposited into one of two holding accounts (Salisbury Bank or Lee Bank), at which point digital BerkShares will be minted to the users’ app account and made available for use. Meanwhile, the U.S. dollar reserves will sit on deposit at the community banks.

Currently, the physical BerkShares program requires merchants to have an account at the participating banks if they want to cash out.

“This change allows for businesses that hold their accounts at other local banks to now participate,” Moriarty said. “And so that opens up a huge amount of possibilities for us because businesses in North County, where, say, bank branches weren’t present prior to this, can participate.”

Payment can proceed in one of two ways. Participating merchants can post a static QR code and have the customer scan the code and enter in the amount due, or the merchant can produce a unique QR code for the transaction and have the customer scan it to complete the transaction. Customers can show their device to the merchant to confirm that payment was completed.

The digital platform will give local merchants an advantage of not having to pay transaction costs associated with credit cards, said Fennie Wang, the founder of Humanity Cash, a technology company that is building digital BerkShares.

Unlike physical BerkShares, which are obtained in exchange for U.S. dollars at a rate of 95 cents per BerkShare, digital BerkShares can be obtained and exchanged back to federal currency at a one-to-one cost ratio using the app.

Merchants will not incur any fees on customer purchases in BerkShares, nor will they pay or incur fees when they recirculate their BerkShares. But, if a business wants to cash out to U.S. dollars, it will pay a 1.5 percent redemption fee. Moriarty notes that the fee is competitive with credit card processing fees, which are in the range of 3 to 5 percent, as well as Venmo, which charges a 1.9 percent transaction fee plus 10 cents.

The app will not be just a payment instrument, Wang said. It will include a local news feed, and updated suggestions on events and deals from participating BerkShares businesses and organizations.

The digital platform will enable BerkShares Inc. to address two matters it considers crucial to its goal in administering a sustainable local currency, Moriarty said.

For one, the digital platform will make it far simpler to obtain BerkShares.

Secondly, it will enable BerkShares Inc. to trace the flow of its digital currency and thereby determine the extent to which it circulates through the local economy — from, say, retail shopper to merchant, merchant to grocery store, grocery store to farmer, and so on.

In an era of globalization, BerkShare Inc.’s goal is to educate people in the importance of keeping money flowing through the local economy.

“It brings a human face to money, to economy, to community,” Moriarty said. “We want people to think of themselves as empowered, conscious consumers — and not just spending money because that’s how the world works.”

The nonprofit that runs BerkShares, the county's local currency, has developed a digital app that reflects the organization's values, is backed by local banks and keeps money circulating throughout the community.