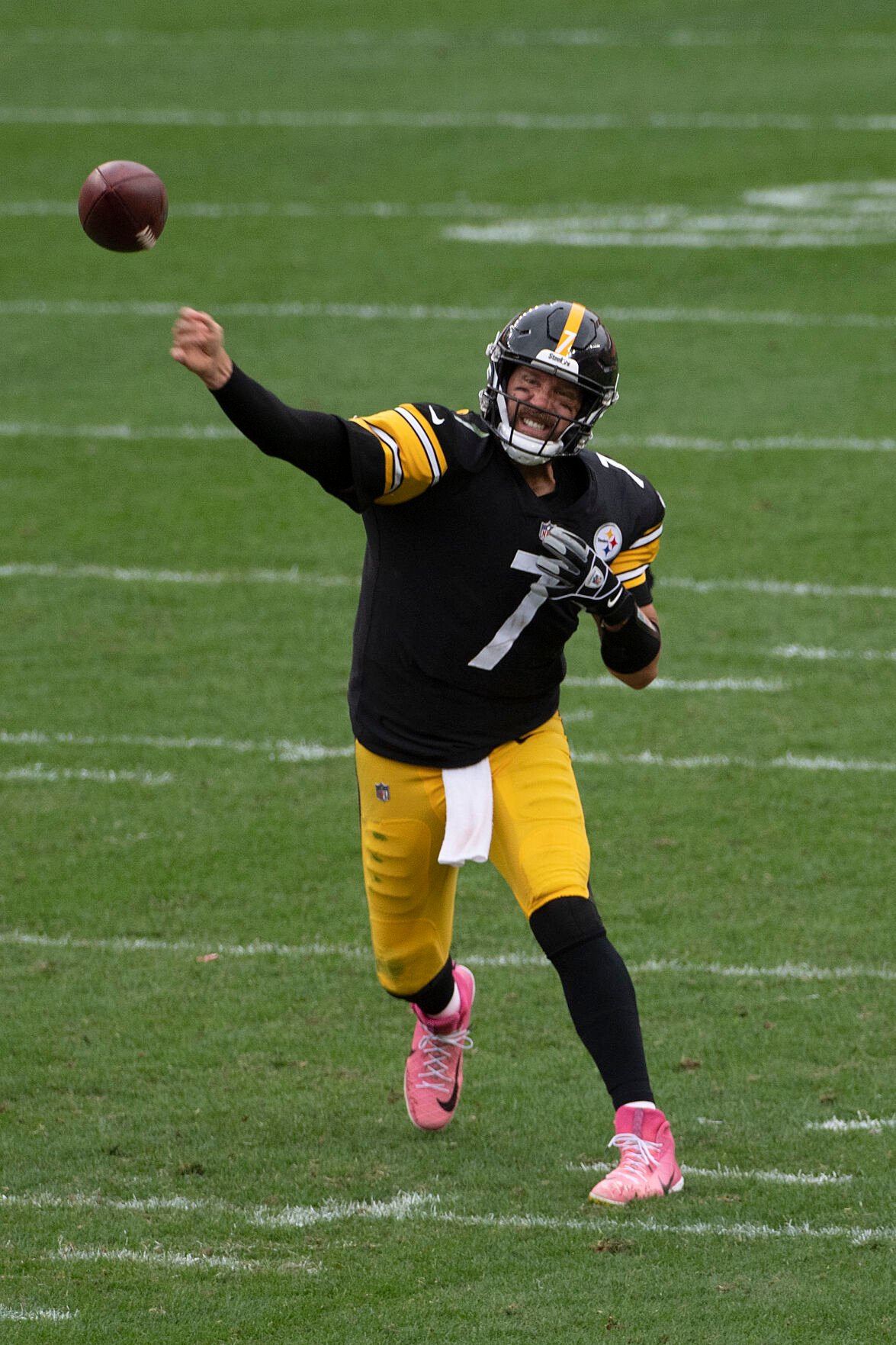 Pittsburgh Steelers quarterback Ben Roethlisberger in action during a game against the Philadelphia Eagles, Sunday. Pittsburgh stayed unbeaten with a 38-29 win. 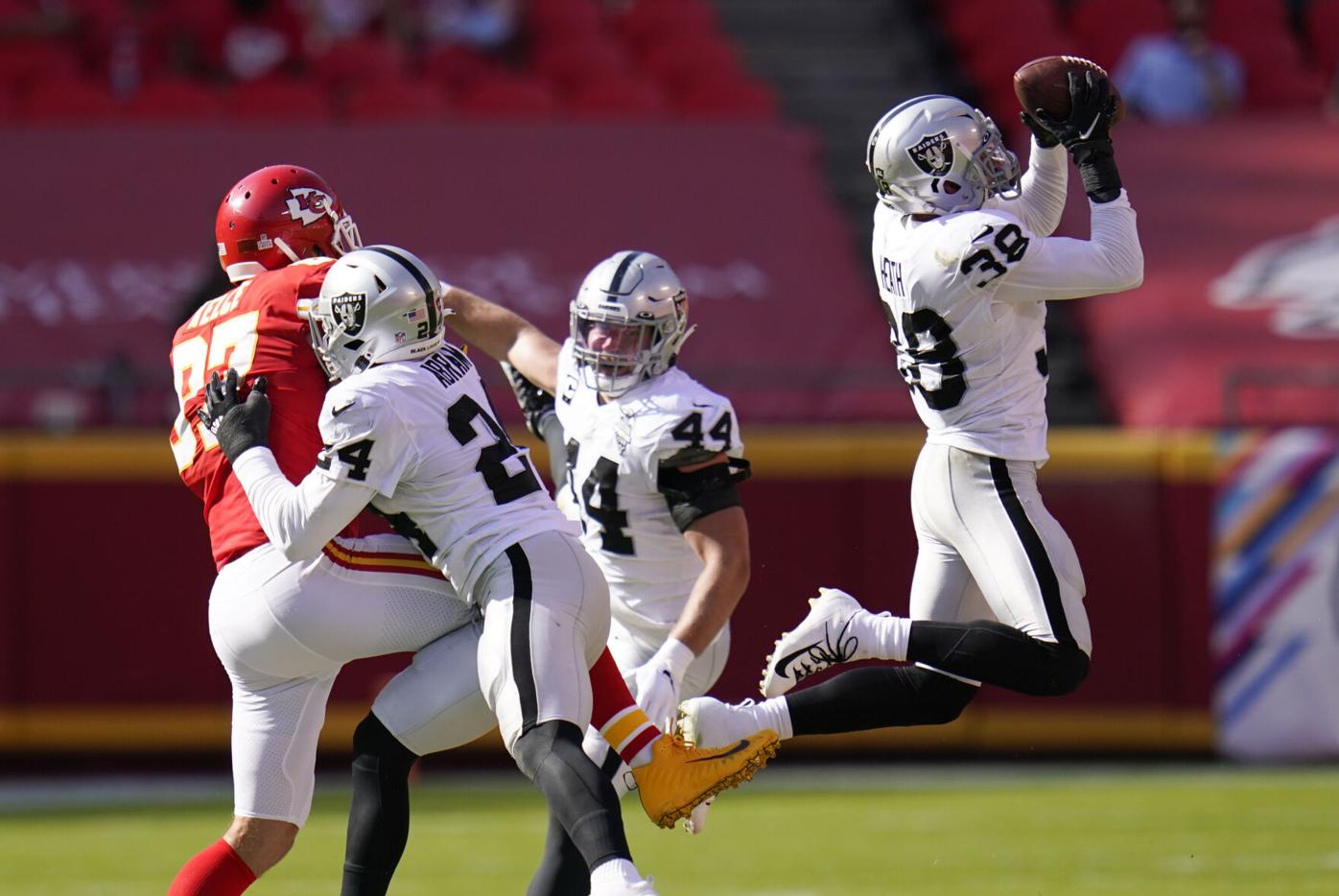 Pittsburgh Steelers quarterback Ben Roethlisberger in action during a game against the Philadelphia Eagles, Sunday. Pittsburgh stayed unbeaten with a 38-29 win.

KANSAS CITY, Mo. — Derek Carr threw for 347 yards and three touchdowns, outplaying Super Bowl MVP Patrick Mahomes along the way, and the Las Vegas Raiders nearly shut out the potent Kansas City offense in the second half to rally for a 40-32 victory Sunday that ended the Chiefs’ franchise-record 13-game winning streak.

Josh Jacobs scored the go-ahead touchdown in the fourth quarter, Daniel Carlson added a field goal a few minutes later, and Mahomes was intercepted on fourth down to set up another touchdown by Jacobs that make it 40-24 with 5:26 left.

Mahomes led the Chiefs quickly downfield, hitting Travis Kelce for a touchdown and Darrel Williams for the 2-point try to make it a one-possession game.

But after the Raiders (3-2) recovered the squib quick, Jacobs rumbled for a first down as the Chiefs (4-1) used up their timeouts, and Carr sneaked for a first down on fourth-and-1 near midfield with 2 minutes left to allow Las Vegas to end its five-game skid against Kansas City.

The Chiefs had won seven in a row over their longtime rival at Arrowhead Stadium, where Carr had been especially bad in losing each of his six starts. But he was simply spectacular with a relatively quiet 17,000 fans in the building, helping to guide the Raiders to their first win in Kansas City since Oct. 28, 2012.

Mahomes spent the entire game trying to escape the Las Vegas pass rush, which manhandled the Chiefs offensive line, and finished with 340 yards passing and two touchdowns along with an interception. Kelce had 108 yards receiving.

RAMS 30, WASHINGTON 10LANDOVER, Md. — Jared Goff threw for 309 yards and two touchdowns and ran for another, and Los Angeles improved to 4-1 by beating Washington in Alex Smith’s return almost two years since a gruesome injury put his career in jeopardy.

Smith played his first NFL game 693 days since breaking his right tibia and fibula, entering when new Washington starting quarterback Kyle Allen injured his left arm. He was 9 of 17 for 37 yards on the same field he was carted off of on Nov. 18, 2018, before undergoing 17 surgeries to repair the injury.

The Rams are thrilled with such a strong start in a tough NFC West after missing the playoffs last season. They’ve swept the NFC East and are only a three-point loss on a questionable pass interference call away from being undefeated.

Led by Aaron Donald’s four sacks and blanket coverage, the Rams clamped down on defense and ran it up in the rain on offense.

Claypool, a second-round pick from Notre Dame, raced down the slot, hauled in a dart from Ben Roethlisberger and went the rest of the 35 yards to the end zone as the Steelers improved to 4-0 for the first time since 1979.

A native of Abbottsford, British Columbia, Canada, Claypool finished with seven receptions for 110 yards and three scores and added a 2-yard touchdown run on a jet sweep. Claypool became the first Canadian-born NFL player with three receiving TDs in a game since Joe Rooney did it for the Duluth Eskimos on Oct. 23, 1927.

Roethlisberger completed 27 of 34 passes for 239 yards and the three scores to Claypool. James Conner ran for 44 yards and a touchdown as the Steelers showed little rust despite having an unexpected bye week last Sunday after the NFL scheduled their trip to Tennessee while the Titans dealt with a COVID-19 outbreak.

Carson Wentz threw for 258 yards and two touchdowns but was also picked off twice, both times by Steelers cornerback Steven Nelson.

TEXANS 30, JAGUARS 14HOUSTON — Deshaun Watson threw for a season-high 359 yards and three touchdowns and Houston got its first win of the season with a victory over Jacksonville in the wake of coach Bill O’Brien’s firing.

O’Brien, who was also the general manager, was let go on Monday after the Texans fell to 0-4 last weekend. Romeo Crennel was named interim coach and at 73 he become the oldest coach in NFL history, passing Hall of Famer George Halas, who was 72 in his last game with the Bears in 1967.

The Texans led 23-14 after a field goal with about 7½ minutes to go and got the ball back when Jacob Martin sacked Gardner Minshew and forced a fumble. It was recovered by Whitney Mercilus, who fumbled on the return, but the Texans pounced on the ball to keep it.

Houston (1-4) pushed the lead to 30-14 when Watson found Brandin Cooks on a 28-yard touchdown pass on fourth-and-4 with about five minutes remaining.

The Jaguars (1-4), who were missing three defensive starters because of injuries, have dropped four in a row since their season-opening win against Indianapolis. Minshew threw for 301 yards and two touchdowns in the loss.

PANTHERS 23, FALCONS 16ATLANTA — Teddy Bridgewater threw for 313 yards and two touchdowns, Juston Burris made a huge interception in the end zone and Carolina held on for a victory over winless Atlanta, perhaps finishing off the coaching career of Atlanta’s Dan Quinn.

The Falcons dropped to 0-5 for the first time since 1997, turning up the heat even more on their embattled coach.

Carolina (3-2) built a 20-7 halftime lead behind Bridgewater’s touchdown passes of 57 yards to D.J. Moore and 3 yards to Mike Davis, drawing boos that could be heard even from a sparse, socially distanced crowd of 6,656 at 75,000-seat Mercedes-Benz Stadium.

Atlanta, which this season became the first team in NFL history to squander fourth-quarter leads of at least 15 points in consecutive games, tried to turn the script in the second half. Younghoe Koo booted two field goals and the Falcons drove into position for a tying score in the fourth quarter.

Baltimore stout defensive performance was punctuated by Patrick Queen’s 52-yard fumble return in the fourth quarter. It was the first NFL touchdown for Queen, who played with Burrow last year for national champion LSU.

Ravens quarterback Lamar Jackson wasn’t particularly sharp, but it didn’t really matter. Jackson, the 2019 NFL MVP, went 19 for 37 for 180 yards and two touchdowns with an interception.

CARDINALS 30, JETS 10EAST RUTHERFORD, N.J. — Arizona came to MetLife Stadium and like every other team this season found a cure-all for its woes with a game against a winless team from New York’s rotten football apple.

Kyler Murray ran for a touchdown and threw another to DeAndre Hopkins as the Cardinals snapped a two-game losing streak with a victory over the Jets, further putting coach Adam Gase’s future in jeopardy after an 0-5 start.

Murray had a 2-yard TD run and hit Hopkins on a 37-yard strike on a day the Cardinals (3-2) had 496 yards in total offense. Chase Edmonds scored on 29-yard run, Kenyan Drake tallied from a yard out and Zane Gonzalez kicked a 47-yard field goal. Arizona scored touchdowns on drives of 96, 89, 75 and 70 yards.

Playing with Joe Flacco in place of injured quarterback Sam Darnold and with running back Le’Veon Bell in the lineup for the first time since opening day, the Jets stayed close into the second half. They drew within 17-10 on an 11-yard pass from Flacco to Jamison Crowder, who had eight catches for 116 yards.