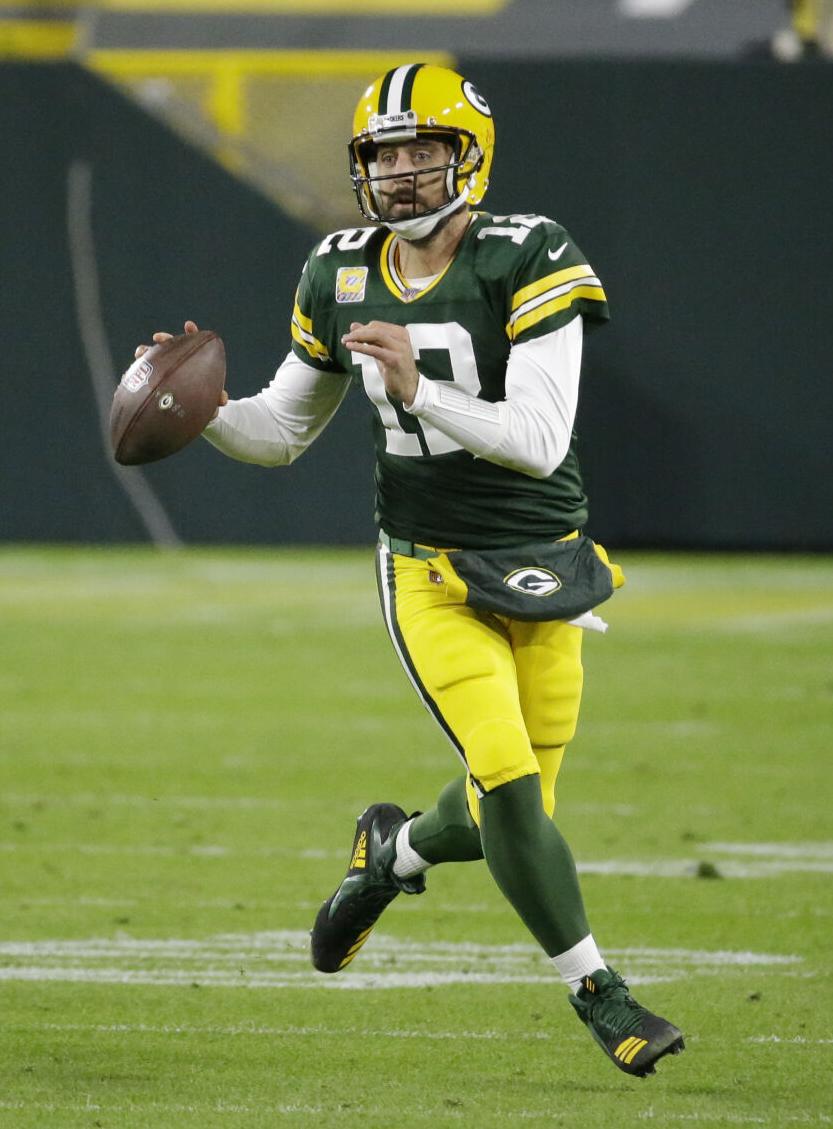 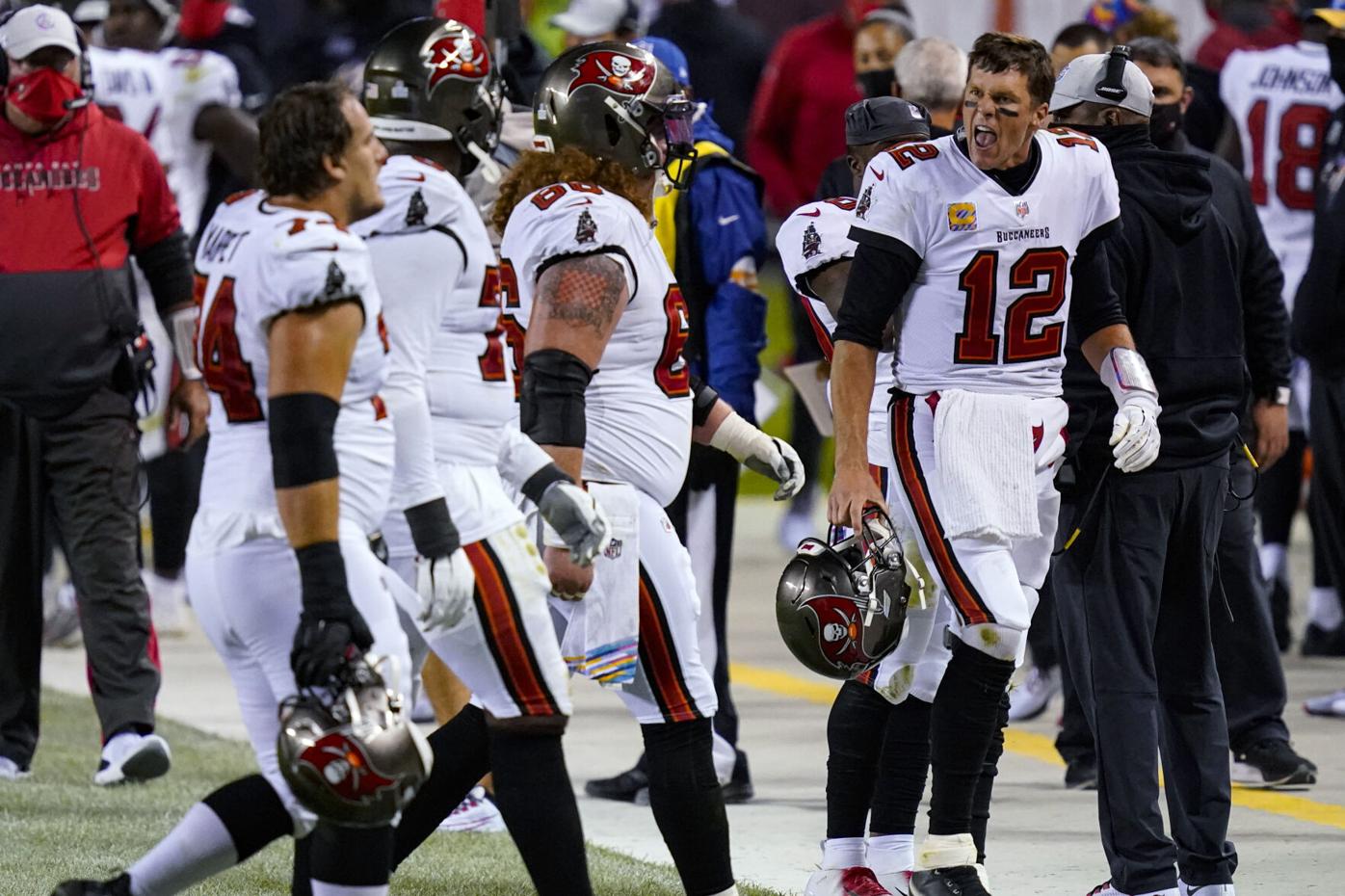 Tampa Bay Buccaneers quarterback Tom Brady yells at members of his offensive line as they walk off the field during during a game against the Chicago Bears earlier this month.

Tampa Bay Buccaneers quarterback Tom Brady yells at members of his offensive line as they walk off the field during during a game against the Chicago Bears earlier this month.

Hey old-timer, what are you still doing on an NFL field?

Guaranteed no one is asking that question to the quarterbacks in the bays: 43-year-old Tom Brady in Tampa and 36-year-old Aaron Rodgers in Green Bay. The two future residents of Canton, Ohio — at least their busts in the Pro Football Hall of Fame, that is — spice up the Packers-Buccaneers game Sunday in Tampa.

And who says these quarterbacks are old? Certainly not Buccaneers coach Bruce Arians, who has worked with some of the best — young or old — throughout the decades.

Rodgers, whose Packers (4-0) have been the most fundamentally sound team in the NFL so far on both sides of the ball, is 1-1 against Brady. He’s a big fan of Brady’s.

“He’s kind of always been ahead of the field with his footwork and just his dedication to what he’s doing,” Rodgers says. “He really cares about it obviously. He cares about taking care of himself and trying to get to 45, it looks like. And he’s gonna get there.”

The Packers have won their past nine regular-season games. They are the first team in NFL history to score at least 150 points and commit no turnovers through the first four games of a season.

Tampa (3-2) is ranked No. 1 against the run, No. 2 overall on defense. The unit has held opponents to less than 50 yards rushing the past three weeks. The 2016 Packers were the last team to do that in four consecutive games.

Cleveland (4-1) at Pittsburgh (4-0)Here’s a rarity: A matchup of these AFC North archrivals that draws headlines. It’s the first time they both are at least three games over .500 when they meet since 1994.

The Browns have won four straight and are 4-1 for the first time since that year, but have lost 16 straight games at Heinz Field to the Steelers.

“It is a great test for us,” says Browns quarterback Baker Mayfield, who has been nursing sore ribs. “Another great defense. They bring a physical challenge. They bring the muddied pockets. They will hit you. They try to impose their will.

“That is what our division is all about. We have to play that ball, match that energy and exceed it.”

—Los Angeles is 4-0 against the NFC East.

—San Francisco has a league-low 38 catches and 480 yards receiving from wideouts.

—The Rams are tied for the NFL lead with 20 sacks after getting eight at Washington. DT Aaron Donald tied a career high with four sacks and also had a forced fumble last week. Donald is the fifth player since 2000 with multiple four-sack games and he has a sack in six straight games against San Francisco.

— The Niners have allowed five sacks i n back-to-back games for the first time since 2014.

Denver (1-3) at New England (2-2)Originally scheduled for last Sunday and also affected by the Titans’ outbreak, both teams could benefit from the one-week delay. QBs Cam Newton (coronavirus) for the Patriots and Drew Lock (shoulder) for the Broncos figure to be back on the field. Denver also gets back top runner Phillip Lindsay after a three-week absence.

The Patriots have won six of the past seven meetings, including four straight in New England. Julian Edelman has 24 catches for 274 yards and three touchdowns in his past three meetings with Denver.

Houston (1-4) at Tennessee (4-0)Romeo Crennel replaced Bill O’Brien as Texans coach and the team promptly won for the first time. That was against weak Jacksonville. The Titans, despite their COVID-19 issues in recent weeks, are a much more formidable foe.

Look for Derrick Henry toting the ball — often. He ranks third in the NFL with 376 yards rushing and ran for 211 yards and three touchdowns in the previous meeting with Houston.

Atlanta (0-5) at Minnesota (1-4)Raheem Morris, like Crennel a former head coach now serving in an interim role, gets his chance to emulate Crennel. Morris was promoted after the firing of Dan Quinn last Sunday.

The Falcons, who closed their facility Thursday because of a positive COVID-19 test, have their worst start since losing their first eight games in 1996.

Baltimore (4-1) at Philadelphia (1-3-1)Philly begins a three-game homestand against a team that will not make things comfortable at the Linc — even if the Ravens are 0-2 in Philadelphia.

Baltimore has won eight straight road games. Lamar Jackson has 18 TD passes and five interceptions during that streak. And the Ravens have allowed an NFL-low 15.2 points per game in 2020.

The banged-up Eagles seem to have found a No. 1 wideout in Travis Fulgham. He had 10 receptions for 152 yards and one TD last week after he made his first career catch in Week 4.

Detroit (1-3) at Jacksonville (1-4)Even though Detroit has scored on its opening drive in each game this season, it can’t stay in front. The Lions are the first team in NFL history to lose six consecutive games in which they led by double digits.

Jacksonville, hoping to get back three defensive starters from injuries, has lost four straight and allowed 30 or more points in each of them. It’s the third such streak in franchise history.

Cincinnati (1-3-1) at Indianapolis (3-2)The Colts had four positive coronavirus tests Friday morning, but the retests came back negative.

The Bengals have allowed 16 sacks in the past three weeks and have given up a league-high 22 this season. Indy’s defense dropped to second in points allowed (17.6) after giving up a season-high 32 last week, but still leads the league with nine interceptions.

Chicago (4-1) at Carolina (3-2)Improbably, given the rebuilding going on in Carolina, the Panthers have won three straight games after losing 10 in a row going back to 2019. Teddy Bridgewater has completed 75 of 102 passes (73.5%) for 824 yards with five TDs and one INT during the team’s three-game win streak achieved without star running back Christian McCaffrey.

Washington (1-4) at New York Giants (0-5)Things are looking up slightly with the Giants, who nearly knocked off Dallas last weekend. Coach Joe Judge seeks his first victory as the head man, and New York has won the past three meetings.

New York Jets (0-5) at Miami (2-3)As the Jets’ mess gets worse — Le’Veon Bell, signed in the summer of 2019 to revive the offense, was cut on Tuesday in part because he didn’t get along with his coach — the Dolphins are looking up.

A year ago the Dolphins had been outscored by 138 points after five games. This year they’ve outscored opponents by 23, including beating San Francisco 43-17 last week. Their offensive line is starting three draftees and none has allowed a sack.

Kansas City (4-1) at Buffalo (4-1), MondayMuch uncertainty surrounded when this game would be played, not because of anything the Bills or Chiefs had done but because of Tennessee’s COVID-19 outbreak.

Both come off losses and displayed leaky defenses in those defeats. That makes the prospect of slowing down Kansas City’s Patrick Mahomes or Buffalo’s Josh Allen not exactly enticing.

Arizona (3-2) at Dallas (2-3), Monday nightA Big D homecoming of sorts. Arizona quarterback Kyler Murray and coach Kliff Kingsbury will make their first NFL appearances in their home state. Both are quite familiar with the home of the Cowboys: Murray has a 6-0 record at AT&T Stadium from his high school and Oklahoma days. Kingsbury coached there six times with Texas Tech, going 2-4 vs. Baylor.

Cowboys QB Andy Dalton will make his first start in place of the injured Dak Prescott. The Houston-area native will be playing down the road from where he starred at TCU.