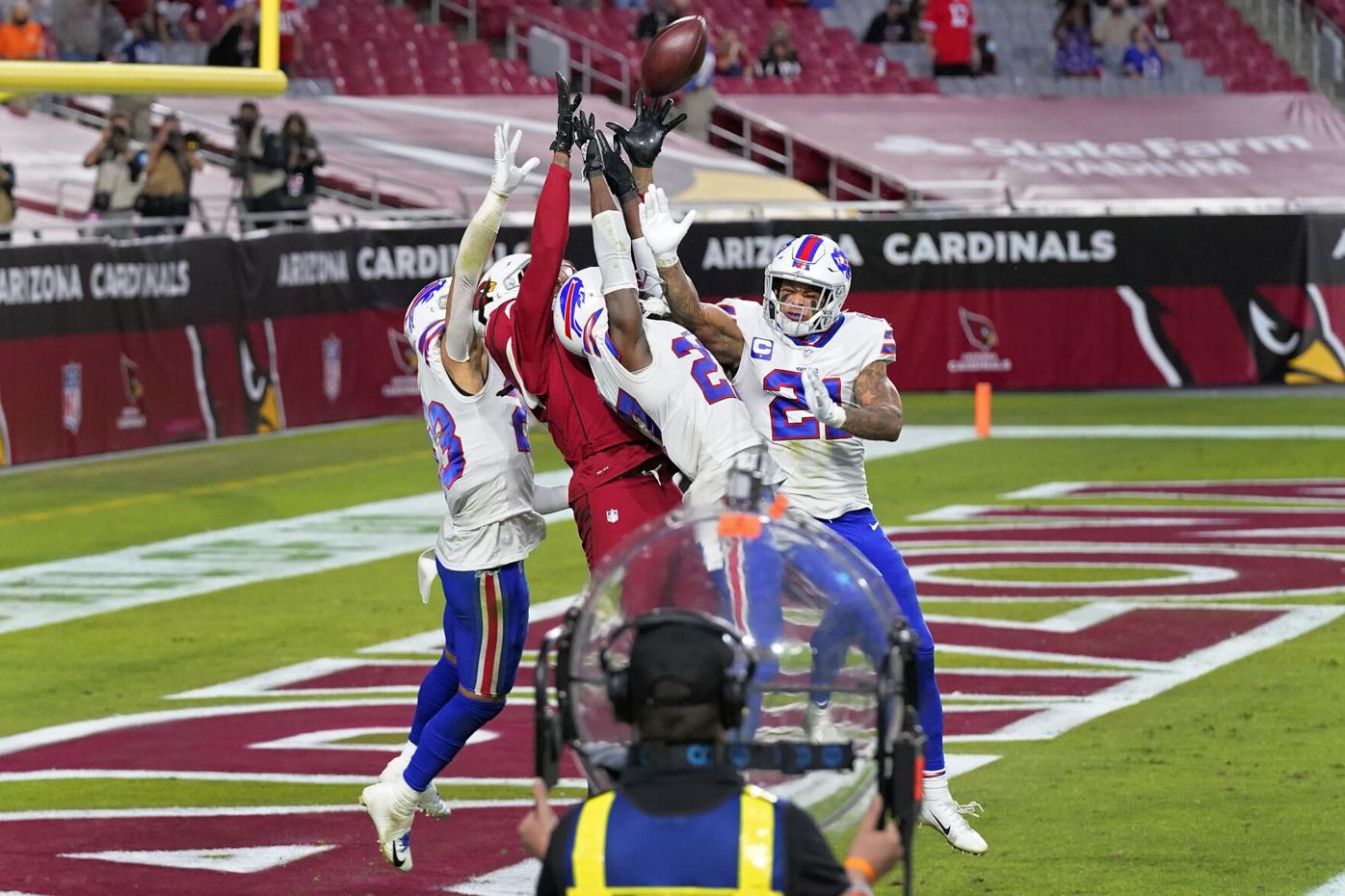 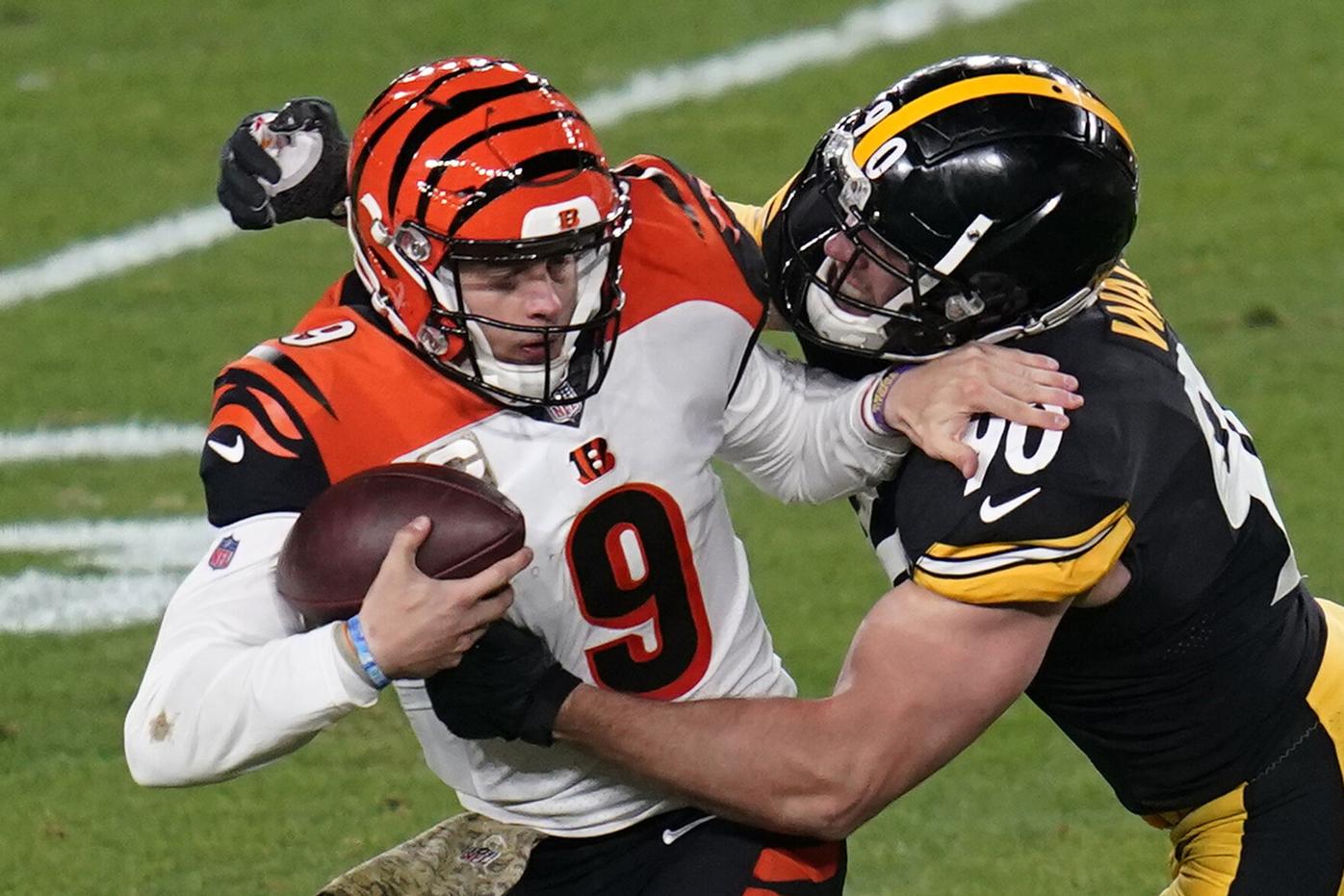 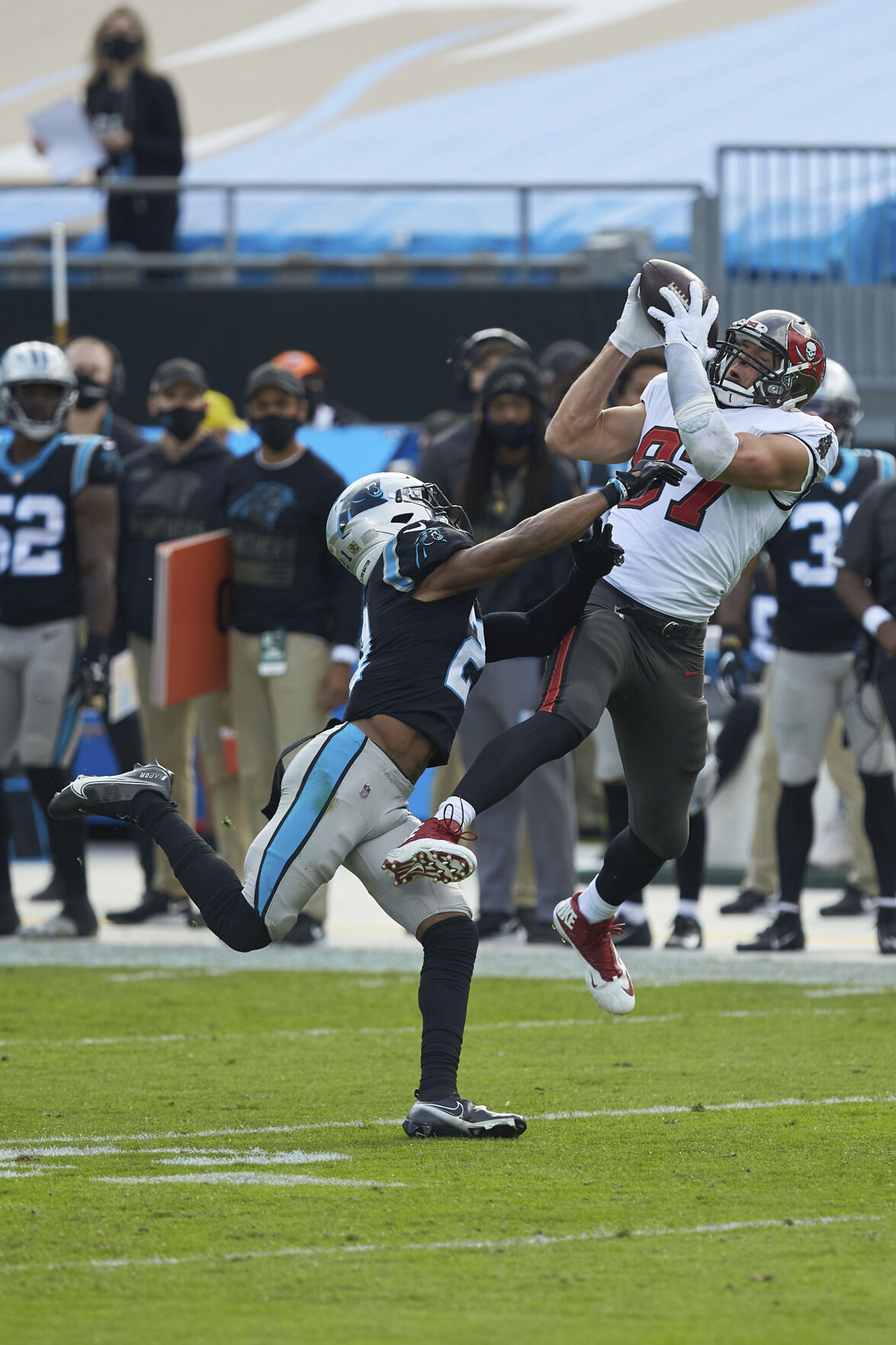 Kyler Murray completed a stunning 43-yard desperation pass to DeAndre Hopkins with 2 seconds left to lift the Arizona Cardinals to a 32-30 victory over the Buffalo Bills on Sunday.

The catch was as sensational as the throw.

The game appeared lost for the Cardinals until Murray rolled out to his left as the seconds ticked off the clock. He flung the ball toward the end zone, where Hopkins was waiting with three Buffalo defenders draped all over him. Somehow, the three-time All-Pro came down with the ball, and the Cardinals started a wild celebration in the end zone.

Josh Allen threw a 21-yard touchdown pass to Stefon Diggs with 34 seconds left that looked like it would win it for the Bills (7-3). But Murray and the Cardinals (6-3, tied for the NFC West lead) ended the Bills’ winning streak at three games with the improbable throw and catch.

STEELERS 36, BENGALS 10PITTSBURGH — Ben Roethlisberger threw for a season-high 333 yards and four touchdowns despite being forced to stay away from the team facility all week due to COVID-19 protocols.

Roethlisberger, one of four Steelers put on the COVID-19 list last Monday following contact tracing after tight end Vance McDonald tested positive for the novel coronavirus, completed 27 of 46 passes on a blustery afternoon at Heinz Field. Roethlisberger connected with Diontae Johnson and JuJu Smith-Schuster for touchdowns in the first half and found rookie Chase Claypool twice in the second half as Pittsburgh improved to 9-0.

Cincinnati rookie quarterback Joe Burrow struggled to generate any momentum behind a patchwork offensive line. Two weeks after a promising victory over Tennessee, the Bengals (2-6-1) were reminded how much work remains under second-year head coach Zac Taylor.

RAMS 23, SEAHAWKS 16INGLEWOOD, Calif. — Jared Goff passed for 302 yards, Darious Williams made two interceptions and the Rams took a share of the NFC West lead with Arizona and Seattle.

Malcolm Brown rushed for two touchdowns and Darrell Henderson had another score as the Rams (6-3) returned from their bye and held Seattle to three points after halftime to win for the fifth time in the rivals’ past six meetings.

Russell Wilson passed for 248 yards and rushed for 60 more for the Seahawks (6-3), who have lost three of four after a 5-0 start. Wilson threw two interceptions and lost a fumble, giving him 10 combined turnovers in Seattle’s three losses.

Brees’ injury appeared to occur when defensive tackle Kentavius Street was called for a personal foul on a sack in which he got a clean shot at the 41-year-old quarterback and landed directly on top of him. Officials ruled Street violated the NFL’s “bodyweight rule,” which bans defenders from landing on a defenseless passer with all or most of their weight.

Brees missed just two plays after the hit and returned for a third-down pitchback to Kamara that resulted in a 2-yard touchdown that tied it at 10.

Brees continued to play for the rest of the second quarter, going 5 for 6 on a two-minute drive that he completed with a 3-yard toss to Kamara that made it 17-10 just before halftime. But when the second half began, Jameis Winston took the field while Brees stood with his helmet on and his hands on his hips in front of New Orleans’ bench, where he watched the rest of a sixth straight victory for the Saints (7-2).

DOLPHINS 29, CHARGERS 21MIAMI GARDENS, Fla. — Tua Tagovailoa had help from a less-heralded rookie while Justin Herbert struggled against a blitz-happy defense as the surprising Dolphins earned their fifth consecutive victory.

Salvon Ahmed, making his first career start, ran for 85 yards on 21 carries and scored a 1-yard touchdown on Miami’s first play. The undrafted Ahmed filled in with two other running backs injured and sparked a ground game ranked fourth worst in the league.

Herbert threw a costly interception and was outplayed in the matchup of high draft picks by Tagovailoa, who passed for 169 yards with two scores and improved to 3-0 since taking over for Ryan Fitzpatrick. Herbert struggled against Miami’s blitzing defense and threw for a season-low 187 yards.

Derek Carr didn’t have to do much for the Raiders (6-3) offensively for a change as the running game and an opportunistic defense that came into the game last in the league with five takeaways carried the load.

Heath intercepted Drew Lock twice in the first half, Carl Nassib and Nick Kwiatkoski got picks in the fourth quarter and Nevin Lawson forced and recovered a fumble by DaeSean Hamilton to send the Broncos (3-6) to their third loss in four games.

The game changed late in the first half after Lock appeared to run in for a TD in the closing seconds that would have given the Broncos a 13-10 lead. Tight end Noah Fant was called for holding in the end zone on the play and Lock threw his second interception to Heath on the next play.

BUCCANEERS 46, PANTHERS 23CHARLOTTE, N.C. — Tom Brady threw for 341 yards and was involved in four touchdowns, Ronald Jones had a franchise-record 98-yard touchdown run, and the Buccaneers bounced back from a dreadful defeat.

Coming off the most lopsided loss of his illustrious career — a 38-3 defeat to the Saints — Brady threw touchdown passes to Cameron Brate, Mike Evans and Rob Gronkowski, then ran for another score in the fourth quarter to seal the win.

Jones’ run in the third quarter broke open a tight game. He raced up the middle behind left guard, shook off safety Tre Boston and was gone. Jones finished with a career-high 181 yards and became the fourth NFL player with a TD run of 98 yards or longer, joining Tony Dorsett, Derrick Henry and Ahman Green.

Chris Godwin had 92 yards receiving for the Buccaneers (7-3).

Rodgers put the Packers (7-2) ahead for good with 9:11 left by throwing a 6-yard TD pass to Davante Adams, who had left with an ankle injury earlier in the second half. Rodgers also had a 5-yard touchdown run and a 78-yard scoring strike to Marquez Valdes-Scantling, who caught four passes for a career-high 149 yards.

Keelan Cole scored on a franchise-record 91-yard punt return and a 12-yard reception for Jacksonville (1-8), which lost its eighth straight. Jacksonville’s James Robinson rushed for 109 yards on 23 carries.

Cole became the first Jaguar ever to score on a punt return and a reception in the same game, as well as the first player from any team ever to accomplish that feat against the Packers.

LIONS 30, WASHINGTON 27DETROIT — Matt Prater made a 59-yard field goal as time expired. Matthew Stafford threw two of his three touchdown passes in the first half and directed the winning drive with just 16 seconds left. Rookie defensive end Chase Young was called for roughing the passer, giving Detroit the ball at midfield. Stafford threw a 9-yard pass to Marvin Jones to set up the kick.

The Lions (4-5) won at home for the first time in more than a year after building a 14-point lead at halftime and going ahead 24-3 midway through the third quarter.

Washington (2-7) pulled into a tie by scoring touchdowns on three straight series in the second half in Alex Smith’s first start in nearly two years.

The Giants improved to 3-7 under first-year coach Joe Judge with their second straight win, snapping an eight-game losing streak against Philly. The Eagles (3-5-1) still lead the NFL’s worst division, the NFC East. Dallas and Washington are each 2-7.

Carson Wentz and the rest of Philadelphia’s offense were out of sync following a bye. They were 0 for 9 on third downs. Boston Scott had a 56-yard TD run early in the third quarter but the Eagles couldn’t get closer.

Jones ran untouched 34 yards for a score to cap a well-executed 85-yard drive to start the game, and the Giants led the entire game. It was similar to Jones’ 80-yard run against Philadelphia in a 22-21 loss on Oct. 22 except he didn’t stumble at the 8 this time.

BROWNS 10, TEXANS 7CLEVELAND — Nick Chubb returned from a stint on injured reserve and scored a touchdown early in the fourth quarter — topping 100 yards rushing along with teammate Kareem Hunt.

Chubb reeled off a 59-yard run with 1:07 left and then smartly ran out of bounds at the 2-yard line instead of scoring so the Texans, who were out of timeouts, wouldn’t get the ball back. Chubb finished with 126 yards on 19 carries in nasty weather. Hunt finished with 104 yards, including 37 yards — and three first downs — on Cleveland’s final drive as the Browns (6-3) ran out the clock.

With the Browns up 3-0 on a day when passing was almost impossible, Chubb, playing for the first time since Oct. 4, took a handoff on the right, cut left and ran past Texans defensive end J.J. Watt as Cleveland finally found the end zone to go up 10-0.

Deshaun Watson’s 16-yard TD pass to Pharaoh Brown with 4:59 left pulled the Texans (2-7) within three, but Hunt pounded away after the Browns were backed up at their 3 after a muffed kickoff.