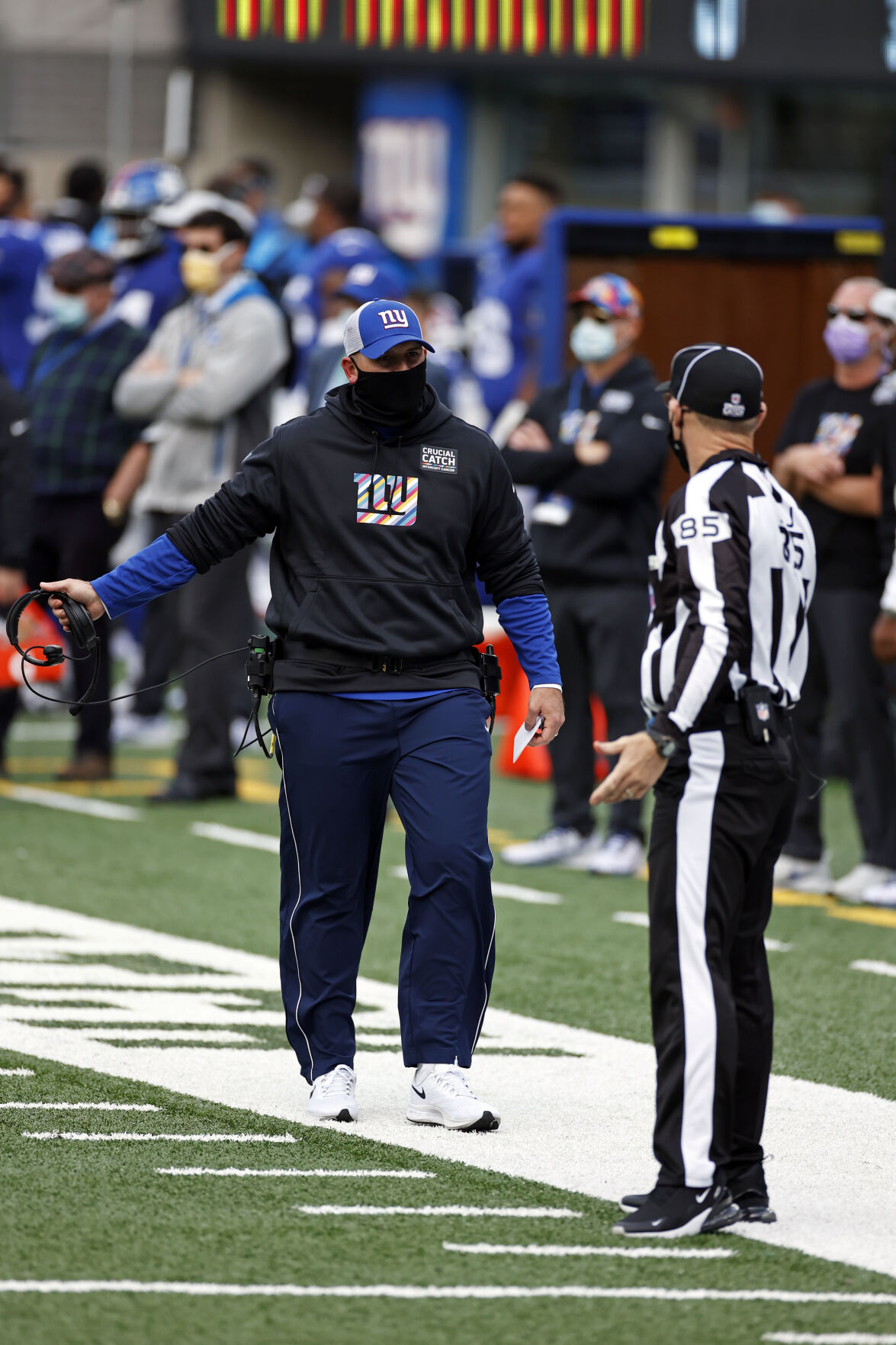 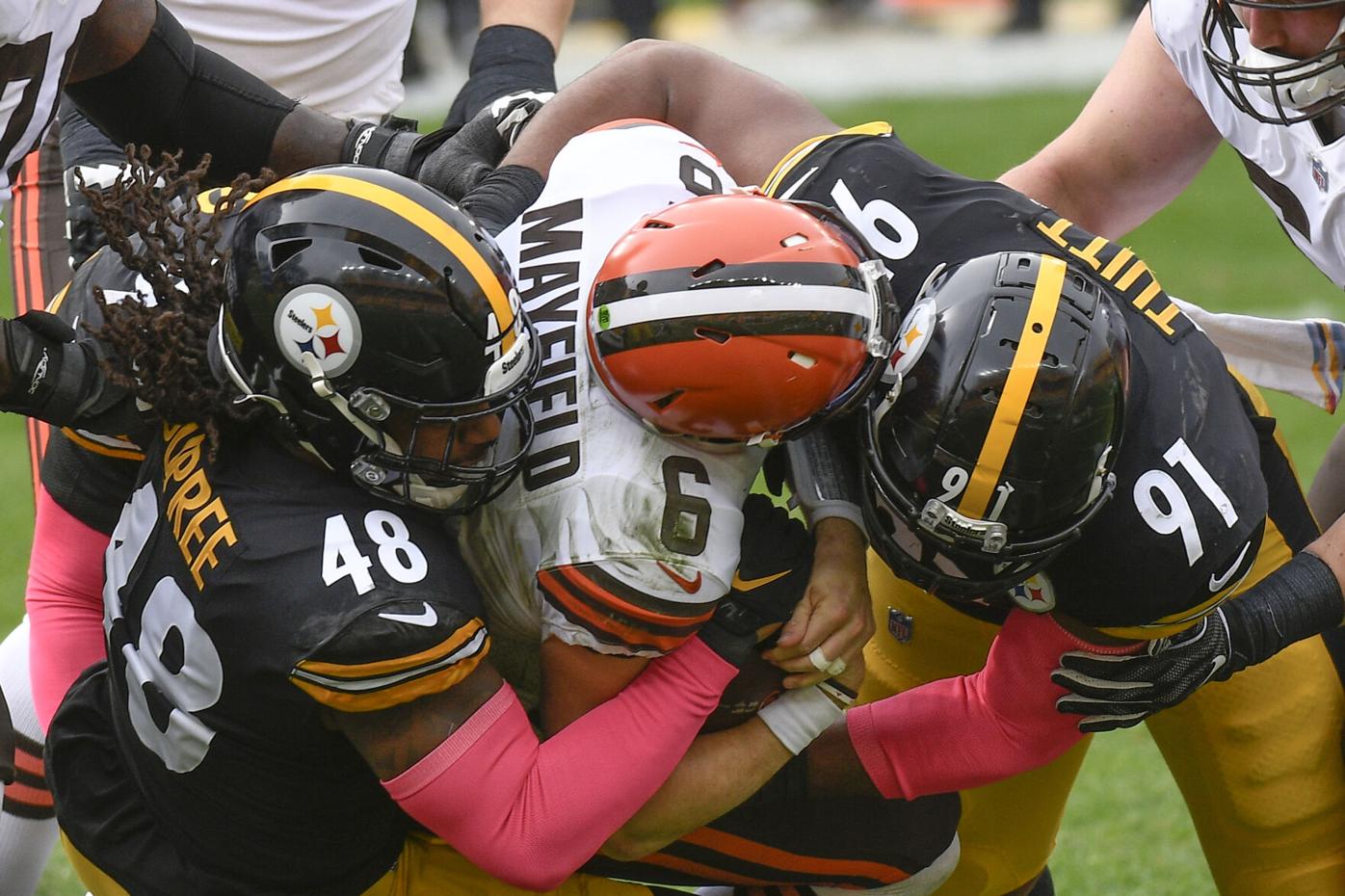 Cleveland Browns quarterback Baker Mayfield is sacked by Pittsburgh Steelers defensive end Stephon Tuitt and outside linebacker Bud Dupree during the first half of a game, Sunday, in Pittsburgh. The Steelers battered the Browns to a 38-7 blowout.

Cleveland Browns quarterback Baker Mayfield is sacked by Pittsburgh Steelers defensive end Stephon Tuitt and outside linebacker Bud Dupree during the first half of a game, Sunday, in Pittsburgh. The Steelers battered the Browns to a 38-7 blowout.

PITTSBURGH — Not yet Cleveland. At least, not in Pittsburgh.

James Conner ran for 101 yards and a touchdown and the Steelers battered the Browns in a 38-7 blowout victory on Sunday to improve to 5-0 for the first time since 1978. Ben Roethlisberger added 162 yards passing and a score.

The Browns (4-2) were unable to get anything going against a defense that sacked aching Baker Mayfield four times, picked him off twice and chased him late in the third quarter with the game out of reach. The NFL’s top rushing offense managed 75 yards on the ground — 113 below its season average — as the Steelers dominated both sides of the line of scrimmage in easily their best performance in 2020.

Safety Minkah Fitzpatrick stepped in front of a Mayfield pass and raced 33 yards to the end zone fors an early 10-0 lead. The Browns, off to the franchise’s best start since 1994, never really recovered in a stadium where they haven’t won since Mayfield was in elementary school.

RAVENS 30, EAGLES 28PHILADELPHIA — Lamar Jackson threw for a touchdown and ran for a score and the Ravens held on.

The Eagles (1-4-1) came in missing seven offensive starters, including four offensive linemen, and then lost two more when running back Miles Sanders left in the third quarter and tight end Zach Ertz exited in the fourth.

Still, the Ravens (5-1) needed to prevent a 2-point conversion with 1:55 remaining to secure the win. Carson Wentz was stopped by L.J. Fort and Matthew Judon trying to run it in. The Eagles wouldn’t have needed the conversion after Wentz sneaked in from the 1 if coach Doug Pederson kicked the extra point when they scored early in the third quarter to cut Baltimore’s deficit to 17-6.

Wentz tossed two TD passes, was sacked six times and managed to finish the game along with center Jason Kelce as Philadelphia’s only healthy starters.

Jackson, the reigning NFL MVP, was efficient, passing for 186 yards. He ran for a 37-yard TD and had 108 yards on the ground.

TITANS 42, TEXANS 36, OTNASHVILLE, Tenn. — Derrick Henry took a direct snap and ran 5 yards for a touchdown 3:30 into overtime and the Titans remained undefeated.

The Titans (5-0) overcame two turnovers, Stephen Gostkowski having a field goal blocked and missing another, and the defense giving up 335 yards passing and four touchdown passes to Deshaun Watson.

Ryan Tannehill, who had three of his 19 career winning drives to start this season, drove the Titans 76 yards before finding A.J. Brown on a 6-yard TD pass with 4 seconds left. Gostkowski made the extra point.

Henry, last season’s rushing leader, ran for 202 yards in regulation, including a 94-yard TD sprint. In overtime, he took a screen pass 53 yards on the second play. He capped the six-play, 82-yard drive with a wildcat snap for his second TD, finishing with 212 yards rushing and 52 yards receiving.

The Titans have their second-best start in franchise history since winning the first 10 games in 2008. Their win, combined with Pittsburgh’s victory over Cleveland, sets up a showdown between the AFC’s last two undefeated teams here in a week.

Foles finished with 198 yards passing and a touchdown and David Montgomery added 58 yards on the ground as the Bears (5-1) opened the season 3-0 on the road for the first time since 2006, when they reached the Super Bowl.

Bridgewater was under duress most of the game. He was held to a season-low 216 yards passing and was intercepted twice.

Chicago improved to 2-1 with Foles as the starter. The 2018 Super Bowl MVP also rallied the Bears past the Falcons when coach Matt Nagy benched Mitchell Trubisky in Week 3.

GIANTS 20, WASHINGTON 19EAST RUTHERFORD, N.J. — Joe Judge and the New York Giants have finally won, and they have rookie Tae Crowder and a risky gamble by Washington coach Ron Rivera for making them relevant again.

Crowder, the last player taken in the NFL draft — Mr. Irrelevant — scooped up a fumble and ran 43 yards for a touchdown with 3:28 to play.

The game wasn’t decided until Rivera rolled the dice after a 22-yard touchdown pass from Kyle Allen to Cam Sims with :36 left in regulation to cap a 10-play, 75-yard march.

Instead of playing for overtime, Rivera had Washington (1-5) go for the win with a 2-point conversion in an attempt to get back in the mediocre NFC East race. Allen found no one open, scrambled to his left and had his pass under pressure fall incomplete.

FALCONS 40, VIKINGS 21MINNEAPOLIS — Julio Jones returned from injury to catch two of Matt Ryan’s four touchdown passes, as the Falcons got their first victory of the season — one week after the firing of head coach Dan Quinn.

Kirk Cousins threw three interceptions in the first half for the first time in his career, and the Falcons (1-5) turned those picks into 17 points to build a 20-0 lead at the break. That proved to be solid enough for even this falter-prone team.

The depleted Vikings (1-5) surrendered 40-plus points for the second time this year after going five straight seasons without any such games. After another injury left them with only rookies available at cornerback for more than half the game, Ryan completed 30 of 40 passes for 371 yards to rebound from a three-week stretch during which he only found the end zone once.

Jones, who missed all but one half of the previous three games with hamstring trouble, had eight receptions for 137 yards. Calvin Ridley and Hayden Hurt each chipped in a touchdown catch, Younghoe Koo kicked four field goals, and the Falcons rewarded interim coach Raheem Morris with a win in his debut.

COLTS 31, BENGALS 27INDIANAPOLIS — After trailing 21-0, Philip Rivers rallied the Colts with three touchdown passes, including the go-ahead score on the first play of the fourth quarter. It equaled the largest comeback in the franchise’s regular-season history. None of the previous four came at home, and the last time Indianapolis (4-2) achieved the feat came in 2003 at Tampa Bay. Only a 28-point comeback in the 2013 playoffs against Kansas City was a larger margin.

It’s the fifth time the Bengals (1-4-1) have blown a 21-point lead in franchise history, their second-worst all time.

Rivers was sensational. He wound up 29 of 44 with 371 yards, one interception, and threw the go-ahead 14-yard score to Jack Doyle. Rodrigo Sanchez added a 40-yard field goal and Julian Blackmon picked off Joe Burrow with 39 seconds left to seal it.

Cincinnati, down 28-27, could have taken the lead with a 48-yard field goal with 8:02 to play, but Randy Bullock hit the right upright.

LIONS 34, JAGUARS 16JACKSONVILLE, Fla. — Rookie D’Andre Swift ran for a career-high 116 yards and two touchdowns, and Matthew Stafford got an elusive TD pass against the only team he hadn’t thrown one against in 12 NFL seasons.

Detroit (2-3) made this one look easy, somewhat surprising considering the Lions had lost six straight in which they led by double digits. They’ve already done it three times this season, collapsing in losses to Chicago, Green Bay and New Orleans.

It probably helped that this one came against hapless Jacksonville (1-5), which has now lost five straight and allowed at least 30 points in each. It’s the first time in franchise history the Jaguars have done that, putting the jobs of coach Doug Marrone and defensive coordinator Todd Wash in more jeopardy.

Lions coach Matt Patricia can breathe easy for a week. He had lost 15 of his previous 17 games, raising speculation about his future with the franchise.