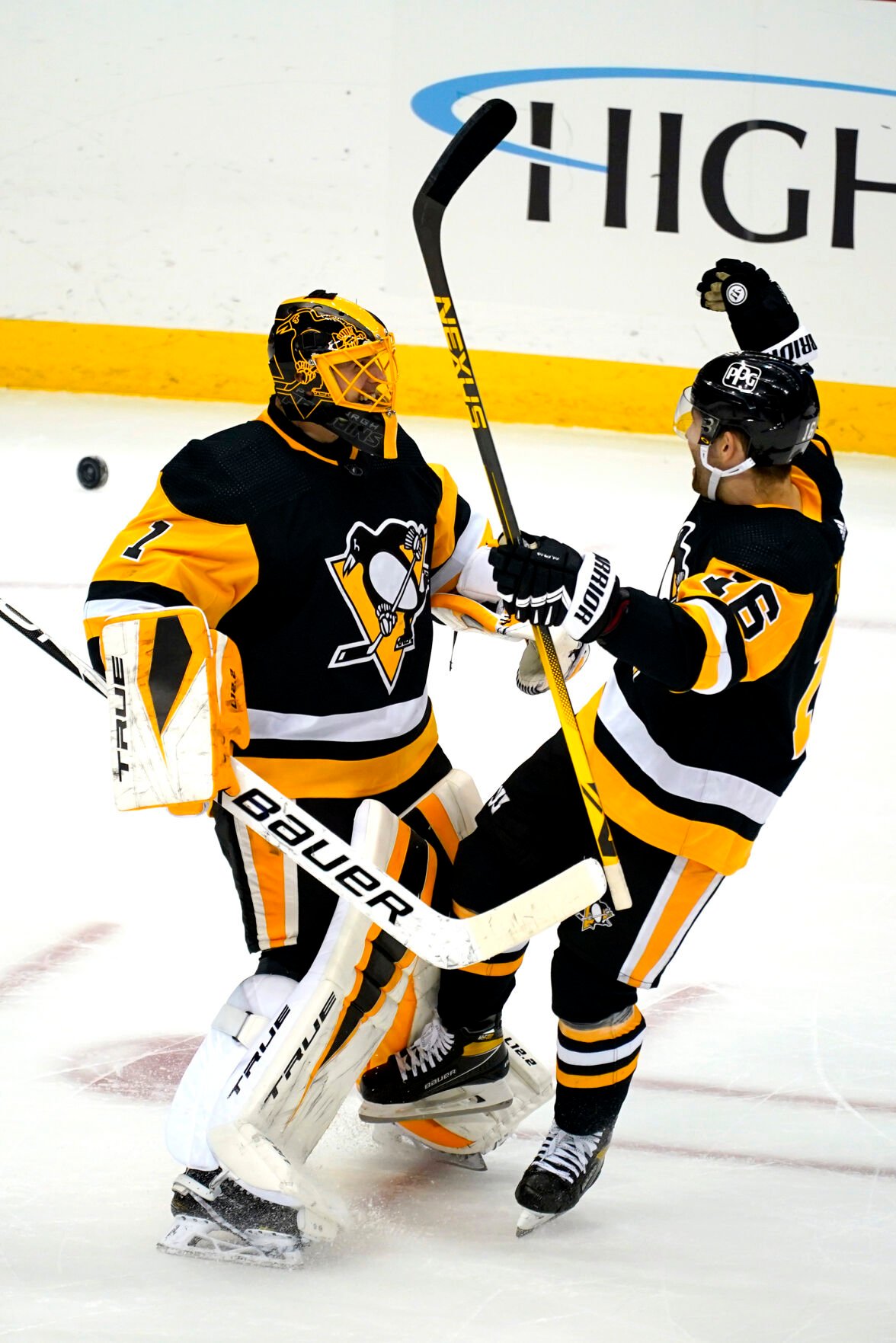 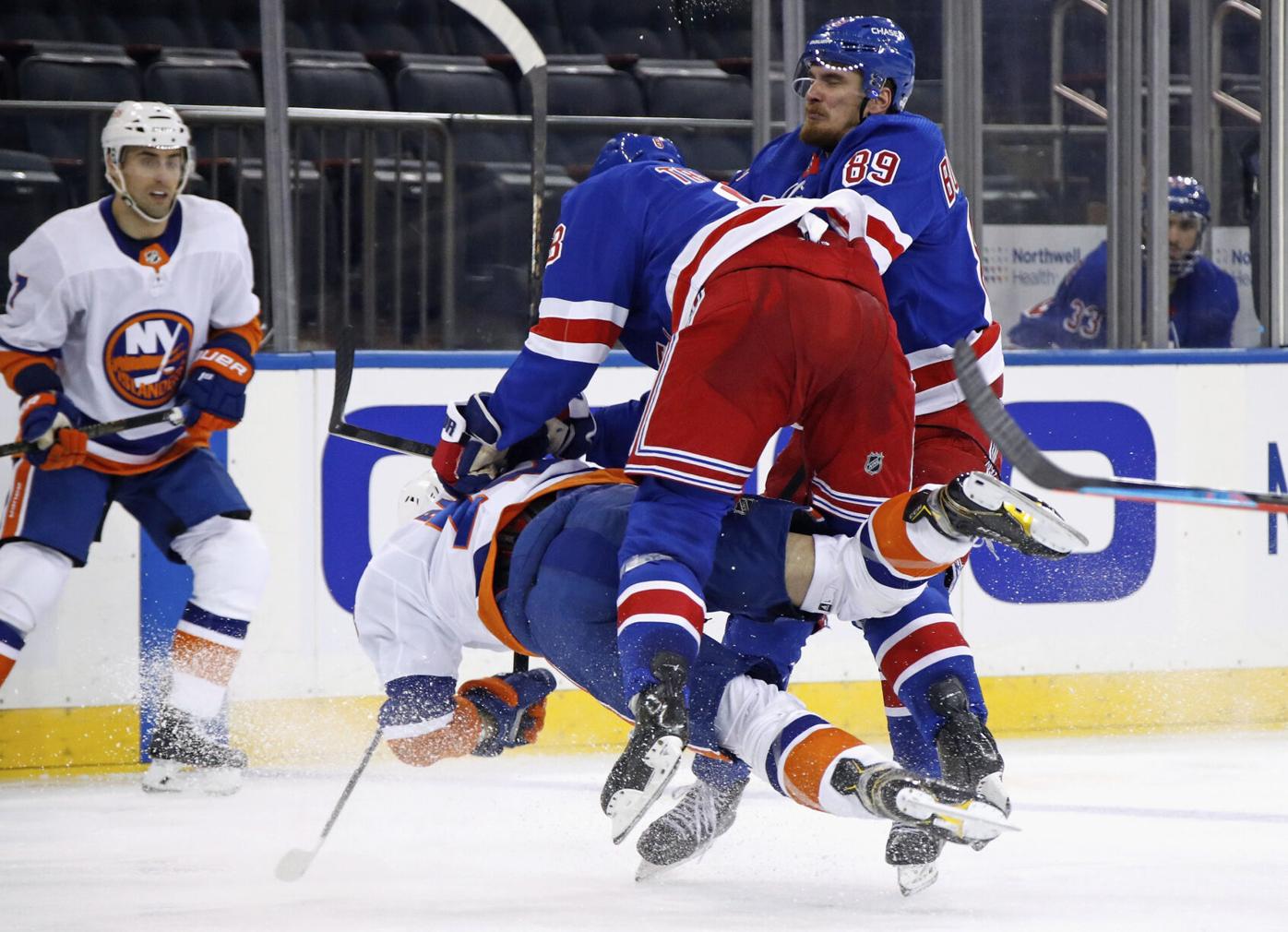 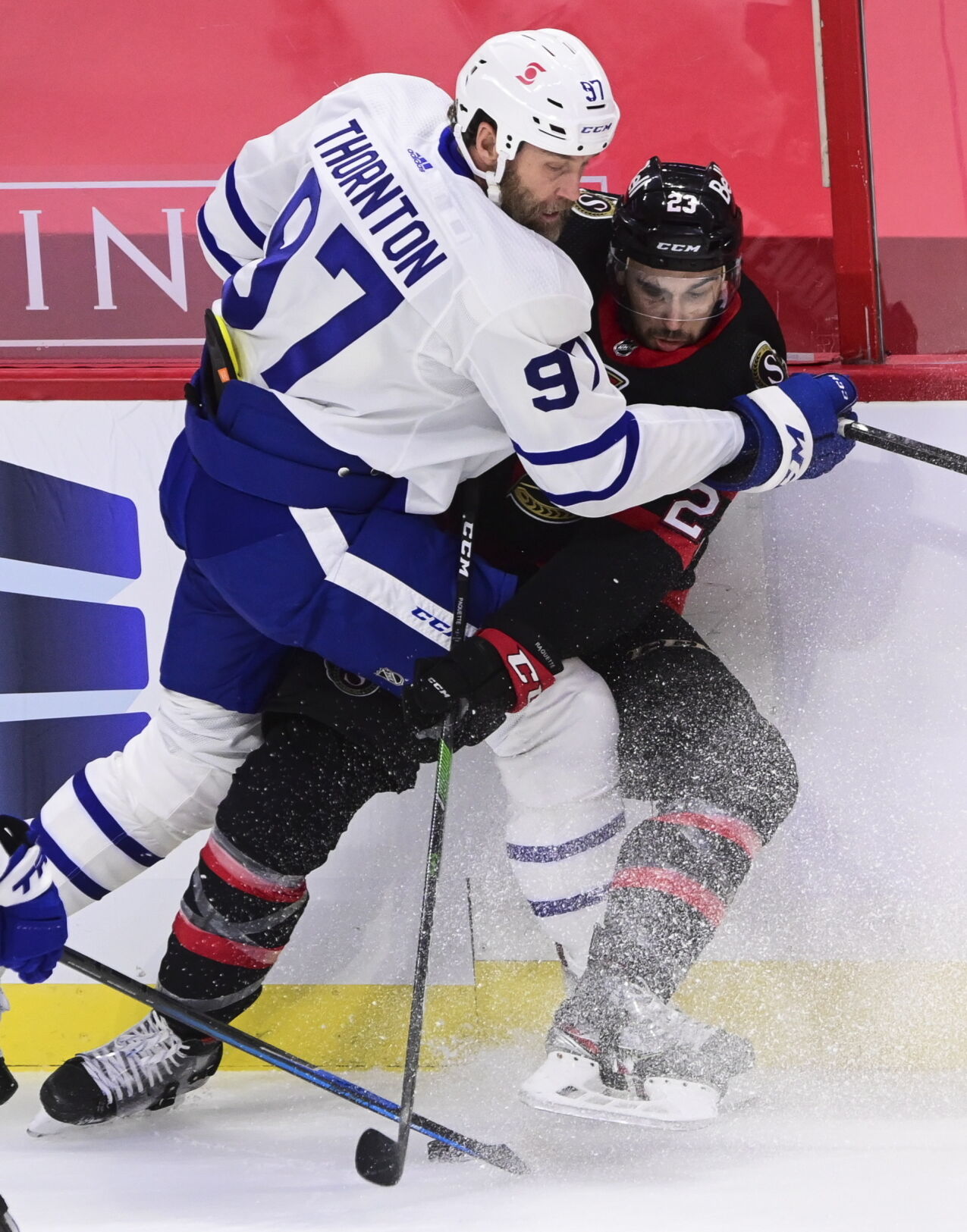 Toronto Maple Leafs center Joe Thornton pushes Ottawa Senators center Cedric Paquette against the boards during a game over the weekend. Thornton scored his first goal as a member of the Leafs in a 3-2 win.

Toronto Maple Leafs center Joe Thornton pushes Ottawa Senators center Cedric Paquette against the boards during a game over the weekend. Thornton scored his first goal as a member of the Leafs in a 3-2 win.

PITTSBURGH — Casey DeSmith felt the puck at his feet, looked down to confirm it was indeed the case then exhaled as his Pittsburgh Penguins teammates poured over the bench in the middle of an empty arena to congratulate their backup goaltender, the one hardly playing like a backup.

Starting in place of a shaky Tristan Jarry, DeSmith turned aside 20 shots he faced in regulation and overtime then stuffed Washington’s T.J. Oshie, Nicklas Backstrom, Evgeny Kuznetsov and Alex Ovechkin in the shootout as the Penguins picked up their first win of the season with a 4-3 victory on Sunday.

Given the start after Jarry allowed nine goals on 31 shots while getting swept in Philadelphia last week, DeSmith picked up his first victory since March 14, 2019, when he denied Ovechkin after Jake Guentzel put Pittsburgh up in the fourth round of the shootout.

DeSmith figured Ovechkin would try to fire one past him rather than deke his way to the net. DeSmith stayed upright as Ovechkin closed in and felt the familiar smack of rubber hitting him and not the net.

“I saw the puck at my feet and I was ecstatic,” DeSmith said.

Evan Rodrigues, Colton Sceviour and Marcus Pettersson all scored their first goals of the season for Pittsburgh, which rallied twice from one-goal deficits and clamped down on the Capitals for the final 45 minutes

NEW YORK — Pavel Buchnevich and Artemi Panarin each scored twice and Alexandar Georgiev stopped 23 shots for his fifth career shutout, leading the New York Rangers to a win over the Islanders on Saturday night.

Kaapo Kakko also scored as the Rangers bounced back for their first victory two nights after being blanked 4-0 by the Islanders in the season opener.

“Today was a much better defensive game from us,” Georgiev said. “The score dictated a lot of the game because we were leading from the start. We managed to play really smart hockey, let the chances come to us and not rush anything.”

Ilya Sorokin had 27 saves in his NHL debut for the Islanders, getting the start after Semyon Varlamov was hit near the throat by a shot from Cal Clutterbuck in warmups. Cory Schneider, who signed a one-year contract with the Islanders this month, dressed as the backup.

“We hung him out to dry,” Islanders coach Barry Trotz said of Sorokin. “We put him in a tough circumstance. … Turnovers, bad plays, poor execution, we were junk today.”

The Islanders went 0-4 on the power play and Mathew Barzal was called for three minor penalties.

GLENDALE, Ariz. — Phil Kessel’s first season in the desert did not go as planned.

Expected to give Arizona a huge scoring boost, he instead struggled with injuries and his production suffered.

It’s just two games into the season, but it seems Phil the Thrill is back.

Kessel scored two goals, Antti Raanta stopped 31 shots and the Coyotes bounced back from an opening loss to beat the San Jose Sharks on Saturday.

The Coyotes pulled off the biggest move of the 2019 season by acquiring Kessel from Pittsburgh. The Coyotes have regularly been among the NHL’s lowest-scoring teams and Kessel had been one of the league’s most productive players, scoring at least 60 points eight times during his career.

Kessel never lived up to expectations, in large part due to injuries, finishing with 14 goals and 24 assists in 70 games.

The 33-year-old worked hard during the short time off since the NHL bubble and it has paid off. He scored the tying goal in the closing seconds of the opener and had goals in each of the first two periods Saturday.

DETROIT — Robby Fabbri scored the tiebreaking goal with 2:42 left in the third period, Dylan Larkin got his second goal into an empty net and the Detroit Red Wings beat the Carolina Hurricanes on Saturday night.

Fabbri fluttered the puck past Petr Mrazek from the front of the crease off a pass from Filip Zadina behind the net. Zadina also set up Bobby Ryan to score in his Red Wings debut, breaking a scoreless tie early in the second period, after the veteran forward missed the opener with an injury.

Larkin scored a tiebreaking goal early in the third just 18 seconds after Carolina went ahead. Detroit’s Jonathan Bernier finished with 29 saves in his season debut.

Vincent Trocheck pulled the Hurricanes into a tie on a power play early in the third and Andrei Svechnikov made it 2-all midway through the final period. Carolina could not tie the game a third time to extend its chances to win.

“We have a lot of fun out there,” Thornton said. “I think we’ll continue to keep growing as a line because we are having fun and we get excited before every game. I think you can tell each game we’re getting better and that’s a real good sign.”

Marner had two assists and Thornton and Matthews one each to help the Maple Leafs rebound from a 5-3 loss to the Senators on Friday night at Canadian Tire Centre.

The 41-year-old Thornton signed a one-year deal with the Maple Leafs in the offseason.

Jake Evans also scored, and Phillip Danault and Brendan Gallagher each had two assists to help Montreal rebound from an opening overtime loss in Toronto.

The teams will meet again Monday in Edmonton.

NASHVILLE, Tenn. — The Nashville Predators are showing scoring depth, good goaltending and an ability to finish.

It’s all part of why they’re off to an undefeated start.

Colton Sissons, Luke Kunin and Filip Forsberg also scored in the third period, and Rocco Grimaldi had a goal for Nashville. Goalie Juuse Saros made 42 saves.

The Predators now have won seven of their last eight against Columbus in Nashville, a nice omen for the former Central Division rivals reunited in this pandemic-affected season.

LOS ANGELES — The Minnesota Wild won only two games last season when trailing after two periods. They have already equaled that total during the first week of the season.

Marcus Johansson scored with 11 seconds remaining in overtime Saturday night as the Wild rallied for a victory over the Los Angeles Kings for the second straight game after trailing by two goals after two periods.

Johansson took the pass from Kirill Kaprizov and one-timed a wrist shot past Kings goaltender Jonathan Quick on his stick side to complete the comeback and give Minnesota its first 2-0 start since 2015-16.

It is also the first time since October 2014 that the Wild have overcome multi-goal deficits in the third period in consecutive games.

Ryan Suter sent it to overtime with 2 seconds remaining with a snap shot near the blue line that Quick was unable to get his glove on.

Calgary’s home-opener was the first NHL game at Scotiabank Saddledome since March 8, 2020, a span of 10 months and eight days.

Vancouver goaltender Braden Holtby stopped 32 of 35 shots in the loss.

LAS VEGAS — Max Pacioretty scored 7 seconds into overtime to give the Vegas Golden Knights a victory over the Anaheim Ducks on Saturday night.

Vegas rallied for the win after William Karlsson tied it with 1:22 left in regulation.

After winning the opening faceoff of overtime, Pacioretty raced up ice while Mark Stone gathered the puck and the two skated in for a 2-on-1 break. Stone dished in front of Anaheim defenseman Cam Fowler and Pacioretty fired home the game-winner.

Marc-Andre Fleury, who came into the game 15-4-0 with a .927 save percentage and 1.95 goals-against average against the Ducks, stopped 21 shots.

Max Comtois scored for Anaheim and John Gibson had 31 saves to fall to 2-10-2 in his career against Vegas.