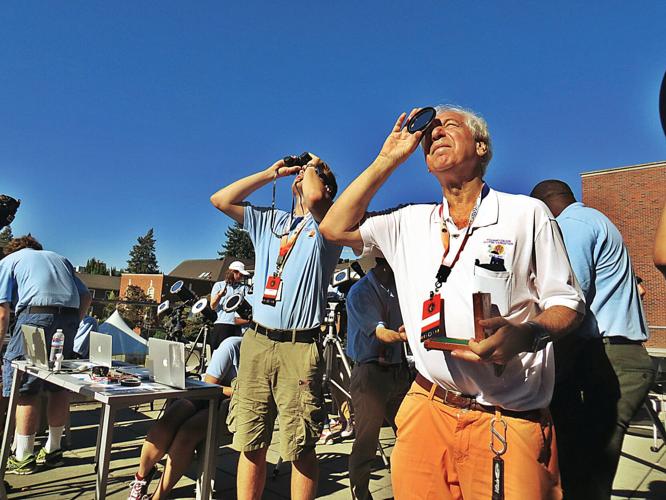 Williams College astronomer Jay Pasachoff, right, views his 66th solar eclipse with students on his expedition team to document the Aug. 21, 2017, event at Willamette University in Salem, Ore. He died Sunday in Williamstown. 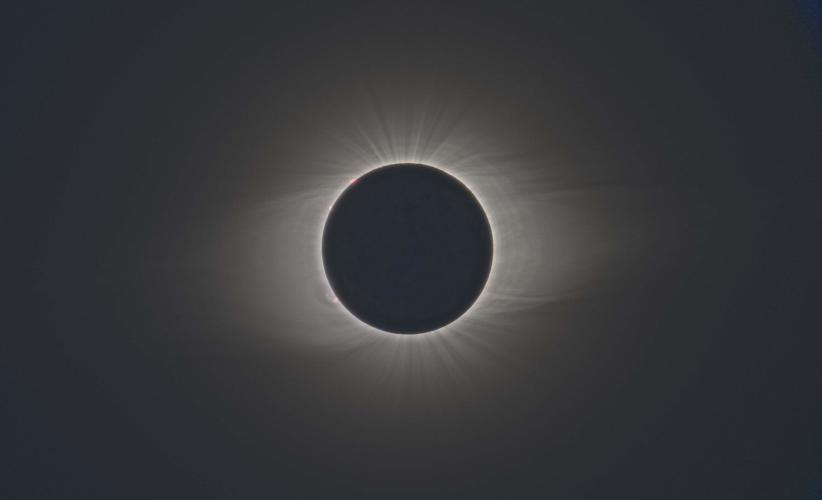 An initial composite image of the July 2, 2019, total solar eclipse, as documented by a Williams College expedition team at the Cerro Tololo Inter-American Observatory, Chile. 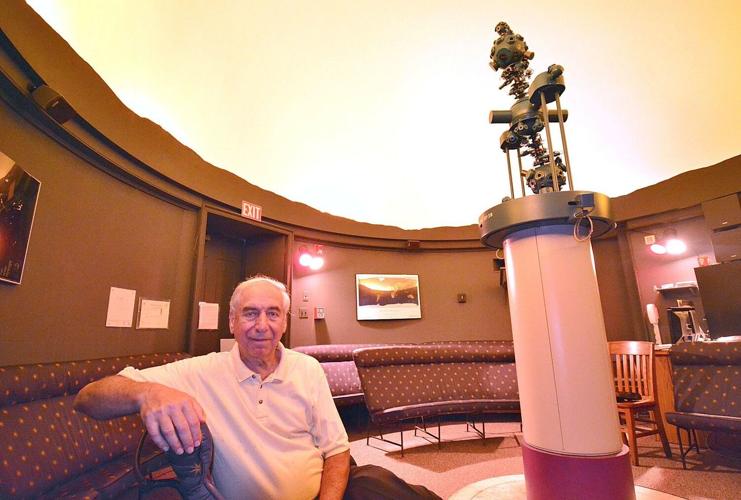 Williams College astronomer Jay Pasachoff sits inside the Hopkins Observatory in Williamstown in 2018. Pasachoff  marked big milestones that summer, from his 75th birthday to his 69th viewing of an eclipse, as well as the centennial of the International Astronomical Union, for which he chairs a solar eclipse working group.

Jay M. Pasachoff, an astronomer at Williams College who spent more than 50 years traveling the world to observe solar eclipses and, with 74 sightings under his belt, probably witnessed more of them than any other human in history, died on Sunday at his home in Williamstown, Massachusetts. He was 79.

The cause was lung cancer, his wife, Naomi Pasachoff, said.

For Jay Pasachoff, the sublime grandeur of a total eclipse was so overwhelming that it defied easy description, and its appeal needed no explanation: If you didn’t understand it, he would say, you obviously hadn’t seen one. Thousands of people knew what he meant.

Hordes of them travel thousands of miles to spend a few minutes in what amounts to an artificial night in the middle of the day.

“We are umbraphiles,” he wrote in The New York Times in 2010. “Having once stood in the umbra, the moon’s shadow, during a solar eclipse, we are driven to do so again and again, whenever the moon moves between the Earth and the sun.”

But he was more than just an eclipse fan. He studied the corona, the outermost layer of the sun’s atmosphere, which, being one-millionth as bright as the sun itself, is best studied when the rest of the sun is obscured by the moon — in other words, during an eclipse.

The corona may pale in the light of the sun, but it is a million degrees hotter, a mystery that enthralled Pasachoff. He liked to say that the mystery had actually been solved, but that it had 17 possible solutions, and one focus of his work was testing those theories.

Pasachoff preferred to be called an “eclipse preceder” instead of an “eclipse chaser,” with good reason. He would spend up to three years before an eclipse preparing equipment, lining up grants, arranging travel and planning for any of the countless contingencies that might interfere with the few minutes he and his team would have to watch the moon pass before the sun.

For starters, it wasn’t enough to know the path of an eclipse across the Earth’s surface. Pasachoff studied weather almanacs to find the site least likely to be obscured by a freakish storm or morning mist. Sometimes that meant trekking to the deserts of northern Kenya, or flying 41,000 feet above Antarctica, as he did on Dec. 4, 2021, on what turned out to be one of his last expeditions.

Although Williams College has no graduate program in astronomy, Pasachoff worked so closely with his undergraduate students that over time he built a vast network of contacts across the world, making him one of the best-connected scientists around.

“He knew people everywhere,” Michael J. Person, the director of the Wallace Astrophysical Observatory at MIT, said in an interview. “I knew I could call Jay Pasachoff and say, ‘I need a telescope in New Guinea,’ and he would know someone there.”

It might seem, to an untrained eye, that one eclipse is more or less the same as any other. But Pasachoff knew otherwise. To him the sun was less a stable object than a river, in its perpetual transmutation, and he said he never saw the same eclipse twice.

Jay Myron Pasachoff was born on July 1, 1943, in Manhattan. His father, Samuel, was a surgeon who left soon after Jay’s birth to serve in the Army Medical Corps; during World War II, he landed in Normandy and participated in the Battle of the Bulge. His mother, Anne (Traub) Pasachoff, was a teacher.

After his father returned from the war, the family moved from Manhattan to the Bronx, where Jay attended the Bronx High School of Science. His interest in astronomy started early, with visits to the Hayden Planetarium at the American Museum of Natural History; by the time he was in high school he was building telescopes with the Amateur Astronomers Association of New York.

He entered Harvard University at 16. For his freshman seminar, he chose an astronomy course with Donald H. Menzel, an expert on solar eclipses. By chance, just a few weeks into the semester, a total eclipse was set to begin off the coast of Massachusetts, near Marblehead. Menzel borrowed a DC-3 plane from Northeast Airlines and took his class, along with the chief executive of Polaroid, to watch.

It was Pasachoff’s first total eclipse, and he was hooked. He had intended to major in mathematics, but he ended up in astronomy instead. He received his bachelor’s degree in 1963, his master’s in 1965 and his Ph.D. in 1969, all from Harvard.

By Jove: Jupiter-Saturn encounter, at a cosmic distance, has a nice ring to it

After a few years as a postdoctoral fellow at the California Institute of Technology, he arrived at Williams College in 1972 as the sole member of its astronomy department and the director of its observatory, the oldest of its kind in the United States.

He married Naomi Schwartz in 1974. Along with her, he is survived by his daughters, Eloise and Deborah; his sister, Nancy Kutner; and five grandchildren.

While his contributions to astronomy were many, Pasachoff was equally if not better known as, in his own words, a proselytizer: speaking to the news media, writing for general interest science publications and encouraging amateurs to share his passion for the night sky.

His expeditions often included not just other scientists, but undergraduate students, graduate students from other schools and a coterie of friends and family, all eager to learn from Pasachoff.

“He had this rare quality of wanting to see all his students get to where they want to be, and then did everything he could to help them get there,” said Amy Steele, a postgraduate student in astronomy at McGill University who studied with Pasachoff at Williams and went on three expeditions with him.

He wrote several high school and college textbooks, an updated edition of the Peterson “Field Guide to the Stars and Planets” (1999) and, with art historian Roberta J.M. Olson, “Cosmos: The Art and Science of the Universe” (2019).

Pasachoff loved astronomy, and astronomy loved him back: He and his wife are immortalized in the names of a pair of asteroids, 5100 Pasachoff and 68109 Naomipasachoff.

For Williams astronomer with eye for eclipses, journey to Chile finds best seat in the house

LA HIGUERA, CHILE — While millions of people had their eyes trained to the skies in the United States last week to watch Fourth of July fireworks, a small team of astronomers from Williams …

Colleagues of Jay Pasachoff, who died Sunday, remember him as an accomplished scientist, skilled writer and science communicator, and a dedicated educator.