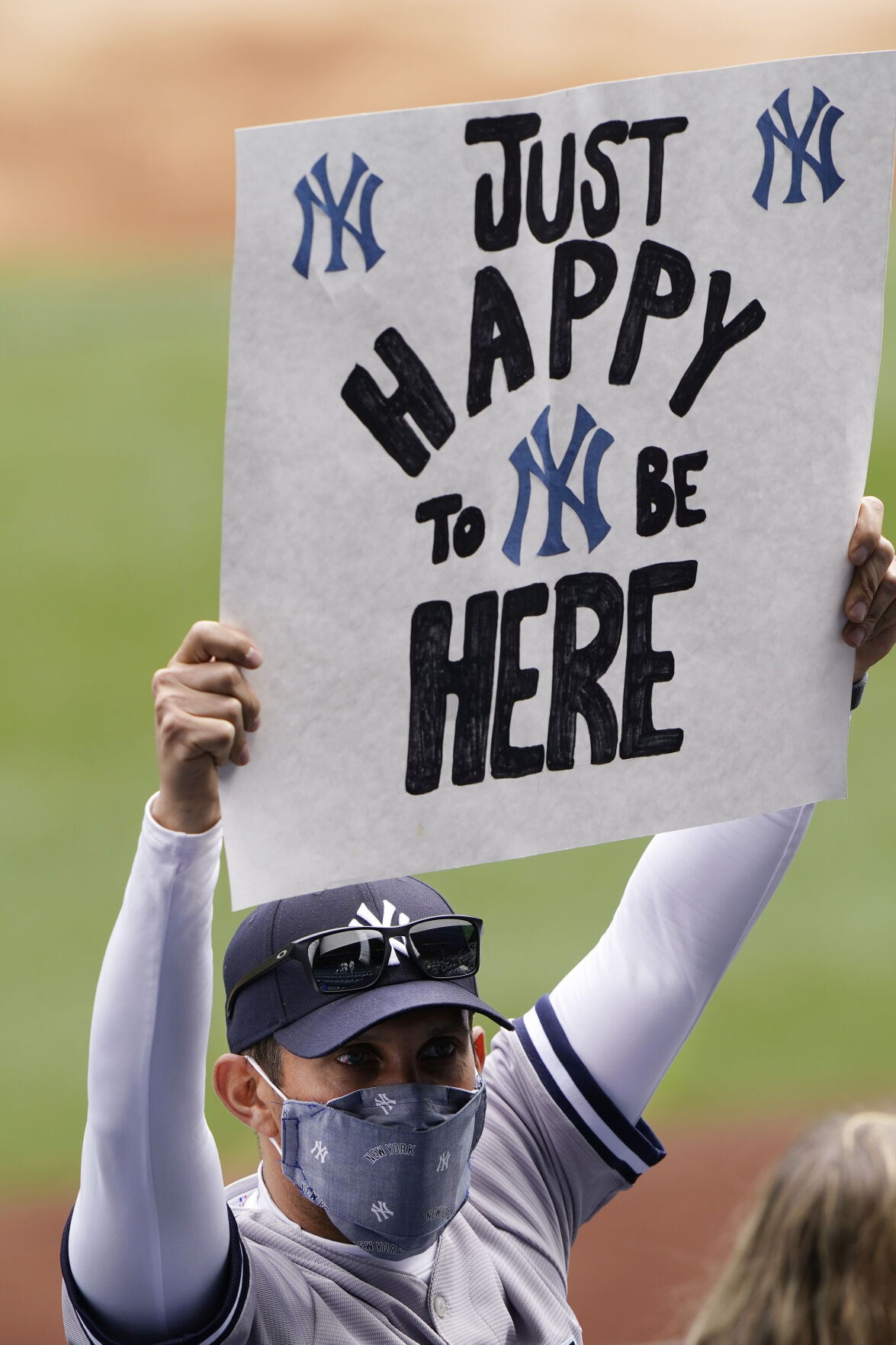 A fan holds a sign expressing his joy at being able to attend a major league baseball game, Thursday in New York. 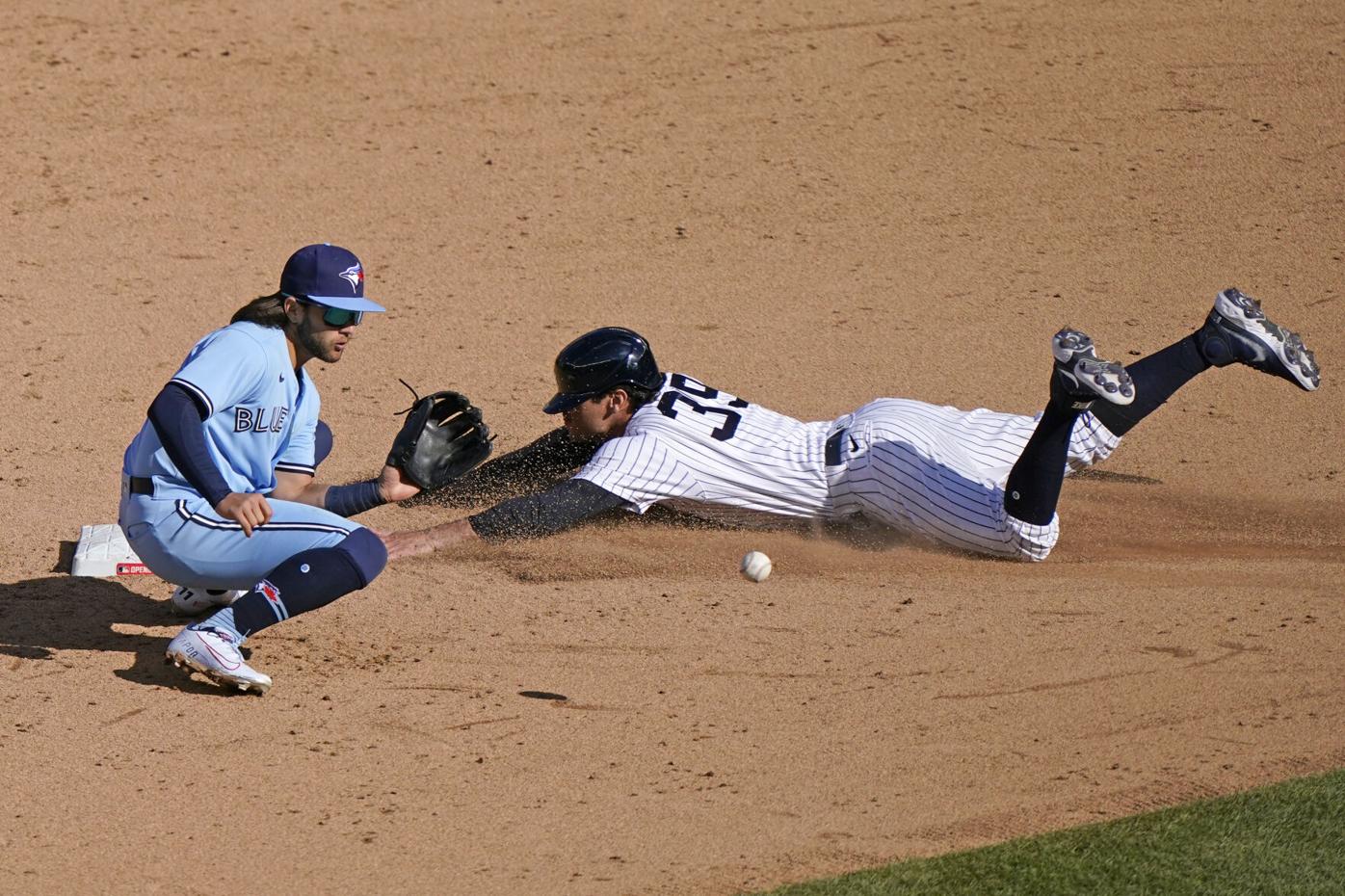 A fan holds a sign expressing his joy at being able to attend a major league baseball game, Thursday in New York.

NEW YORK —Randal Grichuk led off the 10th with an RBI double, and the Toronto Blue Jays took advantage of the second year of starting extra innings with a runner on second to beat the New York Yankees 3-2 Thursday in the major league opener.

Fans returned to Yankee Stadium for the first time since 2019. Capacity was limited to 20% because of coronavirus protocols, and the attendance was announced as 10,850.

Jordan Romano (1-0) escaped trouble in the ninth with the help of third baseman Cavan Biggio. After pinch-runner Michael Tauchman stole two bases, he was thrown out at the plate by Biggio trying to score on a grounder by AL batting champion DJ LeMahieu. Romano then struck out Aaron Judge to strand two runners.

Nick Nelson (0-1) relieved to begin the 10th and with pinch-runner Jonathan Davis on second, Grichuk lined his second pitch over Judge in right.

Julian Merryweather struck out Aaron Hicks, Giancarlo Stanton and Gleyber Torres on 11 pitches for the save.

Teoscar Hernández hit a tying homer in the sixth off Gerrit Cole as Toronto improved to 23-22 in openers.

New York lost for the first time in four openers under manager Aaron Boone. The Yankees had not played an extra-inning opener since 1987.

Fans were at Yankee Stadium for the first time in 532 days since the loss to Houston in Game 5 of the AL Championship Series on Oct, 18, 2019. They had to show proof of complete vaccination at least two weeks earlier of a recent negative COVID-19 test. Masks were required and groups of fans separated by empty seats into pods.

CHICAGO — Wearing a Chicago Cubs jacket and hat, Marc Passoni took in the moment. His buddy, Greg Cooper, stood nearby on his 59th birthday, holding an orange sign that read “First Masked Game 4-1-21.”

It was windy and cold at Wrigley Field, and neither of them cared all that much. They were home.

“It’s life-changing,” said Passoni, 40, of Springfield. “After the year we just had, not being able to touch our family, go to church, do anything, this is like church to me, baby. We’re home and we’re going forward.”

It was much warmer than that, actually — a toasty 36 as the Cubs hosted Pittsburgh on Thursday.

Opening day marked the return of fans to ballparks across the country after they were shut out last season because of the coronavirus pandemic. While there were small crowds for last year’s NL Championship Series and World Series in Arlington, Texas, the cathedrals of the sport were mostly empty all summer long.

Not on this day, though. These openers were all about crowds at Wrigley and Yankee Stadium. About the cheers in snowy Detroit, Cincinnati and Milwaukee.

“It’s great being back to the park,” said Fred Grant, 64, of Canton, Michigan, at Comerica Park as Detroit played Cleveland.

“It is a little cold. This has not got the feel of an opening day. It feels more like the Tigers when they lost a hundred games, with 8,000 fans here. But it’s great to be back,” he said.

Bundled up, Grant wasn’t in his seat in middle innings. He was watching the game from up on the concourse level, where there was a bit of sun.

Limited capacities were the norm everywhere but Texas, which was allowed to fill 100% of Globe Life Field. But there were actual real fans everywhere, none of the piped-in crowd noise from last year.

“I’m a season-ticket holder, so I was just aching to get to a game and get out of the house,” Aaron Wilberding, 38, said as he arrived at Milwaukee’s American Family Field for the Twins-Brewers matchup.

“Watching it on TV is one thing, but being able to come to a game was just the one thing we were just looking forward to the most. We were walking up and it was kind of surreal, that it was finally happening we were actually here,” he said.

Fans and players were greeted by wicked weather in much of the nation. The Orioles-Red Sox game at Fenway Park in Boston was postponed because of wet, cold conditions.

But no one was doing much complaining, not compared to the situation a year ago.

“Without fans, we don’t have a game. It’s super important to our country to have fans be back in the stands to be able to buy tickets and hot dogs and cheer on their team,” Colorado outfielder Charlie Blackmon said Wednesday. “That’s the essence of baseball. It’s awesome where we’re at compared to where we were last year. I look forward to what it’s going to look like mid-summer.”

In the Bronx, where the gametime temperature for the Yankees’ game against the Blue Jays was 43 degrees, some fans entered the stadium with navy Yankees blankets that were still wrapped in plastic.

A reduced group of Bleacher Creatures shouted the Roll Call from the right-field seats in the top of the first, and first baseman Jay Bruce raised his right arm in in a spirited response.

In Seattle, fans will be allowed back at a professional sporting event in the state of Washington for the first time since March 7, 2020, when the Seattle Sounders played the Columbus Crew in an MLS match. The Mariners, Sounders and Seattle Seahawks completed the 2020 seasons without fans in attendance. Only a couple hundred fans were allowed at college basketball games in the state beginning in February, and those were largely limited to family and close friends.

The Mariners were permitted 9,000 fans at T-Mobile Park for the start of the season and quickly sold out the opening series with San Francisco. The team hopes as vaccination rollout continues there will be increases in allowed attendance numbers.

“I often said last year that when you went out during batting practice, it was kind of normal,” Mariners manager Scott Servais said. “But as you walked out for the game to start and the national anthem was played and looked around, there’s nobody there. It just didn’t feel right. It just didn’t have that same electricity in the ballpark. I missed it. I know the players missed it.”