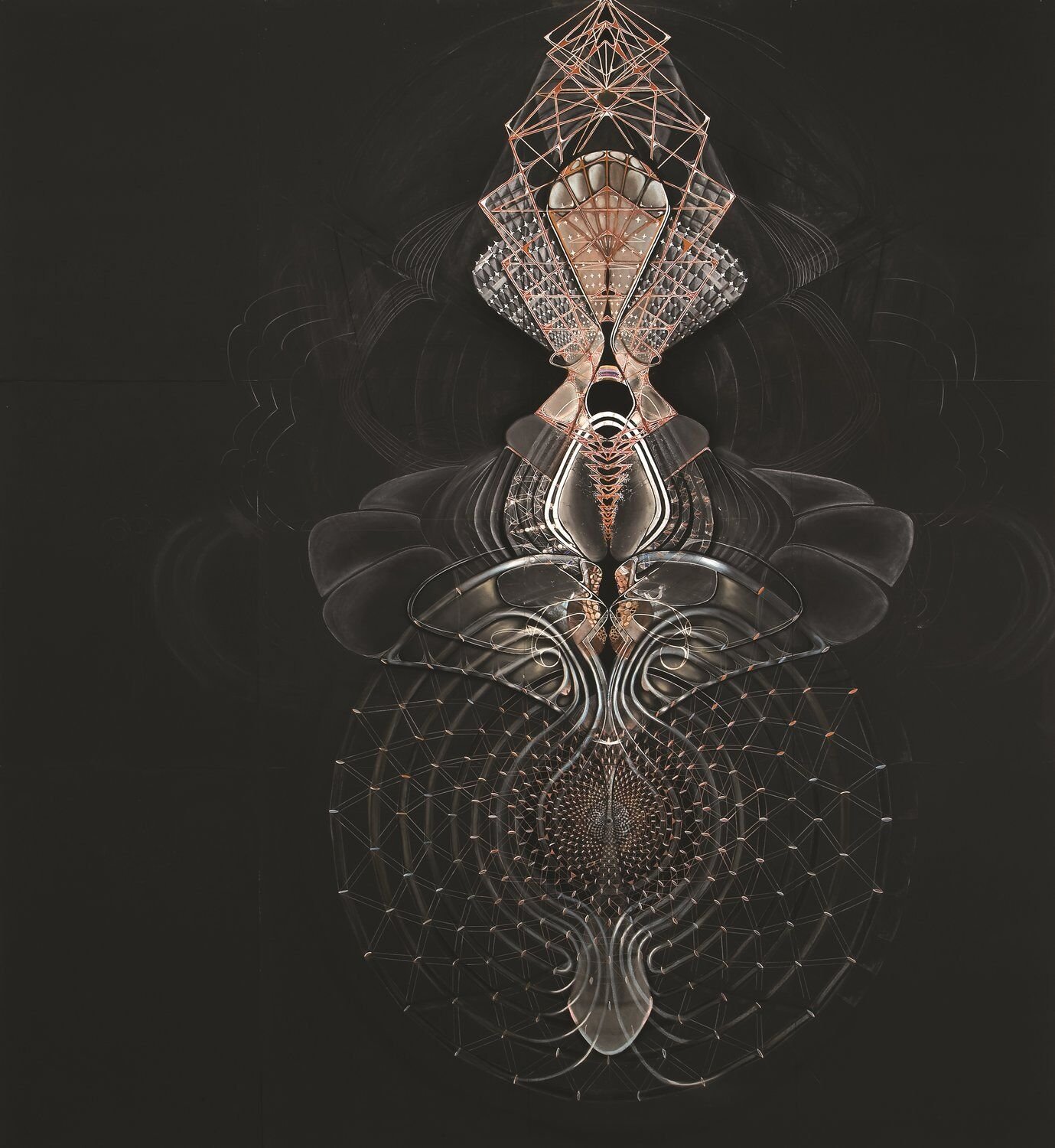 The intricate, complex drawings use layers of graphite, gouache, pastel and conte on paper. 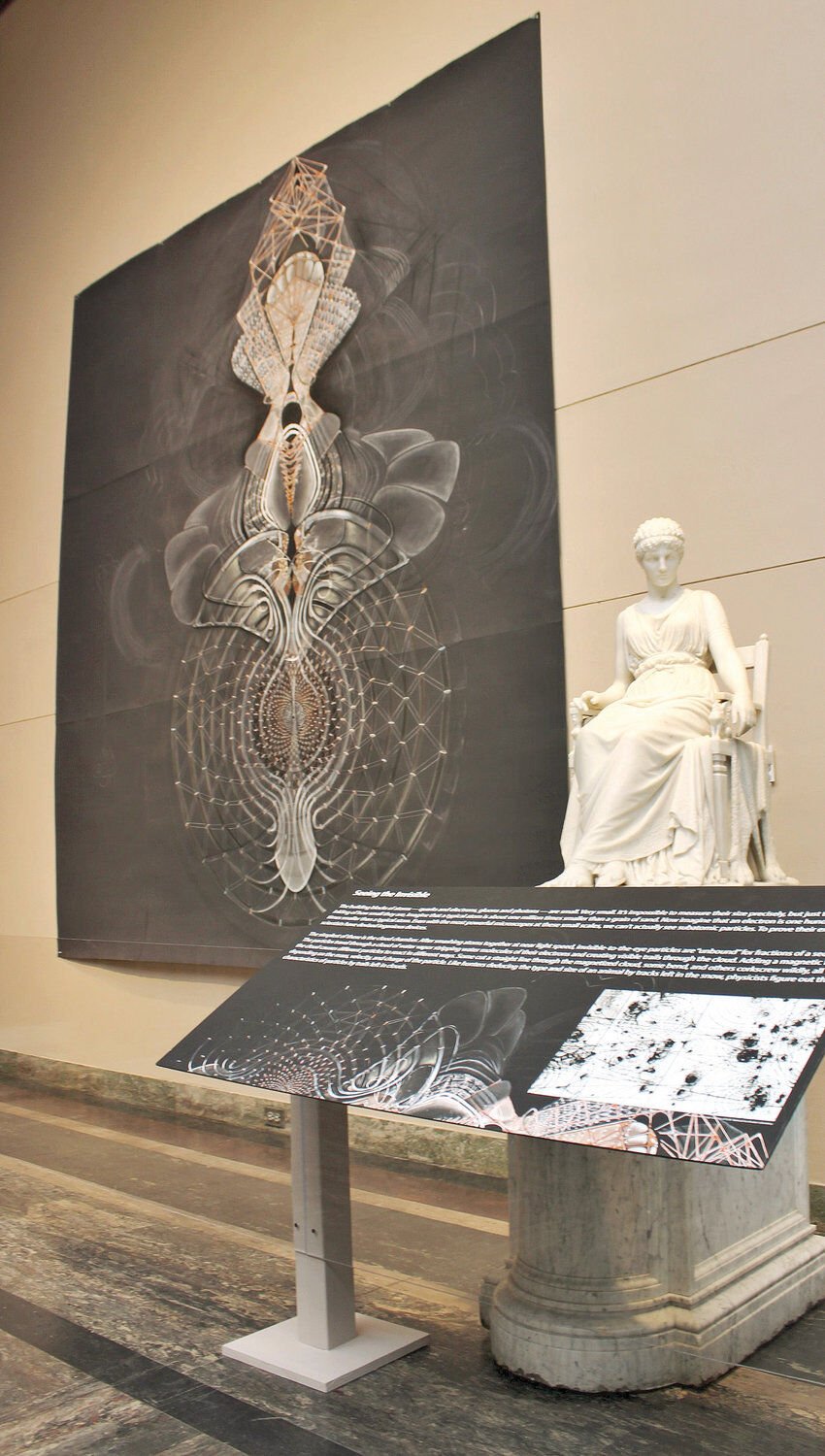 The work, according to artist Amy Myers, is her exploration in finding answers to "explain the universe." 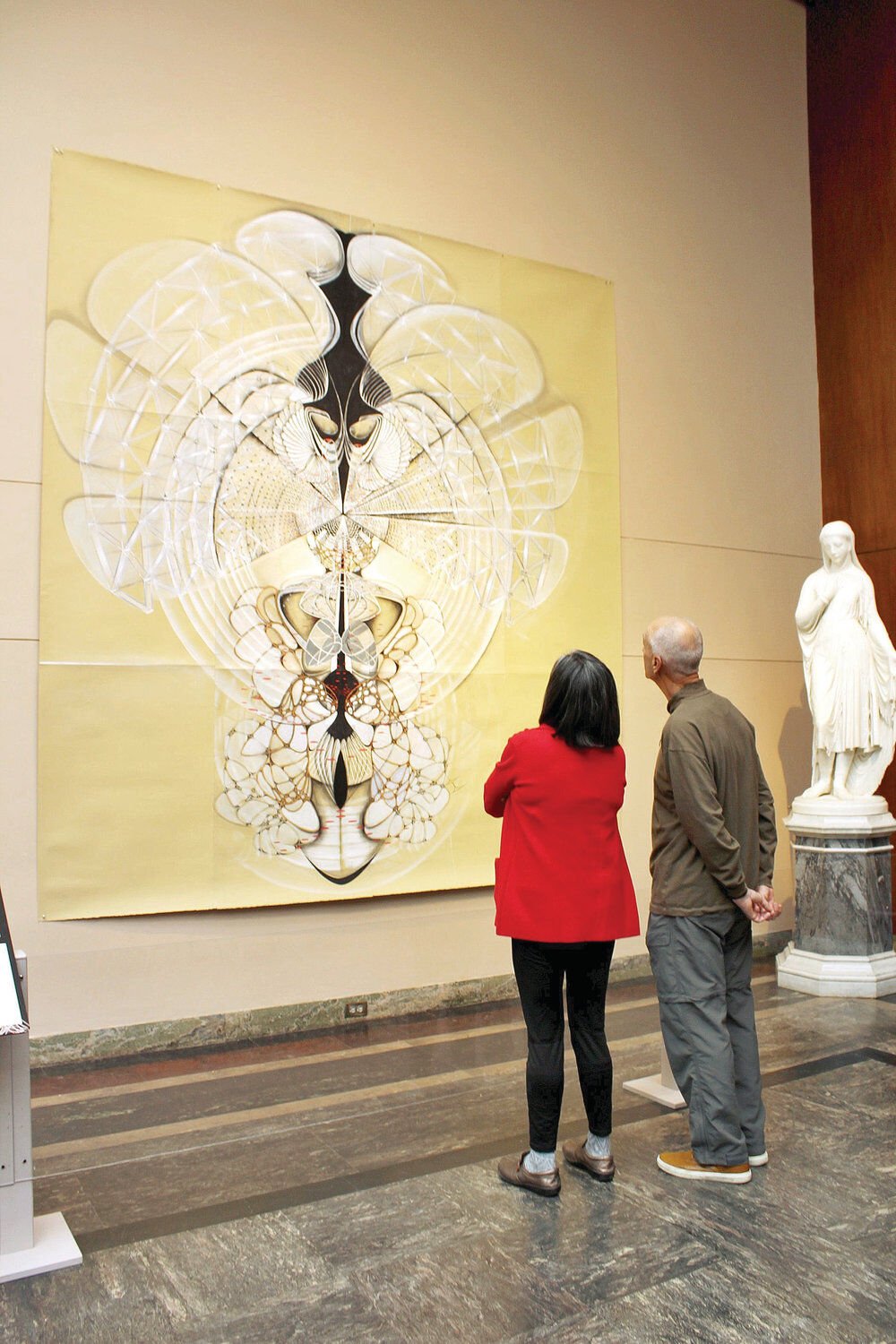 Amy Myers' "Opera Inside the Atom" is four large scale drawings that are currently on display at the Berkshire Museum.

The intricate, complex drawings use layers of graphite, gouache, pastel and conte on paper.

The work, according to artist Amy Myers, is her exploration in finding answers to "explain the universe."

Amy Myers' "Opera Inside the Atom" is four large scale drawings that are currently on display at the Berkshire Museum.

Amy Myers' first venture into art was "an accident."

"I had to take a watercolor class at UT Austin, and then all of a sudden, I had this epiphany that I just knew I was going to go into art and that it would be my whole life," she said.

That's why her new exhibit at the Berkshire Museum, "The Opera Inside the Atom, Large-Scale Drawings 2007-2008," is just one of many chapters in a lifelong research project to "explain the universe." Using lines and forms based on fundamental observations in physics, Myers' four large drawings represent her "conceptual playground," communicated in a "visual language [that] has been percolating [her] entire life."

"It was almost like a contradiction, where the more I got to the bottom of my questions, the more it expands, so it's really something [with] no end," she said. "It's just this contextual, ever-evolving inquiry."

For Myers, "Opera Inside the Atom" is a study of "what holds a nucleus together, the four different forces that guide an atom, and all of that complexity," she said. "In an opera, you can have 15-plus voices simultaneously, but yet, you can experience it as a clear totality. That's what I was thinking about — this complexity experienced as harmony."

The daughter of a particle physicist, Myers grew up combing through the pictures of her father's books on quantum mechanics, developing a curiosity of the world that eventually led her to pursue the intersections of physics and art.

"[The topics were] interesting, and it kind of captured my imagination. [My father] was always asking us questions like, 'What do you think?' and I guess I would take those questions seriously and try to answer them," she recalled. "So, in a lot of ways, [my art] has come out of a fascination with the theoretical world."

Myers' curiosity produces a steady barrage of inquiries that motivate her drawings. Often times, her pursuit for knowledge takes a life of its own — in this case, four drawings as large as 10-by 11-feet using layers of graphite, gouache, pastel and conte on paper.

Just as the drawings' dizzying array of rotations and structures invite exploration at the subatomic level, the patinaed grids of paper underneath and the push pins at the corners hint at their human origins in Myers' studio in New York City.

"I feel like I'm drawing a line between invulnerability and vulnerability because, ultimately, the artist's hand is revealed," she said.

And in the process of mapping out a subatomic model, she experiences a certain tactile connection to her theories. "My face is just inches away from the paper. My hands are on it, and I touch it thousands of times. There's this real tangible intimacy and for me, there's an eroticism in that."

Her exhibit, on view until Sept. 8, complements the interdisciplinary approach of Berkshire Museum and its neighboring display, "Leonardo Da Vinci: Machines in Motion," according to Chief Experience Officer Craig Langlois.

"When you walk into the museum, you have multiple experiences that have a loose relationship with one another," Langlois said. "You have someone like Da Vinci, who is dealing with the physical realm with the limitations of his society and time and you come here and you have someone like Amy who's pushing that science even further. But the goals purportedly for us are very much like, '50 percent of your experience is going to happen in this building.' What we want a visitor to do is create the other 50 percent."

Myers remembers artist James Turrell's commencement speech when she graduated from the Art Institute of Chicago in 1999.

"The last thing he said when he was on the podium was: 'And remember, the blossom is for the plant,'" she recalled. "So, on some level, I make the work to inspire myself and there's a residue of it to inspire other people to whatever it is they are interested in.

"The world comes alive when we engage with it," she said. "This is just a springboard."