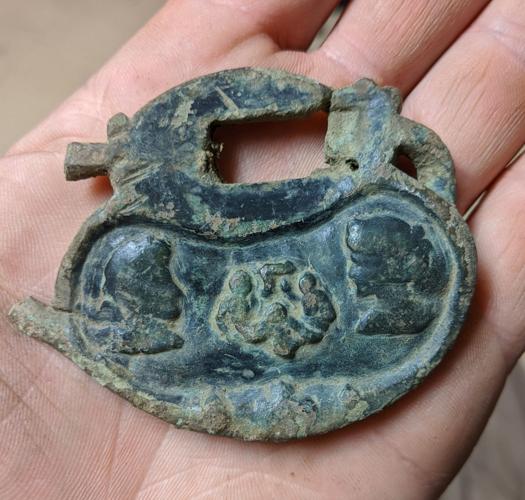 A sword guard dating to 1689 that was found at an 18th-century homesite near Pittsfield. 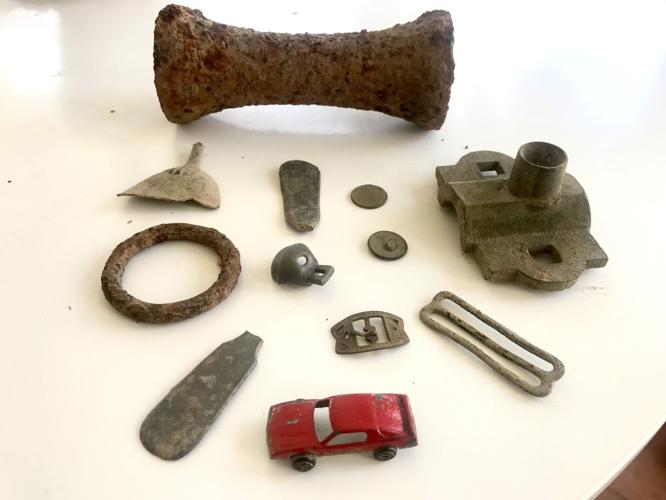 A metal detector helped to locate and unearth an array of artifacts on the author's property in Ghent, N.Y.

GHENT, N.Y. — A couple of weeks ago, Max Cane, a historian who lives in nearby Malden Bridge, walked up our driveway — a long driveway — introduced himself and produced a strange-looking map on his phone made by low-flying aircraft employing laser technology.

It’s able to see through the trees to the forest floor below. Based upon the map, Max detected what he thought was a building foundation buried in our woods. He suspected it dated from the 18th century and asked permission to explore. After putting aside my innate suspicion of strangers, especially in these fraught times, I told him to go ahead.

A couple of hours later, a message arrived: “I had to head out but the good news is that it’s definitely the site of an old homestead! I found numerous iron pieces as well as some ceramic fragments and clothing buttons. The relative date ranges of each suggest that the house was abandoned prior to 1840 and perhaps even earlier.”

The place didn’t look like much when Max took me there the following day — an overgrown peninsula of land in the middle of a wetland. But, that didn’t matter much. It’s value, from my point of view, was the way it sparked the imagination. Somebody whose identity is lost to time lived there from the late 18th to the early 19th century.

I would never have found the place on my own, let alone any of the artifacts that Max unearthed with the help of his metal detector. They included a British button marked “Imperial Standard” that helps date the site because, Max informed me, we boycotted British goods after the War of 1812. Also uncovered was a counterfeit pewter 1825 Matron Head cent, which dates the spot even more precisely. It was most likely a game token, common at the time.

Some of Max’s most productive work has occurred in the Berkshires, where he’s located at least 40 homestead sites, many of them dating back to the 1700s. He’s been aided, especially in Williamstown, because the town’s history has been so well documented.

The Berkshires and the Hudson Valley may be neighbors, but Max, 33, often finds objects in one that he doesn’t in the other. Some types of buttons and buckles turn up everywhere. Others seem specific to a region or town. Curiously, he often discovers quahog clamshells in the Hudson Valley but rarely, if ever, in the Berkshires. Max speculates that clams were transported up the Hudson River but didn’t travel well much beyond its banks.

I was so impressed by his first foray on our property that I invited him back the following week. He’s always looking for new sites — he can be reached at Paleomaxx@yahoo.com — not just for the thrill of discovery, but also because the knowledge accrued and the objects he collects helps him develop a richer sense of community life in those times. He lectures and often lends his growing collection to local historical societies.

We walked around our woods but didn’t find much. As a coin collector, I was impressed when Max unearthed a 1918 Lincoln Head Cent where I’d once come across broken, decorated pieces of china. The remnants of a long ago summer picnic, perhaps? The old penny was more impressive to me than it was to Max, who has occasionally found “first contact pieces,” such as Dutch brass kettle points that Native Americans would fashion into spear points and jewelry. One of his more exciting discoveries was a trade ax in Malden Bridge near the Kinderhook Creek. The French used to trade axes for pelts with members of the Oneida nation.

And outside Pittsfield, he exhumed an ornate sword guard made to celebrate the coronation of King William and Queen Mary in 1689. Max speculates that it was owned by someone of wealth and already a family heirloom when it found its way to the late-18th-century homestead where he found it.

Max’s most productive efforts last Saturday afternoon occurred far closer to our house, in fact, on our front lawn. My grandparents bought the place in 1948, but I only know our big red barn through photographs. It burned down before I was born in the early 1950s.

Employing his top-of-the-line metal detector (Max is so versed in its yelps and digital readouts that he can tell the difference between a silver quarter and a composite quarter buried half a foot underground) over half an hour, the historian retrieved a heavy shopping bag worth of rusted farm equipment. They included the remnants of a post-Civil War pocketknife; part of a spoon whose distinctive scallop shell design marked it as manufactured by C. Parker and Co. during the early 1840s; and a heavy piece of tooled brass whose purpose was mysterious.

“Brass was expensive,” Max explained. “You wouldn’t use it unless you needed to use brass. A huge piece of brass like that is unusual to see.”

The earliest deed for the house I’ve been able to find is dated 1850. Gregg Beringer, Ghent’s talented town historian, found an auction notice for the farm from 1851 advertising “a spacious and convenient dwelling house,” and several barns and other buildings. We always suspected the house was built earlier and a couple of metal buttons Max found and dated to the 1820s or early 1830s seemed to confirm that impression.

There was also broken pieces of blacksmith-forged horse tack. But, my favorite find was an early American Crotal bell, also known as a jingle bell.

“By law, you had to have them on your carriage,” Max explained as dusk closed in on us. “People couldn’t hear the carriages coming in the snow.”

Finding artifacts is less luck than a combination of knowledge, experience and common sense. They’re what Max, who has a bachelor’s degree in chemical engineering and a master’s degree in geology and Earth science from Rensselaer Polytechnic Institute, describes as a “statistical event.”

“There’s usually a single spot where the lady would do the hemming,” outdoors because the light was better in a world without electricity. “I usually find multiple thimbles.” Unsurprisingly, clothing buttons can often be found where an outhouse once stood, or rather in the space between the outhouse and the main house.

So, now I have a shopping bag full of what Max described as “typical iron pieces you find around barns,” and the buttons and jingle bell. They currently own pride of place in our Wunderkammer alongside bluebird feathers, ceramic shards and delicate nests. But, I also have enlarged respect for our home and its history.

Most of all, these discoveries breed a sense of humility. Life is ephemeral. One day, hopefully, some future resident will dig up a dropped coin dated 2021 and marvel at how primitive life must have been back then.