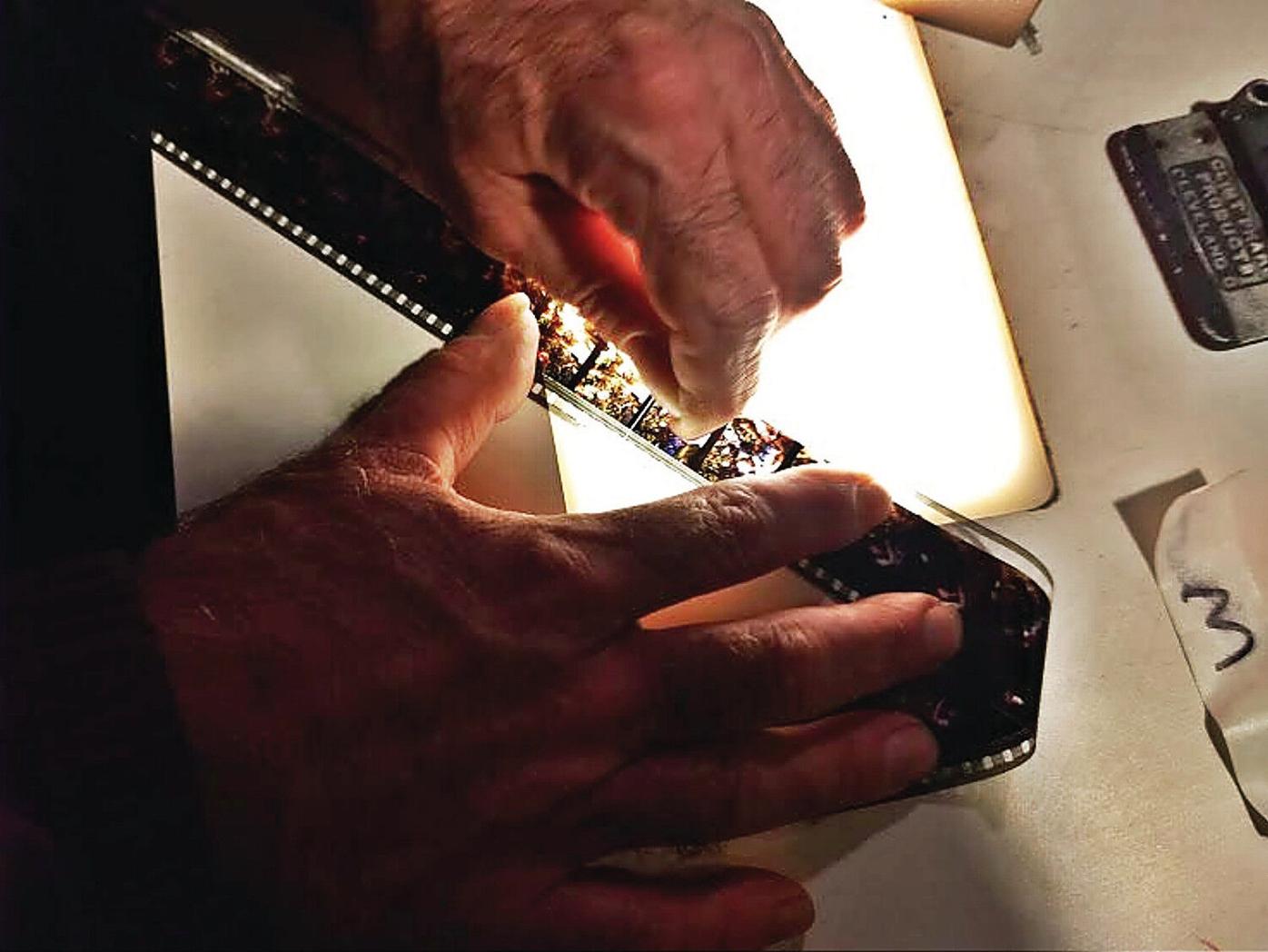 Paul Kakley prepares to disassemble a section of "The Wizard of Oz" after it is shown Saturday at the historic Mahaiwe Performing Arts Center in Great Barrington. The film is then wound back up onto small reels for shipment back to Hollywood. 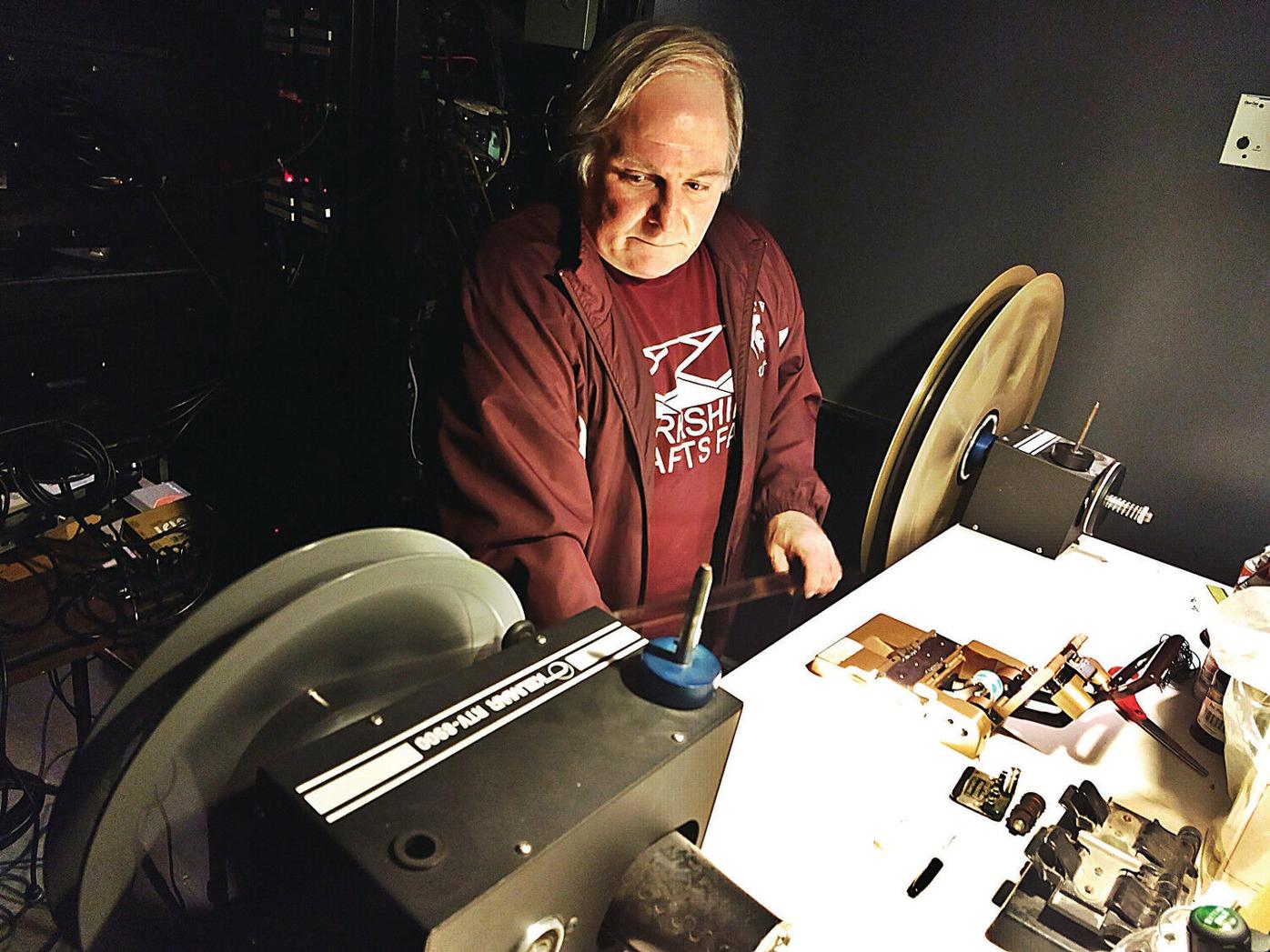 After graduating from Monument Mountain Regional High School, Paul Kakley took a job as the school's audio-visual instructor, a job he still holds. He worked nights and weekends in the projectionist booth at the Mahaiwe Performing Arts Center in Great Barrington beginning in 1976.

Paul Kakley prepares to disassemble a section of "The Wizard of Oz" after it is shown Saturday at the historic Mahaiwe Performing Arts Center in Great Barrington. The film is then wound back up onto small reels for shipment back to Hollywood.

After graduating from Monument Mountain Regional High School, Paul Kakley took a job as the school's audio-visual instructor, a job he still holds. He worked nights and weekends in the projectionist booth at the Mahaiwe Performing Arts Center in Great Barrington beginning in 1976.

When Paul Kakley got word of their arrival, he went to inspect, as he does each year.

At a workbench in the projectionist booth high above the historic Mahaiwe Performing Arts Center, he pulled the contents out of their cases. Holding the film to the light, detecting neither scratch nor nick, Kakley thought to himself, "Gorgeous, just gorgeous."

Each year, on the Saturday after Thanksgiving, moviegoers pack into the Mahaiwe for a seminal event. The lights dim, the red curtain rises and a shaft of light cuts through the dusty air carrying with it the story of a girl named Dorothy and her dog named Toto on an expedition from the black-and-white flats of Kansas to the Technicolor outland of Oz — and then back again. High up in the booth in back, spying through the porthole, is Kakley, just as he was the year before and the year before that, dating back decades to when the Mahaiwe was mostly a movie house and projectionists were the last link in Hollywood's creative chain.

He's the man first responsible for making "The Wizard of Oz" an annual mainstay here, shown as it was intended, from the mortal coil of 35 mm motion picture reels.

Hollywood doesn't print films anymore in 35 mm, the medium of choice for filmmakers for more than 100 years, up until about a decade ago. Once those prints are gone, they're gone, which is why when Kakley declares the film sent from Warner Bros. "gorgeous;" it's a big deal to analog purists like himself, among the last ones standing in the citadel of celluloid orthodoxy.

Most all Hollywood films are shot in digital nowadays. Most all movie houses have shoved aside their old mechanical projectors and replaced them with their digital counterparts — souped-up computers that play files, not films.

That means no more projectionists — and all their idiosyncratic undertakings — except on rare occasions, like at the Mahaiwe, once a year with "The Wizard of Oz." Each year, up in that booth, the old rituals are rendered anew in the hands of Kakley.

The first step is taking the five reels sent by Warner Bros. and "building" them into two monster reels — each one to be laced into Mahaiwe's two projectors. That all requires a little surgery: attaching one strand of film to the next with Mylar tape and splicing film between frames with a mini guillotine under lamplight. It also means setting the changeover cues — those small white circles you sometimes see on the upper right-hand corner of the screen — to mark when one reel is spilling empty and the next reel must be set into motion. Kakley must keep watch midfilm for those changeover cues so he knows when to make the perilous switch from one projector to the next.

Indeed, just like in Oz with that man behind the curtain, it's best to pay attention to that man up in that booth.

"Every year it becomes more rare that we are able to get a 35 millimeter print," says Kakley, about a half-hour before showtime Saturday. "This year is no exception."

In 1980, upon the Mahaiwe's 75th anniversary, the larger-than-life, mustachioed, card-playing, Jackie Gleason look-alike former manager, the late Al Schwartz, invited the staff to each pick a movie they'd like to see. Schwartz promised he would find it and screen it.

Kakley, one of Schwartz's staff projectionists, chose a film dating to 1939, "The Wizard of Oz," whose sound and Technicolor were state of the art in the day and remained legendary decades later.

"I watched every year growing up when they would show it on TV, but I had never seen it the way it was meant to be seen," Kakley says.

It was a huge hit at the Mahaiwe in 1980. Soon after, it became an annual event.

Kakley has been a Mahaiwe mainstay since 1970, after the death of his father, who was killed by a drunken driver. He was 13, and his mother moved her family from Springfield back to her hometown of Great Barrington. The Mahaiwe, with its heroes — on screen and in the front office — became like a second home for him.

After graduating from Monument Mountain Regional High School, Kakley took a job as the school's audio-visual instructor, a job he still holds. He worked nights and weekends in the projectionist booth beginning in 1976.

Peering through the window from the booth Saturday, Kakley watches as the theater fills up. The two big, steel projectors that he and Schwartz hunted down and procured together years ago (built by Century, "like brick houses, but so gentle on film," Kakley says) are locked and loaded with a combined 9,180 linear feet of gorgeous Hollywood magic, shot with a gargantuan camera now parked in the Smithsonian.

At 4:05 p.m., the house lights dim. The curtain rises. Kakley presses a green button. The lamp is lit, the projector whirs and the reels heave into motion. Upon the silver screen below, Dorothy is soon getting spirited away by a tornado to somewhere over the rainbow.

Kakley steps out of the booth and takes a moment to soak it all in from the back row.

"I mean, that's a beautiful picture," he whispers. "It's rock steady. Look how crisp it is."

He is back in the booth for the changeover, just when Dorothy, Scarecrow, Tin Man and the Cowardly Lion enter Emerald City. From the appearance of those first white cues, Kakley has half a second to react and press the button that brings the second projector to life. If he has aligned the film properly — which, of course, he has — in eight seconds the changeover will seamlessly occur, which it does.

Kakley peers through the porthole once again at the goings-on of that girl, her dog and her three strange, new friends. She just wants to get back to Kansas. She's clicking those ruby slippers now because there's no place like home, no place like home.

Felix Carroll is The Eagle's community correspondent. He can be reached at fcarroll@berkshireeagle.com.