How close do Secret Service bodyguards become to the presidents they are protecting? Many have wondered in the wake of discarded text messages from the Jan. 6, 2021, mob invasion of the U.S. Capitol.

Security agents can become at least casual friends, we learn from one local man who worked details for six chief executives from 1913 to 1953. He was Frank J. Murray, a North Adams native.

This story begins in 1950, when Puerto Rican nationalists on Nov. 1 charged the grounds of Blair House, temporary quarters for President Harry S. Truman and his family while renovations were being made on the White House. The attackers killed a White House police officer; a Secret Service agent killed one of the invaders.

A North Adams Transcript reporter found a local angle, noting Secret Service Agent Murray was from North Adams. None of the Murray families in the city claimed to be a relative, though.

The Transcript story appeared Nov. 6, and was noticed by Blanche (Mrs. James F.) Horn (d. 1951) of East Main Street, who advised the newspaper that Agent Murray was her brother and “is one of President Truman’s closest companions, and as such has travelled all over the country with the chief executive.”

Bernard A. Drew: When the big guys played ball in 1870

Murray was senior driver of the presidential automobile, and also responsible for determining travel routes and arranging for municipal and state police protection, and for hotel and other transportation reservations.

The North Adams Transcript story appeared Nov. 6, 1950, and was noticed by Blanche Horn of East Main Street, who advised the newspaper that Agent Frank Murray was her brother and “is one of President Truman’s closest companions."

He had a challenging time in 1947 when Eleanor Roosevelt and son Elliott and children and 13-member entourage, returning from Campobello, New Brunswick, needed to overnight in Portland, Maine. Murray had to book them the Lafayette Hotel, as the previous year’s accommodation wouldn’t let the dog Fala stay, according to a Boston Globe story.

Turns out Murray’s name didn’t show up in local records because he was born Francis J. Morand, son of carpenter Alphonse (1859-1952), a native of Canada, and Hedgwidge “Agnes” (Roy or King) (d. 1941) Morand. The father was still alive in 1950, living with Mrs. Horn. She explained in a follow-up Transcript story Nov. 7 that when she and Frank were young, they “somehow decided” to change their last name to Murray.

“We were just kids and didn’t realize the complications that might arise by taking on a new name just because it sounded good,” Horn said. But they persevered. Other siblings kept the name Morand or, in one case, dropped the “d.”

Frank attended Notre Dame parochial school. He bell-hopped at the Berkshire Hotel and the Richmond Hotel. After a stint at Arnold Print Works, he moved to Bridgeport, Conn., to work for an auto parts manufacturer. From there he obtained a position in the White House garage, “where he now is supervisor of vehicles maintenance as well as serving as senior driver and personal bodyguard of the President,” according to the Transcript story. Murray, Horn said, was in no danger during the Blair House episode, having not been on call.

Murray’s name came to wide attention in November 1948 when The Associated Press circulated a photo of him holding an umbrella over Truman as the two walked at the Washington National Airport to meet Secretary George C. Marshall, who was returning from a foreign mission.

Frank Murray’s name came to wide attention in November 1948 when The Associated Press circulated a photo of him holding an umbrella over President Harry S. Truman as the two walked at the Washington National Airport.

U.S. presidents didn’t always have bodyguards. President Theodore Roosevelt (in office 1901-1909) established the agency, a unit of the Treasury Department. A short time after, Roosevelt was bruised, his liveryman injured, other riders scuffed up when his horse-drawn landau collided with a Berkshire Street Railway car racing from Pittsfield to Lenox to beat the D.C. entourage. Roosevelt had been visiting Gov. Winthrop Murray Crane in Dalton. Secret Service Officer William Craig was killed — the first of the new service to perish in the line of duty.

The first presidential limousines were a White steamer and Pierce-Arrow Brougham, both 1909 models, followed over the years by a 1912 Baker Electric, a 1916 Cadillac, a 1919 Pierce-Arrow and a 1921 Packard. Murray became official driver during President Woodrow Wilson’s administration. He would have handled the 1928 and 1932 Cadillacs and later two 1938 Cadillac V-16s, nicknamed “Queen Mary” and “Queen Elizabeth” by FDR. They cost $20,000 each. In 1939, a $30,000 Lincoln, “Sunshine Special,” joined the fleet followed by a 1942 Lincoln Custom.

Bernard A. Drew: The puzzling 'Keith' on an 1893 topographical map

Entering the garage in 1950 was a bullet- and bomb-proof Lincoln Cosmopolitan seven-passenger, 145-inch-wheelbase behemoth with a 12-cylinder engine. It had special running boards for guards as well as hydraulically operated windows and an intercom between the chauffeur and the passengers. It had a top speed of 100 mph. It was the first armored vehicle in the garage.

Frank Murray demonstrated some of the car’s features to the press in March 1950.

I couldn’t trace the agent’s later years through electronic resources. He and his wife lived in Alexandria, Va. They had no children. One likely Frank J. Murray I did find was 96 years old in 1984. Was he the one? It remains a secret. 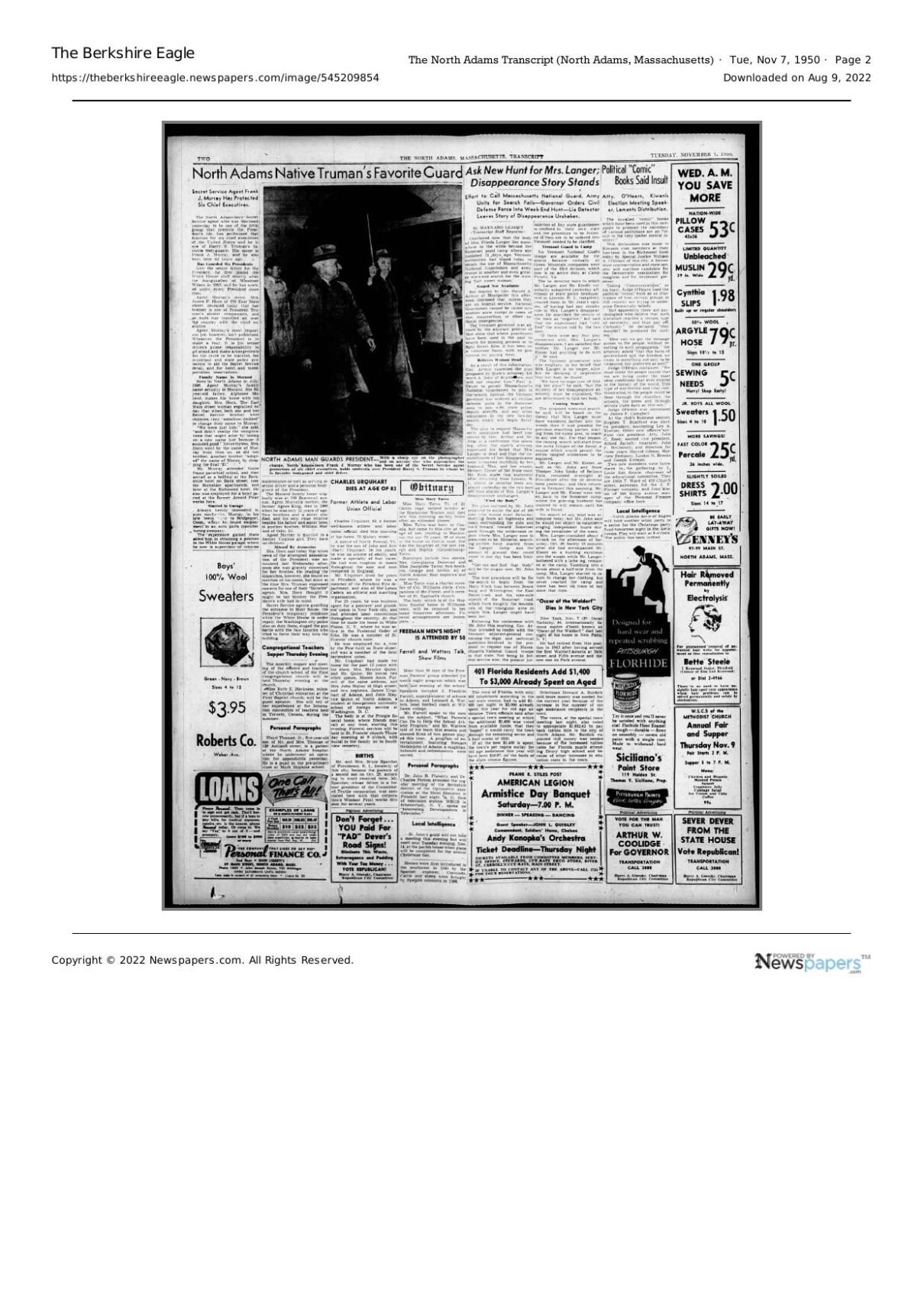 Bernard A. Drew is a regular Eagle contributor.