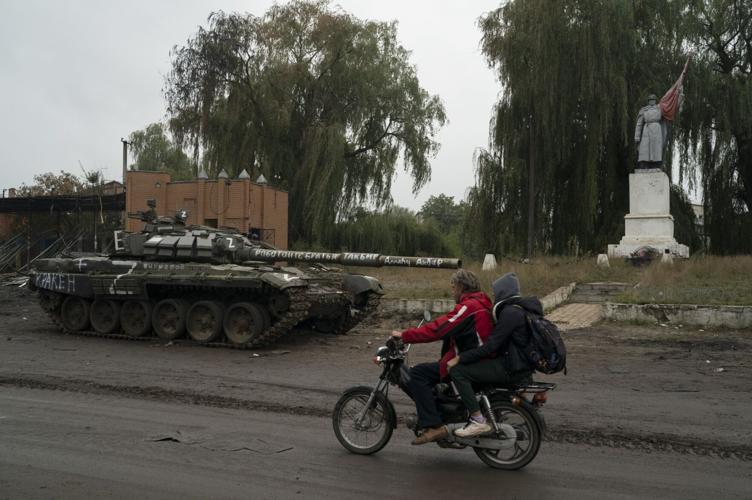 A motorcyclist on Wednesday drives through the recaptured area of Izium, Ukraine, past an abandoned Russian tank with the letter Z on it, which has become the Russian emblem for the war. 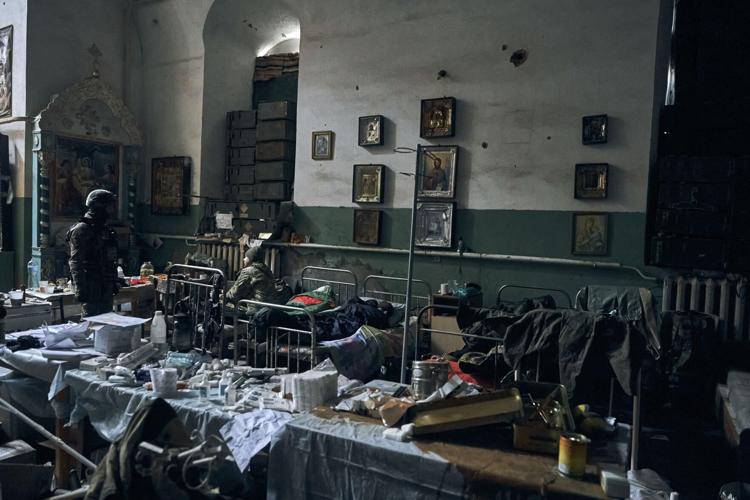 Modernizing a recurring theme of 20th-century military history, Ukraine has an inaugurated toll-free surrender line for Russian soldiers and units.

In recent decades, many Westerners came to see the Russian fighting man as a superman.

Hollywood produced Dolph Lundgren as the “Red Scorpion.” Undeterred by the collapse of the Soviet Union, the Kremlin mounted Victory Day parades every year on Red Square. As a journalist in Moscow, I covered eight of these events. Putin’s press advisers always made sure that foreign reporters got good camera angles of the tanks, bombers and ICBMs. In the field, Western embassy military attaches got VIP treatment at Russian military training exercises.

But Russia’s historical record has not always been so heroic.

In World War I, 3.3 million Czarist Russia soldiers raised their hands and surrendered.

In World War II, 5.7 million Red Army soldiers surrendered. Surrenders were so widespread that Joseph Stalin issued the “not one step back” order. Political police were stationed behind front-line troops with orders to shoot anyone who retreated.

This month, flight and surrender were the hallmarks of Russia’s debacle in northeastern Ukraine. In two weeks, Russia lost 3,500 square miles of occupied land — almost four times the size of Berkshire County.

Thousands of Russian soldiers scampered back across the border. They left lunches on tables. They stole civilian clothes and cars. At Stanytsia Luhansk, a checkpoint into Russia-controlled Ukraine, a line of cars reportedly stretched for five miles.

Igor Girkin, a Russian military blogger and former intelligence colonel with half a million followers on Telegram, bitterly compared the Kharkiv defeat to the Battle of Mukden in Manchuria. This was Czarist Russia’s turning point in the 1905 Russo-Japanese War. Girkin did not mention that in two weeks 22,000 Russian soldiers surrendered — compared to 2,000 Japanese.

Today, the difference is between a serf army and a citizen army.

Ukrainian soldiers are overwhelmingly volunteers. They are fighting to defend their land, their families and their properties from a foreign invader.

In contrast, Russia increasingly scrapes the bottom of the barrel to fill its ranks. To date, the U.S. government estimates total Russian casualties at 80,000 soldiers killed or wounded.

From day one, the Kremlin has seen its elite units chewed up.

Russia increasingly relies on draftees and recruits from such impoverished peripheral regions as Altai, Buryatia, Dagestan, North Ossetia and Tuva. For contract soldiers, pay can be three to four times the local averages. In Sakhalin, the island in the Russian Far East, the signing bonus is $5,000 — the equivalent of one year’s pay.

Yevgeny Prigozhin, a close ally of Vladimir Putin, is reportedly seeking to recruit prisoners with the offer of high pay and get-out-of-jail-free cards. But word of high mortality rates in Ukraine is filtering into the prisoners, and only 5,000 Russian prisoners have signed up.

Desperate to meet quotas, the army in one city targets alcoholics, Igor Eidman writes. In his home town of Nizhny Novgorod, recruiting posters for contract soldiers are placed around stores that sell “samogon” — cheap moonshine.

From Russia-occupied Donbas, there are reports of men hiding in apartments for months at a time and of waiters pressganged straight from restaurants into military service. Last week in Kharkiv, many of these soldiers cut and run. Back in the “Luhansk People’s Republic,” these draftees complained that their Russian officers had abandoned them. Photos this week purported to show street protests against calls to return to battle.

On Russia’s state-controlled TV, commentators say that Putin faces a choice: a national emergency draft or peace talks with Ukraine.

After losing the Crimean War in 1856, Czar Alexander II adopted modernizing reforms, including the emancipation of serfs — essentially slaves. In 1905, defeat in the Russo-Japanese War forced Czar Nicholas II to create the Duma, modern Russia’s first parliament. After heavy battlefield losses in World War I, Czar Nicholas was overthrown in February 1917. After eight months of more losses, his successor, Alexander Kerensky was overthrown by the Bolsheviks.

Joseph Stalin survived World War II by winning. Mikhail Gorbachev lost the Cold War and lost power. Putin knows that if he loses his war in Ukraine, his head will be on the block.

Cracks are showing around Putin’s empire and sphere of influence. Last spring, Putin pulled most of his troops from Syria. Last week, fighting broke out again between Azerbaijan and Armenia, two former Soviet republics where Moscow has long served as the umpire. The latest death toll is 176. Sensing weakness in Moscow, Georgia is considering a referendum about retaking Russia-occupied territories.

In Central Asia, an area long treated by Moscow as its backyard, Chinese President Xi Jinping visited Kazakhstan on Tuesday. Speaking from the largest of the five former Soviet republics in the region, he bluntly warned Moscow: “We will resolutely support Kazakhstan in the defense of its independence, sovereignty and territorial integrity.” Last summer, Kazakh President Kassym-Jomart Tokayev publicly refused to support Putin’s invasion of Ukraine. Kremlin-controlled TV responded by noting that northern Kazakhstan historically was Russian land — and Kazakhstan could be “next.”

To the west, Sweden and Finland are on track to join NATO. This would end almost eight decades of careful neutrality. Estonia and Finland already are planning military cooperation.

This would turn the Baltic Sea into a NATO lake, thwarting Russian ambitions since Peter the Great to have unfettered access to the world from St. Petersburg.

In the wake of the Russian Army collapse in Kharkiv region, two American analysts planted the idea this week that the world should start thinking about a post-Putin Russia. Anne Applebaum wrote a forward-looking piece in the Atlantic titled “It’s time to prepare for a Ukrainian victory.” Janusz Bugajski, a Polish-American political scientist, forecasts a future unraveling of Russia in an Atlantic Council essay: “Russia may not survive Putin’s disastrous decision to invade Ukraine.”

In Washington on Wednesday, Ilya Ponomarev, an exiled Russia Duma member, talked to reporters about the National Republican Army, a Russia-based urban guerrilla group, and the Freedom of Russia Legion, a Ukraine-based battalion of Russian emigres and former prisoners of war.

“The attacks are now happening at the rate of one a day, across Russia,” Ponomarev told me in a telephone interview about Republican Army attacks, largely fire bombings of military draft offices. “Membership in both organizations right now are in the hundreds. The queue of the people who want to join are in the thousands — the security background checks are holding things up.”

In Ukraine, Russian surrenders and desertions are expected to grow. In Kherson, Russia’s only foothold on the west bank of the Dnipro River, about 25,000 Russian soldiers are trapped in a steadily tightening Ukrainian Army noose.

With their backs to the river and winter coming, Russian soldiers know that Putin is taking a page from Stalin’s strategy to liberate Stalingrad. Today, Russian Army “barrier units” are stationed on the east bank of the Dnipro, instructed to fire on soldiers attempting to swim or paddle across the river.

On Monday, Ukrainian Armed Forces spokeswoman Natalia Humeniuk said Russian units Kherson “are trying to negotiate with the Ukrainians on surrender and transfer under the auspices of international law.” The toll-free number is taking calls.

Lenox native James Brooke has traveled to about 100 countries reporting for The New York Times, Bloomberg and Voice of America. He reported from Russia for eight years and from Ukraine for six years, coming home one year ago.