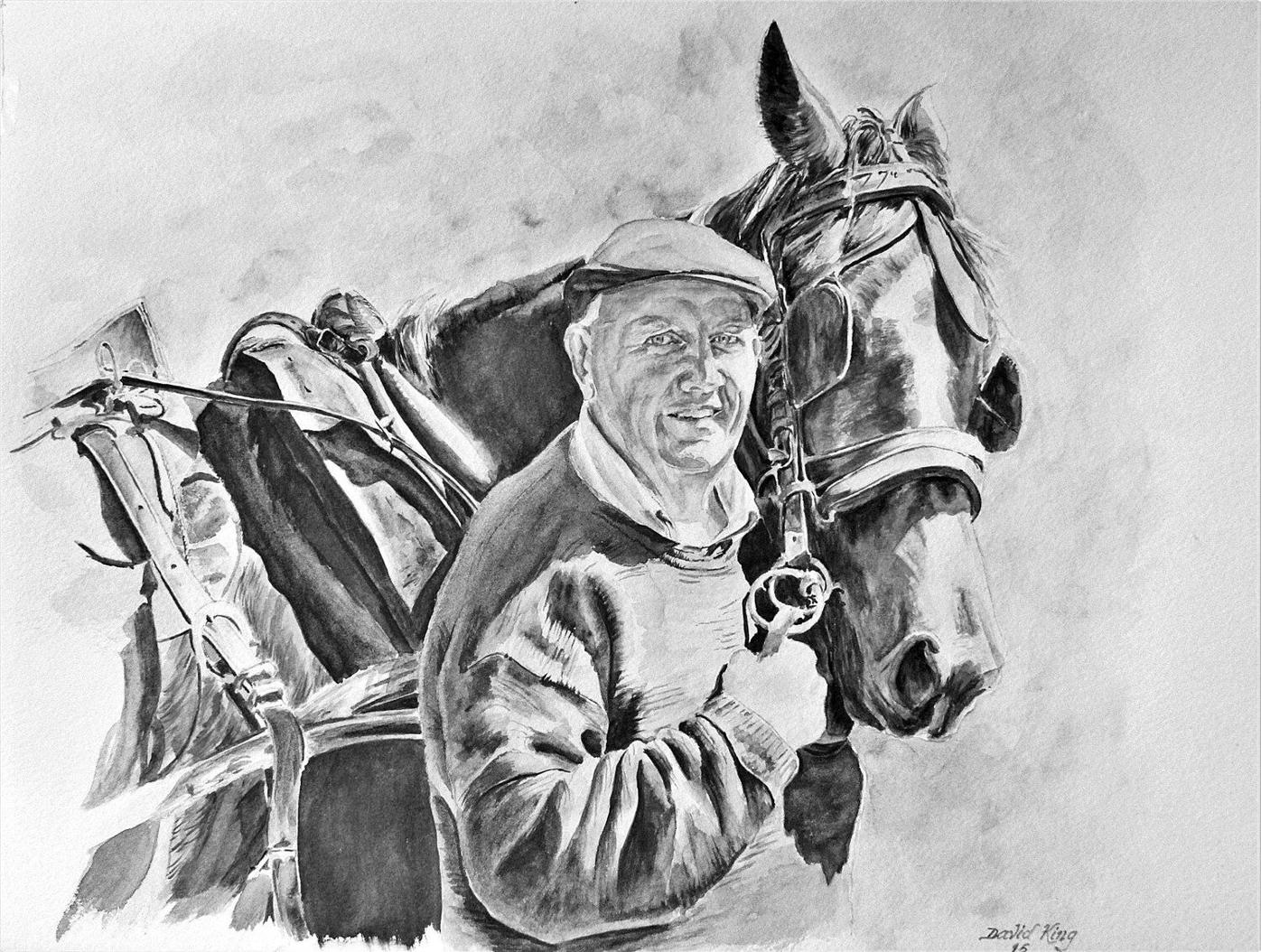 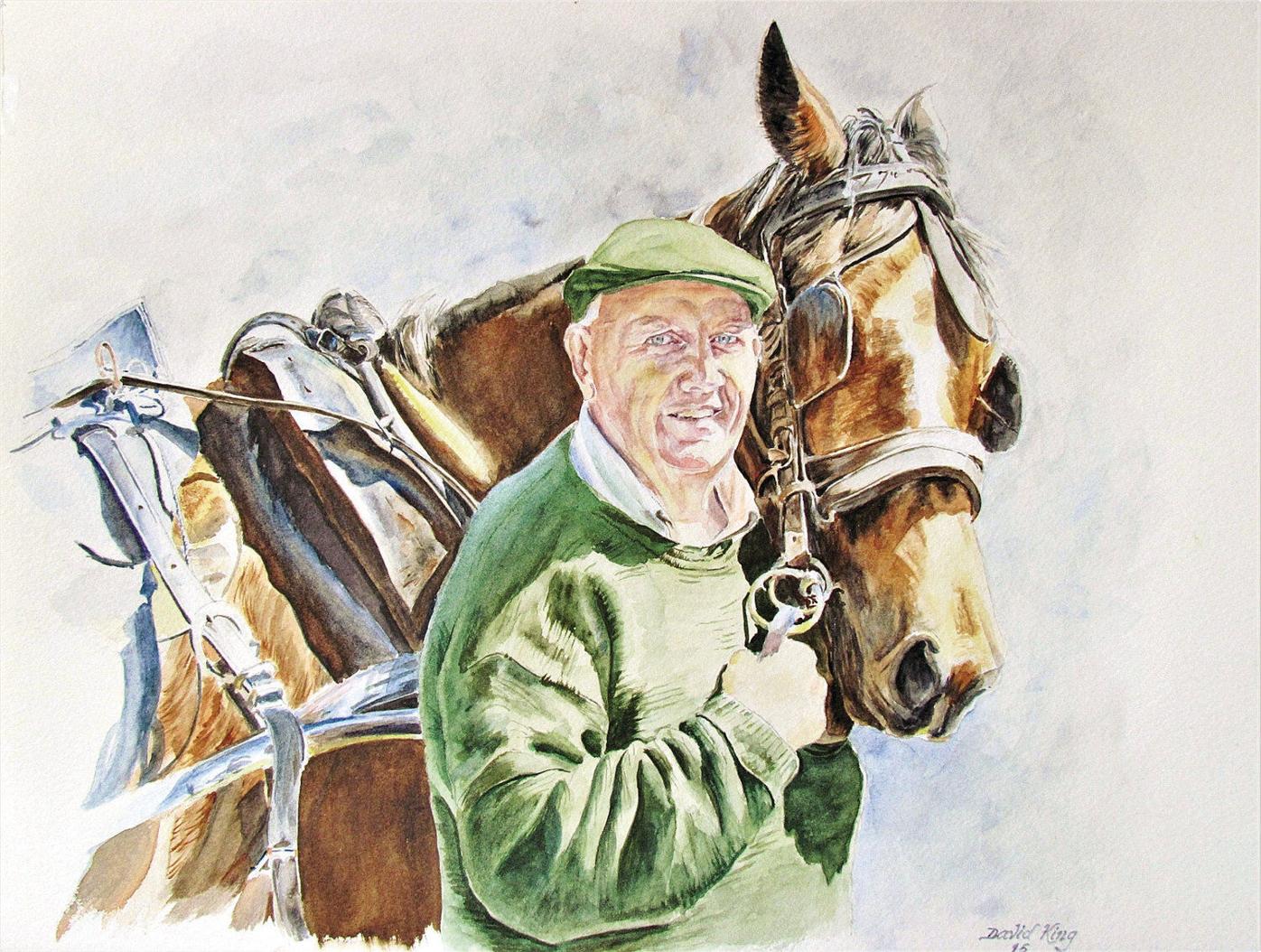 PITTSFIELD —When David and Denise King of Pittsfield visited Ireland in the spring of 2014, they took in many wonderful sights, but the picturesque town of Killarney, nestled among its famous lakes, native woodlands, and high-stacked mountains, took the prize.

While there, the Kings hopped on a horse-drawn jaunting car that takes visitors through the National Park to Ross Castle. Their jarvey (driver) was a charming elderly man who had them in stitches throughout their five-mile, 45-minute trip. They were so taken by his kindly ways that David, a skilled artist, took a photo of the amiable man with plans to paint his portrait on their return home.

The following year, David heard that I was leading a group from BMC to Killarney, and asked if I would try and locate the anonymous jarvey and, if successful, give him a print of his finished artwork. I gladly obliged.

That September, after our group had settled in at The Malton Hotel, four of us went searching the town for the unnamed horseman. We started at Hannigans Bar, where a scrum of jarveys had parked their horses and carts along the curbside.

Now I figured this tight fraternity would certainly know the jarvey in question, but I also knew they wouldn't let on without fun and games. Holding up the framed print, we approached the pack tentatively. "Excuse us, sirs, but would you know the man in this picture?"

"I've never seen that fella in me puff," replied one gangly jobber before his snickering cronies. "But I'm great pals with his horse there, Lightning. Find Lightning and I dare say you'll find your man."

After a few more bouts of malarkey, we stumbled upon our prize. "Why, that's my dad, Michael Tangney!" exclaimed his son Paul, a fellow jarvey in his 30s. When I explained our mission to him, Paul told us that Dad was currently out on a run, but promised to have him at our hotel by 6 o'clock, without spoiling our little surprise.

In the hotel bar that evening, our BMC contingent of 40 strong, led by Tom and Dianne Romeo of Lenox, let out a rousing cheer when an unsuspecting Michael Tangney entered the room with his son. After I briefly explained the back story, we presented Michael with David's handsome print. He stared at it in fascination for a long moment, before blurting, "This painting will be hanging in my sitting room by night's end!"

With a frothy pint in hand, Michael gave us a sketch of his storied life. "My own dad, Thomas Tangney, was born in the Black Valley, tucked beneath the MacGillycuddy Reeks. So remote a spot, it didn't have electricity until 1976. As a young man, he moved to this town and was hired as a gamekeeper at The Killarney House, a glorious estate of 8,000 wooded acres. Imagine, my father a gamekeeper," he chuckled, "and he the biggest poacher of all.

"Growing up, I'd often run messages for Gloria Dehaven, the American actress who resided there. She always made a fuss of my curly red hair, and surprised me with a roan pony named Harry on my 12th birthday. When school let out, I tacked up Harry to an old jaunting car and started taking visitors around the Lakes. And that's what I've been at for these past 55 years."

"Wow, 55 years!" our group collectively gasped. "How many miles do you think you've traveled during that time?"

"Have you had any famous passengers?"

"Oh, quite a few," answered the soft-spoken man. "But my favorite was Maureen O'Hara whom, you may know, played alongside John Wayne in The Quiet Man. Never did I meet a woman so kind, so generous, so down to earth as herself. Over the years we became close friends, and she'd often invite my wife Beppie and I to her lovely home in Glengarriff."

Paul shortly asked for the group's attention. "Now here's a few things my father hasn't told you. For starters, he's been a great ambassador in keeping the tradition of jaunting cars alive in Killarney. A tradition that goes back 220 years. Dad also began his own successful jaunting car business; an enterprise that my brother Mike, sister Laura, and I will carry on proudly for years to come/

"But here's the topper. It's absolutely remarkable how you folks happened to show up today with Dad's beautiful portrait, and invite us to this warm gathering. Now, one might call it coincidence or serendipity, but I'm delighted to tell you that my dear dad just retired an hour ago!"

Hearing the good news, our troops let out a rollicking cheer, as Paul saluted his father with a heartfelt lift of a glass. A simple gesture that catapulted our evening into a splendid night of unbridled merriment.

This is Kevin O'Hara's 35th St. Patrick's Day story for The Eagle. Visit his website at thedonkeyman.com