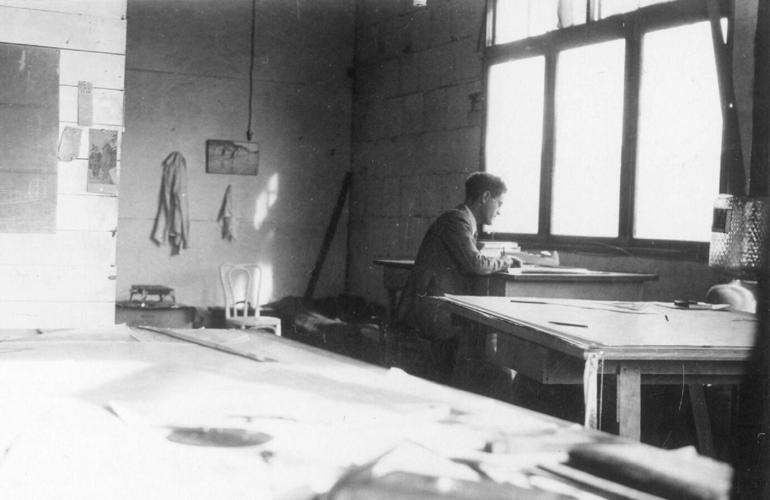 Donald A. Hall, an engineer who played a key role in designing and building The Spirit of St. Louis, works at his desk. 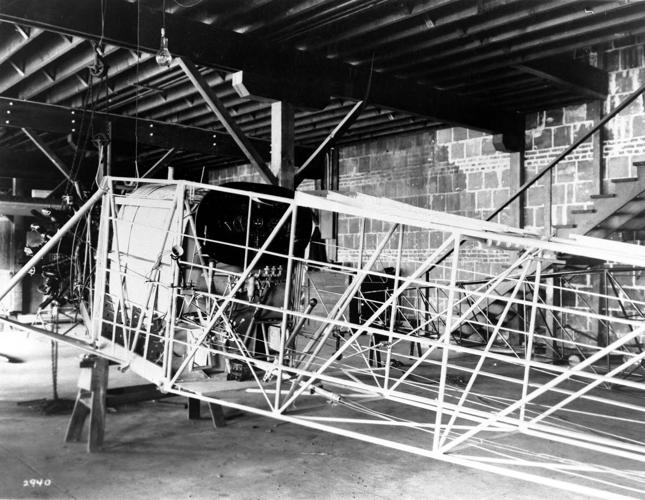 The plane that would become The Spirit of St. Louis is seen mid-construction. 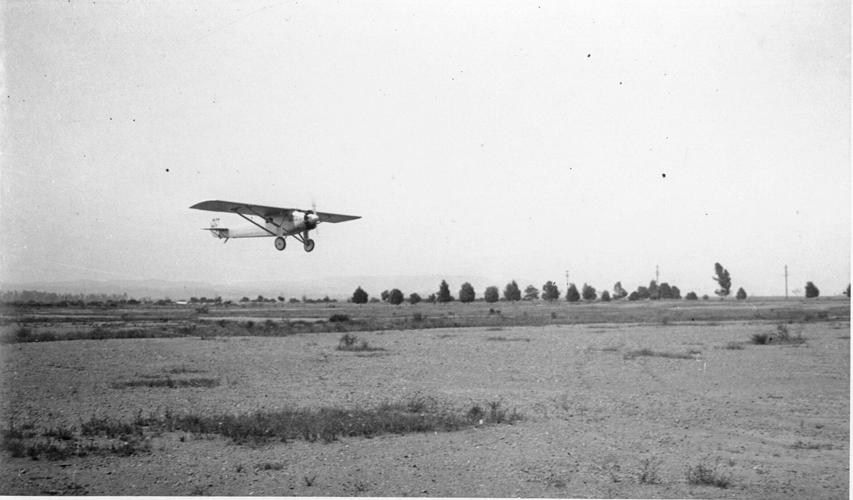 The Spirit of St. Louis is seen during a test flight.

In January 1927, Donald A. Hall was relaxing in his new office, checking his initial estimates for a custom job that had just arrived via telegram.

Donald had started as the new chief engineer for Ryan Airlines when Donald Douglas had agreed to release him from his contract in Santa Monica, Calif. Ben Mahoney, the new full owner of the small aircraft manufacturer in San Diego needed a top-notch engineer to update and develop a new aircraft. Mahoney had just bought the company outright from his ex-partner, T.C. Ryan for the huge sum of $25,000.

Looking out over San Diego Bay, Donald considered the project. A remarkable opportunity for the young aircraft engineer from Brooklyn, N.Y., it would be a competitive design meant to win the Orteig Prize to cross the Atlantic in a single flight. He had followed the competition for years. His design would be engineered for a low-altitude flight across the Atlantic Ocean. It would have to fly nonstop for thousands of miles in unknown weather conditions. He assumed it would take off from an airfield in Garden City, the location of his first aircraft job.

He had dreamed of the opportunity to build such an aircraft, though it seemed improbable that he would find himself at the center of such a major project at his age. Reading the requirements, he was confident of his ability after working on many advanced designs over the years. Lessons learned from projects at Douglas Aircraft, which had pioneered long ocean flights with the Army’s successful Douglas World Cruiser, were fresh in his mind.

Nearly a month later, he sat in his office with a tall and lanky figure. Mahoney had informed him that a “bigwig” from St. Louis would be arriving that day to determine whether he would place the order for such a plane. The “bigwig” turned out to be a pilot, young and confident in his flying skill: Charles Lindbergh. The pilot stood out to the designer, and Lindbergh appreciated Donald’s matter-of-fact scientific process to project engineering.

The two of them broke off from the owner, production manager and marketing director to drive a rusty Buick to the library to get a critical measurement. To determine the minimum fuel requirement, they needed the exact number of miles from Long Island to Paris. Donald quickly realized that with only one pilot (Lindbergh’s requirement) and 400-plus gallons of fuel, the old Ryan M-2 would never be able to hold the load without cracking up in an explosive crash.

Over the next 60 days, pencil lines curved and angled over the designer’s white sheets as he handed off part by part to his team of men and women, managed by his efficient production chief. Arriving in the mornings as the crews worked through the night, Donald would double as parts inspector, photographing the finished sections as Lindbergh roved the factory adding critical experience to the build. Lindbergh also began his navigational planning and flight practice in the efficient high-wing monoplane style of aircraft.

Through discussions and debate, the two worked out every potential hazard, including Donald’s two most significant concerns: the transcontinental flight over Flagstaff, Ariz., and long-distance pilot fatigue. He had personally experienced extreme fatigue as an army flight cadet and thus worried that the ever-confident Lindbergh couldn’t remain alert for 40-plus hours.

After watching the slender silver aircraft lift off for the first time, fuel testing, and more photography Donald was happy with his uniquely aerodynamic design. The plane worked perfectly, with plenty of reserve power for up to 425 gallons of fuel, and a stunning 4,250-mile estimated range — more than enough to reach Paris, France.

Without any more time to spare for additional testing, Donald finished his performance statistics and signed off on the job so Lindbergh could lift off from San Diego. Still in last place, the pilot headed East and successfully jumped in front of the other teams competing to win the coveted Orteig Prize. Many years later, when Lindbergh authored the Pulitzer Prize-winning book, “The Spirit of St Louis”, he would put special emphasis on his friend Donald Hall as critical in making the Spirit of St. Louis a reality.

Nova Hall is an author and the grandson of Donald A. Hall. His book “Spirit and Creator: The Mysterious Man Behind Lindbergh’s Flight to Paris,” from Safe Goods Publishing in Sheffield, tells Donald Hall’s full story along with rare photographs of the construction of the plane and its first test flight.